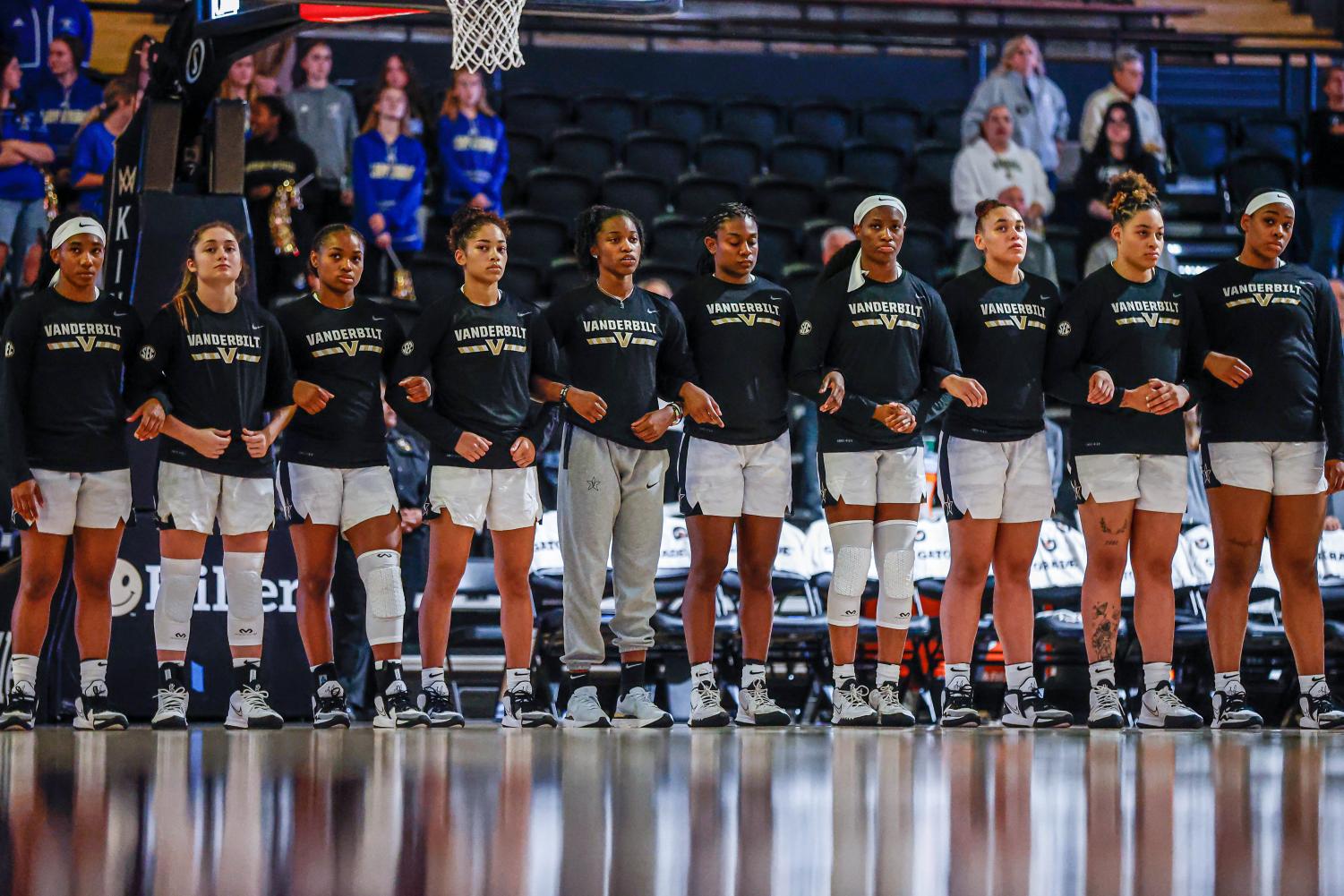 Vanderbilt lines up for the national anthem against Samford on November 11, 2022 (Josh Rehders/Hustler Multimedia). (Josh Rehders)

Vanderbilt lines up for the national anthem against Samford on November 11, 2022 (Josh Rehders/Hustler Multimedia).

In just two years, Shea Ralph’s fiery demeanor has transformed this program from SEC laughing stock to a sleeping giant starting to wrestle awake. Don’t tell her that’s a sign of progress, though.

Despite losing three projected starters in the preseason, despite coming back on the road against Columbia, despite thoroughly dominating Tarleton State on Tuesday and despite getting out to the team’s first 4-0 start since 2014, there is one common theme running throughout Vanderbilt women’s basketball program.

“I was not happy with how we started the game today, similar to how we started at Columbia,” Ralph said after the team’s win over Tarleton State. “As we move forward, that’s not the winning edge. One of the things we talked about in shootaround was that we act like winners. It never matters who the opponent is. We have to start better; we play basketball to a certain standard here at Vanderbilt.”

Keep in mind, Ralph’s crew jumped out to a 9-0 start against the Texans. They led wire-to-wire, were up double-digits by the middle of the first quarter and held Tarleton State under 50 points. They have won their first four games by an average of 22 points. To Ralph, the showing so far has been a lackadaisical effort absent of the mental focus required to win championships.

“We are working on changing that mentality as it relates to our program. When we play Vanderbilt basketball, I believe we can compete with anyone,” Ralph said.

It’s that very mindset that has fueled the Commodores to a 4-0 start, shattered public expectations so far and permeated the Vanderbilt basketball culture. In just two years, Ralph’s fiery demeanor has transformed this program from SEC laughing stock to a sleeping giant starting to wrestle awake.

That progress has been glaringly evident as the Commodores have settled into the Ralph brand of basketball: suffocating defense, a bullying offensive style and a next-man up mentality. As amazing as the results have been thus far, Vanderbilt’s schedule will only get tougher as they head to Cancun for Thanksgiving before getting into their rugid SEC schedule in the new year.

Don’t think Shea Ralph doesn’t know that, though. Forget dominating non-conference opponents in November; Ralph is focused on building for January and beyond. And for the rest of the league, and the country, that should be damn scary.

After a deep WNIT run a year ago, Vanderbilt was excited to welcome back three starters in Jordyn Cambridge, Iyana Moore and Kaylon Smith. One problem: All three suffered season-ending injuries before the team played a game.

Even with Cambridge, Moore and Smith, there were going to be a lot of new faces this season for Ralph’s program. Without them, Vanderbilt fans are getting used to those faces sooner rather than later.

First, there’s the pair of transfers in Ciaja Harbison (St. Louis) and Marnelle Garraud (Boston College). To say the early returns from the graduate transfers have been fruitful would be an understatement.

Harbison leads the team in scoring at 17 points per game, including a 27-point outburst to carry the Commodores at Columbia. She’s been an absolute tone-setter at the point guard position, averaging 6.5 assists and 2.5 steals per game thus far. The veteran presence at point guard has steadied an otherwise young Vanderbilt lineup.

Garraud, for her part, has been nothing short of the team’s Robin/Scottie Pippen (to use a Vanderbilt reference) so far. The BC transfer is averaging 12.8 points per game, good for second on the team. She’s been Vanderbilt’s most consistent deep threat, converting the three-ball at an absurd 52.2% clip so far. She’s well over the 40/50/90 threshold—a common indicator of a deadeye shooter measuring field goal/three point/free throw percentage—at a 46/52/100 mark.

“I would say we’ve been solid in terms of the things that I’ve asked him to do,” Ralph added on the veterans. “Again, I’d like our effort to be more consistent, but our veterans have played hard for the most part. But at the end of the day, we need contributions from everyone. So whoever steps up, I’m happy [whether it is a] veteran, young guy, it doesn’t really matter how old you are. But right now you know the guys that have been here for the last year and a half, they understand my expectations. I think they’ve done a pretty good job”

Then, there’s the talented freshman class, including top-100 recruits Ryanne Allen and Amauri Williams. Allen (9.0 points per game) and Williams (8.0) are fourth and fifth on the team in scoring, respectively, and have brought a level of toughness and depth down low that Vanderbilt hasn’t had in a number of years. I’d be remiss to not mention freshman Jada Brown as well, who has started each of the Commodores’ four games thus far, providing another ball-handling and defensive option for Ralph up top.

Allen, in particular, has shown flashes of becoming a legitimate stretch four that can create all kinds of mismatches for a defense. She is hitting 42% of her shots from deep and hasn’t missed a free throw yet this season, showcasing that her shooting stroke can be replicable over a full season. Allen poured in 17 points against Samford and 13 points against Tarleton State.

Sheesh, Ryanne Allen. Another 3⃣ for the freshman. Vanderbilt dominating this one now

Despite the influx of new talent, Ralph’s second team has retained the same stylistic traits that helped her first team overachieve expectations and make a postseason run. They’re mean. They’re relentless defensively. They’re going to bully you in the post. And they’re going to keep coming at you for 40 minutes.

That mindset starts with Sacha Washington, the sophomore and one of the few returners for this team. Washington has blossomed to start her sophomore season after coming into her own in the back half of last year’s campaign. The 6’2” bruiser is averaging 12 points per game and leads the team at 7.3 rebounds per game. She also leads the team in blocks with seven.

Better yet, Washington has instilled the Ralph culture of toughness for the newcomers, particularly with fellow post players Allen and Williams.

Through four games, the defensive effort—led by Washington—has been comprehensive and suffocating as Vanderbilt has held opponents to 58.3 points per game. They’ve forced opponents into 20 turnovers per game and managed six steals and three blocks per game. Like Washington, returnees Demi Washington and Yaubryon Chambers have helped carry over that nasty defensive attitude from last year’s team to this one. Washington (8) and Chambers (6) are second and third on the team in steals.

With a new cast of characters in the fold, Ralph’s squad remains the same group of ball-hawking scrappers hell-bent on making playing Vanderbilt an exhausting experience for any opponent. That’s an encouraging sign of tangible cultural progress outweighing roster turnover early in the Ralph era.

Vanderbilt has undoubtedly exceeded expectations early in November. But, as Ralph alluded to, none of that means anything yet.

The road will only get harder for Vanderbilt. Up next on the schedule is two more home tune-ups before the squad heads south for the Thanksgiving holiday. The Commodores will play host Austin Peay and St Joseph’s before the end of the week. While winnable, that will mark four games over a seven day span for Ralph’s crew. From there, Vanderbilt will head to Mexico for the Women’s Cancun Challenge. They will face off against North Carolina State on Thanksgiving to open up the tournament before competing against Northern Iowa the day after.

The challenges will ramp up for this Vanderbilt team over their next four games. Regardless of the outcome, we’ll know much more about this team by the time the next Memorial Minutes is released.