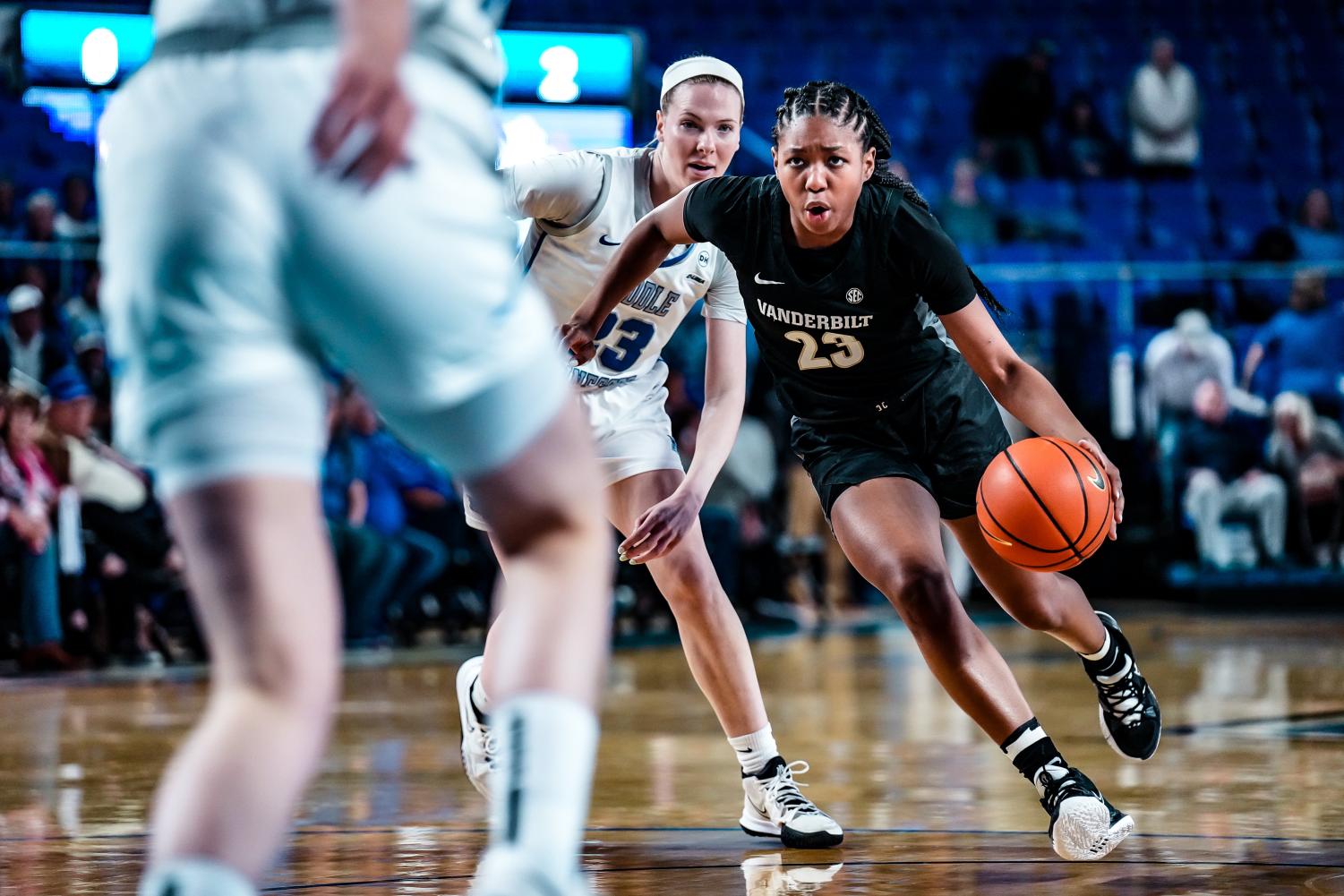 Iyana Moore drives to the basket in Round 3 of the WNIT against Middle Tennessee on March 24, 2022. (Vanderbilt Athletics)

Iyana Moore drives to the basket in Round 3 of the WNIT against Middle Tennessee on March 24, 2022. (Vanderbilt Athletics)

After last year’s season was canceled due to COVID-19, the Commodores notched their first postseason victories since the 2015-16 campaign in 2021-22.

The Vanderbilt Commodores’ 2020-21 campaign was eventually canceled due to the COVID-19 pandemic after starting the season 4-4 overall and 0-3 in the SEC . In their final game of Jan. 2021, they had just seven available student-athletes due to COVID-19 and injuries. Couple that with a number of transfers this past offseason, and it was clear that the Commodores would have their work cut out for them to rebuild a storied women’s basketball program.

Candice Storey Lee started the program’s turnaround by bringing in head coach Shea Ralph, who worked with Geno Auriemma as an assistant coach for the UConn Huskies for the past 13 years, last April. Lee hoped that with her years of experience playing and coaching for one of the most decorated programs in women’s college basketball, Ralph would lead the Commodores in a new direction.

And so far, that is exactly what she has done.

This season, Ralph led Vanderbilt to its first postseason victories since the 2015-16 campaign, and while the Commodores’ season ultimately ended in bittersweet fashion, the team has a great deal of momentum heading into next season.

This year, Vanderbilt finished the season 16-19, with a 4-12 record in conference, an SEC Tournament win and two victories in the WNIT. In the hyper-competitive SEC, the Commodores were picked to finish dead last in the preseason. But they finished 13th overall out of 14 teams, and defeated the 12th-seeded Texas A&M Aggies, 85-69, in the first round of the SEC tournament.

“Obviously disappointed for our group, but incredibly proud of how far we’ve come this year,” Ralph said after the team’s loss against Middle Tennessee in Round 3 of the WNIT. “And I’m excited about the foundation that we’ve built here at Vanderbilt.”

While the Commodores will look to improve their record next season, they consistently fought hard against high-caliber competition, had strong individual performances and at times, flashed their true potential, such as in the penultimate game of the regular season, a 63-59 victory over the then-No. 15 Florida Gators.

“It’s a historic tradition of excellence at Vanderbilt at all levels—athletically, academically,” Ralph said. “We understand how special this is and the opportunity we have to make it even more special.”

Although leading scorer and senior forward Brinae Alexander has decided to head to the transfer portal, the Commodores return a great deal of young, talented players, who flourished in the WNIT after Alexander elected to sit out the postseason tournament.

In the Commodores’ 71-45 victory over Liberty in Round 2 of the WNIT, Moore and Washington had 25 and 17 points, respectively, in a blowout win for Vanderbilt at Memorial Gymnasium. Moore shot a scorching 7-of-11 from 3 and was perfect from the free-throw line, while Washington was 44% from the field.

The two young stars complement each other well: Moore is a quick point guard who is able to manufacture points, while Washington is a reliable presence in the paint and around the rim.

While the Commodores have young talent, they also likely have experience returning to the court next season in senior Jordyn Cambridge. The Tennessean reported that she will return for a graduate year after leading the team in minutes this season, averaging 10.7 points per game and setting the Vanderbilt record for steals in a season with 130.

“I could talk about Jordyn for the next hour,” Ralph said after the Commodores’ win over Liberty in Round 2 of the WNIT. “She’s just the heart and soul of what we do. I’ve been coaching for a long time, obviously this is my first head coaching job, but this isn’t my first rodeo, and Jordyn Cambridge is special.”

After reflecting on the season, Ralph did not hesitate to share how glad she is to be a part of the Black and Gold. With Moore, Cambridge and Washington, among others, likely back next season, the Commodores are primed to take another step in the right direction.

“It has been the most special year I’ve ever had as a coach, and I’ve had some pretty cool ones,” Ralph said. “I’m really looking forward to regrouping after we take a deep breath and appreciate what this season was for us and continuing to build on the foundation that Vanderbilt basketball is now.”

The Commodores have not qualified for the NCAA Tournament since the 2013-14 season, but with the right improvements, that very well may be the expectation for next season. They will join their male counterparts in hopes of qualifying for March Madness and restoring a bit of magic to West End.

The last time both squads qualified for their respective NCAA Tournaments? The 2011-12 season, a year in which both teams advanced into the round of 32. It won’t be long before Ralph leads her team back to where Vanderbilt women’s basketball belongs in March.