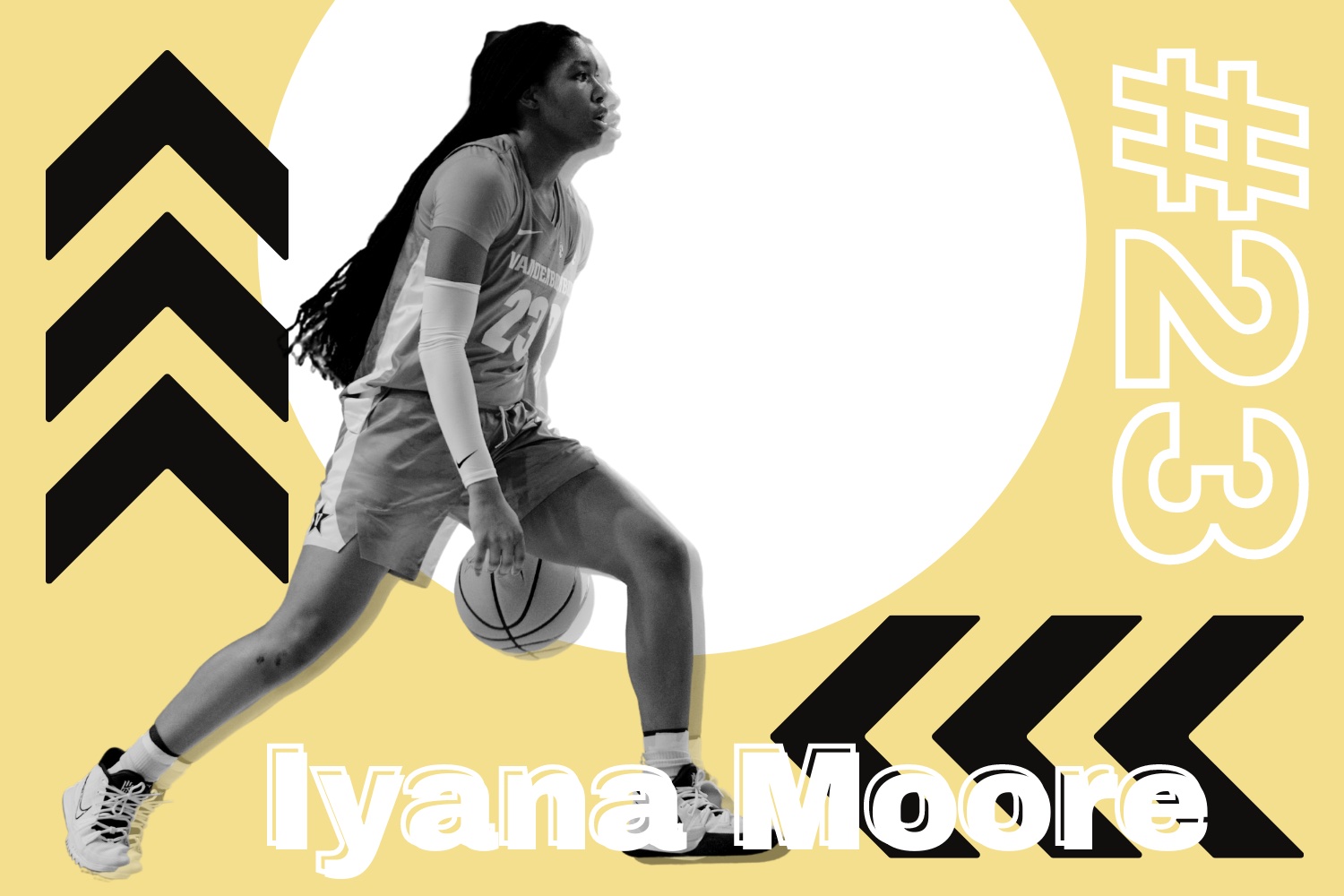 Iyana Moore has had an outstanding rookie year, demonstrating to fans the quality of basketball they can expect for years to come. (Hustler Multimedia/Alexa White) (Alexa White)

Iyana Moore has had an outstanding rookie year, demonstrating to fans the quality of basketball they can expect for years to come. (Hustler Multimedia/Alexa White)

After remaining committed to Vanderbilt through a program coaching change, freshman Iyana Moore has taken full advantage of the transition year and is introducing Commodore fans to a new standard for women’s basketball.

“I didn’t get recruited by her at all, actually,” Moore told The Hustler. “When she got the job, she just reached out to us, which was great. You got to have a conversation with her, see what her mind was at, and she was seeing where our head was at. And then when we got here, that’s when we really started building a relationship.”

Moore didn’t expect such a drastic change when she originally decided to enroll in the university, but she had a blind faith in Ralph that has paid off for both of the first-year Commodores. This experience showcases Ralph’s dedication to her players and the personal connection she can make with any passionate athlete.

Quickly, Moore felt good enough about the team’s future leader and Vanderbilt’s other offerings to come aboard a rebuilding process that has been, overall, very successful in its first campaign.

“I get a chance to be a part of something that’s in the rebuilding process,” Moore said. “It’s close to home—it’s in my backyard, and my parents get to see me play. And, it’s in the SEC—you don’t get much better than that. Down the street. Great education.”

Naturally, Ralph’s close connections to her players were extremely enticing for Moore, whose family is her biggest supporter.

All of her support systems have allowed Moore to shine in Nashville. However, the first time Moore truly put college basketball on notice was against Alabama State when she broke Vanderbilt’s single-game record for made 3-pointers.

Prior to the team’s matchup with the Hornets, she had been averaging just under 10 points per game—certainly nothing to scoff at. But, against Alabama State, she tripled her expected total, scoring 32 points on 9-of-12 shooting from deep.

“Honestly, I just felt like it was another game that I had to go play. I didn’t even know what the record was before, and I didn’t know what number I was at during the game. I just knew I was feeling it, and it was coming to me so I just kept shooting it,” Moore said. “It was more after [the game] when it sunk in. I was like, ‘Oh, I really just did that.’”

As the season went on, the freshman shifted from her original role in the lineup as a 3-and-D specialist to a versatile attacker with a tenacious defensive mindset. It was almost as if she was becoming a byproduct of senior Jordyn Cambridge’s stout defense and senior Brinae Alexander’s offensive arsenal.

As the end of the team’s regular season nears, Moore’s statistics show a player beyond her years, ready to take on a leadership role in upcoming seasons. She sits second on the team in points per game with 12.1 per contest; she is shooting 36.1% from beyond the arc and 79.7% from the charity stripe—both team-highs for those who have taken more than 10 such shots; she has played the second-most minutes on the team, dished out the second-most assists with 68 and even snagged the third-most steals—47 for the season.

For each of these categories, the only players ahead of Moore are, evidently, Cambridge and Alexander, both of whom will be moving on after this season. Consequently, it seems as if Moore will have a chance to step into the spotlight next year—only her second as a Commodore. The good news for the program is that she will undoubtedly carry on the strong team culture Ralph has begun building.

Moore’s goals at Vanderbilt are all team-focused. She has bought into Ralph and her spirit and has been rewarded with a stellar freshman showing. Though Moore will unquestionably change and adapt her game as her role on the team transforms, she also wants to remain steadfast in her aspirations to impressive group accolades.

“[Success is being able to] say that we’ve gotten better, that we learned something each and every game and that we haven’t taken many steps backwards,” Moore said. “The biggest goal I have is just to help the team be better, help the team go as far as we can and try to help people on our team individually become a better person.”

Moore and her Commodore teammates will have an opportunity to shock the world starting this Wednesday, Mar. 2 at 11 a.m. CST, as they take on Texas A&M in the first round of the SEC Tournament. If they win, they will play Florida in a rematch of Vanderbilt’s biggest win of the season.

The Commodores will hold a home-court advantage for the game as Nashville’s own Bridgestone Arena is the primary venue for the women’s tournament. Moore, who was recently named to the SEC’s All-Freshman Team, will look to close out one of the most exceptional first years that Commodore fans have witnessed in a long time with a few more wins.