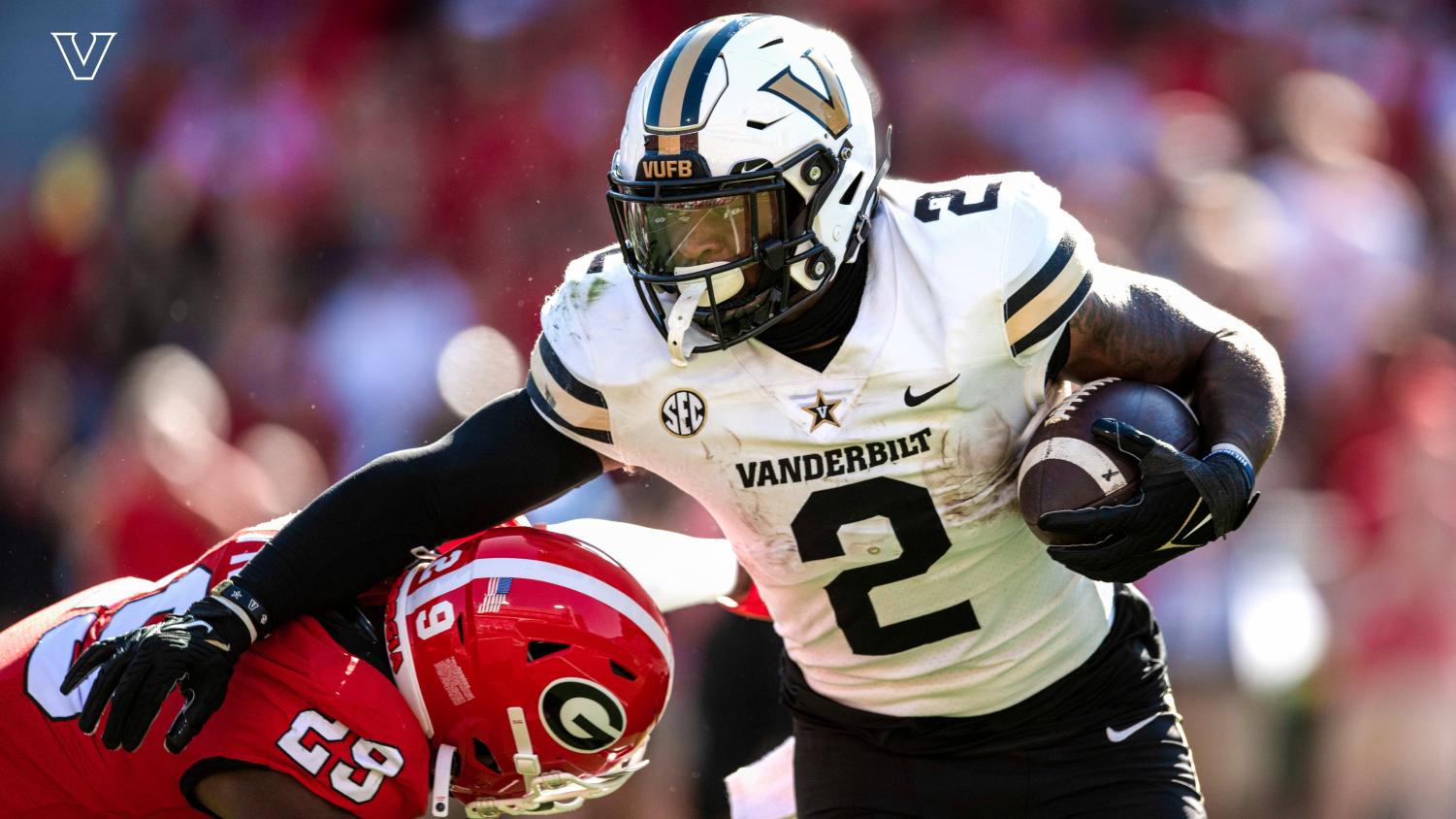 After a brutal stretch in their schedule, it’s time for the Commodores to regroup and move forward.

“You can only play who’s on your schedule” is a common saying in football. It’s usually used to describe situations where teams are accused of over-performing in terms of record because they have a weak set of opponents. It doubts a team’s true quality because of questions about the skill level of their opponents.

In these past couple of weeks, I feel like a similar situation is playing out with Vanderbilt, except there are no questions about their opponents. Before this tough slate of games, the first month of football on West End was great. There were ups and downs, but watching the growth the Commodores have made in just the second year of Clark Lea’s tenure was exciting. It really felt like the Commodores were building something.

Unfortunately for the Commodores, their schedulers did not do them any favors after their promising start. After closing the first month of the season with a 3-1 record, the Commodores have run into three powerhouse programs, with Alabama and Georgia being in college football’s elite class of true national title contenders. Those two games have gone as poorly as anticipated, with the Commodores falling to the Crimson Tide 55-3 and now losing 55-0 against the Bulldogs.

From the opening kickoff, it felt as if the Commodores were smothered by the Bulldogs. In the end, Vanderbilt registered nearly as many punts (7) as first downs (10). Georgia’s well-oiled machine was churning on Saturday afternoon, led by a re-energized Stetson Bennet and dominant defense. The Commodores’ offense simply had no answers against a defense littered with NFL talent, going three-and-out on 6 of their 11 drives. The story was not much different for the Commodores’ defense, which allowed 579 total yards and 55 points to the Bulldogs. Vanderbilt found themselves down by 28 by the end of the first half and finished without scoring a single point for the second straight game against Georgia. Not great.

Yet, I don’t think the glimmer of hope that the Commodores have afforded fans this season should be dimmed because of these past few weeks. Losses to Alabama and Georgia in lopsided games should not determine whether or not this program will continue to ascend under the watch of Lea. Performances like last week’s against Ole Miss perfectly encapsulate where Vanderbilt is currently: a hungry and talented team that needs some time to continue to develop. The Commodores had an undefeated and consensus-ranked top-10 team in Ole Miss on the ropes for an entire half of football last week, but couldn’t figure out how to hold off their second-half surge. That showing from Vanderbilt is much more telling about where they are as a program than a loss to last year’s national champions.

“Part of the challenge now is accepting the result as an indicator of where we are, but not where we are headed,” Lea said after the game.

Let’s hope that where they’re headed is the rhythm they found in the opening weeks of the season. Now, let’s dig into this week’s Brunch menu.

From early on in Vanderbilt’s season, it became apparent how the Commodores were going to produce points on the offensive side of the ball: pounding the rock. After amassing over 400 rushing yards in their opener against Hawaii, the Commodores were able to rush for over 110 yards in their next three games. Since then, Vanderbilt’s running game has slowed dramatically, something shown best by their ground game only being able to gain 45 yards on 23 carries against Georgia.

Even taking out their massive performance against Hawaii, Vanderbilt has rushed for over 170 yards in their two other victories this season. In the team’s four losses, they’ve averaged just over 70 yards per game on the ground. It’s clear that their offensive recipe needs to be more centered around a strong rushing attack with a complementary passing game.

Amid the offensive struggles, the Commodores need to get back to their original identity and figure out ways to move the ball on the ground. For Vanderbilt, this could mean involving running back Patrick Smith more. Since returning to the team after fighting injuries in the season’s opening weeks, Smith has been given just 15 carries and has not been able to establish a rhythm in the Commodores backfield. As we covered in the pre-season, Smith is a runner with quick-twitch athleticism and a great ability to beat defenders in space. For offensive coordinator Joey Lynch, involving Smith in more spread rushing concepts and getting the running back on the outside may be a great complement to the hard-nosed rushing style of Ray Davis. Getting Smith more snaps in the backfield next to Swann could be a recipe to re-establish Vanderbilt’s rushing attack.

Speaking of Swann, let’s look briefly at his performance on Saturday. As much as anything else, Vanderbilt’s season is about finding out what they have at quarterback. After the switch was made by Clark Lea following Week Two, the freshman has given the Commodores great early returns. The former four-star recruit has looked composed and shown his ability from the pocket on multiple occasions this season. Despite completing just over 50% of his passes on Saturday, Swann showed promising signs in his third SEC game.

For one, the freshman completed the game without committing a single turnover against the best defense in college football. Through six games, he hasn’t thrown a single interception, a statistic that is truly remarkable considering the SEC talent that he has come up against. At such an early point in his career, it’s already clear that Swann is an excellent decision maker and will protect the football, a quality that many quarterbacks are not able to find years into their college careers. For a team building towards the future, Swann’s ability to play clean football is extremely promising.

Swann also continued to showcase his accuracy on Saturday, making a variety of difficult throws despite a hounding Georgia secondary. His best of the afternoon may have come on an incompletion in the first quarter, where he nearly connected with Will Sheppard. Swann placed a beautifully-lofted ball over the outstretched arms of Georgia’s star cornerback Kelee Ringo down the sideline, but Sheppard bobbled the pass and was unable to come down with the catch. If Sheppard had been able to make the catch, Vanderbilt may have had a 75-yard touchdown pass to add to his quarterback’s stat line. Regardless, Swann was able to connect with Sheppard on a few passes, further establishing the duo’s chemistry. Sheppard, the SEC’s leader in receiving touchdowns, finished the afternoon with three catches for 45 yards, including a great leaping catch over the middle in the second quarter.

Unlike Sheppard, Swann’s freshman counterpart Jayden McGowan was limited to just seven yards on two receptions in the matchup. A rising star in Lynch’s offense, McGowan has carried a huge load in Vanderbilt’s offense thus far and has established himself as a dynamic weapon with nearly 400 receiving yards. Considering McGowan’s elite playmaking ability, I was surprised to see the freshman not used in more designed plays, including screens and jet sweeps. McGowan is simply too dangerous of a weapon to be underutilized, and I would expect him to re-assert himself in this offense in the coming weeks.

As Vanderbilt’s offense looks to get back on track following this stretch, relying on the running game and outside playmakers in Sheppard and McGowan will be key.

Over its past three matchups, the Vanderbilt defense has allowed an average of 54 points per game. That definitely does not seem like a winning formula. Put simply, the defense has been poor in every facet.

Georgia’s aerial threat was just too much for the Commodores to handle, with 6 different players hauling in more than 35 receiving yards. Bennett was one step ahead of Vanderbilt’s defensive gameplan, and it showed, with the senior quarterback finishing with 298 total yards and 2 touchdowns. The story on the ground for Georgia was similar, with no player eclipsing 50 yards rushing, but the team totaled 192 yards and 3 touchdowns. For the season, the Commodores are averaging just over 162 rushing yards allowed per game.

Through seven games thus far, defensive coordinator Nick Howell has only been able to hold a team under 28 points once (Week Zero versus Hawaii). That’s concerning. As Lea mentioned in his Georgia postgame press conference, many of Vanderbilt’s issues stem from an inability to generate pressure without sending more than four rushers. When Howell dials up blitzes, the Commodores have been able to find some success getting home, like Kane Patterson’s sack on Bennett in the third quarter.

But the results have been few and far between. In the team’s last four games, Vanderbilt has three total sacks. With that being said, I’m curious to see if Howell makes any defensive adjustments moving forward. Sure, the schedule lightens up, but generating pressure and winning at the point of attack in the run game was never a true strength of this defense, and it’s shown in this past month of football. Playing a more aggressive brand of defense featuring more press coverage and disguised blitzes is possible, but it might create more issues than it solves. I’m not quite sure of the solution, but Vanderbilt’s problems on defense are persistent.

Light at the end of the tunnel

The Commodores are finally through the worst of it. Vanderbilt has their best chance to snap their 24-game conference losing streak next week, when they’ll take on Missouri on the road. After starting the season 2-1, the Tigers dropped their third straight game last weekend to Florida to land them at 2-4. If Vanderbilt isn’t able to get their conference win in that matchup, they’ll get two more chances at home against South Carolina and Florida in a few weeks time.

Sitting at 3-4, things genuinely are looking up for the Commodores. Putting this past stretch of games aside, it’s important to remember the strides that Vanderbilt has taken as a team this year. Winning four, or maybe even five games, would be a huge step up from where this team was a year ago. Commodores fans may cringe when they hear the word “rebuild” being thrown around, but it seems like, this time, Vanderbilt selected the right man to lead the job.

It’s important that Vanderbilt is able to regroup and doesn’t let this past rough stretch of games define their season. Considering the change that Lea has been able to make in a short time, I’d be surprised if the Commodores didn’t bounce back and play competitively in most of their games down the stretch. There’s a new energy on West End.

“Moving beyond this quickly, but also taking the learning from this is important,” Lea said after the Georgia game. “We’ll be ready to go on the road next week to face another SEC opponent.”