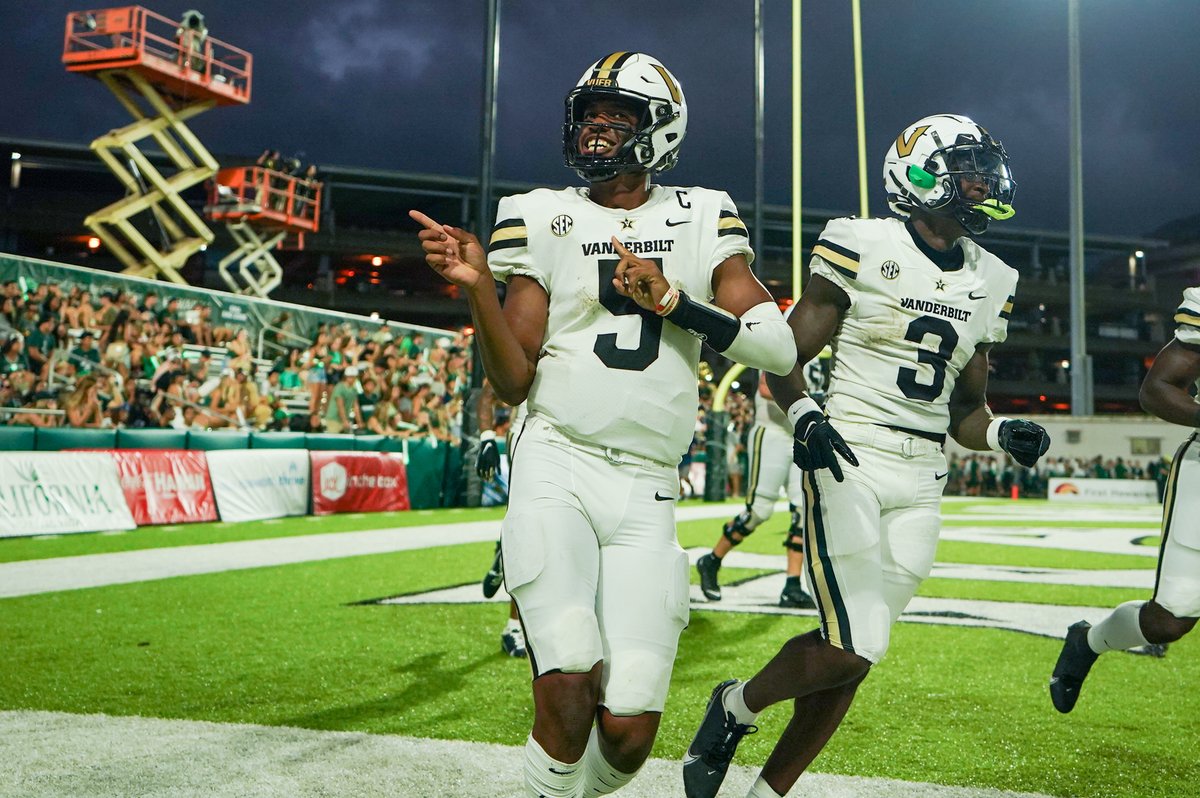 Mike Wright and Quincy Skinner celebrate on Saturday after a 63-10 victory over Hawaii (Vanderbilt Athletics).

Vanderbilt thoroughly pummeled Hawaii on Saturday night behind a strong ground game and attacking defense to improve to 1-0.

Five minutes into the season opener, a familiar sense of dread crept into the minds of Commodore fans. Vanderbilt—9.5-point favorites at the time of kickoff—found themselves down a touchdown two minutes and 42 seconds into the game after allowing an 8-play, 75-yard drive on the opening possession.

Hawaii converted two 3rd downs on the drive, picking up five chunk gains of more than 10 yards. The Commodores followed that momentum up with a mystifying sequence that included a false start and a personal foul penalty, ending with a punt.

After the Commodore defense gave the ball back to the offense, Vanderbilt turned it over on downs, failing to convert a long fade route to Will Sheppard and 4th and short. All momentum sided with the Rainbow Warriors after about as poor of a start as imaginable.

But then, something very different happened.

Unlike last year’s meltdown against ETSU, Vanderbilt was resilient and responded with a coherent plan. The ‘Dores played complementary football and worked the strengths of their personnel. In the end, Vanderbilt beat down on an inferior opponent and didn’t let up until the final whistle, annihilating the Rainbow Warriors to the tune of a 63-10 victory.

“I feel like we have a team that came out and handled some early adversity, and I thought we really played well as a team,” head coach Clark Lea said. “I was excited to see them battle back. I thought from the pain that we experienced a year ago and having early setbacks, there was a different feel on the field. The team responded.”

Quarterback Mike Wright led a potent rushing attack that was as productive as any in any game Vanderbilt has played in recent (or not so recent) memory. In all, the Commodores picked up 404 yards on the ground and averaged 9.2 yards a rush.

The defense also held up their end of the bargain, allowing just three points over the final three and a half quarters of the contest. They had two scoop and score touchdowns and finished with three sacks and seven tackles for loss.

“Everything’s personal this year, I don’t know how else to put it,” safety Maxwell Worship said after the game “Honestly, I wanted 70 points on the scoreboard. I wasn’t satisfied.”

Lea and company officially have this team in prime position to start 2-0 for the first time since 2018, should they take care of business next week against Elon. If they can do that, the Commodores will welcome Wake Forest to town in Week 3—with SEC Nation on campus—and as much palpable buzz around the program as there has been in years.

This week’s Brunch menu is as tasty as it has been in quite a while.

The most definitive mark of Vanderbilt’s dominance on Saturday night was a ground attack that absolutely pummeled the Rainbow Warriors all evening. Offensive coordinator Joey Lynch utilized a mix of an RPO (run-pass option) and triple-option attack that worked brilliantly. Vanderbilt picked up 601 yards of total offense, 28 first downs and 8.3 yards per play. The Commodores controlled tempo, won time of possession, were a perfect 6-for-6 in the red zone and didn’t allow a sack.

For Commodore fans, this has to be a welcome sight. With Wright under center, Lynch tailored a game plan to the strengths of his personnel and wore down the Rainbow Warriors over time. He got the ball in the hands of his best players and left them in space to create mismatches for the Hawaii defense. And, aside from some early hiccups and play-calling oddities, the plan of attack was cohesive and built upon itself.

“We had early success with our offense,” Wright said after the game. “We caught a flow, and we just stayed true to the game plan. That’s all we were out there to do.”

In total, the Commodores rushed 44 times for 404 yards. Wright, Ray Davis, Rocko Griffin and Chase Gillespie all galloped for more than 60 yards, with Wright pacing the group after a 163-yard, 2 TD effort. Vanderbilt mixed in some Jayden McGowan as well, getting the freshman involved on jet sweeps and triple option end-arounds.

I said it pregame and I said it on the podcast this week, but it bears repeating: For Vanderbilt to be at its best in 2022, running the air out of the ball is their best strategy. To see Lynch and the offense do just that—and to an extent that was better than I even imagined—made me confident that this staff understands their roster and how to extract the best from it. Consistently getting the ball in the hands of four of the best playmakers on the offense represents that understanding—and this performance was without Patrick Smith playing a snap (he was deemed “unavailable” by Lea postgame).

The offensive line deserves a ton of credit as well. The unit wore down a Hawaii front littered with Power 5 transfers and allowed the backfield time and space to operate. Despite losing starting center Julian Hernandez during the contest (deemed a day-to-day injury), the group didn’t allow a sack either.

In all, it was an absolutely dominant effort in the trenches that provided something tangible on which to build. Better yet, the ground success allowed Wright to make easy throws to open receivers and not play outside of himself. He finished 13-21 through the air with 146 yards and 2 touchdowns to Sheppard.

Every good run game needs a strong defense to complement it, and, on Saturday night, that combination worked like a charm for Vanderbilt. After allowing an early score, the Commodore defense began to flip the momentum of the game after forcing a three-and-out and a turnover on downs on back-to-back possessions.

The theme defensively for Vanderbilt was new faces making plays (and play calls in Nick Howell’s case) all over the field, with improved veteran leadership to carry the unit.

Maxwell Worship got the party started on defense with a beautiful read-and-react forced fumble on the opening play of Hawaii’s third drive. Worship’s hit careened the ball high into the air, where it fell into the waiting hands of Anfernee Orji who returned it for a touchdown.

Those two veterans—Worship and Orji—looked visibly more comfortable in Howell’s scheme than in previous seasons and were impactful all evening. Worship led the way with seven tackles and also had a fantastic pass breakup in the end zone. The Rainbow Warriors settled for a field goal on that drive and didn’t score for the rest of the contest.

Howell, Vanderbilt’s new first-year defensive coordinator from the University of Virginia mixed up blitzes and dialed up more pressure than I can recall seeing at any point last year. The Commodores tallied three sacks, seven TFLs and five QB hits, mucking up whatever the Rainbow Warriors were trying to get going. They added another scoop and touchdown in the third quarter, courtesy of Elijah McAllister and CJ Taylor.

“The two defensive touchdowns are a product of us flying to the ball,” Lea said postgame. “Good things happen when you play with great effort—total effort is what we say. I did feel like there was a physical edge that we were playing [with]. It was frustrating early on. The ball was finding puncture points, but even on some of the conversions they had, I felt like they were met immediately with a physical tackle. I thought Max Worship had a really good night that way.” 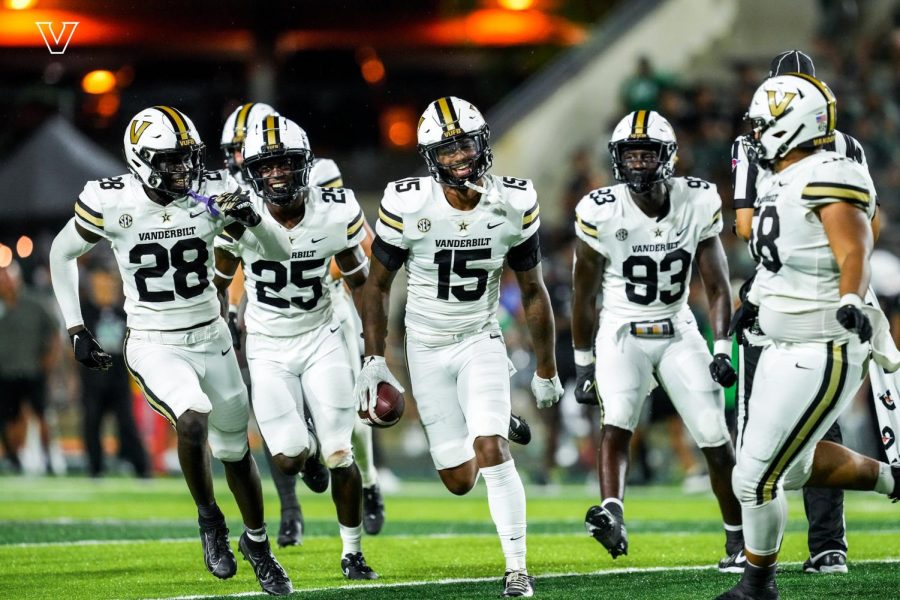 BJ Anderson, fresh off an impressive camp, recorded a sack from his corner position. The Patterson brothers, Kane and Langston, each made plays recording a TFL and a QB hit, respectively. Top-recruit Darren Agu was noticeably quick at the STAR position, registering two QB hits.

This team was clearly a defensive unit with improved talent across the board from last season. And while it is still too early to say, Lea and Howell might combine to form a better play-calling duo than we saw last season as well. As the group continues to gel and face improved opponents, we will continue to learn more, but Saturday night certainly left me excited to see that development.

Perhaps the most unexpected aspect of Vanderbilt’s win on Saturday night was not that the Commodores covered the spread, but that they thoroughly beat down an opponent, on the road, after a week filled with distractions. This game was a thumping, a blowout, a thorough victory over an opponent that was no match for the talent and speed of the Commodores.

Vanderbilt is usually on the other end of those contests.

Yes, it’s Hawaii. Yes, it was the Rainbow Warriors’ first game after a tumultuous off-season. First game with a brand-new head coach. First game after settling a four-way quarterback battle that lasted well into August.

But hanging 63 on an opponent? Racking up 600 yards of offense? Coming out of the locker room at halftime and winning the third quarter 35-0? Getting the entire backup unit into the game halfway through the second half?

That means something. And the list goes on. This matchup was as complete of a football game as I’ve seen in my four years at Vanderbilt, even if Mo Hasan led a miracle victory over Missouri that one time (the only SEC win I’ve seen in those same four years).

“I’m beyond happy for them to get this result. It feels good to win. Winning is hard to do, and when you take on a road trip like we took on here in Week 0, there are a lot of things that go into this game outside of the actual game,” Lea said. “I was really, really pleased with the way this team handled the trip. I felt the energy that they showed over the last 48 hours was remarkable, and I think that showed up in the game today.”

For Vanderbilt, this game is just the beginning of a long year. There are going to be lumps and maybe a game or two where the Commodores are on the wrong side of this result (looking at you, Week 5 trip to Tuscaloosa).

But Lea coming into Week 0 and winning in this fashion announces that he has this program at least starting to turn in the right direction. And maybe, just maybe, it’ll be sooner than any of us thought.