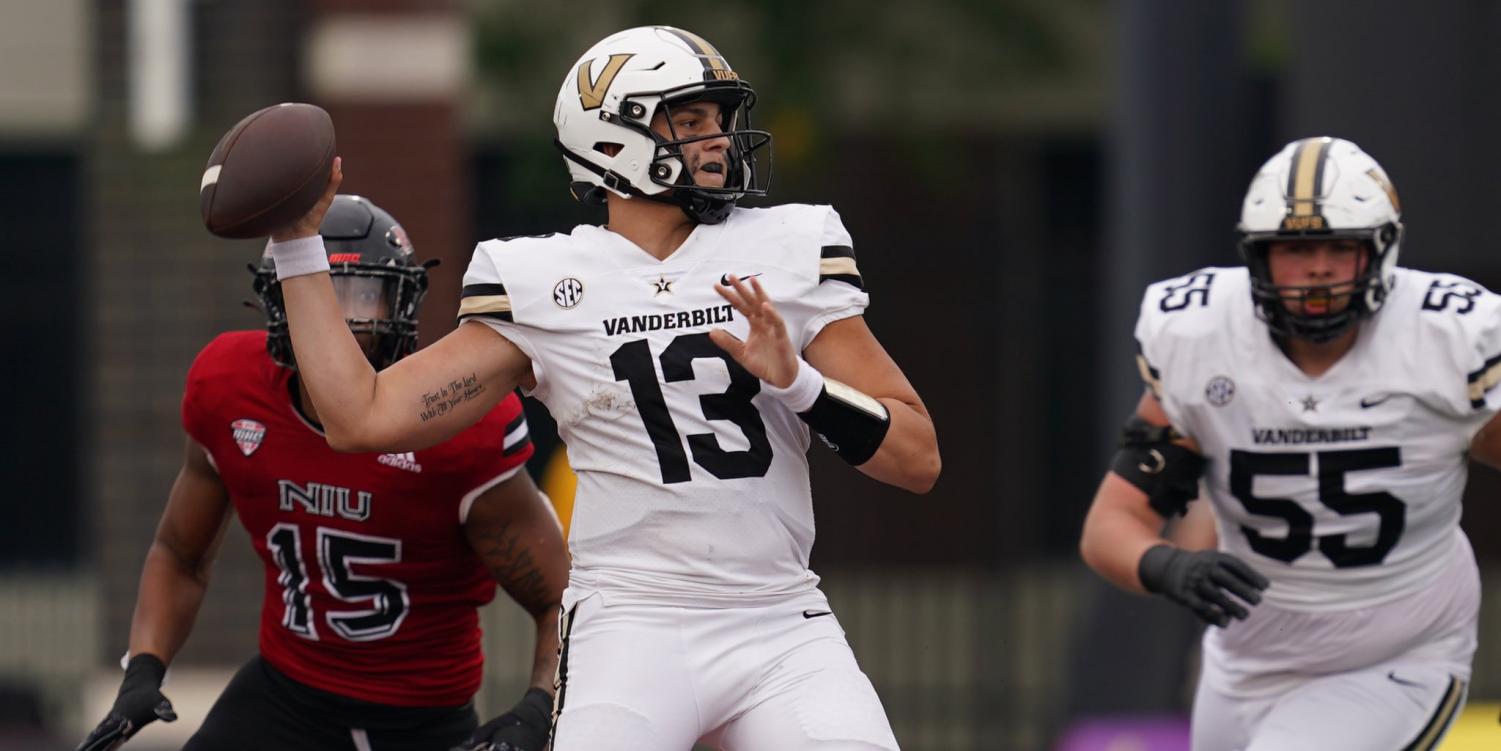 After a quarterback swap and a resilient comeback on the road, there is legitimate hope on the horizon for Vanderbilt’s program in the second year of Clark Lea’s tenure.

Last week, I ventured to say that Clark Lea had created a quarterback controversy within his program with the insertion of freshman AJ Swann halfway through the second half of the team’s loss to Wake Forest.

“The decision to bench Mike Wright mid-game, coupled with the immediate success that Swann saw upon entering the game unfurled a full-on quarterback debate for the Commodores, whether Lea wants to admit it or not,” I hedged.

After giving no indication of such thinking, Lea and his staff elected to start Swann against Northern Illinois (NIU), relegating supposed starter Mike Wright to the bench—likely for good. The change is a seismic shift in Lea’s Vanderbilt tenure and one that announces what he has been building towards since he stepped foot on West End: The future is now.

“We weren’t playing well enough on offense to not look at what we could do moving forward. We have an ‘earn it everyday mindset’ and we knew we needed to see if there was an answer for us to loosen the box to get momentum and extend drives,” Lea told “The Tennessean” after the game. “After Wednesday’s practice, Coach [Joey] Lynch and I met and made the decision”

About halfway through the third quarter, it looked like that decision would be one with more future benefits than current payoff. Despite a successful opening two drives, Vanderbilt found themselves down 28-14 to the Northern Illinois Huskies with just a little over nine minutes left in the quarter. The Commodores had punted twice and lost a fumble on their three drives since the end of the first quarter.

On the ensuing possession, Swann drove Vanderbilt down to the NIU 21-yard line before the Huskie defense made a vital 3rd-down stop. With their backs against the wall on fourth down, Vanderbilt made a gutsy decision to go for it. Much like the gutsy decision to start Swann, it was the right one.

The freshman dropped back for a second before a herd of Huskies came charging toward him. Swann rolled right, magically evaded his way out of a sack and kept his eyes downfield. Moving to his left, Swann lofted a perfect 40-yard touchdown pass to Ray Davis with the flick of his wrist.

AJ SWANN ARE YOU SERIOUS?!?

The freshman QB somehow escapes and throws a dime for the @VandyFootball TD pic.twitter.com/E4e5n9lCUA

It was mesmerizing, fantastic and impactful to the outcome of the game all at the same time. The play single-handedly turned the momentum of the game—and more than that, the trajectory of this program.

The way that it came from an uber-talented true freshman on 4th down with the Commodores down 14 points is emblematic of where this program has come. The subsequent dominance that followed, including two more Swann touchdown passes in a 38-28 win, is a sign of where this program is going.

“There’s a moment there where you really feel the momentum of the game shifting and what we’ve talked about all week as a team is we had a chance a week ago against Wake Forest to play to a win, but when bad things happen, they snowball. We have to be a team that can step onto the field and shift the energy of the play,” Lea said. “We were able to do that.”

For the first time since 2017, Vanderbilt is 3-1. The Commodores have eclipsed their win total for the past two seasons combined midway through September. The SEC, and particularly the SEC East, looks weakened relative to usual standards, giving the Commodores hope that a fourth (dare I say, fifth) win is somewhere on the horizon. A month into the season, that feeling tastes pretty good. On to this week’s Brunch menu.

Fork in the road

Lea had a choice to make following his team’s loss to Wake Forest last week, 45-25. Despite Herculean efforts in the Commodores’ first two games, incumbent starter Wright had been upstaged by backup freshman Swann. Lea, though, affirmed in his weekly Tuesday press conference that the swap would not be permanent—Wright would be given his spot back for the Northern Illinois game.

“[Wright] had a number of really special performances for us this season. He knows, and I’ve said this before, it’s ‘an earn it every day mindset’ for each position we play. That’s all a part of the build of this program,” Lea said. “But, I’m excited for Mike to come on this week and to get dialed into what Northern Illinois presents as a challenge and where we can be better.”

I guess we were supposed to take “earn it every day” incredibly literally.

After the game, Lea remarked that Swann was confirmed as the starter on Wednesday afternoon, just one day after the press conference. Swann took the first snap on Saturday against Northern Illinois and every snap for the rest of the game.

With that, Lea officially planted his stake in the ground: AJ Swann is Vanderbilt’s QB1 until proven otherwise. And that might be a while.

The freshman immediately proved why.

With Swann under center, Vanderbilt’s offensive attack completely opened up: The Commodores were no longer as strictly reliant on the run game as they had been this season so far. Seven different Commodores were targeted on Saturday.

Swann finished the game 18-28 for 255 passing yards and four touchdown passes—one short of the Vanderbilt single-game record (5). In his first career start, he put together one of, if not the, best games a Commodore quarterback has had this side of Kyle Shurmur. The composure and swagger from the young freshman served as a catalyst for a revitalized offense that finished the game with 428 yards of offense and scored 24 points unanswered.

Along the way, he unlocked Vanderbilt’s top pass catcher: Will Sheppard.

The duo was special on Saturday, giving the Huskie defense absolute fits. Sheppard reeled in 10 catches for 171 yards and two of Swann’s four touchdowns. The junior currently paces the NCAA in receiving touchdowns with seven. Sheppard has notched a touchdown in five consecutive games.

The effort caught the attention of pass-catchers far and wide, including Dallas Cowboys legend Dez Bryant.

Now firmly entrenched as QB1 for the foreseeable future, the progression of Swann is the single most important development over the rest of the season. There will be bumps in the road, but after yesterday’s performance, it’s clear that the fireworks could come sooner than expected from Vanderbilt’s starting quarterback. How’s that for a change?

All was not well for the duration of Saturday’s contest. In fact, for much of the second and third quarters, things were downright bad for the Commodores.

After an impressive opening sequence that saw Swann lead the offense down the field for two touchdowns on Vanderbilt’s opening two drives, the Commodores were outplayed for the better part of 20 minutes.

Northern Illinois went on a 21-0 run over that time span, mounting touchdown drives of 75, 81 and 75 yards in the process. Vanderbilt punted, ran out of clock at halftime and fumbled in that same stretch.

Behind the arm of backup freshman quarterback Ethan Hampton (starter Rocky Lombardi left midway through the second quarter with an injury), the Huskies sliced right through the Commodore defense on multiple occasions. Hampton connected with Huskie wide receiver Cole Tucker on a slant route on a third-and-five, which resulted in a 70-yard touchdown to put Northern Illinois up 28-14. This play came one drive after Huskie running back Antario Brown found the end zone on a 51-yard scamper before the end of the half.

Too often on Saturday, it seemed as if the Commodore defense was left chasing Northern Illinois around. That shouldn’t happen against a MAC opponent, let alone one playing their freshman backup under center. Thus far, the defensive unit under Nick Howell has clearly made strides but has also been largely inconsistent.

With that said, after surrendering the two long touchdowns to put Vanderbilt in a 28-14 hole, the defense was stout for the rest of the contest. After a costly Jayden McGowan fumble threatened to put the Commodores down three scores early in the third quarter, Howell’s group woke up.

Vanderbilt allowed just 68 yards of offense from that point forward, forcing three punts and stopping the Huskies twice on fourth down. De’Rickey Wright capped off the turnaround with an interception to finish off the Huskies.

It was a welcome sign of progress to see Team 2 once again not fold under pressure. Unlike against Hawaii, this adversity did not come in the first quarter—rather in the second half when there was much less margin for error. And unlike against Elon, Vanderbilt didn’t have the lead to rely on this time—the Commodores had to score 24 unanswered points to overcome the Huskies in this one. That’s a tangible improvement in the Lea era.

“I’m really proud of the team for that [comeback]. I think it represents growth. Doing it and doing it consistently are two different things,” Lea said afterward. “I thought a big part of that was our defense was stepping in after the turnover and delivering the first stop. Sometimes it’s that simple.”

The Commodores will make the dreaded trip to Tuscaloosa next weekend to face off against the No. 2 Alabama Crimson Tide. There is likely not much that we will learn from the expected blowout, although youngsters Patrick Smith and Trudell Berry both figure to be back from suspension for the contest.

But as Vanderbilt traverses through the rest of its SEC schedule, there are definitive opportunities for this team to notch a conference win. I’m not sure I’ve ever said that with such confidence in my tenure on West End. 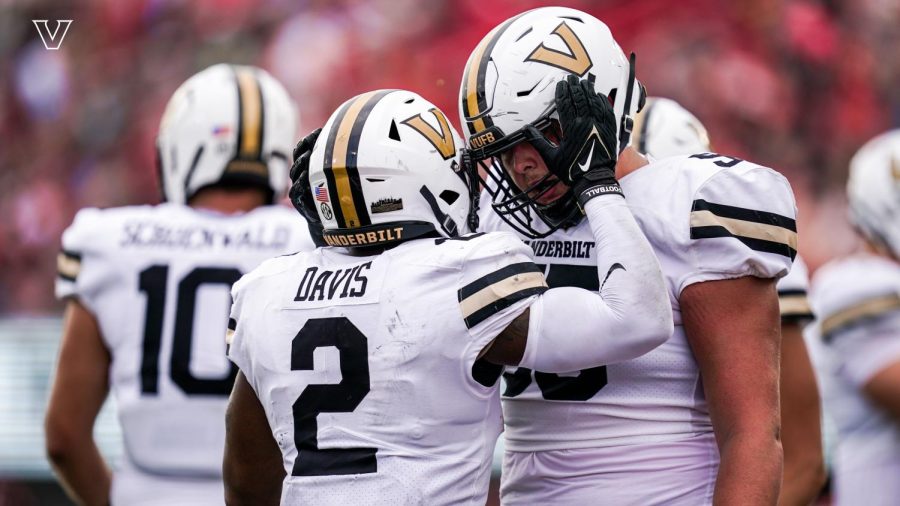 Looking around the rest of the league thus far, it’s possible that Vanderbilt is not at the conference’s cellar for a month.

Missouri, the Commodores’ Week 8 opponent, has limped out of the gates so far. The Tigers have two uninspiring victories over Louisiana Tech and Abilene Christian and got embarrassed by Kansas State last week, losing 40-12. Mizzou scored 6 points with zero seconds left on the clock to avoid a 40-6 defeat.

South Carolina, who Vanderbilt should have beaten in Columbia last season, is out to a 1-2 start. Hot-shot transfer quarterback Spencer Rattler has thrown five interceptions to just two touchdowns thus far. With a developing Swann under center, it’s possible that Vanderbilt has the better signal caller against both the Tigers and the Gamecocks.

Elsewhere, Florida looks much less strong than usual. Under first-year head coach Billy Napier, the Gators narrowly defeated South Florida on Saturday, 31-28. This game was off the heels of a double-digit home loss at the hands of Kentucky.

I’m not arguing that Vanderbilt is going to win against any of these teams, or even come close to it at this stage. But with perhaps a real quarterback under center and a group that has proven to be more resilient and gritty than in years past, there is legitimate hope that there is a win to be found on the SEC schedule.

After four games, that’s about all you could ask for.