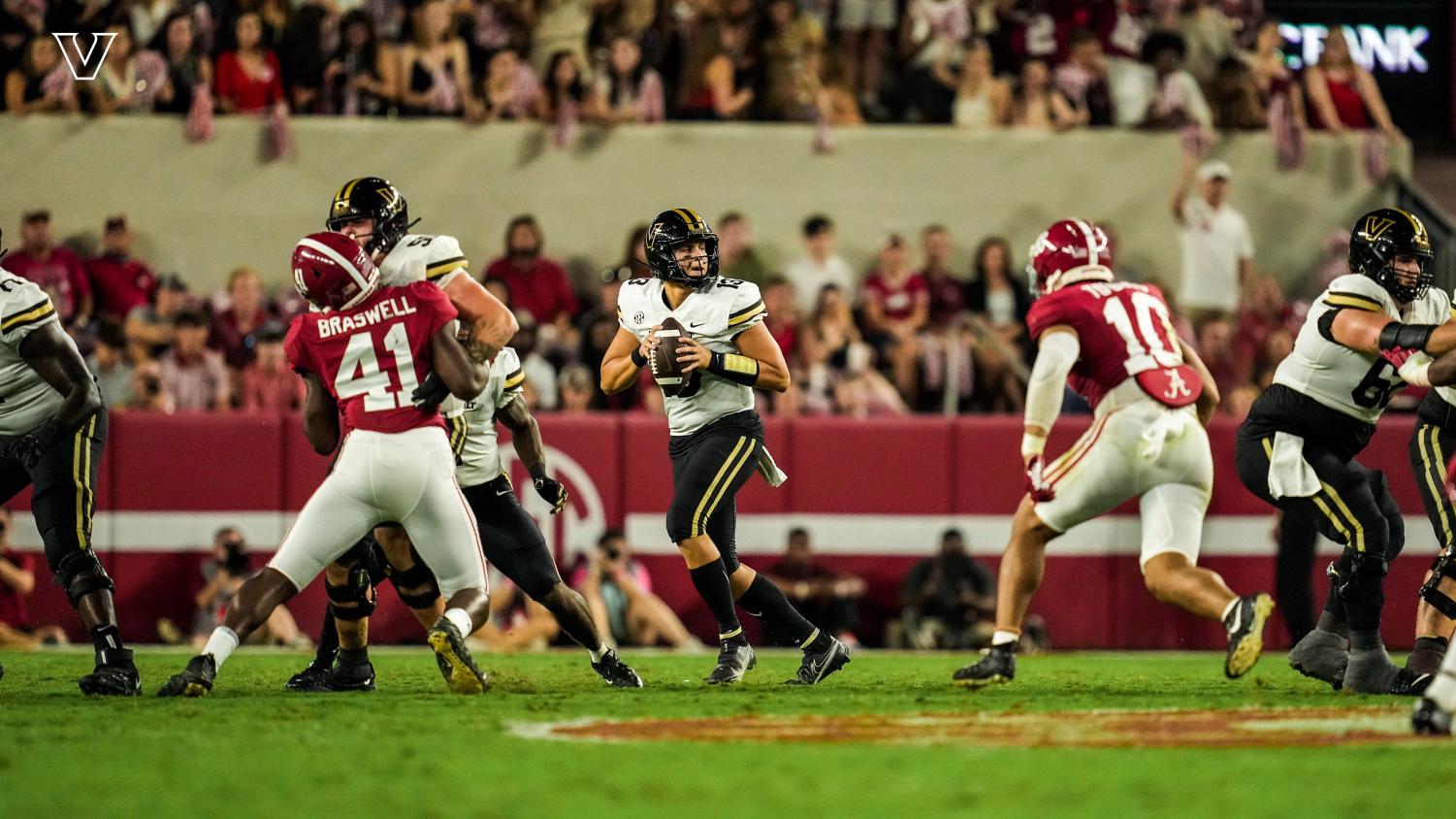 Vanderbilt avoided their third straight shutout to Alabama but were demolished by the Crimson Tide, 55-3.

In Vanderbilt’s first SEC game of the season, they were humbled by the powerhouse Alabama Crimson Tide 55-3. Nobody predicted the Commodores to win, including myself in “Live From West End”. I predicted that Vanderbilt would lose to the Crimson Tide 41-10 but I overlooked Alabama’s offensive prowess.

Bryce Young, the 2021 Heisman Trophy winner, and the Alabama offense stomped all over the Commodore defense, finishing the day with 628 total yards. The Crimson Tide ran for 228 yards and 6.7 yards per rush, while Vanderbilt ran for 14 yards and averaged 0.5 yards per rush. In addition to a ferocious rush attack, Alabama’s passing offense was unable to be stopped. Young, Jalen Milroe and Ty Simpson combined for 400 passing yards and four touchdowns.

“The balls that they were able to find over the middle were more about an absence of a win up front on a one-on-one pass rush to shorten the down, or just finding coverage late in the down,” Clark Lea told “247sports” after the game, “The throws on the perimeter is where we got to strengthen. This is not new, but we gotta use this by week to strengthen out there.”

In Alabama’s first drive of the night, the Commodores forced a punt thanks to a key stop from Jeremy Lucien and Anfernee Orji on third-and-eight on Alabama’s 37-yard line with just over 12 minutes left in the first quarter.

The first drive looked to show that the Vanderbilt defense was vastly improved from 2021, but they quickly regressed and were torn apart the rest of the night. In Alabama’s next eight drives, they scored five touchdowns, notched three field goals and had one turnover-on-downs. Alabama’s punter, James Burnip, did not see the field until the Crimson Tide led Vanderbilt 41-3 with 5:10 left in the third quarter.

Freshman quarterback AJ Swann cooled down and was brought back to earth on Saturday night after having a historic day against NIU last week. Swann started the day strong, going 7-10 for 46 passing yards in the first two drives but the day went downhill quickly for the Georgia native. Swann completed half of his passing attempts, completing 13 of his 26 attempts, and threw for 115 yards. Swann was sacked five times on the night and was constantly pressured and forced to get the ball out quickly. The youngster made some great throws, especially to his safety valve, Will Sheppard. Sheppard didn’t have another historic day but racked up three catches for 52 yards.

The Alabama secondary shut down all of Vanderbilt’s weapons on the perimeter after the first two drives, forcing Swann into horrendous situations. The quarterback cannot evade defenders and win with his legs like backup quarterback Mike Wright can. By the start of the third quarter, the Commodores trailed Alabama 31-3 and were forced to throw the ball in order to punch back into the game. Vanderbilt was unable to do anything offensively in the second half and punted on every drive, excluding the drive at the end of the game that started with 32 seconds left in the fourth quarter.

“I don’t know that I would look at anything and say that [there] was something we did really well. We won some one-on-ones on the perimeter, but we gotta play complementary football,” Lea said. “When you’re stalling, out three-and-outs, you’re exposing your defense too much, and we need to be better.”

Vanderbilt has not beaten Alabama since 1984 and that record might not be broken for a few years but the Commodores will look to snatch a conference win as soon as two weeks from now against No. 16 Ole Miss. As the Commodores’ schedule does not get much easier, they will need to use their bye-week to reshape and redefine their passing defense as well as their offensive attack. Let’s take a look at what is served for Brunch this week.

Vanderbilt and Alabama are two programs that outsiders remark as polar opposites. The Commodores have not had a winning season since 2013 when James Franklin led Vanderbilt to a 9-4 record and a win over Houston in the BBVA Compass Bowl. On the other side, is Alabama. Since Nick Saban became the head coach for the Crimson Tide in 2007, they have won eight SEC championships and six national championships. Vanderbilt may not have the same success as Alabama in the past decade but Lea wants to change that narrative.

Vanderbilt was trounced on Saturday night in every aspect of the game. The Commodores were humbled by a well-structured Alabama roster that has multiple NFL-caliber players on their team. The Commodores looked smaller, weaker and slower than the Crimson Tide. The game proved that Vanderbilt is on a different playing field than Alabama, but that is the case in the present.

“Obviously a disappointing effort, disappointing result and a result we need to learn from and grow from moving forward. I want to give credit to Alabama,” Lea said. “Obviously I felt like they came out and played to their potential and did a nice job in their plan and in the execution of their plan, were able to put distance between us and them early, and we weren’t able to ever really apply pressure.”

Alabama specifically demolished Vanderbilt in the trenches. Trailing the Tide 14-3 with 13:29 left in the second quarter, the Commodores gambled and went for it out on fourth-and-one on their 34-yard line. Offensive coordinator Joey Lynch elected for Swann to keep the ball and rush for a first down but the freshman was unsuccessful.

“It’s fourth-and-1 and I’m gonna bet on my team. That’s a part of our identity,” Lea said. “We’re playing to win the game…We came up short unfortunately, and again, that’s going to be something that we scrutinize in terms of the design or the execution. But yeah, we’re gonna go for that every time.”

On Friday, I broke down what Vanderbilt would need to do to stay competitive in the game and one of the matchups I keyed in on was Alabama’s Young vs. Nick Howell’s defense. Howell, the defensive coordinator of the Commodores, was faced with his toughest challenge since coming to Vanderbilt. Howell was unable to stop Alabama’s offensive coordinator Bill O’Brien’s game plan. O’Brien utilized his weapons on the perimeter and tore up the Commodore secondary.

Young went 25-of-36 on his passing attempts and posted an outstanding 195.9 quarterback ranking. Heading into the game, I said that this was one of Alabama’s less talented wide receiver rooms that an Alabama team has had. I was under that impression because they lost all three of their starters to the 2022 NFL Draft in John Metchie, Jameson Williams and Slade Boldon. I could not have been more wrong, and I have learned my lesson that Alabama will always have a strong wide receiver room as long as Saban is the head coach.

Sophomore Ja’Corey Brooks had a career day and went for 117 yards and two receiving touchdowns. Brooks outran and outplayed Vanderbilt cornerbacks Tyson Russell and Jeffrey Ugochukwu all night, including Alabama’s first scoring drive of the night. In this drive, Brooks caught four consecutive passes for 68 yards and a touchdown. On the other side of the field was Alabama receiver Jermaine Burton who had his best collegiate game. The Georgia transfer had four catches for 94 yards, including a 48-yard catch and run.

Howell and the defense were unable to make formidable adjustments after Alabama’s four-play touchdown drive that put the game at 7-3. Brooks continued to find ways to get the ball, as well as Burton and Jahmyr Gibbs. Gibbs, arguably the best running back in the SEC, caught three passes for 43 yards and a touchdown. Against Ole Miss, Howell will need to implement more disguises to confuse defenses, implement a better pass rush and might need to utilize press coverage more often.

If you were to tell me in mid-August that Vanderbilt would enter their bye week at 3-2, I would be thrilled. Before the season, the Commodores had only won two games since the start of the 2020 season and never showed a sense of consistency or identity. Even though Vanderbilt was manhandled by SEC-opponent Alabama on Saturday, the Commodores have a lot to be proud of this season.

The Commodores have had two SEC Freshman of the Week honors already, thanks to Jayden McGowan’s 118 receiving yards over Elon and Swann’s remarkable play against NIU. Even though there was a quarterback change after the Wake Forest game, Wright started the season very well and scored a school-record six touchdown passes over Elon. For Vanderbilt to get back to their winning ways, they will need to reshape their offensive gameplans and continue to find creative ways to get their weapons like Sheppard, McGowan, Ray Davis and Rocko Griffin the ball.

Vanderbilt’s schedule features no “easy” games from here on out, as the Commodores play No. 16 Ole Miss and No. 1 Georgia in consecutive weeks after the bye week. Lea wants to be competitive and show the world that this is the new Vanderbilt that is here to compete.

“I go back to what I said—success is never gonna be as clean as you want it to be. We ran up against a wall tonight, and now we got to fight our way through it,” Lea said. “We’ll show up better after the bye week heading into Ole Miss.”