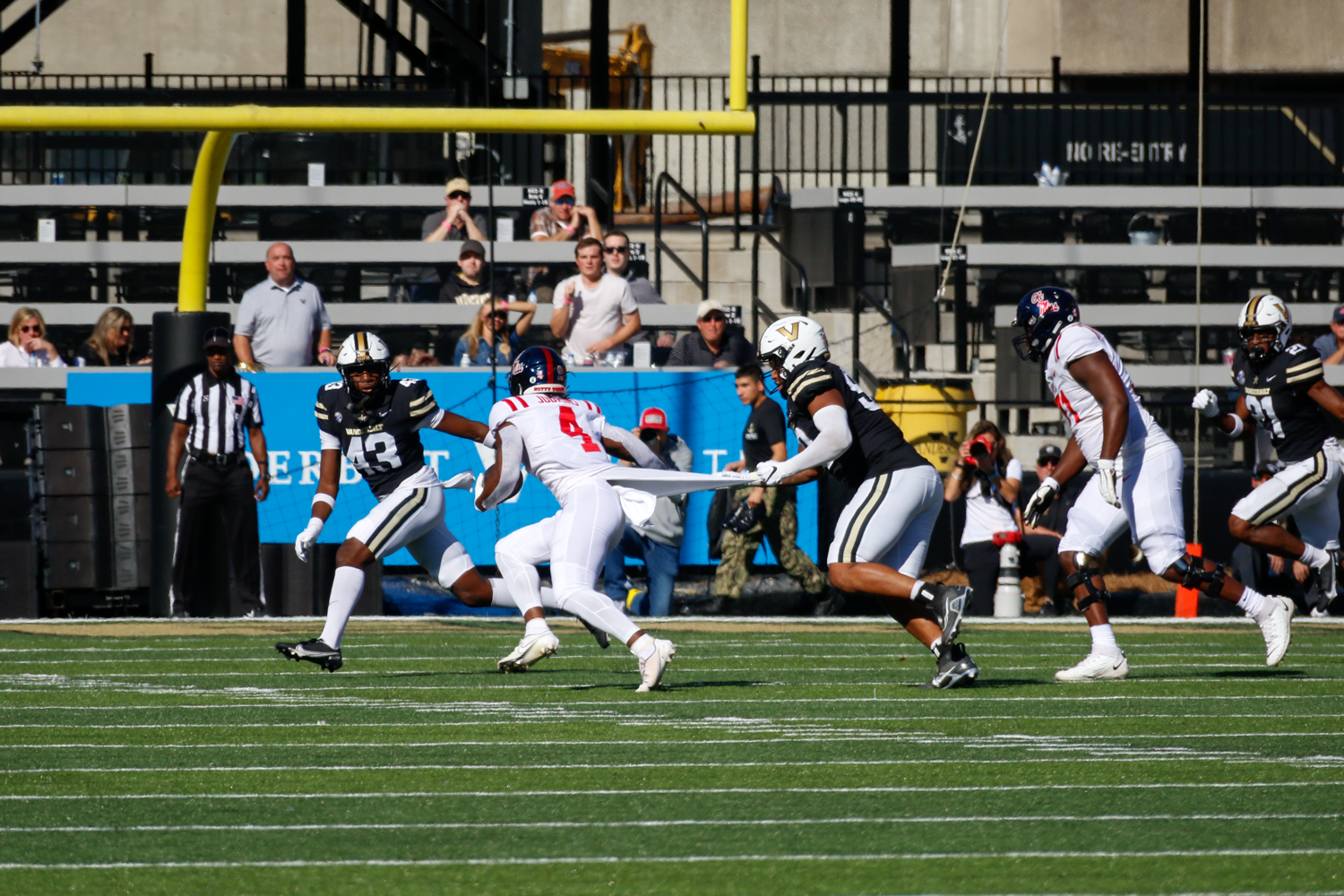 Commodore Brunch Week Six: Something to Chew On

It was far from a perfect showing for Vanderbilt on Saturday, but there are some things to build on.

There’s an old saying in college football—likely created by some marketers at the University of Oregon—along the lines of “look good, play good.”

Donning white helmets over black tops and white britches, Vanderbilt looked good on a beautiful fall afternoon in Nashville on Saturday. Through the better part of two quarters, Vanderbilt played even better, seeming to be poised to pull off a shocking upset over No. 9 Ole Miss. The Commodores took a commanding 20-10 lead over the Rebels following a 15-play, 75-yard drive that took over half of the second quarter. Clark Lea and his bunch punched in a touchdown on a gutsy fourth-down run from Ray Davis. In front of the largest crowd of the year at FirstBank Stadium, the Commodores appeared ready to play the role of spoiler on homecoming.

The only problem was the 1 minute and 32 seconds left on the clock before halftime. Ole Miss only needed 56 of those seconds to strike back on a 3-play, 65-yard touchdown drive that cut the Commodore lead to 20-17. The Rebels scored touchdowns on six of their next seven drives, dismantling Vanderbilt in the second half to the tune of a 56-28 defeat.

“Obviously a disappointing result, and really disappointed for our team,” Lea said afterward. “I felt like we came out playing the style of football that we needed to play to win the game and had every intention to come out in the second half and to do that all over again. The things that we did well in the first half, we weren’t able to carry over into the second half.”

Vanderbilt looked noticeably improved in the opening half against a feisty Rebel side, yes. Freshmen duo AJ Swann and Jayden McGowan provided fireworks with an epic 36-yard touchdown to give the Commodores their first lead of the day. Lea’s defensive unit capitalized on Ole Miss’ mistakes forcing a turnover on downs and an interception in the first half.

But football is a 60-minute game. Four quarters, not two.

If anything, Saturday’s game provided a glimpse at what this program could look like when Lea has it where he envisions it to be: a complementary run-and-pass game that chews clock. An opportunistic defense that plays with spirit. A roster that can go toe-to-toe with a top-10 opponent at home.

The Commodores are not there yet. Team 2 continues to show signs that this program will climb that mountain. But until that pinnacle is reached—and it won’t be for a while—there will continue to be growing pains. This isn’t a team that is going to be able to shoot itself in the foot repeatedly and overcome those mistakes yet.

That’s okay. Despite the final score, there is a sense of direction here. There is evident progress from where this group was by Week Six a year ago, with a 42-0 loss to the Florida Gators in Gainesville.

This week’s Brunch isn’t the best the Commodores have had this season, but there’s reason to believe it might be one of the worst left on the menu this year aside from the bloodbath that is sure to take place at Georgia next week. With an entire SEC slate left in front of them, Vanderbilt can stomach that for now.

Every fan–every true fan–eventually develops a sixth sense where you can predict exactly when your team will make a backbreaking mistake. You are never wrong. It is the most powerful feeling in the universe.

Commodore fans can likely pinpoint pretty easily where this game unraveled on Saturday.

It started precisely three plays after Vanderbilt’s momentum-filled scoring drive to take a 20-10 lead with 1:33 left in the half. With the air sucked out of the Ole Miss sideline, the Commodores had a chance to go into the break-up two scores and receive the ball coming out for the third quarter.

On third down and one, Rebel quarterback Jaxson Dart completed a 48-yard pass to Jonathan Mingo—a pair that torched Vanderbilt all day—to get Ole Miss to the Commodore three-yard line. The Rebels scored three plays later, slicing Vanderbilt’s lead to 3 and killing their confidence in the process.

Vanderbilt came out of the locker room with a chance to regain some of the lost momentum. In what would become a major theme of the second half, a holding penalty on the Commodore offensive line halted progress on the drive, forcing Vanderbilt to punt it back to the Rebels after just five plays.

Dart completed passes of 17, 6, 8 and 11 yards to push the Rebels into Commodore territory. A Dart scramble and Vanderbilt penalty got Ole Miss to the edge of the red zone where they finished the job with a 24-yard touchdown from Zach Evans to take a tidy 24-20 lead.

Swann connected with wideout Will Sheppard—who had another fantastic day for the Commodores—to start the drive, but the completion was called back for, you guessed it, a holding penalty. After a minimal gain from Ray Davis on first down, Swann looked for the running back again on a swing pass on 2nd-and-16. His pass bounced off of Davis’ hands, harmlessly falling to the turf.

Or at least Vanderbilt thought so. Ole Miss’s defense had the sense to at least pick up the ball in the case the screenplay was a backward pass, and thus, a fumble. They were correct in that inclination. The referees ruled the throw indeed to be backward, setting up Ole Miss on the Vanderbilt six-yard line. Quinshon Judkins scored on the next play for the Rebels.

Following another holding penalty that derailed a promising first down conversion from Swann to tight end Ben Bresnahan, Vanderbilt punted the football back to Ole Miss after a three-and-out.

Dart found Mingo on the next play for a 71-yard touchdown to make the score 38-20 Ole Miss a little over halfway through the third quarter.

The Commodore collapse was revealing in a few different ways.

This offense is not currently good enough to repeatedly shoot itself in the foot and even think about getting away with it. Vanderbilt needs to play an extremely disciplined brand of football to compete with superior SEC foes and they did not do that on Saturday. Holding penalties and fumbles in the red zone is not a recipe for success.

This defense is not currently talented enough to compete with the speed of elite SEC skill players like Jonathan Mingo. The Rebel wideout collected nine receptions for 247 receiving yards, the most in Ole Miss program history. He added two touchdowns to that line.

This team is not currently equipped to handle the sudden changes due to their own mistakes. Just like against Wake Forest, the Commodores completely unraveled at the first sign of major danger from Ole Miss. That will need to improve if Vanderbilt wants to end their winless SEC streak in 2022.

I’ve just spewed over 600 words about what went wrong on Saturday, but this wasn’t a fruitless effort for Vanderbilt. The Commodores outplayed a top-10 opponent for nearly two quarters on Saturday. They amassed over 400 yards of offense on one of the stoutest defensive units in the SEC. They allowed just 143 rushing yards to a team that paced the league in both rushing yards and rushing touchdowns coming into the contest.

Perhaps most importantly, it was the young stars who continued to emerge as key playmakers for Vanderbilt. That bodes well for Lea and the future of this program. The passing offense was the biggest positive takeaway from Saturday’s effort.

At quarterback, AJ Swann looks like the answer both now and for each of the next three to four years. This feels different than other youngsters who have rotated in under-center over the past couple of seasons. Swann completed 27 of 38 passes for 281 yards and two touchdowns on Saturday. For the season, he’s completed over 60% of his passes and has a 8:0 TD-to-INT ratio.

He’s found chemistry with junior Will Sheppard and freshman Jayden McGowan through the air—and both topped 80 yards receiving against Ole Miss.

Through six games, Sheppard is amazingly tied for the fourth-most receiving touchdowns (8) in program history. He has become a bonafide breakout star on this offense, reeling in 9 catches for 87 yards and a touchdown on Saturday. The only question at this juncture is if he will jump ship for the NFL after this season or the next, although Sheppard does still have two more years of eligibility. Selfishly, I hope he uses at least one of them.

#Vandy WR Will Sheppard finished with 9 receptions, 87 yards and this score against Ole Miss.

Then there’s McGowan, the gem of general manager Barton Simmons’ first recruiting class at Vanderbilt. McGowan, a three-star with no major offers when he committed to the Commodores, is having an all-SEC-worthy freshman season thus far. He is as dynamic in space as any Vanderbilt skill player I can remember during my time on West End. In a season that has been full of highlights for no. 16, he provided the best of them on Saturday.

Midway through the second quarter, the Commodores ran a simple screen pass to the freshman near the 40-yard line. McGowan shook his defender out of his shoes and sprinted down the sideline on his way to the endzone, outracing the entire Rebel secondary along the way. It was reminiscent of the SEC-level speed that has given Vanderbilt problems on the other side of the ball.

Swann to Sheppard and Swann to McGowan is the emerging storyline of the season for this Vanderbilt team. If Joey Lynch—who called a pretty nice game on Saturday aside from his puzzling non-usage of Rocko Griffin—can continue to dial up opportunities for Swann to hit his two favorite targets, Vanderbilt’s passing offense will be a legitimate force to be reckoned with in the SEC. When was the last time that was true?

Hope on the horizon

Speaking of the rest of the SEC slate, Vanderbilt is about to get through the worst of it. The Commodores will head to Athens next week to face off against Georgia in a contest that likely won’t have much to take from it.

From there, the Commodores have the best chance to string together a conference win or two they have had since 2019. After facing three top-10 opponents to open up the league schedule, Vanderbilt will go on a four-game stretch against Missouri, South Carolina, Kentucky and Florida. The combined conference record of that quartet is 3-9. 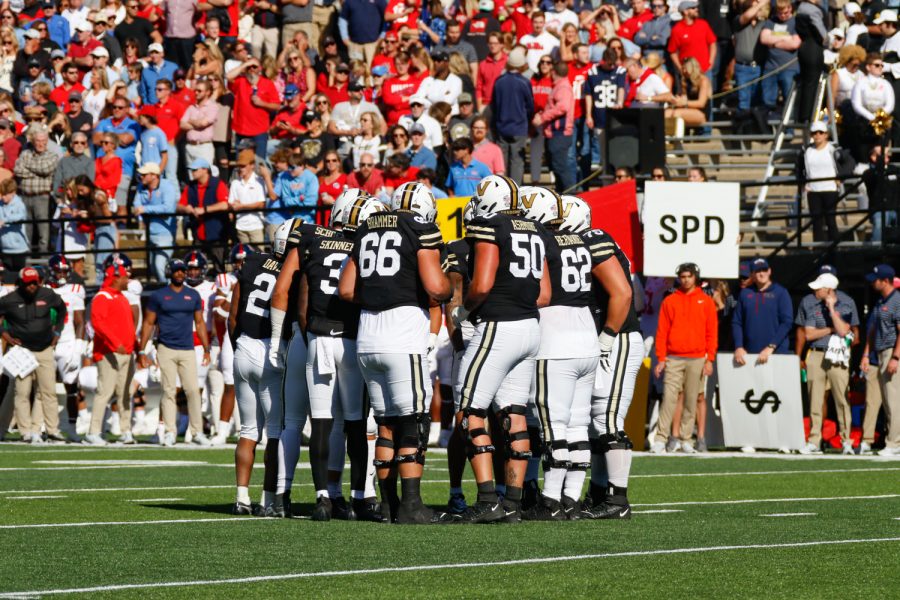 If Vanderbilt is able to improve upon their mistakes from Ole Miss, they will be able to compete with, if not beat, each of those opponents. Last season, Team 1 got better as the season went along. Team 2 will need to continue that trend and they are probably better equipped to do so with the benefit of Swann under center. As he goes, so too will Vanderbilt.

Saturday showed these Commodores have the ability to win an SEC game. Now it’s just about finishing the job through four quarters, not two. On to Georgia.

The Vanderbilt Hustler welcomes and encourages readers to engage with content and express opinions through the comment sections on our website and social media platforms. The Hustler reserves the right to remove comments that contain vulgarity, hate speech, personal attacks or that appear to be spam, commercial promotion or impersonation. The comment sections are moderated by our Editor-in-Chief, Rachael Perrotta, and our Social Media Director, Chloe Postlewaite. You can reach them at [email protected] and [email protected]
All The Vanderbilt Hustler picks Reader picks Sort: Newest
Subscribe
Login
1 Comment
Newest
Oldest Most Voted
Inline Feedbacks
View all comments
J
John E Ingle

Nice writeup. The bottom line at Vanderbilt, though, always has to be “Wait ’til next year!” Sadly, these young players are vulnerable to the nefarious transfer portal in just a few months.