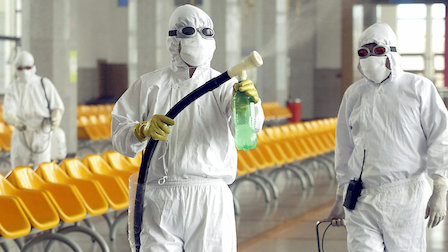 Not so unprecedented: Netflix’s ‘Explained’ predicted the COVID-19 pandemic

Released in 2019, “The Next Pandemic” episode of Netflix’s “Explained” series reveals many warnings about an upcoming pandemic

Season 2 of “Explained” by Vox was released on Netflix in 2019, which zooms in on the Vox team’s explanations on a featured topic in each 16-25 minute episode. The subjects covered vary from how cults work to how diamonds are made to, you guessed it: pandemics.

Since hindsight is always 20/20 (no pun intended), we decided to watch an episode titled “The Next Pandemic,” which provided us some scarily accurate predictions about the pandemic we are currently experiencing. Here’s what the episode got right, and what advice we ignored.

The episode starts off by presenting the ways in which the world could end—and then Bill Gates determines that a pandemic is the most plausible event to occur. The episode claims that the stakes for a pandemic have never been higher, estimating that out of 1.5 million unknown viruses, public health researchers only know of 3,000 (less than 0.1%). Additionally, the team predicts that the pandemic will come from a zoonotic virus—one that originates from animals and transfers to humans.

Due to the nature of wet markets, animal blood (and viruses) can be easily spread because animals are killed on site. These different species are in close quarters, allowing their viruses to mix and mutate. This results in increased odds of human transmission, according to the episode. COVID-19 likely originated from bats in a wet market in China.

Technology is always responsible for the rapid spread of viruses

Every historic pandemic has spread due to human technology. Per “Explained,” the Black Death, a combination of bubonic plague and pneumonic plague, reached Europe through ships. The 1918 flu pandemic emerged in the middle of WWI, allowing the virus to spread as troops traveled transatlantically. Smallpox, tuberculosis, measles and other diseases also became pandemics due to human travel.

With more efficient tech than ever before, viruses can travel around the world in days, easily erupting into a full-fledged pandemic. Although it originated in Wuhan, China, COVID-19 quickly spread due to international flights. Over 500 international flights took off everyday in 2003 in Hong Kong at the onset of the 2002 pandemic, a figure which only multiplied in 2020, according to the episode.

The death toll will be severe

A modern pandemic will have an unbelievable cost to humanity and no country would be immune, Bill Gates said. Unfortunately, this prediction certainly came true, and COVID-19 continues to take many lives throughout the world. The episode estimated that a pandemic today could 33 million people in 6 months. According to Johns Hopkins’ Mortality Analysis, there have been approximately 1.25 million deaths due to COVID-19.

The economy will be shut down

According to Bill Gates in the episode, the next pandemic would cause the economy to shut down. A global survey conducted by BBC recorded these huge falls in the stock market due to COVID-19. The Dow and the FTSE had their biggest quarterly drops since 1987. There has also been a significant rise in unemployment rates, with the United States, Italy and France being hit hardest.

The advice we didn’t listen to:

Based on the critique of the response to the Ebola outbreak in Africa, Obama expanded the National Security Council to include the Directorate of Global Health Security and Biodefense in 2016. In 2018, the Trump administration restructured the National Security Council resulting in the disbandment of the global health unit. There were a limited number of infectious disease and pandemic related staff left when the onset of COVID-19 occurred in the US in March of 2020.

The narrator goes into detail about the 2002 SARS pandemic in China, whose outbreak was accredited to the killing of on-site animals in wet markets. It is noted that the mixing of blood between animals creates “Disease X Factory” due to the contagious nature of zoonotic viruses.

Epidemiologists state that SARS in 2002 could have been a “nightmare scenario,” per the episode, however,  it just “went away” without a serious coordinated response needed.  As the study of COVID-19 reveals the relation between these markets and the spread of the disease, jeopardizing the future of these markets.

Following the 2002 SARS outbreak, the World Health Organization “brought together 196 countries to commit to improve ability to detect, assess, notify and report public health events” as a way to normalize countries working together to fight disease. However, the episode cited that only ⅓ were in compliance with the WHO commitment in 2014. A better assessment of this may have left us more prepared to have a unified response across the world to COVID-19.

Focus on the effects of climate change

“Explained” emphasized the impact of climate change-related activities on the increased spread of zoonotic viruses. The narrator credits deforestation and factory farming as an additional way for emerging diseases and viruses to spread in the modern world. As their environments are destroyed, animals carrying infectious diseases that would not have previously had contact with humans are pushed into more civilized and urban areas where the disease then spreads.

A second theory explored by infectious disease ecologists, including Christina Faust at Penn State University, is that deforestation reduces the spread of disease only between animals and expands it to humans.

“If a bat sneezes in a forest rich with biodiversity, it’s more likely that the pathogens carried in that sneeze land on another animal rather than a human,” Faust said in an NPR article from June.

The episode focuses on two main developments in the world of vaccines: Coalition of Epidemic Preparedness Innovations (CEPI)  and the universal influenza vaccine. The CEPI was reported to be developing a vaccine for “Disease X” in 2019. Their plan was to create injections of genetic material which tell the body to develop protein molecules and antibodies of any virus, thereby cutting vaccine development time to just 16 weeks.

We followed up on CEPI and, as of right now, their website states that they have “initiated nine partnerships to develop vaccines against COVID-19.” Currently, they report to be entering Phase 3 of their clinical trial, so hopefully, they will have succeeded in developing a precursor to the universal “Disease X” vaccine through the vaccine for COVID-19.

In addition, the narrator comments on the overall work of epidemiologists around the world in developing a permanent influenza vaccine (which would eliminate the need for a yearly vaccination).

So maybe “Explained” didn’t exactly predict Coronavirus, but it sure came eerily close. Had we all tuned in 2019, maybe we could have been a little smarter about understanding the progression of this type of disease. Or at the very least, we could have avoided bats at the wet market.

The Vanderbilt Hustler welcomes and encourages readers to engage with content and express opinions through the comments section on our website and social media platforms. However, The Hustler reserves the right to remove comments that violate the outlined policy. Comments which contain vulgarity, hate speech, personal attacks or appear to be spam or commercial promotion will be blocked or removed by The Hustler. The comments section, both on the website and social media, is moderated by the Editor in Chief.
All The Vanderbilt Hustler Picks Reader Picks Sort: Newest
Subscribe
Login
1 Comment
Newest
Oldest Most Voted
Inline Feedbacks
View all comments

Interesting article but super creepy, I need to watch the episode’s prediction