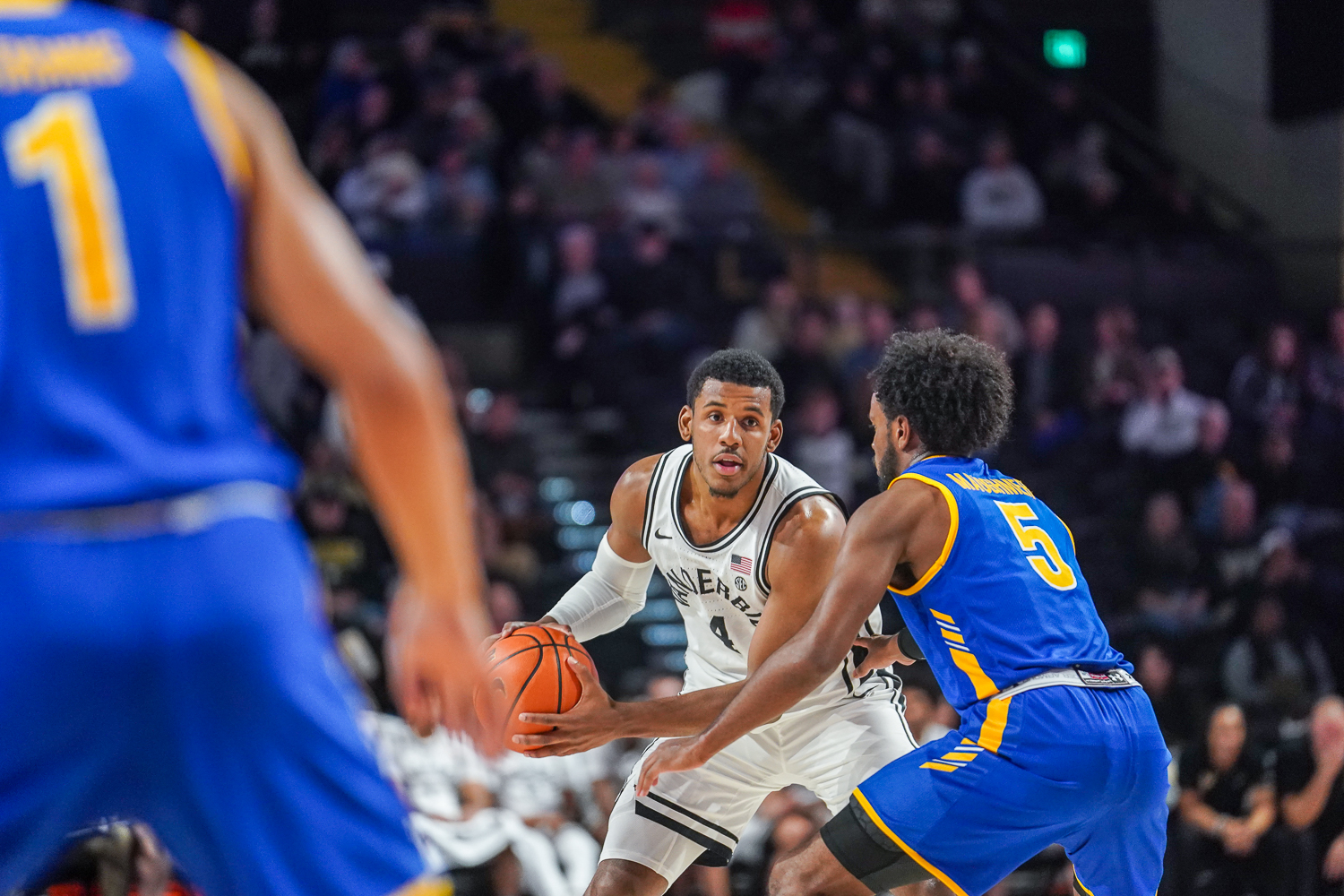 Jordan Wright looks for an opening, as photographed at Memorial Gym on Nov. 18, 2022. (Hustler Multimedia/Arianna Santiago)

Vanderbilt men’s basketball dropped two important games to start the season but have since returned to .500. What happened, and what needs to change going forward?

I am very glad Memorial Minutes is published every other week, because, man, I’m not sure I could’ve written this column without throwing my laptop out the window after Vanderbilt’s atrocious performance against Southern Miss last week. After two home losses—one to a team placed at No. 257 on KenPom’s infamous know-all rankings, things looked bleak for the Commodores. Making the team’s 36.7/27.3/52.2 (FG/3PT/FT) shooting split look positive would have been a near-impossible task for any analyst, let alone any realist, to accomplish, but I would’ve tried for the sake of optimism.

Gladly, I now have four games to examine.

The team that competed during Vanderbilt’s first two games is very different from the one that competed in its last two games. Each team has a very different future: The first team has no offensive identity and will be lucky to have a pedestrian season that culminates in a potential (emphasis on the potential) NIT bid. The other team utilizes its versatility, size and deep bench and will set itself up for a respectable run in the NCAA Tournament. Only time will tell which team is here to stay.

If you played youth sports with a demanding coach, you’ve likely heard this one before. Or perhaps you heard: “Be brilliant at the basics.” Either way, it’s a tried and true strategy for every team in any sport at any level of the game. In basketball, this mantra means connecting on simple passes, successfully inbounding the ball and hitting free throws—which are the easiest part of basketball to practice as they require only the shooter, a basket and a foul line.

Vanderbilt has seemingly decided to rebel against this strategy, and it has not worked well so far. The team has shot a combined 50% on its 52 free throws, and the only player to achieve perfection is a center, fifth-year senior Quentin Millora-Brown. Free throws are crucial in basketball, especially at the collegiate level where bonus and double bonus differ in the number of guaranteed free throw attempts. Missing these gimme-points means difficulty in holding leads, missed 3-point play conversions and forgone second free throw attempts when in bonus, rather than double bonus. Surely, we will see some regression to the mean, but if I were head coach Jerry Stackhouse, I’d rip a page of out the script of Coach Carter: “From now on, before you leave my gym, you must pay an exit price of 50 made free throws before you can go.”

Inbounding and passing—fundamental parts of the game—have been lackluster as well. However, the Commodores turned this narrative around in their last two games. Against Memphis and Southern Miss, Vanderbilt recorded 28 turnovers, 14 of which were recorded as bad-pass turnovers. Against Temple and Morehead State, Vanderbilt recorded 22 turnovers, only 7 of which were due to bad passes. Clearly, turnovers were decreased but so were bad pass turnovers, one of the worst types of giveaways, as they can often be taken for a quick break in the other direction.

So, yes, Vanderbilt has not shot the ball well, and I have questions about the team’s shot choices at times—too often have fans seen a desperate 3-point attempt hoisted up after 25 seconds of passing the ball around the key—but the Commodores are also struggling with simple scoring and offensive mechanics. While I’d like to chalk these concerns up to Vanderbilt’s youth given the significant minutes freshmen Malik Dia, Noah Shelby, Colin Smith, Paul Lewis and Lee Dort have received, it’s often been veterans making these key mistakes. This predicament might be why Stackhouse decided to bench these experienced players to start the Southern Miss game. Perhaps he was sending a message to his whole team that fundamental errors must be minimized. Whether this is the case or not, the move can certainly be viewed as Stackhouse trying to be a little “too cute,” deviating from the basics himself.

After the departure of Scotty Pippen Jr., the Commodore faithful wondered who would be the next man up. Who would seize the gauntlet, fill the shoes, take on the pressure of being the No. 1 guy? Senior Jordan Wright seemed like that guy. After all, he’s a wily veteran who was first or second on the team last year in essentially every meaningful statistical category—points per game (PPG), rebounds per game (RGP), assists per game (APG), steals per game (SPG), minutes, free throw percentage… you get the idea. Yet, he hasn’t lived up to critics’ high expectations through the first four contests.

In fact, his PPG, RPG, SPG, free throw percentage and 3-point percentage are all down from last season, while his turnovers per game have gone up from 2.4 to 2.8 in the same time frame. One could turn to his minutes decreasing by about 2.5 per game or his slight increase in field goal percentage from 42.3% to 43.2% as evidence against his tumultuous start to the season, but it’s clear that he’s adjusting to the team’s growing pains. This Commodore squad is finding their identity, and it’s been hard for him to get into a rhythm. Even in their two wins, Vanderbilt’s standout players were big man Liam Robbins (20 points on 9-of-11 shooting and 3 blocks against Temple), forward Myles Stute (career-high 21 points on 7-of-10 3-point shooting with 6 rebounds and 3 steals as well) and guard Tyrin Lawrence (17 points and 5 rebounds in a win over Morehead State), not Wright.

Ultimately, this team will live and die with Wright. He is still their most important player, and Vanderbilt will need him to score more points than he did last year when Pippen Jr. was adding over 20 a game. How this will happen is yet to be determined. On some level, it’s about Stackhouse’s system and the coach trusting him enough to put the ball in his hands consistently, but by that same token, Wright has to take the reins and show the play-caller that he deserves a higher share of possessions.

“I just take what it [the offense] presents,” Wright said after the Memphis loss. “Whatever I’m asked, I’ll do. We ran the offense, we ran the system we were supposed to run. I should crash more, get some more opportunities to shoot the ball if that’s what I need to do—I’m fine with it. I’ll do whatever the team needs.”

Credit to the senior leader for his team-first mindset, but it’s also possible that the best thing for the team is Wright being more selfish. That way, other parts of Stackhouse’s offense open up. Attention on a wing player like Wright might open Robbins and Millora-Brown down low. Or it might open Stute on the weak side for more 3-point opportunities. Or it might open lanes for more Ezra Manjon drives. The possibilities are endless once you find an offensive identity, and that responsibility falls to team leaders like Wright. So, consider this section a challenge, not a criticism, for Wright & Co. because, without heavy production from him, this team will likely fall short of the big dance come March.

He’s right, of course. This is only the first Memorial Minutes, and the team’s SEC slate hasn’t even begun. Plus, you don’t want to hit a hot streak at the wrong time of the season.

“I’ve said it before: It’s not about winning every game in November,” Stackhouse said. “We just want to make sure that we are continuing to progress and get better and develop to where, when we get to January and February, we are playing our best basketball.”

To be optimistic, there’s still plenty of time to get quality wins, but that doesn’t mean the team can write off every bad loss on their nonconference schedule. Ultimately, the squad must use this time to get locked in individually and collectively so that we can see more plays like this:

On the court, while there’s concern over offensive production from shot choice to shooting splits to basic passing to out-of-the-box creativity, the Commodores have the personnel and coaching staff to solve this puzzle. And while there’s concern over defensive shutdowns and communication, Vanderbilt has length, energy and bench depth—the requisite ingredients for a strong defensive team.

Point being, the solutions to the Commodores’ problems are all in the building—a much different problem than Vanderbilt has had in years past. This is due to Stackhouse’s recruiting efforts. He has built his most talented team yet, but now he must work out how all the pieces fit together. This season should be exciting and daunting for the whole program, from Stackhouse down. Worst case scenario, Commodore fans can take solace in the fact that freshmen like Dia, Shelby, Dort, Smith and Lewis are already contributing and developing toward a bright future.

The Commodores face one of their toughest nonconference challenges next at the Paycom Wooden Legacy Tournament in Anaheim, California. They’ll start the event by facing Saint Mary’s College (No. 21 on KenPom), followed by a showdown with either Washginton (No. 120) or Fresno State (No. 122).