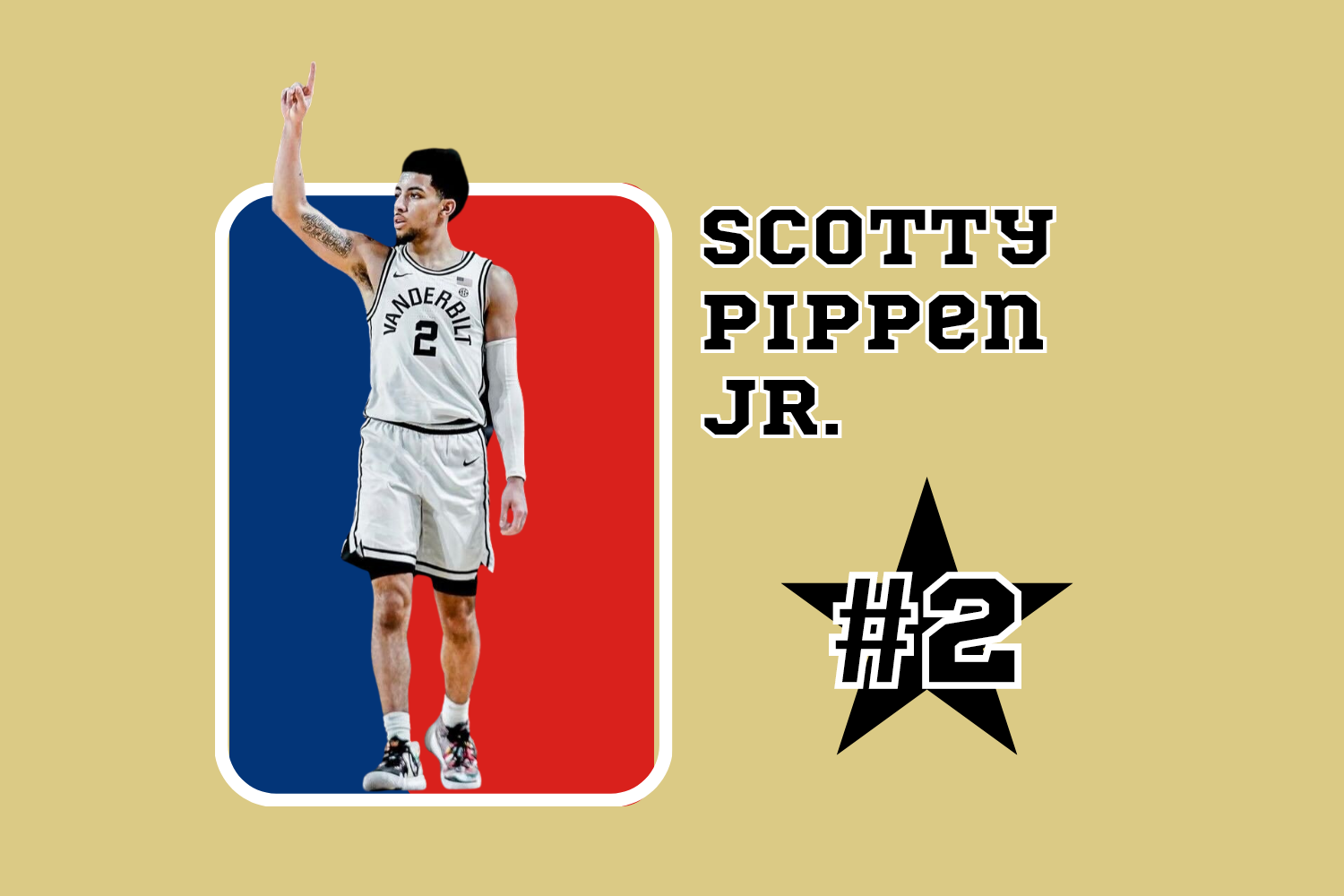 Scotty Pippen Jr. leaves Vanderbilt as one of the most decorated players in school history. (Hustler Multimedia/Alexa White) (Alexa White)

Scotty Pippen Jr. leaves Vanderbilt as one of the most decorated players in school history. (Hustler Multimedia/Alexa White)

After three outstanding years in Nashville, Vanderbilt’s star point guard is ready for the pros.

On June 23, the most talented amateur basketball players in the world will gather for the annual NBA Draft, and Vanderbilt basketball fans have only one question on their minds—will star point guard Scotty Pippen Jr. hear his name called?

If professional basketball teams still made their selections solely on collegiate-level production, that answer would be a resounding yes. But this isn’t your grandpa’s NBA–the game has gone global, and Pippen will need to compete with hundreds of outstanding players of a wide range of ages and paths to the league. Despite an undeniably stellar career at Vanderbilt, there is no guarantee that Pippen Jr. will hear his name called this weekend.

With three sensational seasons at Vanderbilt and a Hall-of-Fame last name under his belt, it’s easy to forget that Pippen Jr. was lightly recruited when he arrived at Vanderbilt in Fall 2019. Despite receiving uncommon media attention for a high school prospect—even in the new era of celebrity high school athletes—Pippen’s only other Power 5 offer besides Vanderbilt came from Washington State. Pippen’s freshman year also marked the arrival of another new face in Nashville–head coach Jerry Stackhouse.

Under the tutelage of one of college basketball’s all-time great scorers, Pippen showed great potential in his debut season. Although he shared the court with two future NBA draft picks in Aaron Nesmith and Saben Lee, Pippen finished second on Vanderbilt in total points. He also teased his deadeye shooting ability with a commendable 36% three-point clip. But his true breakthrough came the following year, in a spectacular sophomore campaign that cemented Pippen Jr. as a household name in college basketball.

In his sophomore year, Pippen went from second on the team in scoring to second in the SEC in scoring, putting up 20+ points in 12 different games and breaking a Vanderbilt sophomore record in the process. His standout season culminated in first-team All-SEC recognition and widespread belief that he was ready to move on from Vanderbilt to the NBA.

After testing the waters of the 2021 NBA Draft, Pippen Jr. ultimately decided to return to Vanderbilt for his junior season to improve his value to NBA scouts. In 2022, Pippen continued to produce and was named first-team All-SEC again. Despite this performance, he never got the chance to test his game in a high-pressure environment as Vanderbilt failed to qualify for the NCAA Tournament. With only days left before the draft, it remains as difficult as ever to forecast if Pippen has done enough to elevate his perception to NBA-ready.

At the NBA Draft Combine in May, Pippen measured in at exactly 6 feet (without shoes) and 180 pounds. While Combine measurements generally do not factor heavily into a team’s evaluation of a player, it was unfortunate to see Pippen’s height reduced significantly from his traditional 6’3” listing. With a clearer idea of Pippen’s physical profile, NBA scouts can now better assess his fit in the NBA and compare his style to other players of a similar build, such as Seth Curry, Devonte Graham and Kemba Walker.

On a more positive note, Pippen’s wingspan came in at 6’5.75,” a figure which could alleviate concerns about his ability to defend more athletic players at the next level. Even so, the outlook on Pippen’s physical measurements ranges from mediocre to concerning. Fortunately, the belief that Pippen could be an NBA player was never rooted in athletic potential. Instead, the respect he’s earned is predicated on his preternatural understanding of the game of basketball, effortlessly finding looks at all three levels and creating easy opportunities for his teammates. At the combine scrimmages, Pippen proved he can compete with the more highly ranked players in the draft despite his athletic limitations.

Pippen’s clearest leap toward NBA-level offense occurred between his freshman and sophomore seasons, jumping from 12 points and 3.6 assists to 20.8 and 4.9, respectively, while only playing two more minutes a game. Even more compelling to NBA scouts: his shooting percentages remained efficient despite doubling his shot attempts per game. In 2022, Pippen’s 3-point shooting percentage declined slightly, but it should not be a cause of too much concern due to an unfortunate slew of injuries. Pippen was tasked with shouldering an enormous offensive burden this past season, which is immediately evident given his usage rate. Pippen has the highest career usage rate in Vanderbilt basketball history at 31%; in other words, from 2019-22, 31% of Vanderbilt’s offensive plays ended with a shot, free throw or turnover from Pippen when he was on the floor.

The immediate value NBA scouts will see in Pippen comes from his contributions on the offensive end. Pippen was unquestionably one of the most talented offensive guards in college basketball over the last few seasons, demonstrating a methodical ability to find his spots and consistently provide high-volume scoring. Specifically, Pippen excels at an increasingly valued skill in the NBA: getting to the free throw line. With an array of crafty dribble moves and an almost supernatural ability to anticipate his defender’s next move, Pippen has mastered the art of getting into the paint and drawing contact before getting his shot off. Last season, Pippen led all of college basketball in free throw attempts (8.31), and he shot a respectable 76% from the line during his time at Vanderbilt.

With respect to Pippen’s early professional career, there are two near-certainties that provide a frame of reference for what his NBA contributions might look like. Given the athleticism and size of his contemporaries at the guard position, Pippen will almost certainly never be his team’s lead ball-handler. Secondly, when tasked with guarding bigger and more athletic ball-handlers, Pippen will almost certainly be a huge liability on defense. Fortunately, Pippen’s tenure at Vanderbilt is showed that he can be an elite scorer from outside the arc. Although his career 3-point percentage is a meager 34%, that figure is more a product of Pippen’s exhausting usage rate than his actual ability to shoot the ball. At the professional level, he will likely get much better looks as a secondary option and will have the opportunity to bump that number up considerably.

The question marks surrounding Pippen seem to stem from the same concern—the is only a mediocre athlete by NBA standards. This concern could limit him on offense and render him an easy target on defense. As a Commodore, Pippen needed to make plays above the rim to score. In the NBA, Pippen’s lack of aerial ability will make it much harder to beat more athletic defenders. It’s fair to question if Pippen will be able to maintain his lethal ability to get to the free throw line against more athletic defenses, especially those designed to keep guards outside of the paint. There’s also the possibility that Pippen’s respectable 3-point shooting will not hold up in the NBA, where the 3-point arc is set at a longer distance than in the NCAA. If Pippen is not an above-average 3-point shooter in the NBA, it is difficult to envision him lasting with any team.

On defense, Pippen is not projected to be an above-average option for teams looking to tighten their front line. In the SEC, Pippen could get by with his excellent basketball instincts and relative quickness. In the NBA, where Pippen will routinely be tasked with slowing down more explosive players, he will likely struggle to hold water.

While there are some legitimate concerns about his ability to adapt to the NBA, Pippen can take comfort in knowing many current and former professionals succeeded despite facing the same questions. Cameron Payne and Devonte Graham are both current players who share a similarly undersized profile as Pippen and a crafty play style designed to take advantage of their perceived weaknesses.

Like Pippen, Payne put up remarkable numbers in college but still faced skepticism due to his lack of athleticism. After struggling for a few years to adapt to playing without the ball in his hands, Payne has carved out a respectable backup guard role for the Phoenix Suns. Despite running the point in college, Devonte Graham has similarly transitioned into a more off-ball role since entering the league. With less pressure to direct his team’s offense, he has settled in as one of the league’s premier floor spacers, attempting a staggering 70.3% of his shots from 3-point range. Pippen will likely face the same growing pains as these two players if he gets the chance to transition to the professional level. 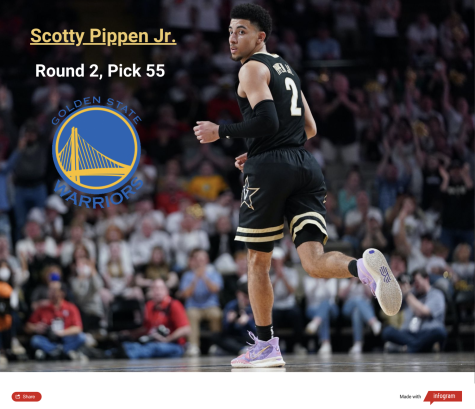 Because Pippen is not considered a first-round prospect, predicting the team that will call his name is a huge shot in the dark. Though Pippen benefits from entering the draft in a relatively weak year for point guards, the general consensus in the media is that he is not a top 50 prospect. One team that could theoretically take a swing on Pippen late in the second round is the 2022 NBA Champion Golden State Warriors. The Warriors already have three recent lottery picks (James Wiseman, Jonathan Kuminga and Moses Moody) ready to contribute, so they can afford to take a risk on Pippen Jr. with their second round pick. Furthermore, the Warriors organization understands the value of players who have spent their lives surrounded by professional basketball (see: Steph Curry, Klay Thompson, Gary Payton Jr., Otto Porter Jr.). The Warriors have a legendary track record with developing guards: a great environment for Pippen to transition to the league.

Whether Pippen is drafted by Golden State or ends up not getting drafted at all, he will surely get his opportunity to prove he belongs in the NBA. The NBA Draft will take place on Thursday, June 24 at 9 p.m. CDT at the Barclays Center in Brooklyn, New York.