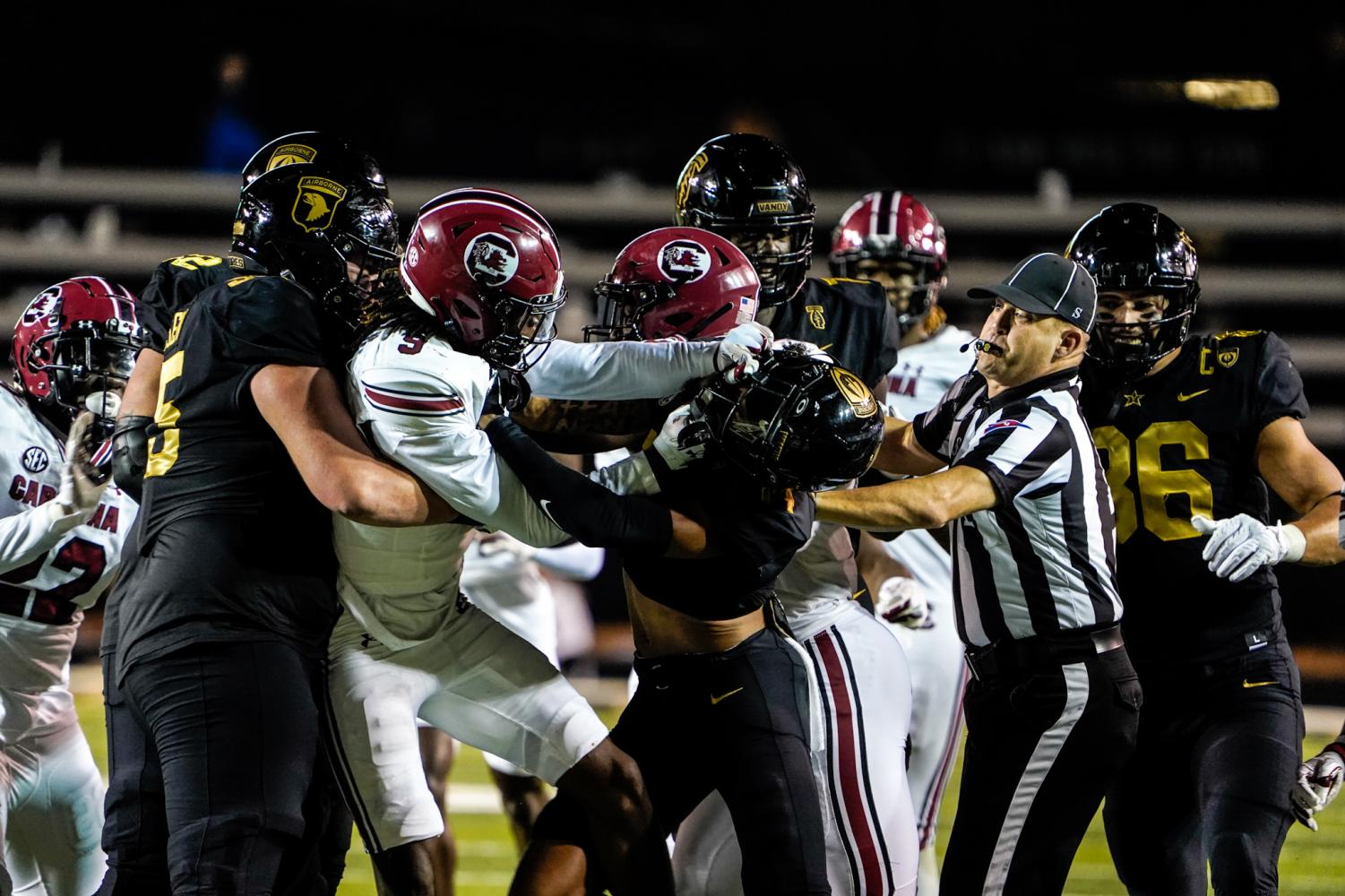 Feathers flew on the field, as captured on Nov. 5, 2022. (Hustler Multimedia/Miguel Beristain)

Feathers flew on the field, as captured on Nov. 5, 2022. (Hustler Multimedia/Miguel Beristain)

There have been better weekends for Vanderbilt football than this last one.

Coming off a much-needed bye week, Vanderbilt (3-6, 0-5) looked out of sorts, undisciplined and distracted against South Carolina (6-3, 3-3) in a 38-27 loss on Saturday night at FirstBank Stadium. In a battle of second-year coaches, South Carolina’s Shane Beamer outclassed Clark Lea’s Commodores to the tune of 492 yards of offense and 7.8 yards per play. The Gamecocks won the football game, the fight(s) on the field and the post game press conference.

Because for as nauseating as the Commodores’ mistake-riddled performance was—which included four turnovers, multiple touchdowns of 50+ yards allowed, more than one fight and a missed field goal—things were made worse by the cloud hanging over the Vanderbilt football program this weekend.

On Friday night, less than 24 hours before kickoff against South Carolina, a social media post from defensive backs coach Dan Jackson surfaced in which he defended Ye’s recent antisemitic and racist comments that have caused the rapper to lose endorsement deals with companies like Adidas and Gap.

“Kanye is two steps ahead of everyone,” Jackson’s comment read. “He’s not crazy. People try to silence him because he thinks for himself. People don’t want that. Rappers and athletes are taught they need to think the same as the media/politicians. If they have an opinion that is opposite the mainstream, they’re called crazy. More people need to wake up and speak their mind.”

Whatever intention Jackson meant by his statement, this doesn’t seem like the time to be uttering “Kanye is two steps ahead of everyone”, let alone as a representative of the football team and university. Lest we forget Jackson leads the second-worst passing defense in the country in terms of yards allowed.

Regardless of opinion on the matter, the fact that Jackson assumed his normal duties on Saturday night was unquestionably a distraction from the football game at hand. For a coach searching for his first SEC win in 13 tries that doesn’t seem like something you want to invite into your program the night before a game.

“Well, first of all, I don’t want to answer that question for Dan Jackson in terms of backing Kanye West’s comments,” Lea said in his postgame press conference. “What I will say is that Dan Jackson made a mistake, and I’m deeply disappointed by this situation. We want to make and we want to create an environment here where we have conversations around this and we want to have an environment where we learn in these situations too.”

It begs the question of how that conversation-oriented environment failed Daniel Martin and Maurice Edwards, two freshmen dismissed from the program in September, but saved coach Dan Jackson from facing any sort of repercussions.

Given the response (or lack thereof) from Lea and athletic director Candice Lee, there are going to be more questions on this situation sooner rather than later. That’s not what this program needs to be dealing with as it faces a mounting 26-game conference losing streak. For the first time in his tenure, Lea faces a critical upcoming month to get his program back on the rails after blowing his best two opportunities at an SEC win and igniting a PR nightmare. Fun stuff. On to Brunch.

Let’s start with the positives: Vanderbilt’s run game looked as good as it has in weeks on Saturday. Lead tailback Ray Davis had a career outing rushing for 167 yards on 20 attempts and hauling in a 5-yard touchdown grab. Mike Wright added 43 yards with his legs and Patrick Smith rushed for 29 yards on 13 carries as well. In the passing game, Quincy Skinner Jr. had a career game as well, reeling in touchdown passes of 66 and 9 yards.

Just two weeks after his worst called game of the year, Joey Lynch dialed up a nice gameplan against a South Carolina defense leading the conference in interceptions (9) and passes defended (36) coming into the game.

The ground attack was potent for each of the first three quarters as Vanderbilt racked up 211 of their 226 rushing yards in those frames before going into a desperation offense in the fourth quarter.

Key word: backs. Plural. As I’ve been calling for for weeks, Vanderbilt finally switched up the cadence of their tailback rotation letting Davis lead (20 carries), but having Smith (13 carries) let him stay fresh. The addition of Wright to the rotation—who subbed in for an injured AJ Swann for the final two quarters—didn’t hurt matters. 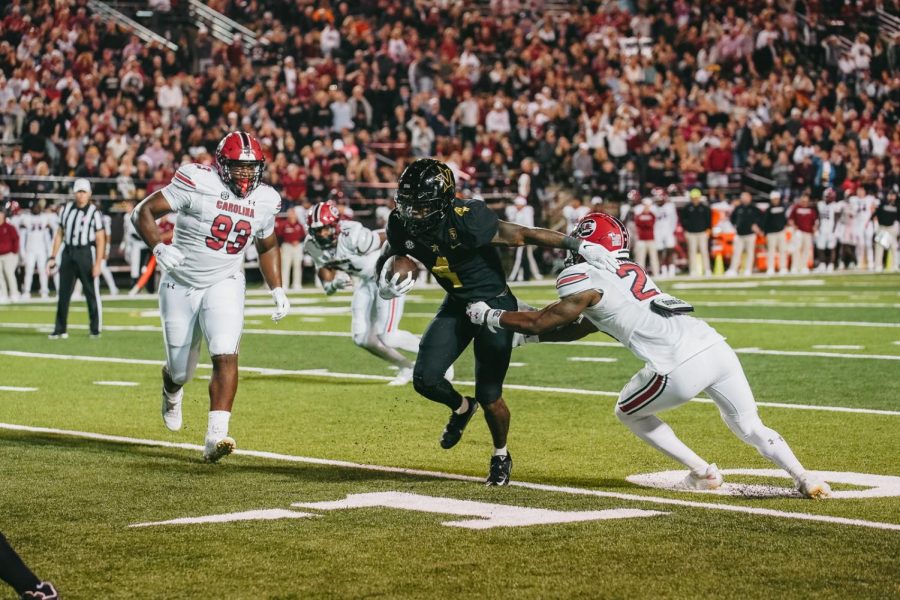 Swann was effective enough in this one to keep his job moving forward (10-18 for 127 yards and 2 TDs, 1 INT), but it’s clear that Wright helps out this ground attack and is one of Vanderbilt’s best 11 offensive players. His snap count should reflect that reality for the rest of the season.

Vanderbilt had no issue getting drives started and moving on Saturday, but finishing said drives was a backbreaking problem. The Commodores punted just twice, which resulted in the following conclusions to non-touchdown drives: interception, missed field goal, fumble, turnover on downs, fumble, interception.

It was a continuation of a larger trend for this offense in terms of the inability to put everything together. Despite some solid offensive performances this year, the Commodores have yet to play a complete game—a complement of passing and running and without turnovers—yet this season. Having watched Vanderbilt for the last four seasons, I know that this is a lot to ask, but Lynch’s group will have three more chances to do so.

An ancient tactic of football philosophy is the ground-and-pound scheme in which a team focuses on running the ball often and playing sound defense to supplement that offensive style. On Saturday, Vanderbilt checked one of those boxes, but very much failed to check the other.

After electing to receive the ball, Vanderbilt was subsequently pantsed by South Carolina in the opening quarter of the game. An early Commodore interception gave way to an easy 5-play, 70 yard touchdown drive featuring completions of 16 and 29 yards for Gamecock QB Spencer Rattler. The junior signal caller had easily his best performance of the year against the Commodore defense, completing 69% of his throws for three touchdowns and no interceptions. He came into the game with a 5:9 TD to INT ratio.

Vanderbilt scored on a big connection from AJ Swann to Quincy Skinner Jr. three plays later to even the score, but the Gamecocks controlled the rest of the opening stanza. In all, Beamer’s crew amassed 17 points and 149 yards in the opening quarter with 68 of those yards coming on a broken trick play that resulted in a touchdown.

The 17 points allowed by the Commodores in the first quarter equaled South Carolina’s average total offensive output in SEC play thus far (17.7 points per game); Beamer’s crew came into the game as one of the worst offensive units in the league.

In total, the Gamecocks racked up nearly 500 yards of offense and scored on six of their first nine drives. Two weeks after the defense’s best performance at Missouri, this was a step-back for Nick Howell’s group. It was the sixth time in nine games that Vanderbilt has allowed 30+ points with Hawaii (10 points), Northern Illinois (28) and Missouri (17) being the few offenses not to find success against a Howell defense.

Elsewhere, Lea’s former hand-picked defensive coordinator Jesse Minter is leading the no. 3 unit in total defense at Michigan in 2022. Vanderbilt held South Carolina to 21 points in Columbia last season, albeit against a backup quarterback.

At last, Vanderbilt has made it to the final quadrant of their schedule in 2022. With both the most grueling and most winnable portions of their SEC schedule behind them, the Commodores will turn their attention to Kentucky, Florida and Tennessee.

Kentucky and star quarterback Will Levis have had an up-and-down season after starting out 4-0 and then losing three of their next five. The Wildcats have only played three common opponents with Vanderbilt in 2022: Northern Illinois (31-23, win), South Carolina (24-14, loss) and Missouri (21-17, win). Vanderbilt hung in with Kentucky in their last visit to Lexington, losing 38-35.

Florida, on paper, presents another opponent who has been inconsistent this year. The Gators sit at just 5-4, but each of their losses have come against ranked opponents. Billy Napier’s group is coming off their best win of the season in week ten, a 41-24 victory over the in-shambles Texas A&M program.

And then there’s Tennessee who, despite the opinion of the Neyland faithful that this Volunteer team is the greatest since 2019 LSU, got trounced by Georgia this weekend, 27-13. I’d like to add that Tennessee scored a garbage time touchdown with four minutes to go to make that score look better.

After the high of the Hawaii win, I dared to ask if an SEC win, or maybe even two (I was really naive), was on the table. That dream has become increasingly less feasible, but conversely more important. Snapping the team’s 26-game losing streak would be a massive weight off the program’s collective shoulders and likely help retain a number of Lea’s recruits until signing day this winter.

We’ll see what punches this team has left. If it’s anything like the ones thrown at South Carolina (both literally and figuratively), this program might be in trouble.