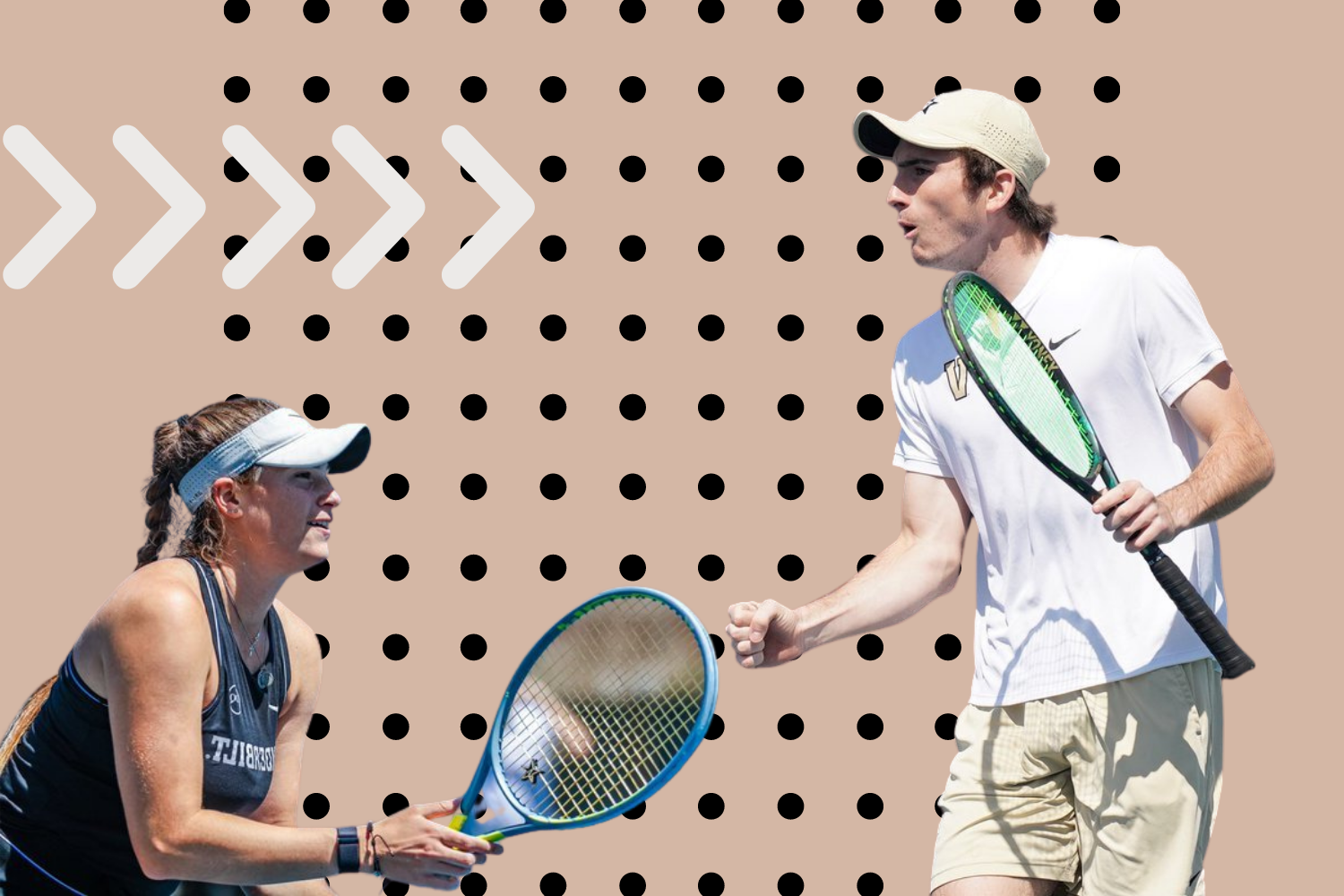 Kenny Chesney and Ice Cream for Breakfast: How Siblings Anna and Michael Ross Found Themselves Together at Vanderbilt

Siblings and tennis players Anna and Michael Ross speak about their relationship and the experiences that brought them both to Vanderbilt.

What started with a Kenny Chesney concert has led to the young tennis careers of two siblings and Vanderbilt student-athletes, Anna and Michael Ross. Their story starts when Anna was in the eighth grade, on a road trip with her family to Nashville from her hometown of Columbia, South Carolina. An avid country music fan, Anna came to see a Kenny Chesney concert and ended up stumbling upon the Vanderbilt campus for a tour.

“I fell in love with both Nashville and Vanderbilt,” Anna told The Hustler. “We took our own little walking tour of the campus, and I asked my uncle, “Is this a good school?’”

Anna’s first impression of Vanderbilt stuck with her and motivated her journey forward.

Fortunately, her hope to play collegiate sports was supported by a family history of athletics. Anna’s mom played golf at Indiana University, her grandfather played tennis at Duke, while her dad Ed and uncle John both played tennis at Southern Methodist University. John later would compete in Grand Slams as a professional.

“I grew up where there were old tennis rackets in our garage, my dad’s trophies, newspapers about my dad, my uncle, my grandpa,” Anna said. “Growing up, [tennis] was there. It was natural in our conversations.”

Although she had picked up a racket for the first time at the age of three or four, her family’s background in tennis did not prevent her from exploring other interests. She played basketball, softball, golf and volleyball, before choosing tennis to pursue at a competitive level.

“[Playing tennis] just started out as a fun thing to do to get exercise. And it was easy to bond with my dad and my brothers over that for sure,” Anna said. “We all just fell in love with the game.”

Once the siblings found a love for the sport, the experience of her dad and the competition between Eddie, Anna and Michael drove the Ross family to their current success.

“And they never forced us into it. It was just organic,” Anna said.

Eddie, the eldest by two years, followed in the footsteps of his dad and uncle by committing to play at SMU around the same time that Anna started going through tennis recruitment. She still had Vanderbilt at the top of her list, and a strong finish to her junior year earned her an offer. To this day, Anna remains a strong advocate of the program.

“We have the best coaches in the country, the curriculum is awesome, and the rigor of this school is unbelievable,” Anna said.

The fact that Anna and Michael ended up together was no accident—although it was less than planned. Their proximity in age has always kept Anna and Michael close in their relationship as they support one another through their time as student-athletes.

“The entirety of high school we were in the same schoolhouse, doing different work, but sitting at the same table, practicing together, going home together, eating together,” Anna said. “We got to bond over wins and losses, regardless of what was going on. He was always there.”

When Michael began his own tennis recruitment process, he visited Anna during her first year here and felt a similar love for the city and culture on West End. Anna persisted in recruiting him once it became a possibility.

“When he came to visit and watch me play, he fell in love with Nashville,” Anna said. “When the realization hit, like wait, we could do this. So I definitely pressed.”

The bond built over years of competing alongside each other has remained in their time at Vanderbilt.

“It’s sometimes hard for me to watch her because I care so much,” Michael said. “I’m so nervous when she plays, and I think it’s the same for her.”

But Michael is grateful nonetheless for the opportunity to play tennis while hearing his sister cheer him on from the sidelines, as she often does. Anna’s voice in his development has been important, as Michael has learned the value of staying mentally strong and managing emotions through lengthy, arduous matches.

“Even hearing my sister’s voice [at a match], it doesn’t happen for most people,” Michael said. “[Anna] always reminds me: you got to stay mentally strong…People don’t see that the mental side of tennis is maybe the biggest part.”

Even more than matches, Michael emphasized the value of living just a short walk away from his sister as he made his adjustment to college life at Vanderbilt.

“I talk about personal stuff with her more than probably anyone I know,” Michael said. “She’s always there for me.”

Anna echoed the same sentiment when speaking about their relationship, on and off the court.

“Wins, losses, regardless of what was going on, he was always there,” Anna said. “So I think that having him here, it almost feels natural.”

As with any sibling relationship though, there is a healthy rivalry—as Anna shared in response to her brother’s claim that he is a better tennis player than her.

“I’ll give him this one: he is uber-athletic and crazy talented at tennis,” Anna said. “But that’s not to say that on a good day, I can’t give him a run for his money.”

At the very least, Anna has the upper hand of an older sibling and with it, a wealth of embarrassing stories about her younger brother.

“[Michael] would like to eat ice cream for breakfast before school,” Anna said. “You know, the breakfast of champions.”

Whatever the secret is, it is working for the Ross duo. Anna, a junior, is currently ranked No. 44 in Division I for singles and No. 39 in doubles alongside sophomore Holly Staff, while Michael has already risen to No. 76 in doubles as a freshman with junior Siim Troost as his partner.

Anna is often competing on Court 1 in singles for the women’s team, so her 8-7 record includes a 3-3 record against nationally-ranked competitors, including a dramatic three-set victory over No. 30 Rebeka Mertena of Tennessee and a close three-set defeat against No. 2 Sarah Hamner of South Carolina. In doubles, Anna is 11-6 overall, but 4-1 with Staff as her partner.

Michael has had a slower start to his singles career with a 5-8 overall record, 2-1 in duals on Court 6. However, he and partner Siim Troost have seen consistent time in doubles throughout the season and lead the team with a 17-14 record overall, 13-8 on Court 1 of duals.

Anna and Michael will finish their regular seasons with the Vanderbilt women’s and men’s teams on Sunday, April 17 against Ole Miss at 11:00 a.m. CDT outside the Currey Center and 1:00 p.m. CDT in Oxford, MS, respectively.

The availability of ice cream for the team breakfast is to be determined.