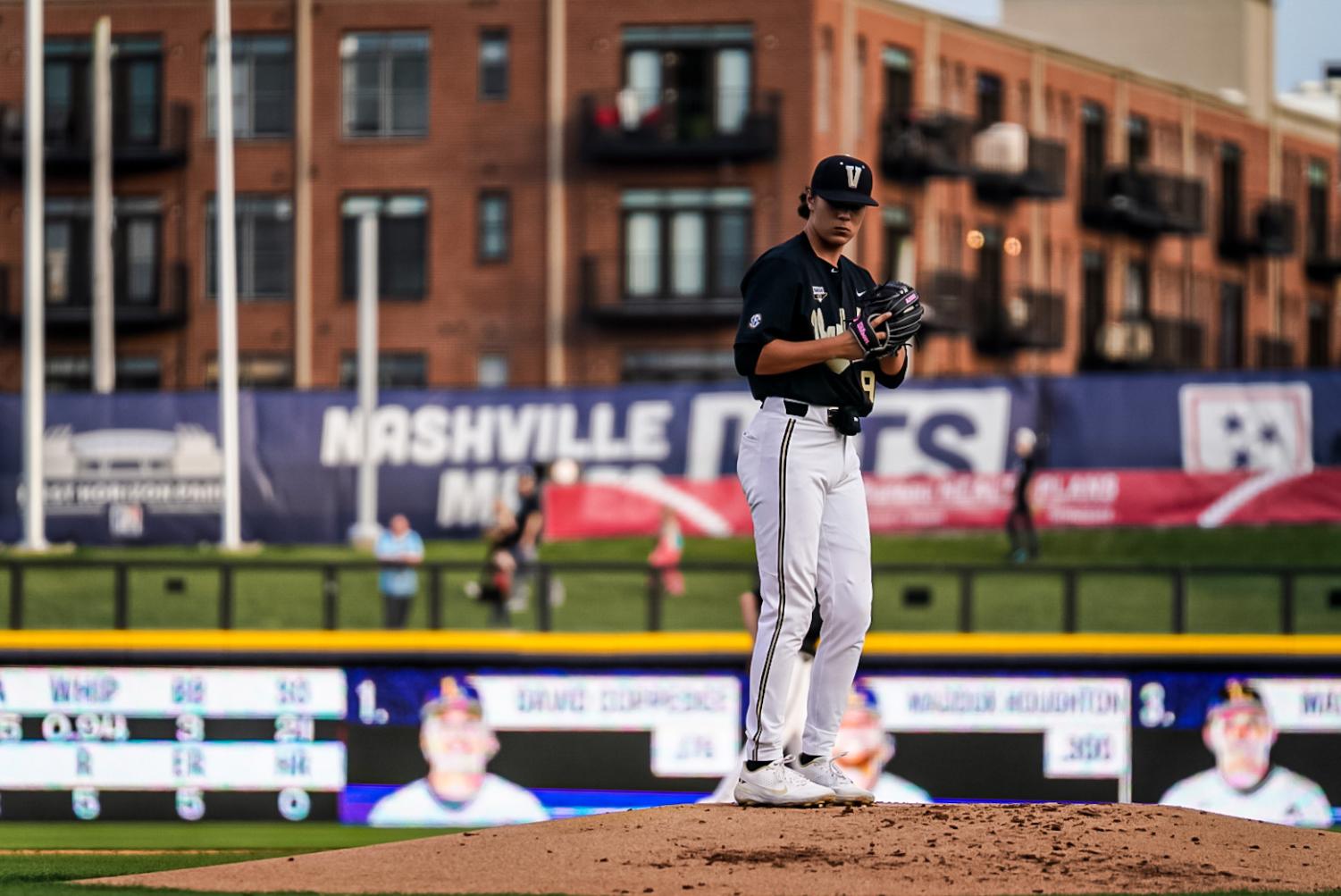 Not many freshmen get the chance to start games for a college baseball program of Vanderbilt’s caliber, but Devin Futrell has emerged as a staple in the VandyBoys’ midweek rotation.

To say Devin Futrell has had an outstanding freshman season for the VandyBoys would be an understatement. Not only has the Florida native burst onto the scene to lead his squad with a 2.11 ERA, but he is also tied for second in wins among pitchers nationally with eight.

While his fellow freshman southpaw and highly touted recruit Carter Holton has become a staple in the weekend rotation, Futrell has perhaps been head coach Tim Corbin’s most consistent young pitcher. He has started nine of the VandyBoys’ midweek contests this season and has been a core reason why the Commodores are riding a 29-game midweek winning streak dating back to last season.

His early success shouldn’t shock Vanderbilt fans, however, as he has long been connected to Corbin and the program—continuing a pipeline from his high school, American Heritage in Florida, which has sent a number of players to Vanderbilt, including Enrique Bradfield Jr., Nelson Berkwich and Gavin Casas.

As a freshman at American Heritage in 2017, Futrell came to Vanderbilt for a prospect camp where he had a chance to work with Corbin and get a feel for the program.

“I was in talks with my [high school] coach, and he was talking to Corbin, and he actually set things up so I could come to a camp,” Futrell told The Hustler. “Since then, I’d been talking to the coaches, and I committed like a month later.”

As just a 15-year-old, Futrell committed to Vanderbilt, which he described as “his dream school.” He admired the university’s baseball facilities, coaches, former players and strong academic programs. Plus, Futrell notes he has gotten closer with other American Heritage alumni on the team since arriving on campus.

Futrell has stepped into a role many first-years before him have absorbed: a midweek starting spot. Inspired by the success of former VandyBoys such as Walker Buehler, Kumar Rocker, Jack Leiter and others, Futrell said he has been humbled to take center stage in Nashville at such an early point of his career.

“It’s pretty special. It’s a blessing to be able to be here in the first place and to be tagged along with those names is even more of a blessing,” Futrell said. “It’s pretty awesome to roll through here and hopefully be known as as big of a name as they are.”

The Florida native certainly has some of the pitching velocity that his predecessors used over the years, but his control has made him even more unique than many VandyBoys freshmen. In over 42 innings pitched, he has surrendered just five walks all year—the fewest of any Vanderbilt pitcher who has thrown over 25 innings this season.

“I’ve been like that since I was like 12,” Futrell said of his control. “Just knowing how hard it is to hit in general—the science behind it is insane. Just throwing the ball over the zone and making them get themselves out rather than me trying to get them out because that leads to walks.”

While Futrell’s attacking approach to pitching has helped fuel his success, his competitive drive has also shown through in his first spring on West End.

“You just have to go out there and give everything you have, control what you can control and overall dominate your day,” Futrell said as to his pitching mentality. “I’ve been doing that and it’s been working pretty well but just focusing on growth day-to-day and hopefully keeping my win streak going.”

Having won five starts in a row—including a complete-game shutout against Lipscomb on March 29—the lefty has clearly settled into a comfortable position in the midweek. But with the schedule thinning and the postseason around the corner, it’s only a matter of time before Futrell gets a taste of SEC baseball. Corbin’s team has just four SEC series and three midweek showdowns left before the SEC Tournament, but the skipper should no doubt be confident that his freshman is up for the task of college baseball’s best hitters.

“He’s just very consistent in his work habits and how he pitches out here to get us five; six innings every Tuesday is such a gift in so many ways,” Corbin said after Futrell claimed his eighth win over Tennessee Tech on April 19. “It keeps the bullpen down and stabilizes you for the weekend.”

As the VandyBoys prepare for the stretch run of their 2022 season, they will need contributions from each and every corner of their roster to find the success of last year’s team. Don’t be surprised if Futrell is a key factor as Vanderbilt vies for its third consecutive College World Series championship appearance.

The Vanderbilt Hustler welcomes and encourages readers to engage with content and express opinions through the comment sections on our website and social media platforms. The Hustler reserves the right to remove comments that contain vulgarity, hate speech, personal attacks or that appear to be spam, commercial promotion or impersonation. The comment sections are moderated by our Editor-in-Chief, Rachael Perrotta, and our Social Media Director, Chloe Postlewaite. You can reach them at [email protected] and [email protected]
All The Vanderbilt Hustler picks Reader picks Sort: Newest
Subscribe
Login
1 Comment
Newest
Oldest Most Voted
Inline Feedbacks
View all comments
A
Adam Lloyd

He is a star in making!