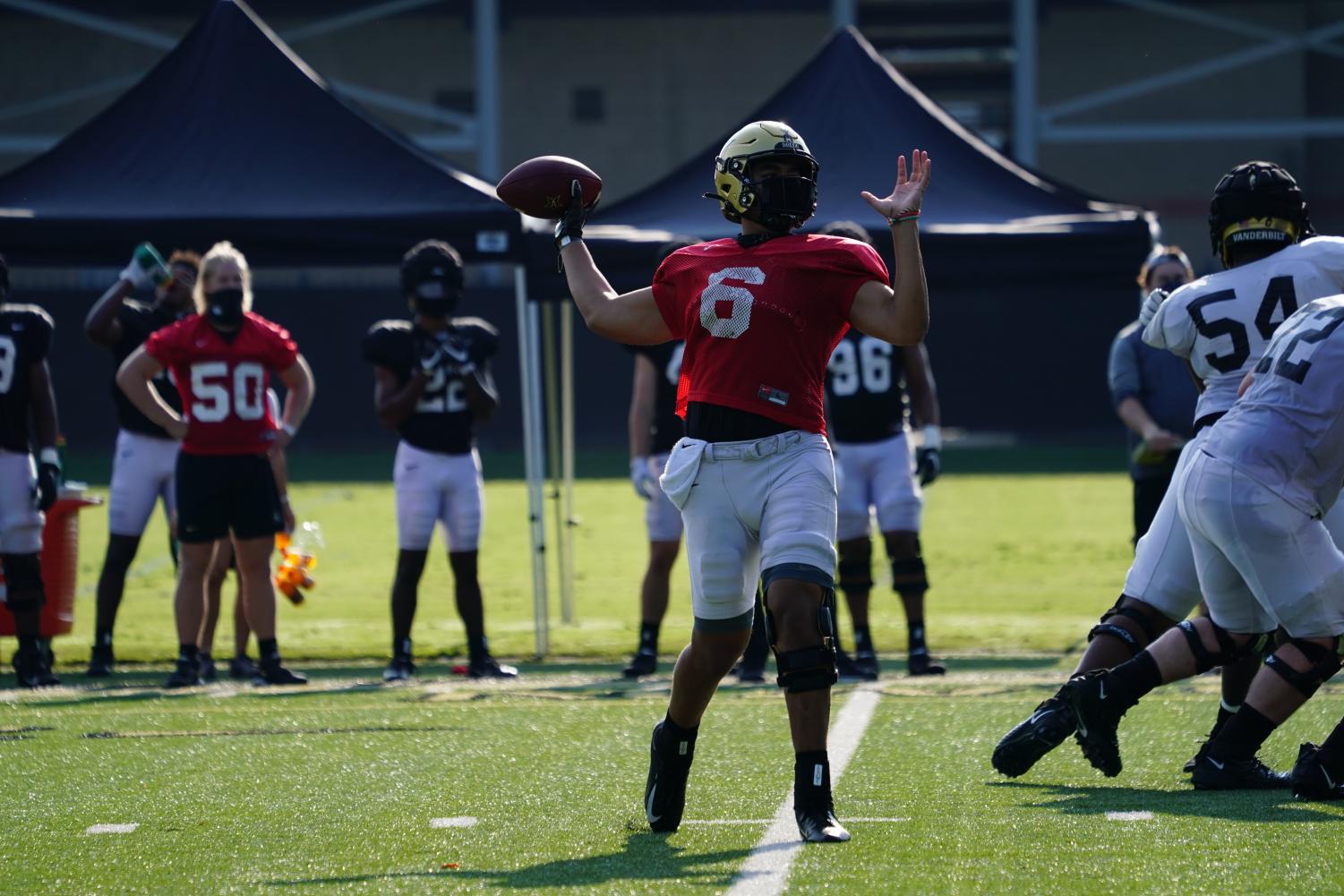 QB Chronicles: The Moose is Loose

What’s the best way to prepare for a four-way battle for starting quarterback?

In Jeremy Moussa’s case, he spent the summer rehabbing from a broken ankle he sustained last fall while throwing to NFL wide receivers such as Keenan Allen.

Not a bad class for summer school.

Practicing regularly with NFL talent drove Moussa to get better every day.

“You can see just how meticulous they are in their work and their attention to detail,” Moussa said,“They’re really intentional with their work.”

‘Moose,’ as Moussa has gone by for as long as he can remember, is in his first season at Vanderbilt after spending the 2018 season at the University of Hawaii and the 2019 season in junior college at San Bernardino Valley College.

He threw for 3,179 yards and 37 touchdowns to only nine interceptions in nine games at SBVC last season. The junior broke his ankle in the team’s ninth game of the season, just as his recruiting process was heating up.

“I didn’t even know if schools were gonna want to take me after I just broke my ankle,” Moussa said. “I mean that’s a drastic injury, and it takes a good couple months to come back from that.”

Vanderbilt had recruited Moussa since the third week of his junior college season and stayed in contact after his injury.

“Vanderbilt was a school that believed in me and believed that I had the ability to play at this level,” Moussa said. “And they were going to give me the opportunity to go out and try and win the starting job.”

Moose arrived on campus in January, but because his ankle was still healing, he was limited in the few spring practices Vanderbilt had before COVID cancellations.

“Before we all left for COVID and went back home,” he said. “I was probably at around 80-85% [of where I was pre-injury], so I was getting back to where I wanted to be. But I still wasn’t able to participate in everything I wanted. Being able to be in the meeting rooms with Coach Fitch and Ken [Seals] and Jack [Bowen], it was good just to get a grasp of the playbook.”

Offensive coordinator Todd Fitch praised Moussa for his knowledge of the playbook in a press conference on Thursday Sept. 8.

“He’s sat in meeting rooms, and he understands it pretty well,” Fitch said. “That’s a combination of A) being here in the spring and sitting in those meetings in the spring and then B) just his makeup and where he’s been I think has helped him on both ends.”

The junior is learning his third offensive scheme in three years at the collegiate level. Moussa played in a run-and-shoot offense at Hawaii his freshman year before running a West Coast offense at SBVC as a sophomore. Vanderbilt will run a spread offense in Fitch’s first season with the team.

Hawaii’s run-and-shoot offense under former head coach Nick Rolovich depended on both quarterbacks and receivers reading coverages. There were four or five different options on every route that can be adjusted to take advantage of holes in defensive schemes.

“In junior college, there’s a big talent disparity,” Moussa said. “Our goal over there was just to get the ball quick and let people who can make plays touch the ball.”

Vanderbilt’s offensive philosophy is similar to his junior college’s goal of taking advantage of the talent each team has. First-year offensive coordinator Todd Fitch is known for his high-scoring spread offense.

Moose brings two years of college experience and a love of competition to the starting quarterback battle.

“When I got to Hawaii, it was kind of the same situation. The starter from the year before had transferred. It was me, another freshman and a redshirt sophomore all battling for the same spot,” Moussa said. “I was used to going in to practice every day having to perform or else you’re going to get pulled out of the competition real easy.”

He’s a pocket passer who can run to pick up first downs when necessary, but he is best known for his strong arm.

“He asks good questions, has good arm talent also,” Fitch said. “I think those two things jump out when you think about Jeremy.”

His junior college tape showcases his strong arm and accuracy on deep passes as well as his good decision-making ability.

Derek Mason is not expected to announce the starting quarterback for the Sept. 26 opener against Texas A&M until gameday. Moussa is healthy after spending the summer rehabbing his ankle with his father, a physical therapist. With a firm grasp on the playbook and possibly the strongest arm on the team, Moussa has a shot at taking the first snaps of the season at Kyle Field.