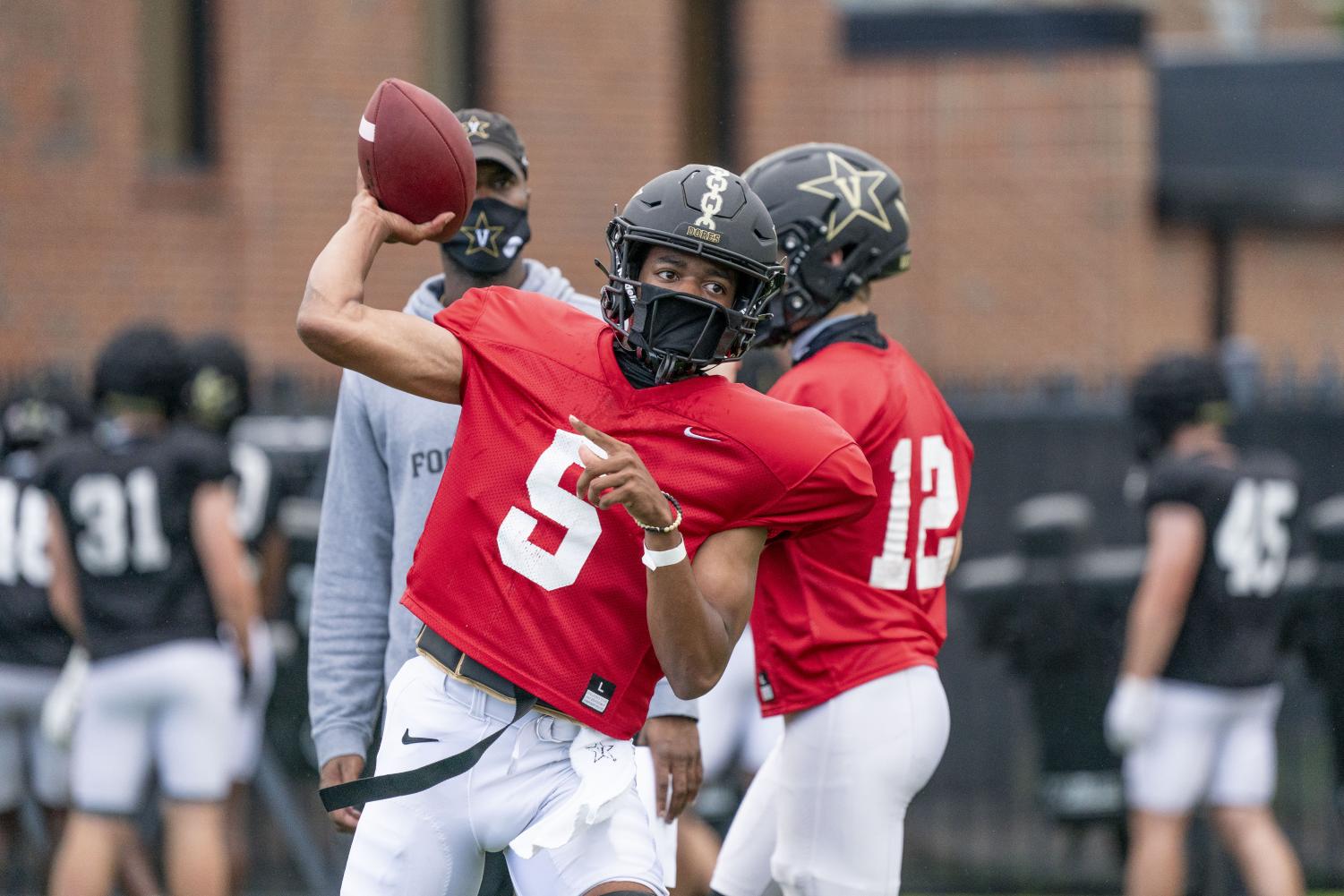 QB Chronicles: Moving at the speed of Wright

Mike Wright has the speed, the arm and the intangibles. All he wants is a chance to prove it.

Mike Wright lives by a simple cliché, a phrase we’ve all heard mentors, teachers and coaches utter one too many times.

“In football and in life,” Wright says, “you’re going to make mistakes.”

“It’s just about how you bounce back from it.”

Put a hurdle in his path. Throw a defender on his back. Push him to the ground—you will not change Wright’s course. He’ll jump right over it. He’ll run right past it. He will bounce back up.

And rest assured, he will win.

One moment stood out to Ryan Davis, a coach at Woodward Academy, Wright’s alma mater. Wright starred in both football and track in high school, and Coach Davis—the defensive coordinator for football, and the sprinters and hurdlers coach for track—was there to witness it all.

Wright was running the second leg of a 4×100 meter relay in a track meet. But before he could even start running, he found himself in a predicament.

“There was just a bad, bad exchange between the first guy and Mike,” Davis says. “Mike couldn’t get a hold of the baton, and he and the first runner got tripped up on the exchange. Mike fell on the ground.”

A man of his word, Wright bounced back. Even after he was knocked down, literally, with his skin scraping against the concrete track in the middle of a relay race.

“Mike fell hard after getting tripped up,” Coach Davis says. “He skinned his arm up on the track and he’s rolling around on the ground. He could’ve seriously hurt himself. At that point, it seemed like all the other runners were halfway through their next lap.”

Davis takes a long pause, sighs and chuckles to himself before continuing.

“But then Mike picks up the baton, gets up, and runs everybody down,” Davis’ voice crescendos with emphasis. “Catches every single one of them. That was one of those ‘wow’ moments. I couldn’t believe what I saw.”

On the gridiron, things were no different. Wright never let a mishap weigh him down.

In his senior year of high school, he propelled Woodward to the third round of the Georgia state playoffs. Their next task, though, was as tough as it gets: an away game at Cartersville, a Georgia powerhouse. Woodward quickly found itself losing by 21 points as the first half reached its end.

And to make matters worse, Wright threw an interception right before halftime.

“[During halftime,] some people were looking around the locker room like ‘dang, this is our last time playing with each other,’” Wright recalls.

But Wright wouldn’t let that interception define him. He wouldn’t let it end his high school football career.

“There’s gonna be—knock on wood—but there’s gonna be moments. I’m gonna throw an interception at Vanderbilt. I’m gonna have a fumble here and there, but you can’t wallow in it. You can’t just sit in it. You have to bounce back. You have to live to fight another day because you’ve still got another play,” Wright says. “You as a quarterback and you as a player, you just have to say, ‘Alright, I made a mistake, now squash it and let’s move on.’”

That’s exactly what happened against Cartersville.

“We put together a comeback win,” he says nonchalantly. “With probably about 35 seconds left to go, I threw a game-winning seam route. Good catch, and so we got a chance to beat Cartersville, on their home field, in a third-round playoff game. That was probably one of the coolest moments ever.”

Now a true freshman at Vanderbilt, Wright hopes to win the starting quarterback job. But his main goal is to do whatever it takes to help the team win.

The Georgia native, the starting quarterback hopeful, possibly the fastest signal-caller Vanderbilt has ever seen—this is not someone who slows down. That’s why he loved running track.

“It’s just you. You control the outcome. It’s only you running in the lane,” Wright says. “I can say ‘Hey, I beat you.’ And as a competitor, that was one of the greatest moments ever: when I can just say, ‘Alright, I won. Alright, I got you.’”

He wants to win for Vanderbilt.

So in the spring of 2020, when Wright lined up on the track for a high school race only to find then-Tennessee football commit Doneiko Slaughter in the lane next to his, that team mentality kicked in. Track may be an individual sport, there may have been individual disrespect—in fact, according to Coach Davis, a couple of writers from recruiting websites 247Sports and Rivals came to the race “not to see Wright. They only cared to see Slaughter”—but Wright didn’t think individually.

He thought about Vanderbilt, his team.

“Before the race,” Wright recalls, “There’s some trash talking going on. [Slaughter said], ‘Hey, I heard you’re going to Vandy. Just letting you know I’m gonna have to beat you like these next four years.’ And for some reason, I don’t know what it was, it just clicked in my head, I was like, ‘Alright, I don’t care about the time I run. As long as I beat this guy beside me.’ I said to myself, ‘Listen, this is bigger than Mike Wright at this point. I got to do this for Vanderbilt football right here. Vanderbilt versus Tennessee.’”

Wright won the race. He beat Slaughter, and Vanderbilt prevailed.

It’s easy to get lost in the accomplishments of his decorated track career, but Wright is a football player first. He always has been. Ever since his youth football days, when his dad—also the head coach—lined him up at quarterback, Wright knew what he was destined to do.

“That’s how I started playing quarterback, and it was fun,” he says. “I fell in love with just being out there. I’ve always played with my little brother. He’s always played up an age group.”

His brother is Alan ‘Taco’ Wright. Taco, now a senior in high school, also committed to Vanderbilt back in June. For the first time in years, Mike will play a season of football without his brother. They’ll be reunited soon though.

“Like I always say: he’s my brother, but that’s my best friend, too,” Mike says.

Taco echoed Mike’s sentiment. He says he speaks to Mike, his best friend, for at least two or three hours a day and recently submitted a paper in which he wrote about Mike as his idol, mentor and best friend.

If not for each other, Taco says, they might not be where they are today. Over the years, Taco claims he’s helped mold Mike into a dynamic quarterback; conversely, Mike developed Taco into a positionless, talented, football enigma.

Taco may be listed as a defensive back, but when Mike is asked what position his brother plays best, he responds, “football,” because in high school, Taco lined up as kick returner, safety, defensive back, slot receiver, outside receiver, cornerback and even running back.

According to Taco, Mike’s leadership is responsible for his growth and versatility.

“Mike’s leadership is what makes everyone around him better. He’s a natural born leader. If you Google that phrase, you’ll find Mike as the first result.”

Mike’s leadership knew no boundaries. Even off the field, after getting home from Friday night games at around midnight, Mike would stay up until past 2 a.m. watching the film, dissecting each play. He’d do the same on Saturday. Then again with the whole team on Sunday. Then he’d get back from the team film session and watch it again.

“He would make me watch the entire game so many times, it was crazy,” Taco says. “He even made us watch the timeouts. Back then, I was young. I didn’t understand it, so I kept asking him, ‘Mike, why do we keep doing the same thing every week?’ Then Mike kept telling me, ‘You’ll see. You’ll see one day.’ And I finally understand. I finally figured out why we’re doing this. Now, we’ll never make the same mistake twice.”

Mike’s leadership applies directly to his position. As a quarterback, Wright has grown accustomed to leading his offense. But as Vanderbilt’s quarterback battle heats up, fans have wondered: what if he used that leadership elsewhere? What if this freakish athlete could line up at another position, much like Taco?

That noise doesn’t get to Wright. He hasn’t even thought about playing another position—but he has no doubts he could.

“I’ve never really thought about it personally. There have been people who’ve kind of been in my ear like, ‘Hey, you could [switch positions].’ And I’m just like, ‘Yeah, I know I could. But I could also be that good of a quarterback,’” he says. “I know there’s a lot of people who just because they’re fast, they have athleticism, you always kind of hear people say, ‘He would be a great receiver,’ or ‘He could play DB.’ Yeah, well we could play quarterback, too.”

Coach Davis agrees: Wright is fully capable of playing other positions, but that doesn’t mean he should. He dismissed the idea with laughter and suggested that all the naysayers simply watch Mike’s high school film.

“Then try to tell me he should play another position,” Davis says. “He can throw, he can run, he’s a leader, he’s smart, he checks every single box. I would’ve loved to have Mike in my secondary. Actually, when we played against Cartersville, our starting cornerback got injured. I’d always joke with our head coach and offensive coordinator, ‘Hey, can you give me Mike Wright at DB to win the game?’”

Only that time, they did.

“The last two series of the Cartersville game, it was a shootout. They had a great quarterback committed to Louisville, they had a bunch of D-I players. And we seriously brought Mike in to play cornerback the last few series to win the ballgame,” Davis says. “So could he play another position? 110%, easily. But the kid is a quarterback, always has been, always wanted to be and he wants to prove he can do it. I know he will.”

And fittingly, Mike has learned a lesson or two from Newton. He played on Newton’s seven-on-seven spring football league in Atlanta and says that Cam was there to watch every single Saturday practice.

“Picking [Cam’s] brain apart, getting on the board with him and the stuff he’s taught me, it’s just awesome,” Wright says. “Like, I have the ability just to call him on the phone and say ‘Hey Cam, how’s everything going?’”

Since moving into Vanderbilt, Wright and Newton have done just that.

“He’s checked up on me a few times [since move-in]. Just asking me how everything’s going. One day we went over some different plays, like ‘Hey, Cam, so we got this play right here, we got this play right there, so how do you do that, how do you go through this.’ Awesome stuff like that. And so, just like that and you know I’m asking him ‘Hey, how’s New England? How’s everything going? He’s played a huge role in the advancement of my career.’”

Like Cam, Wright is a unique quarterback. He can run. He can pass. He can make decisions on the move and he can adapt to the playbook quickly, according to his high school coaches.

All he wants is the chance to prove it.