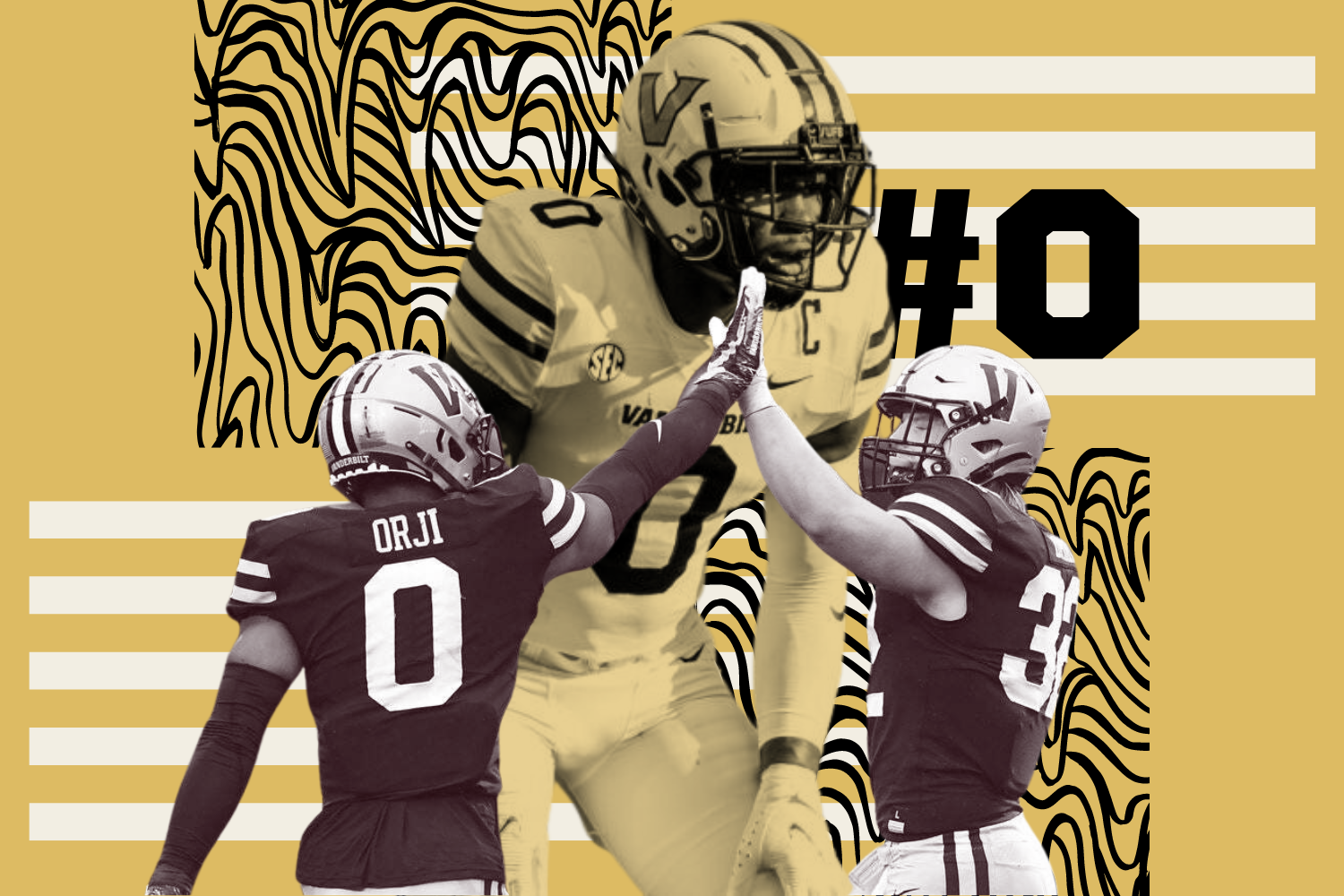 Anfernee Orji’s quiet confidence has led to a succesful career on West End as a commander of Vanderbilt’s defense. (Hustler Multimedia/Alexa White)

Senior Anfernee Orji’s time on West End is waning, but his impact on Vanderbilt football is indelible

Orji’s NFL draft stock has skyrocketed this season as the linebacker has proven to be a quarterback's worst nightmare and a run-stopping monster.

“I’m going to miss the true brotherhood that we built here.”

Anfernee Orji, a leader on Vanderbilt’s football team, has embraced the key pillars of Clark Lea’s regime and has been vital in developing a championship culture on West End. Orji’s days as a Commodore are waning, but he has expressed his gratitude for being a part of Vanderbilt football’s transformation in the past four years.

For Orji, making it to an NFL roster would be a dream come true, and he knows that he’s ready to compete at the professional level. Orji’s draft stock has completely skyrocketed this season as the captain has taken command of the SEC, ranking second in the conference in tackles with 93.

“I’m able to understand the game quickly. I love the game, obviously. I like studying the game,” Orji told The Hustler, “Coach Lea has helped me develop so much. Being able to trust myself, make plays and trust my teammates that we’re all going to be where we are supposed to be [is crucial].”

Orji, a four-star recruit of former Vanderbilt head coach Derek Mason, stayed with the program when it was announced at the end of the 2020 season that the Commodores were changing directions and hiring a new coaching staff. Under Orji’s first year in Clark Lea’s defense, the Texas native thrived, starting all 12 games for the Commodores and leading the team with 93 tackles and 13 tackles for loss. Thanks to a spectacular 2021 campaign, Orji was placed on the Bednarik Award Watch List, the Butkus Award Watch List and the coaches’ All-SEC list before the 2022 season.

Although Orji acknowledged that his preseason accolades were a sign of respect from the entire nation, he would not allow them to distract from his play on the field—a mentality he has stuck with since then. To start his senior season, Orji helped the Commodores defeat Hawaii 63-10 by returning a fumble 28 yards to turn the tide of the game. For Orji, the next six games were nothing short of magnificent, as he averaged 11.5 total tackles per game in that span.

“It’s cool, it’s a great honor [being named to the preseason ALL-SEC list], but you have to earn it every day,” Orji said before the season. “Coach says you just have to go every day and play ball.”

One month ago, on a brisk October day in Columbia, Missouri, the linebacker showed professional scouts across the country the type of game-wrecker he is. In a gut-wrenching 17-14 loss to Missouri, Orji racked up 13 tackles, 8 run stops, 4 tackles for loss, 1 forced fumble on the run, his first career interception and a strip-sack fumble that ended in a touchdown. His monster day caught the attention of Pro Football Focus, who named Orji NCAAF player of the week.

“I was out there just having fun, and I felt that the other guys felt my energy as well,” Orji said. “We just all played off each other, and I just made the available plays that came to me.”

One of Orji’s plays on that day came when Vanderbilt was trailing Missouri 17-0 with nearly eight minutes remaining in the third quarter. Missouri’s Brady Cook, facing a 3rd-and-10 on his 11-yard line, was pummeled by Orji, who worked with sophomore CJ Taylor to convert on a scoop-and-score for the Commodores. The play earned the No.1 spot on Sportscenter’s Top 10.

Whew, #Vanderbilt LB Anfernee Orji #0 laid the boom on the QB (also, impressive hurdle over the RB block by #13).

Orji is collecting impact plays on his 2022 tape. Leads the SEC in tackles. Potential top-100 draft pick in April. pic.twitter.com/Mq5h1R2zUG

After the Missouri game, Orji and the Commodores were left with a bitter taste in their mouths that they wanted to get rid of. However, Vanderbilt was unable to get back on track in the following week and ended up being bested by the Spencer Rattler-led South Carolina Gamecocks.

In that game, assistant coach Dan Jackson was on the sidelines for the Commodores, just one day after his support of Ye’s recent comments became public. National media outlets continued to bash Vanderbilt football for its lack of success on and off the football field. Vanderbilt football could not have been under more scrutiny, especially when the team lost the game, marking its 26th consecutive SEC game.

Orji, a leader of the Vanderbilt locker room, understood the significance of what a road-SEC win against a ranked opponent would mean for the direction of Vanderbilt football. Despite being 17.5-point underdogs, Vanderbilt miraculously clinched their first SEC win since 2019 (1,120 days) the following week, beating the No. 24 Kentucky Wildcats, 24-21. Orji and the defense were integral in ending the streak. The defense didn’t allow Kentucky’s Will Levis to score a touchdown and forced him to throw for only 109 yards.

“We have been grinding, we have been working, we’ve been staying toward the process that Coach Lea has been showing us,” Orji said. “It’s amazing to see that pay off.”

No matter how many questions there have been surrounding Vanderbilt football this season, Orji has continued to keep his head down and focus on the men in the locker room.

“I’m old, so the last time we won an SEC game was my freshman year,” Orji said. “I remember it like it was yesterday. This feels great—like, oh my gosh, this feels great. Right after I saw CJ [Taylor] grab the ball, tears just started coming down my face. I couldn’t help it. This feels amazing.”

The Vanderbilt veteran may be departing West End soon to cement a professional legacy, but he will always be the epitome of an ideal Commodore. Anfernee Orji is irreplaceable, but his mentality and playstyle on and off the field have made a lasting impression on the Vanderbilt community.

The Vanderbilt Hustler welcomes and encourages readers to engage with content and express opinions through the comment sections on our website and social media platforms. The Hustler reserves the right to remove comments that contain vulgarity, hate speech, personal attacks or that appear to be spam, commercial promotion or impersonation. The comment sections are moderated by our Editor-in-Chief, Rachael Perrotta, and our Social Media Director, Chloe Postlewaite. You can reach them at [email protected]u and [email protected]
All The Vanderbilt Hustler picks Reader picks Sort: Newest
Subscribe
Login
0 Comments
Inline Feedbacks
View all comments