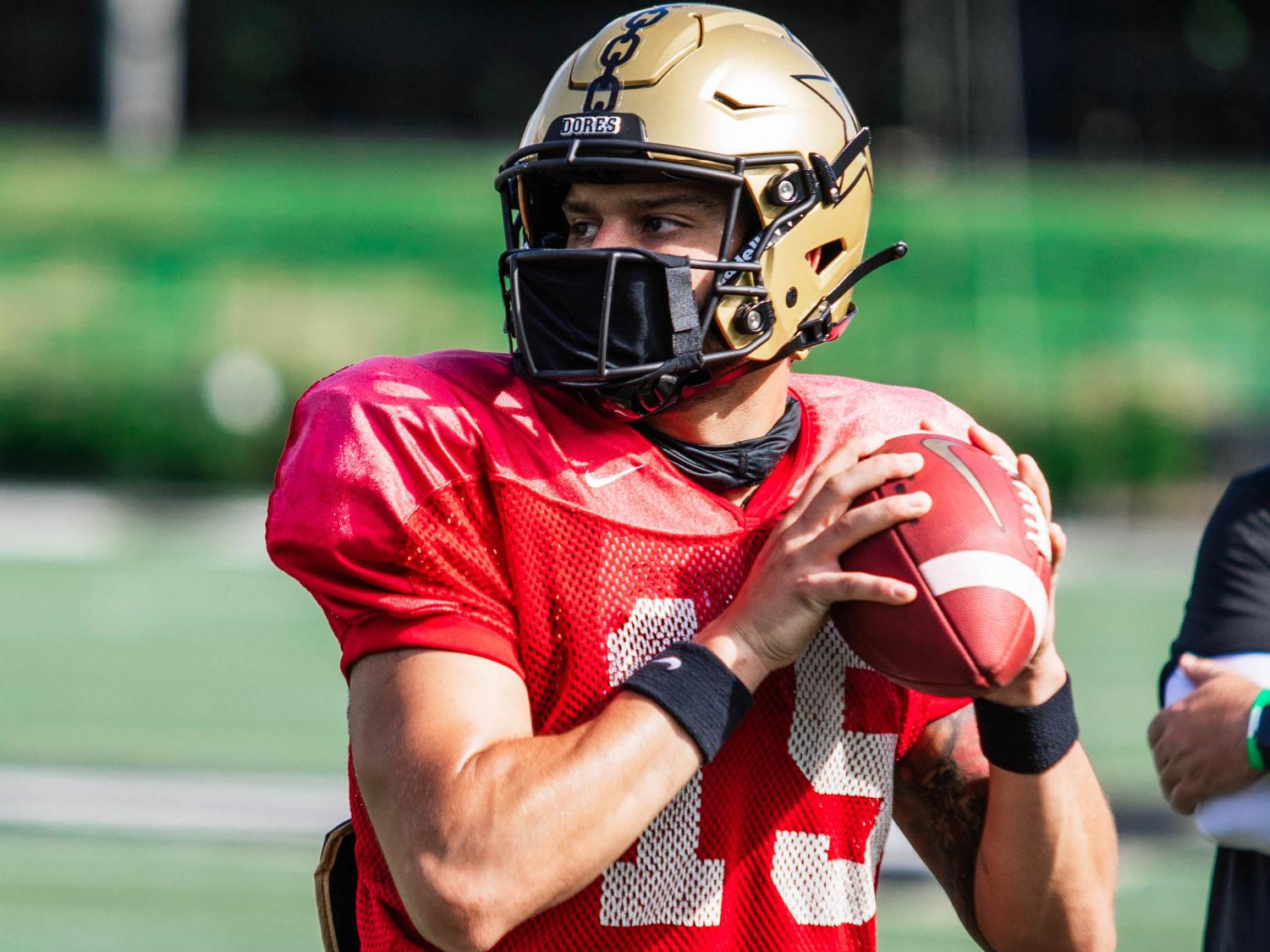 After winning two state championships in Ohio, Danny Clark seemed poised to take the SEC by storm with Kentucky. Things didn’t work out in Lexington, but following his season with junior college Copiah-Lincoln (MS), Clark returns to the SEC with a fresh perspective and ready-for-anything attitude.

Growing up in Columbus, Ohio, nearly everyone is an Ohio State Buckeyes fan. Every local child’s dream is to don the scarlet and gray and play in front of over 100,000 fans in the Horseshoe on Saturdays. And Vanderbilt quarterback Danny Clark was no different. In a move that felt like destiny, Clark, a native of Columbus, committed to Urban Meyer and the Buckeyes after just his freshman year of high school in 2013.

“Being an Ohio kid, growing up in Columbus, Ohio, which is the birthplace of the Buckeyes, growing up a Buckeye fan, I was dead set on going to Ohio State,” Clark told The Hustler.

As a three-star recruit out of Archbishop Hoban High School in Akron, Ohio, Clark’s future seemed to be set. He would soon be under the tutelage of one of the best football coaches in the country, while representing his hometown university. But as his senior year began, and his opportunity for playing time with the Buckeyes became questionable, he was forced to make his first of three significant football decisions.

“Before I make any decision, I always consult with my dad because he is my biggest fan and he has never led me astray,” Clark said. “Ultimately, I had to take the emotions out of it and think of it more as a business decision.”

Clark made the difficult decision to decommit from Ohio State and instead head to Lexington, Kentucky to play in the Southeastern Conference (SEC) for the University of Kentucky. He redshirted his first season and appeared in two games his redshirt freshman year, scoring one touchdown for the Wildcats. Then came decision number two.

Hoping to find somewhere that better fit his playstyle, Clark transferred once again, this time, to junior college. As football season began in the fall of 2019, Clark was not in Columbus or Lexington; instead, he was in the small town of Wesson, Mississippi, playing for Coach Glenn Davis and the Copiah-Lincoln Community College Wolves.

“While I was there I met a really great group of guys,” Clark said. “And I got to play for a coach who has been doing it forever. Coach Glenn Davis was my head coach there. He’s coached at Mississippi State and been in college football forever.”

Famous for knocking off East Mississippi Community College in Season One of Netflix’s junior college football documentary show, Last Chance U, Co-Lin boasts five current NFL players and is just one of many successful Mississippi JUCO football programs. For Clark, it was a humbling experience, albeit a pit stop on his way back to the SEC.

“One of the biggest things that I took away from JUCO is really that you never know what is going to happen,” Clark said. “Leaving Co-Lin and coming back to the SEC and being back at a bigtime program, I look at each day differently.”

Clark was given this second chance in the SEC in part due to his superb JUCO campaign. He played nine games for Co-Lin last season, throwing for 2,166 yards and 18 touchdowns, while capping his season with a Conference Player of the Week award thanks to his 312 yards and five touchdowns in Co-Lin’s season finale.

But the real value in Clark’s one year with Co-Lin was not the touchdowns he threw or the accolades that he accumulated. Rather, it was the perspective that came with the junior college experience.

As a sought-after high school prospect, a two-time Ohio high school football state champion, and a former SEC quarterback, Clark spent years in the bright lights of big-time American football. But once he stepped foot in Wesson, Mississippi, population 1,800, his mindset was forever changed.

“At Kentucky, coming off of winning two state championships, things had always kind of gone my way,” Clark said. “And then when I had to take a slight detour to JUCO to get where I want to be, once I made it back out to an amazing school like Vanderbilt, I looked at things differently.”

Many junior college transfers have eye-opening, cliché stories about their time playing JUCO football. You can find those in Last Chance U. For Clark, it was not some crazy story about a coach or opponent that defined his JUCO experience. Rather, it was a simple anecdote about a teammate’s sacrifice that came to his mind as he reflected on his season with Co-Lin.

After two of the Wolves’ offensive linemen went down in a big game last season, Co-Lin’s tight end, Trent Tyre, who currently plays for South Alabama, was forced to move to guard, a position far less flashy. Tyre did not catch a pass for two games, and as Clark explained, he did not utter a word about it.

“He didn’t complain one time, didn’t ask coach, ‘why am I not getting the ball,’ he did what he had to do for the team,” Clark said. “I was just really impressed and grateful that I was playing on a team with someone like that.”

This attitude, instilled in him at Co-Lin, is exactly what has helped Clark fit so well thus far with Vanderbilt amid the Commodores quarterback competition.

“That’s one thing I really appreciate about our head coach Derek Mason. All he has been preaching is its ‘big team little me,’ and that’s the attitude we have taken on during camp,” Clark said.

When it was time to make his third significant football decision, Clark had a variety of options. But one of the biggest reasons for his arrival in Nashville was the simultaneous arrival of new offensive coordinator Todd Fitch.

Fitch, the former offensive coordinator at Louisiana Tech, made a name for himself thanks to his unique and entertaining offense that featured 2019 Conference USA Offensive Player of the Year, quarterback J’Mar Smith. And even before he joined Mason’s staff in December 2019, he showed interest in Clark.

The two connected while Fitch was still at Louisiana Tech, where one of Fitch’s fellow coaches knew Clark’s JUCO head coach, Glenn Davis. As Clark continued mulling over his choices, Fitch made the move to Vanderbilt. Despite his transition to the SEC, Fitch’s interest in Clark didn’t waver, as he saw Clark’s personality as a seamless fit in his up-tempo offense.

“Danny has a presence about him. He is a vocal guy and he understands that that is part of the role,” Fitch said in Tuesday’s press conference. “He’s an older guy. He’s got maturity and a little moxie to him. He has a little personality that I think the offense needs and wants.”

Clark did his research and understood how rewarding it could be to play in Fitch’s offense. And when Fitch brought him the opportunity to return to the best football conference in the nation, the choice was rather simple.

“My decision came pretty quick because it felt so right,” Clark said. “I am getting the best schooling I can get in the entire conference and what am I getting out of football? I am getting the [former] best offensive coordinator in the Conference USA whose quarterback was Conference Player of the Year. Ok, that’s a pretty good coach to play for.”

With a fresh perspective and a healthy relationship with his new signal-caller, this summer Clark turned to building relationships with his teammates.

“I would say more than 50% of the quarterback position is knowing your guys and making sure they know you, what you are capable of and what you are willing to do for them,” Clark said. “And this summer was really big for that.” 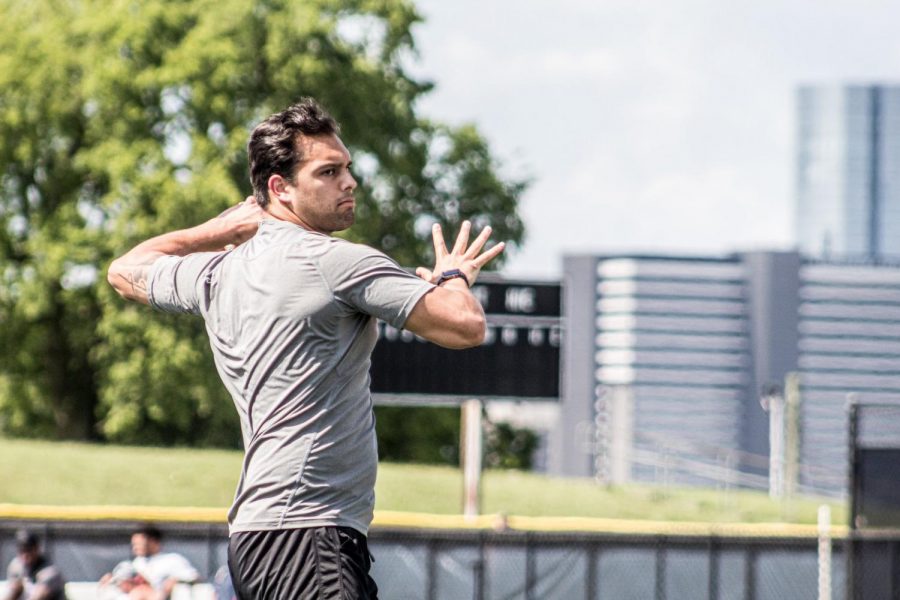 It is no secret that Clark is competing with three of his teammates for the starting quarterback position. With four brand new weapons under center, Mason and Fitch have been tasked with developing and choosing Vanderbilt’s next quarterback.

Of the four, Clark is the only one with Power Five football experience thanks to his two years at Kentucky. He has used this experience to help set expectations for younger guys, but in a quarterback room full of new Commodores, his focus has been on building camaraderie, learning the offense and bringing the best out of each one of his teammates.

“When you are taking in a new offense, the guys in the room having no animosity is one of the most important things, and I don’t think we do have animosity,” Clark explained. “We are all pretty good friends and we are really trying to bring the best out of each other in a way that doesn’t hurt the team.”

Whether he is starting game one or holding clipboards on the sidelines, each of Clark’s experiences work together to round out a quarterback who is ready for his second chance at the SEC. With a winning pedigree instilled in him by his Buckeye fandom, two years of SEC football experience and a dominant season of junior college football, Clark owns powerful perspectives that demand respect. And in a year defined by uncertainty, both in our nation and inside the Commodore quarterback room, what better time for Clark to have diverse perspectives in his back pocket.

“From the moment I step in the locker room, the moment I put my cleats on, it’s different now,” Clark said. “You don’t know where tomorrow is going to lead you, so make the most of today.”

The Vanderbilt Hustler welcomes and encourages readers to engage with content and express opinions through the comment sections on our website and social media platforms. The Hustler reserves the right to remove comments that contain vulgarity, hate speech, personal attacks or that appear to be spam, commercial promotion or impersonation. The comment sections are moderated by our Editor-in-Chief, Rachael Perrotta, and our Social Media Director, Chloe Postlewaite. You can reach them at [email protected] and [email protected]
All The Vanderbilt Hustler picks Reader picks Sort: Newest
Subscribe
Login
2 Comments
Newest
Oldest Most Voted
Inline Feedbacks
View all comments
D
Daniel Stockdale

Danny Clark is the only QB in history to have beaten the Canton McKinley Bulldogs 4 times. He did it as a freshman and sophomore at Massillon Washington and then as a junior and senior at Akron Hoban.