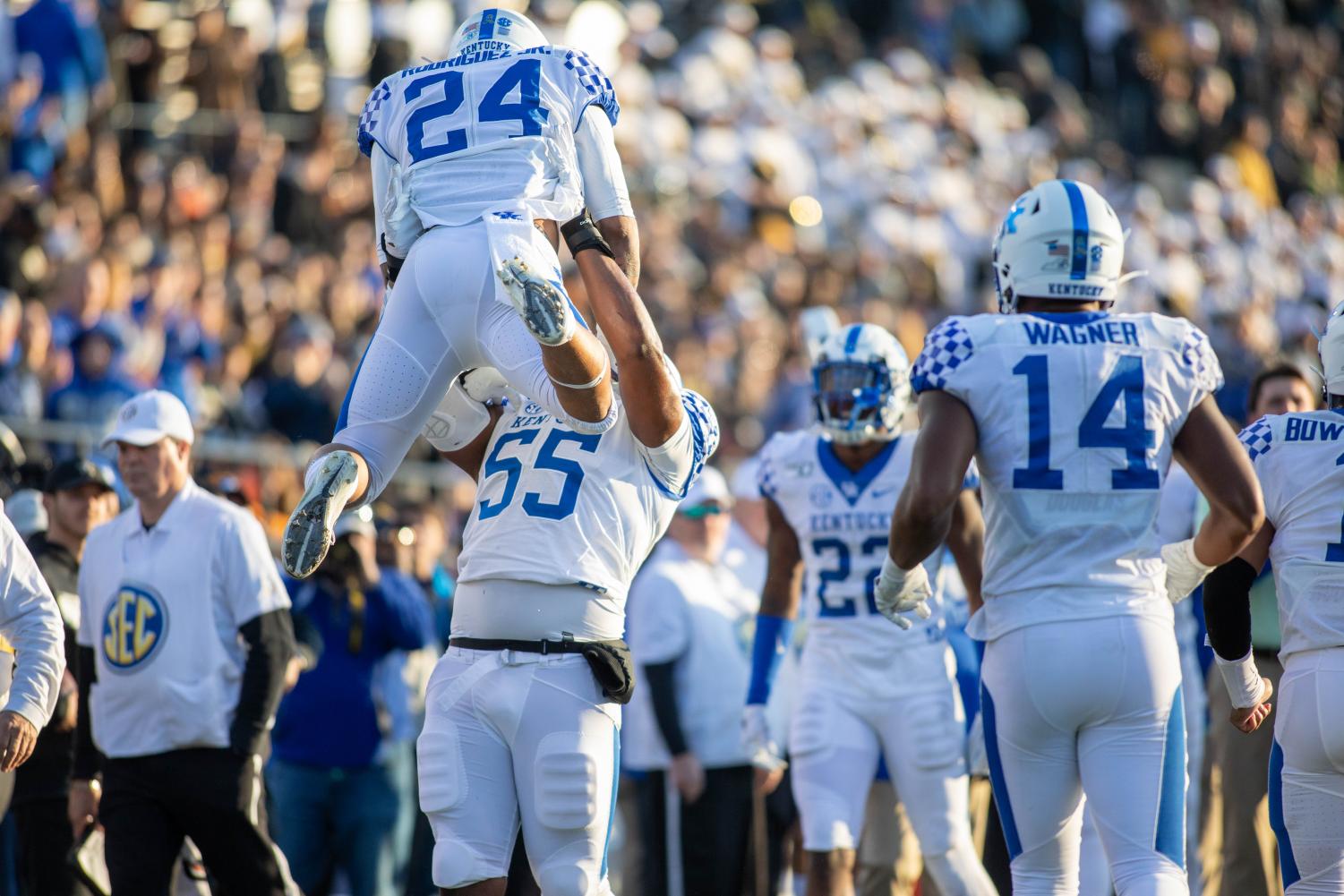 Christopher Rodriguez Jr. celebrates after scoring a touchdown, helping to lead the Wildcats to defeat the Commodores 38-14 on Saturday, November 16, 2019. (Emily Gonçalves)

Christopher Rodriguez Jr. celebrates after scoring a touchdown, helping to lead the Wildcats to defeat the Commodores 38-14 on Saturday, November 16, 2019.

This is rock bottom. This is a low like like we've never experienced before-- and we're Vanderbilt. Unsurprisingly, this week's brunch menu tastes as good as six-week-old leftovers from Rand

What is rock bottom?

Is it a 24 point loss to the UNLV Rebels, a team that proceeded to lose to Fresno State, San Diego State, Colorado State and Hawaii in succession? Somehow, someway, that’s not it.

What about that poor performance against South Carolina, during which the Commodores mustered a mere 189 yards of total offense, 126 fewer yards than Harrison Smith gained through seven punts (by the way, Smith’s 315 punting yards in Columbia is more than the Commodore offense has notched in seven of ten contests this season)? I can’t really explain why, but that’s not rock bottom either.

Then surely, it must be the performance in Gainesville. Losing 56-0 to the Florida Gators and watching quarterback Kyle Trask throw for a career-high 363 yards and three touchdowns (the best passing performance by a Gator since Tim Tebow’s college finale) had to have been rock bottom. Right?

Rock bottom is tough to define f0r the Commodores, who somehow seem to underperform incredibly low expectations time and time again. Perhaps I should pose a different question.

What is rock bottom… for Vanderbilt?

How about a 38-14 home loss to the University of Kentucky, who started Lynn Bowden Jr., a wide receiver, at quarterback? Maybe rock bottom is Bowden Jr. lighting up the Commodores to the tune of eight completions on ten attempts for 104 yards and a touchdown, coupled with 17 carries for 110 yards and another touchdown on the ground.

This is rock bottom:

Rock bottom is when the head coach attempts to pardon his team’s mediocrity in a press conference, pointing to Vanderbilt’s history of underwhelming football. That is the lowest of lows. That is complacency like we’ve never experienced before– and this is Vanderbilt.

So without further ado, here’s this week’s brunch menu. It tastes as sour as six-week-old leftovers from Rand. 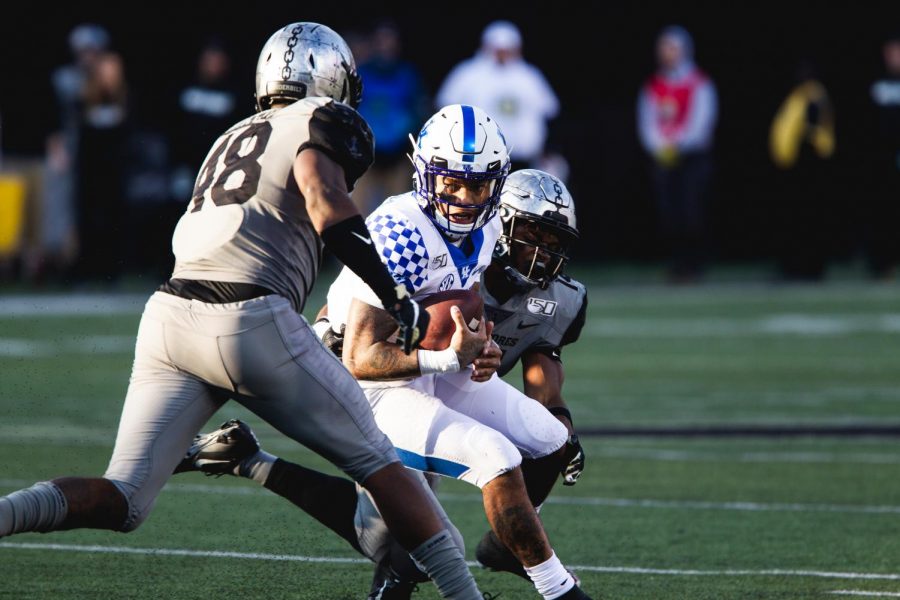 Offense is out to lunch

Johnson is a wide receiver. He threw the ball once.

Early in the game, Johnson caught the rock off a lateral and hurled a cross field pass to Ke’Shawn Vaughn. The trick play resulted in a 16 yard completion and a 96.4 QBR for Johnson.

The next best quarterback was Riley Neal, who didn’t quite post a 96.4. He completed ten of 19 passing attempts for 74 yards, no touchdowns and of course, as a right of passage, he threw an interception. This contributed to a 6.9 QBR. Need I mention Allan Walters’ one possession? Probably not, but I will. Walters was thrown into the mix on Vanderbilt’s last drive of the game. He was gifted a first down off a defensive pass interference, then threw four straight incomplete passes to wave the white flag. 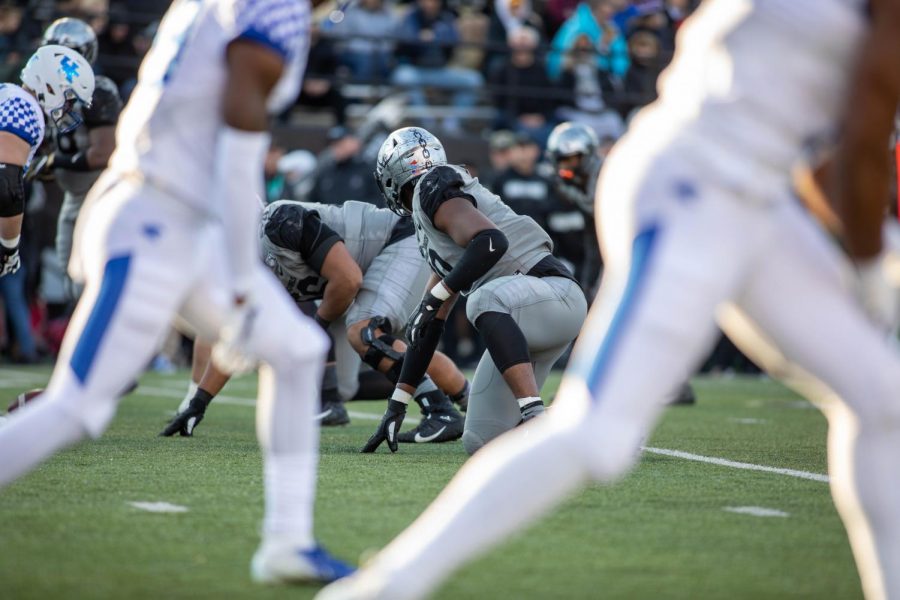 The offense was so malnourished, so inefficient and so hard to watch that Johnson wasn’t just the best quarterback. His 2 receptions for 21 yards also made him a leading receiver for the Commodores, trailing only tight end Ben Bresnahan. Bresnahan’s meager two receptions for 32 yards made him the top-dog against the Wildcats.

That’s just about all there is to say about Pinkney. I just figured it’s worth reminding our readers that he’s still on the team. After all, you may have forgotten all about Vanderbilt’s unique weapon, the star tight end who entered this season as a potential first round draft pick. He hasn’t caught a pass since Oct. 19. He has not caught more than four passes in a game all year. He has failed to eclipse 20 receiving yards in eight of ten games this season, after doing so just once last year.

It’s hard to tell exactly where to pinpoint the blame. Some may quickly point to offensive coordinator Gerry Gdowski. Others may blame Mason.

But Mason blamed their lack of a half-decent quarterback.

“Obviously quarterback is what we have to focus in on,” Mason said. “Without a quarterback in this conference, it makes it really tough to manage your offense and win games.”

Kentucky is one of the few teams in the SEC whose quarterback struggles even come close to Vanderbilt’s. Again, they started a wide receiver at quarterback. Not ideal.

But in the Wildcats’ case, it wasn’t all that bad. Bowden Jr. completed eight of ten passing attempts against a struggling Vanderbilt secondary. More importantly, he hardly had to throw the ball. I mean, why would you throw the ball, risking a turnover, when you can scramble?

Bowden Jr. channeled his inner Lamar Jackson on Saturday, as he rushed 17 times for 110 yards and a touchdown. When he got tired, he simply handed the ball to someone else. Junior running back Asim Rose only needed four carries to reach 67 yards. He wasn’t even the star of the day.

Kentucky’s freshman running back, Kavosiey Smoke, had a nice 15 carry, 95 yard and one touchdown day.

And if Smoke got tired? Along came Christopher Rodriguez Jr., another backup running back. Also a true freshman, Rodriguez Jr. looked like a seasoned veteran against Vanderbilt. He took 15 carries and turned it into 129 yards and two touchdowns.

“We just got out-physicaled,” Mason said of his team on both sides of the ball.

It’s worth noting that Andre Mintze forced a fumble in the first quarter, which Allan George proceeded to scoop and score from 67 yards out. But the defense had a bad day. They allowed 528 yards, including 401 on the ground.

They were, well, for lack of better term, out-physicaled? 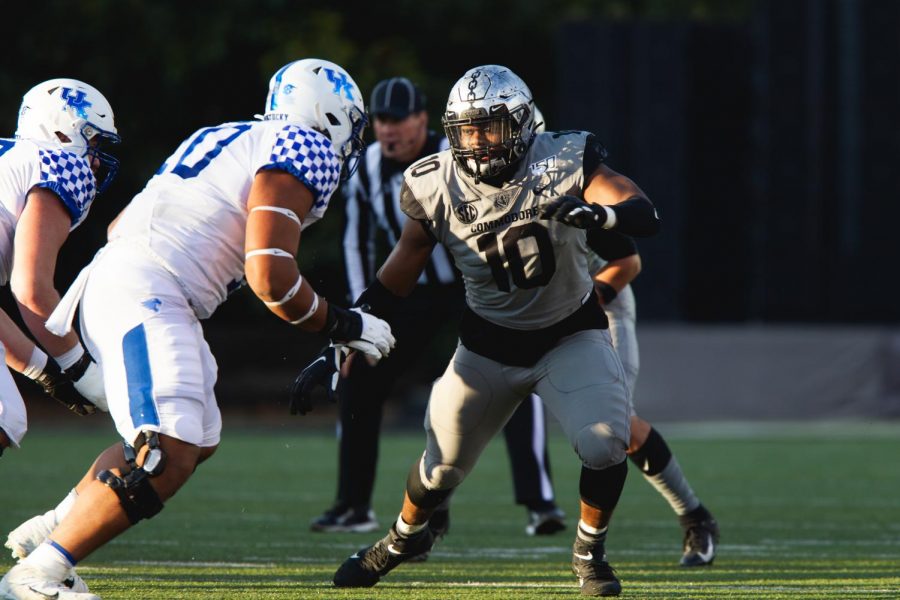 What’s next for Coach Mason?

Mason may have gotten ahead of himself in the postgame press conference. After yet another brutal loss, he proceeded to talk about next season.

“A lot of guys are coming back next year,” he said. “We’ve got playmakers here. We’ve got to make sure that with the future, we hit on some quarterbacks.”

He discussed his formula for success. He made sure everyone knew that he has a vision. But unfortunately, unsurprisingly,  Mason told the media that he has yet to have a conversation with the administration about that vision.

“I’ve sort of stayed in the moment in terms of where we’re at,” was his excuse, despite spending half of his press conference discussing the future.

Mason may not have a future in Nashville if his Commodores fail to make a complete 180. They’ve got two more chances: home against Eastern Tennessee and away against Tennessee.

It’s hard to imagine the Commodores will make major improvements in the next two weeks, given Coach Mason’s acknowledgement of their inability to do so thus far.

“I don’t think we’ve exhausted the opportunity to get better,” he admitted.

If you’re not exhausting the opportunity to get better, then what exactly have you been doing all this time?

Mason’s future looks blurry, at best. For now, we know it can’t get that much worse. After all, they are at rock bottom.

The Vanderbilt Hustler welcomes and encourages readers to engage with content and express opinions through the comment sections on our website and social media platforms. The Hustler reserves the right to remove comments that contain vulgarity, hate speech, personal attacks or that appear to be spam, commercial promotion or impersonation. The comment sections are moderated by our Editor-in-Chief, Rachael Perrotta, and our Social Media Director, Chloe Postlewaite. You can reach them at [email protected] and [email protected]
All The Vanderbilt Hustler picks Reader picks Sort: Newest
Subscribe
Login
2 Comments
Newest
Oldest Most Voted
Inline Feedbacks
View all comments
B
Bill George

What about Coach Mason’s statement in the post-game radio interview: “the problem was that we couldn’t get off the field on third down?” You don’t say . . . I mean, you know, you just have to go back to basics, I mean, you know . . .

A frank well written essay which exposes the Hustler as the only clear thinking set of fans on the campus. I had the same reaction the “waves” comment.I have been a fan for 60 years.This is the most hopeless moment of them all