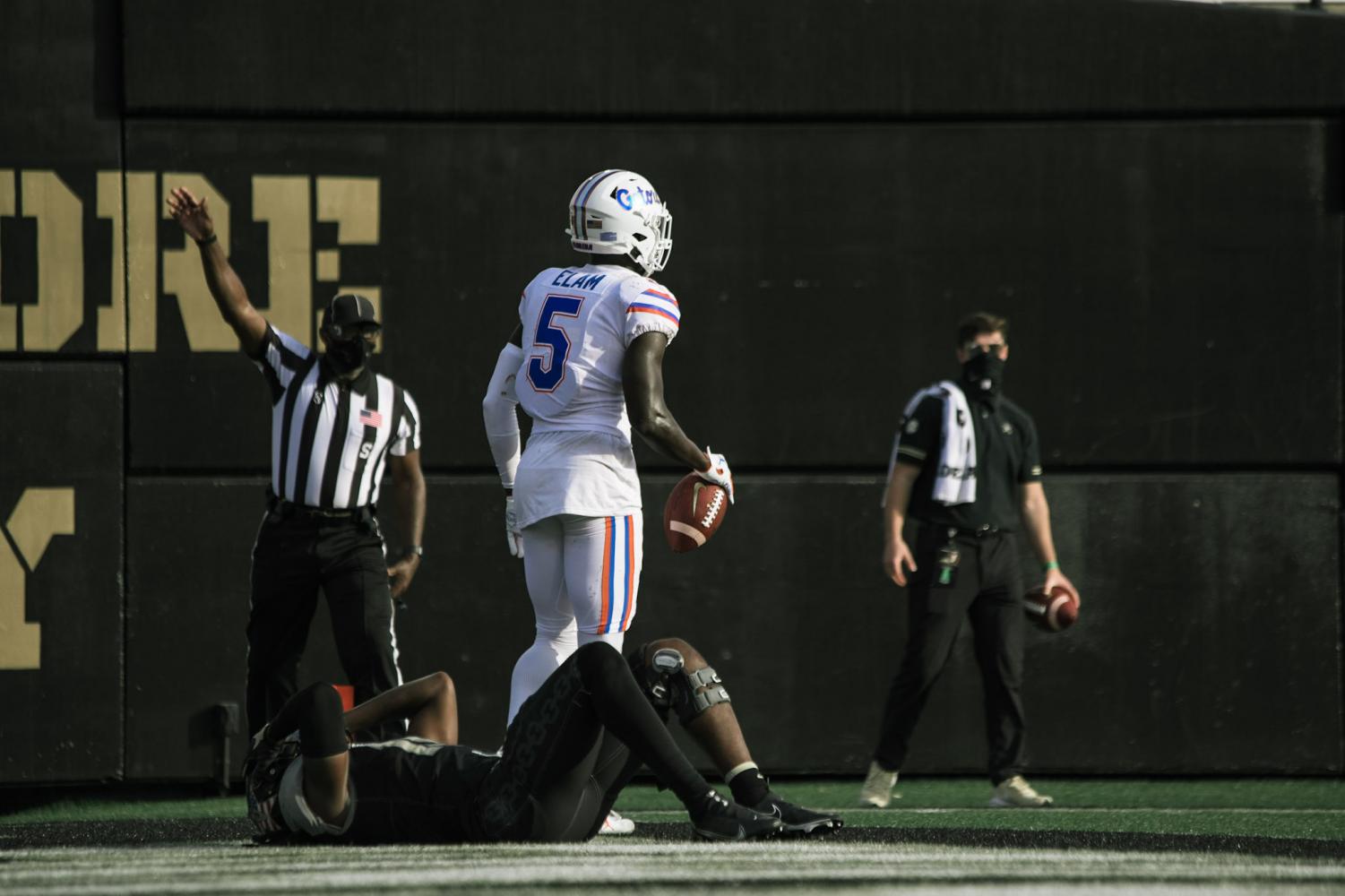 Next up? Tennessee. Two huge rivals, both programs are dumpster fires, with both head coaches sitting on a seat of molten lava. What could go wrong?

Put yourself in their shoes.

You’re a student-athlete, a football player, competing in the Southeastern Conference (SEC), the best conference in the nation. Your team, long known for its residence deep in the cellar of the standings, has not done you any favors to-date. First, there was your 17-12 loss at Texas A&M. Then, your 41-7 loss to LSU, which is not to be confused with your 41-7 loss to South Carolina the next week. And lest we forget, you had the bad, bad 54-21 loss to Ole Miss. Then a couple closer losses—losses nonetheless—to Mississippi State (24-17) and to Kentucky (38-35). You’re not fazed by your 0-6 record, though. You can’t be.

Your team is thin. Injuries, opt-outs and COVID-19 related absences plague the depth chart. It hardly seems a matter of who will or who won’t play each week. Instead, it’s a matter of whether anyone will play. Will you even reach the 53-scholarship player threshold set by the SEC? Fair question, seeing as your team has played with 58 active scholarship players twice, 56 active scholarship players once and—well, you had a game postponed for falling below 53. But alas, you simply cannot ask these questions right now.

Then, of course, there’s the speculation. The rumors. The print, online, radio and television pundits. Everyone is piling on criticism. Will Vanderbilt go 0-10? The majority of these people seem to think so. Heck, your university’s chancellor even said, without hesitation, that your program is “not where [it needs] to be,” and that you’ve had some “serious problems.” So it only seems fair to ponder: will your own head coach, the very man who recruited you to the program, who helped mold you into the person you are today, live to see another season? How about another week? It’s not your job to think about that, though. You can’t worry about that stuff; you can only think about winning.

That’s the position that the Vanderbilt Commodores found themselves in Saturday. That’s a lot of forgetting. A lot of ignoring. A lot of mental gymnastics.

Gallery|3 Photos
The Commodores huddle before they head to the locker room to dress against Florida on Nov. 22, 2020. (Hustler Multimedia/Truman McDaniel)

And I’ll be damned—they forgot it all. They put it behind them. They fought. And they improved. Just observe the development—real, tangible, quantifiable development, might I add—of these student-athletes. While the team just lost 38-17 to the sixth-ranked Florida Gators and fell to 0-7 on the season, the Commodores on Saturday played some solid football (and, at least for the first quarter, played excellent football).

But guess what? It doesn’t matter. As Vanderbilt enters rivalry week and looks at a schedule with just three remaining games (home versus Tennessee, at Georgia and at Missouri), this development, this fight, it doesn’t matter.

Because now, again, they’ll have to forget about it; try and move on.

“That’s really the goal every week,” head football coach Derek Mason said after Saturday’s loss. “Shift, refocus and go to the next game.”

As the columnist, it’s an exhausting cycle. And I can only imagine, by putting myself in their shoes, how exhausting it is for the players.

“When you look at this ballgame,” Mason said, “This ballgame came down to what we didn’t do.”

Welp, here’s to doing it next week!

Week after week, game after game, loss after loss, there remains one constant positive (for the most part, at least. I’ll just exclude the turnover-ridden game against Mississippi State. I feel like that’s an alright compromise, since he’s just a true freshman. Fair enough?): Ken Seals balled on Saturday.

Vanderbilt took an early 7-0 lead thanks to what might have been the most well-orchestrated possession I’ve seen in my almost four years of covering this team. (11 plays, milking over four minutes off the clock, traveling 75 yards downfield only for Seals to find wide receiver Chris Pierce for a touchdown. A pretty normal sequence by most programs’ standards, but you must understand: that has never been and will never be a given with Vanderbilt’s offense.) Then when Florida responded with a touchdown of their own, Vanderbilt drove down the field and actually nailed a field goal, something they have now done only two times on six attempts this season.

Back to the point: that was, in large part, because of Seals. He orchestrated a couple of gorgeous drives. On the first touchdown drive, he completed all five of his pass attempts for 61 yards and a touchdown, all while spreading the love. The five targets were to four different receivers in Pierce, Ben Bresnahan, Cam Johnson and Amir Abdur-Rahman.

Notice how I haven’t mentioned who he was going up against. Because at this point in the game, I had almost forgotten.

He was outplaying—at least, to this point—Florida quarterback Kyle Trask, who entered the contest a legitimate Heisman Trophy favorite. And while Trask heads back to Gainesville still a Heisman favorite due to the Commodores’ inability to shut him down for more than a quarter, Seals—a true freshman, who is a computer science major, who quarterbacks the Vanderbilt Commodores—was going toe-to-toe with him.

Yes, I just used the H-word in the same sentence as a Vanderbilt player. Not because I think he’ll win one, but because he outplayed Trask for an incredible amount of time.

Seals finished with 319 yards, completing 22 of his 34 attempts, along with two touchdowns and an interception. Once again, he played really well. It’s taken him just seven games to etch his name into the Vanderbilt record books, as no freshman quarterback in program history has thrown for as many yards as Seals.

So, what happened? After the hot start, how did Vanderbilt fail to pull off an historic upset for the umpteenth time?

“There were enough plays out here in this ballgame to be made on our part.”

I, for one, have yet to see a football game that did not have enough plays for someone to win.

“A couple of missed interceptions or interception opportunities,” he continued. “A couple of drives that got stalled because of us, not really anything Florida does to us.”

From my recollection, there were not 21 points worth of interceptions. Not close to it. Cornerback Allan George dropped one, but a huge stop in the backfield from linebacker Andre Mintze contained Florida to a field goal on that early second half drive.

“We still have some depth deficiencies on the defensive side of the ball,” he said. “But we’re working hard on the back end to keep us functionally going.”

Oh boy, are they deficient. That much is true. Mason’s defense is falling to pieces. Donovan Kaufman, an excellent freshman defensive back, is out for the season with a “medical-related” issue. Tough break, but nothing you can do to avoid that one. The same goes for Randall Haynie, a starting cornerback who didn’t play because, well, we don’t know. He was on the sidelines Saturday but wasn’t wearing pads. Could be an injury.

“I thought [Trask] struggled a little more in the first half just having clean looks,” Mason said. “We had one or two opportunities to make some plays, and then he threw a couple of rainbow balls that I truly believe should’ve been picked. I just thought those plays were missed opportunity plays for us.”

More than once, Mason cited missed interceptions. He also alluded to Trask’s struggles disappearing in the second half.

Have we ever considered how difficult it might be to reel in an interception, to play four quarters of mistake-free football, to stop a Heisman Trophy candidate from running up the score, when you have four healthy scholarship cornerbacks?

There’s Allan George, Elijah Hamilton, Jaylen Mahoney and Gabe Jeudy-Lally. Also listed as a cornerback the past few weeks was Maxwell Worship, but Worship is a safety by trade. They’re so depleted that it’s not uncommon for people to switch positions (see: Drew Birchmeier). They’re so depleted that Camden Coleman is actually on the depth chart, albeit as a backup safety, despite never in his life playing a snap of organized football prior to his arrival on campus.

How sweet it would be

Not like it needs to be said again, but Vanderbilt is still in search of its first victory of 2020. It doesn’t look like they’re going to win one.

This coming week, they’ve got a shot. A fleeting shot, but a shot nonetheless. And how great would it be if it came at the expense of the Tennessee Volunteers?

“We’re gonna put the best team out there that we can,” Mason said, when asked if he thinks Vanderbilt’s player availability might determine the outcome. “I think you bring up a good question and a good point in terms of trying to match talent for talent. But right now I’ve got an advance scout on Tennessee but I haven’t really dove into where they’re at. I just try to keep my mind here.”

This is certainly the worst Tennessee team in recent history. It might even be the worst team in program history. After two wins over South Carolina and Missouri to start the season, the Vols have skidded, losing five straight in embarrassing fashion. Not seven straight, but five straight. Nevertheless, their most recent loss to Auburn featured some questionable football. Some egregious quarterbacking, too.

At one point, the Volunteers had back-to-back redzone possessions end in negative seven points. Seriously. One was a 100-plus yard pick-six.

This should be a really, really interesting game. And a really, really ugly game. Two huge rivals, both programs are dumpster fires, with both head coaches sitting on a seat of molten lava.

What could go wrong?

The Vanderbilt Hustler welcomes and encourages readers to engage with content and express opinions through the comment sections on our website and social media platforms. The Hustler reserves the right to remove comments that contain vulgarity, hate speech, personal attacks or that appear to be spam, commercial promotion or impersonation. The comment sections are moderated by our Editor-in-Chief, Rachael Perrotta, and our Social Media Director, Chloe Postlewaite. You can reach them at [email protected] and [email protected]
All The Vanderbilt Hustler picks Reader picks Sort: Newest
Subscribe
Login
1 Comment
Newest
Oldest Most Voted
Inline Feedbacks
View all comments
C
Chuck Offenburger VU '69

I’m nominating Simon Gibbs as All-SEC in sports writing, nay, as All-American in sports writing. (Is there a Heisman Trophy for best college sportswriter?) This “Commodore Brunch” story by Gibbs is just great. It conveys all the suffering our poor football players and coaches are going through, but it also shines a light on some real bright spots. It recognizes improvement, and it acknowledges the seeming futility. And then he gives us the best tidbit of this whole college football season — that we’ve got a player on the Vanderbilt roster who never played organized football before he reported out for our team! You go, Camden Coleman! You’re going to have the whole nation cheering for you, if ever you get in a game. Gibbs is so good that he is making me like Vanderbilt football again. And if we somehow can knockoff UT next Saturday, I’ll be back in love with Vanderbilt football.