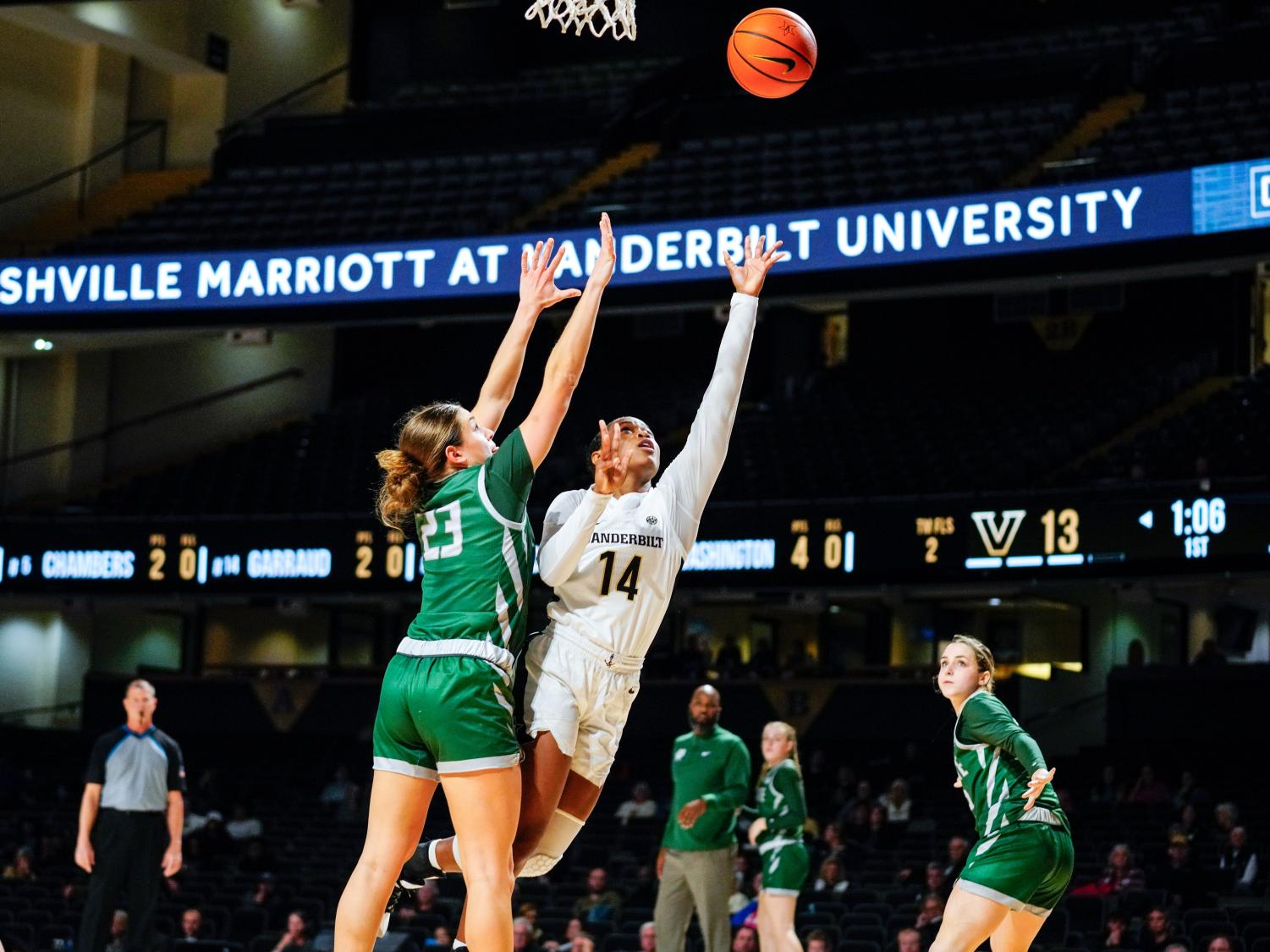 Vanderbilt Women’s Basketball has now dropped five of its last six games. This setback gives the program a chance to define itself both this season and moving forward.

I could fill up an entire paragraph with “evens” and obstacles that have hit Shea Ralph’s program. The injury bug hasn’t been kind to the young head coach, and it seems to get worse at every turn. Perhaps it’s due to the overwhelming number of games that the women’s squad has played to start the year, or perhaps it’s simply bad luck. Either way, losing a third of your entire roster—four starters at that—makes it hard to win games and tests the willpower of any team. Truly, it has tested this year’s Commodores and Ralph let the media know it after a tough 66-54 loss at home against UT Martin.

“The thing for me that’s more concerning [than the basketball on the court] is our lack of ability to execute or fight through adversity. Sometimes a lack of competitiveness, it seems,” Ralph said. “For me as a coach, those are the things I’m figuring out.”

Ouch. However, after committing 24 turnovers en route to a loss against a then-2-5 UT Martin squad, it’s the attitude that this team and this program needs to have: unsatisfied and frustrated. Ralph has been a winner her whole career—both as a player and coach, and you can be sure she’ll call out a negative attitude when she sees one because she knows how divisive it can be. And, though we can make some valid excuses as to why this team is underperforming, Ralph doesn’t want to hear it.

“Those [injuries] are things that are out of our control. I don’t like to use those as any kind of reason for why we’re successful or not. We just have to be better,” Ralph said.

Where is the offense?

In every sport, offense and defense play a cat-and-mouse game where the defense reacts to whatever the offense brings forth. Once an offense finds a tactic that works, the defense adjusts and reacts to it, and the offense must find something new. However, as the defense tries to catch up, the offense can shift back to their original formula, adding confusion and unpredictability to the situation. This back-and-forth shifting can’t occur if the offense has no success to work off of in the first place. For Vanderbilt, all this means is that the team needs to find a consistent way to put the ball in the basket, at which point the defense must react and allow other parts of Ralph’s offense to open up.

The catalyst could be getting Sacha Washington and Amauri Williams—the Commodores’ two tallest players—on the court together and creating size mismatches. After all, Williams was the tallest player on either team for both the ETSU and UT Martin games. Or, it could be hoisting up 3s like there’s no tomorrow, as the group is shooting an impressive 35.1% from beyond the arc, good for 60th among 350 eligible DI women’s basketball programs. Either way, right now it seems as if there’s no base to work from, nothing from which to improvise.

It’s hard to fool a defense when they don’t fear any given aspect of your attack.

This mantra relates to Vanderbilt’s offensive drought struggles. Evidenced by the six and a half minute scoring drought at the end of the first quarter of the UT Martin game, the Commodores can go ice cold at times. And, sure, basketball is a game of streaks, but this problem happened consistently with this program last year, and it’s bleeding into this year. At a certain point, someone has to drive to the rim and take a hard foul to get a couple of chances at the charity stripe (at which the team is shooting a solid 71.2%). Young players are still learning these kinds of lessons and tactics, but it goes to show that, when things aren’t quite clicking offensively, there’s no default strategy to fall back on.

Even with Ciaja Harbison—Vanderbilt’s leading scorer—returning soon, the lack of offensive identity is not going to suddenly dissipate. There needs to be more intention and creativity in the lineups and tactics moving forward to find the best combination of athletes to put on the court together.

As Ralph mentioned earlier, the team has to get its attitude and mentality in check before it can worry about the actual game of basketball, but this shift better happen quickly, or we’ll see another 31-point performance sooner rather than later.

One of the most critical pieces of basketball is allowing yourself or your teammates to get off a shot, whether or not it’s a good one. This shot could lead to a basket or an offensive rebound, but either way, you gave yourself a chance to score. Turnovers not only erase any opportunity to put points on the board (you miss 100% of the shots you don’t take…), but they also make it easier for the other team to cash in on the other end. Just like turnovers, second-chance opportunities off offensive rebounds give teams an extra possession where they’re already in an advantageous position to score—it’s essentially a turnover that occurred before the defending team could even regain possession.

The importance of these extra-opportunity chances is highlighted by Vanderbilt’s last three tilts. In each game, the same team won both the turnover and second-chance points battle, and that squad won the matchup as well. This pattern is why Vanderbilt had trouble beating UT Martin—the Commodores had 19 (19!) first-half turnovers which led to 28 points off turnovers. The visitors got 42% of their points from Commodore turnovers alone. It’s nearly impossible to win a game like that.

Even when the Commodores are not turning the ball over, they’re still only averaging 35 rebounds per game compared to opponents’ 36.4. This statistic is a problematic contributor to the second-chance opportunity issue. Something has to change in this category before the team’s SEC slate starts and the Commodores face some of the best talent the nation has to offer. Whatever Ralph’s solution might be—such as using bigger lineups or practicing boxing out more, I just want to see the team clean up basic parts of the game like grabbing a defensive rebound or not throwing the ball to the other team.

One can only hope that as the season progresses, players will start to become more familiar with each other and Ralph will learn which lineups complement each other the best. Hopefully, this evolution will help cut out some bad turnovers and improve overall defensive cohesiveness.

Until then, each player must take it upon themselves to give 10% more effort when rebounding and 20% more mental focus to keep the ball on offense. Maybe then this team’s offensive identity might emerge.

“Our team has been through it. Our team is going through it,” Ralph said. “[The team] knows that I talk about this a lot—you can’t skip any steps on the path to becoming something really great.”

Ralph understands that this team is not ready to compete at the highest level of college basketball quite yet. But, she still wants to cement a winning culture and an attitude in the building that screams championship pedigree. You form that kind of atmosphere by being obsessed with improving, relentlessly forgetting your own excuses and keeping faith in the process even when things go wrong.

So, was I surprised to hear Ralph’s criticism of her squad at the UT Martin press conference? No. It matches her character and reflects the change she wants to see in this program. I would have been disappointed if she blamed these results on injuries or pretended as if the team has been playing well as of late. Still, criticism is tough to hear from your coach, no matter the situation.

Now, we must wait and see how the team responds. Ultimately, any bounce back—or lack thereof—will define this year’s Vanderbilt squad and will set the groundwork for future perseverance in the face of adversity under Ralph. After all, you are defined by your actions in the tough times, not the easy ones.

With Harbison slated to return to the Commodores’ starting five for the team’s matchup with LA Tech on Dec. 8 at 6 p.m. CST, expectations will be back to normal. A statement game with few turnovers and high energy is what I expect from this team before it has its exam break and takes 10 days off before returning against Lipscomb at home on Dec. 18.