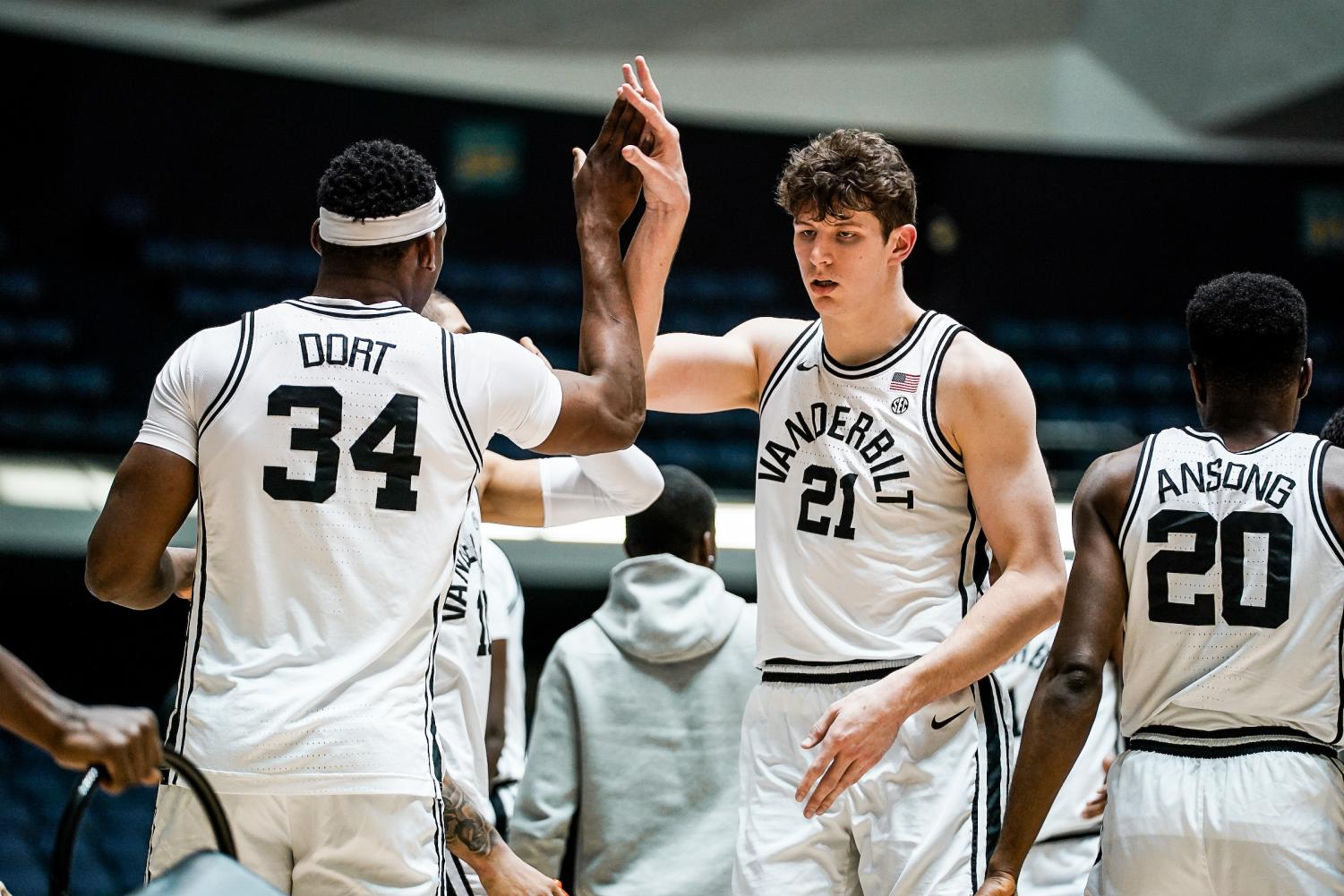 The Commodores were unable to capture their first winning record of the season on Wednesday, thanks to a lack of composure from Jerry Stackhouse.

With just one month remaining until their conference schedule begins, the Vanderbilt Commodores need to use December to improve in two categories: basic fundamentals and composure.

Nothing embodies fundamentals more than making free throws, and the Commodores have not been too successful in doing so. Vanderbilt has been nothing short of putrid from the charity swipe with a free throw percentage of 62.2%. This statistic is good for 336th in the nation, according to KenPom.

It’s been 10 days since the last men’s Memorial Minutes was released, and although the Commodores remain under .500, Jerry Stackhouse’s offense seems to have opened up. After going 1-1 on its Thanksgiving trip to California, Vanderbilt showed grit in its 70-65 loss to the VCU Rams on Wednesday night.

Myles Stute has been key in Stackhouse’s offense gelling so smoothly the past three games. The junior has been a complete weapon beyond the arc in the past three games, making 59% of his 3-point attempts. Against VCU, he scored a noteworthy 18 points from the 3-point line.

Jordan Wright, on the other hand, was unable to contribute much against VCU. He played only 14 minutes due to exiting the game early with a back injury.

“His back was bothering him tonight. He wasn’t himself,” Stackhouse said. “Hopefully we can get healthy, get well and get prepared for a very good Wofford team coming here this weekend.”

Now, it’s time to address the elephant in the room: the Stackhouse ejection.

With nearly eight minutes remaining in Vanderbilt’s battle with VCU, Commodore center Liam Robbins took advantage of a great pass from Quentin Millora-Brown and dunked over Toibu Lewal to put the game at 54-51. Right away, Robbins celebrated and performed the “on his head” celebration by putting his hand on top of his head. The innocuous gesture was deemed insensitive by one referee, and Robbins quickly received a technical foul.

“I’ve done that [the celebration] plenty of times before in my career,” Robbins said. “I’ve never been called for it, but I got to be smarter, especially with such a close game…it was a momentum changer, so I just need to be better.”

This was what had Jerry Stackhouse steamed up and eventually led to his double technical and ejection. Liam Robbins dunked, did the "on his head" celly and then earned a T. Seems like . . . Stack had every reason to be upset? This was pretty soft. pic.twitter.com/buGz5rwXPc

Stackhouse was furious with the call and went right to the referees. His temper quickly rose, and he was ejected in a matter of seconds due to cursing out one of the referees. His ejection led to a double technical foul, which hurt the Commodores even more. Although VCU went 4-6 on the free throws from the three technical fouls, Stackhouse’s ejection contributed to Vanderbilt’s loss.

Even though the technical foul call on Robbins’ celebration was extreme, Stackhouse should not have shot his team in the foot by yelling expletives at the officials. If Stackhouse maintained more situational awareness, he would not have risked an ejection at such a crucial moment in the game. Some of the largest national media outlets have featured Vanderbilt basketball in the last 48 hours but only to show Stackhouse chewing out the referees.

The last eight minutes of the VCU game proved that Vanderbilt is resilient. After Stackhouse was ejected, assistant coach Adam Mazarei filled in. The Rams led by seven points, but the Commodores did not back down. The game came down to the final seconds, but Jamir Watkins converted on a contested jumper to put the game at 70-65 as the shot clock hit double zeros with 16 seconds remaining. The Commodores fight until the very end, no matter who is calling the plays.

“I got to have more poise and more control in that situation, but I was sick of that foolishness tonight,” Stackhouse said. “Maybe if I was there, maybe it could have been a little bit of a different story at the end of the game. But again, we had an opportunity to get it back.”

Liam Robbins, a seven-foot center, is a force in Vanderbilt’s frontcourt. Robbins, who is in his second season at Vanderbilt, previously played at Drake University and the University of Minnesota. At Minnesota, Robbins averaged 24.7 minutes per game, 2.7 blocks per game and 11.7 points per game. The Iowa native was set to have a massive role in the Vanderbilt offense in the 2021-22 season, but he missed the first 21 games of the season because of a foot injury. Robbins played in the final 15 games of the season and averaged 6.8 points and 2 blocks per game. The first seven games of this season have proved that a healthy Robbins is a force to be reckoned with. The center averages 2.3 blocks per game, which is the fourth most in the SEC.

Let’s flashback two weeks to the beginning of Robbins’s emergence.

Following a lopsided win over Morehead State where Robbins scored nine points and had four blocks, the Commodores traveled to Anaheim, California, to compete in the Paycom Wooden Legacy Tournament. In Vanderbilt’s first game of the tournament, California-based St. Mary’s bested the Commodores by 10 points. That night, Robbins racked up 13 points and shot 6-8 from the field.

The next day against Fresno State, Robbins played like a possessed man. In Vanderbilt’s 67-59 victory over the Bulldogs, Robbins scored 20 points and grabbed 7 rebounds. The fifth-year senior also notched a career-high 8 blocks, which tied a tournament record. Robbins’s enormous day helped the Commodores capture third place in the tournament.

“My whole career, I’ve been a shot-blocker,” Robbins told the media on Nov. 29. “I’ve been relied on to be the last line of defense when people come to the rim. That is something here that I’ve carried over from where I’ve been previously.

Just one week later, Robbins proved that his game against Fresno State was not a fluke and scored 14 points in Vanderbilt’s 5-point loss, despite being tormented by the VCU defense on several occasions without any help from the referees.

Back on West End

Vanderbilt has not played a game at home in two weeks. But, the Commodores do not need to worry about being homesick for the rest of the nonconference slate. Of Vanderbilt’s next six games, five are home and one will be played at a neutral site. Sitting at just 3-4 is less than ideal for the Commodores, but there is so much basketball left to be played. The Commodores next play Wofford, Pittsburgh and Grambling State, all at home.

If Jordan Wright is healthy, Myles Stute continues to cash in from beyond the arc and Liam Robbins continues to be a force in the paint, the Commodores can muster up a three-game winning streak before they meet NC State on Dec. 17 in Chicago. According to KenPom, Vanderbilt has a 46% chance of winning their next three games, but can Stackhouse’s offense find its rhythm back at Memorial?

In Vanderbilt’s five games against Wofford, the Commodores are undefeated. Tomorrow, Stackhouse’s team will look to continue that streak.

The Vanderbilt Hustler welcomes and encourages readers to engage with content and express opinions through the comment sections on our website and social media platforms. The Hustler reserves the right to remove comments that contain vulgarity, hate speech, personal attacks or that appear to be spam, commercial promotion or impersonation. The comment sections are moderated by our Editor-in-Chief, Rachael Perrotta, and our Social Media Director, Chloe Postlewaite. You can reach them at [email protected] and [email protected]
All The Vanderbilt Hustler picks Reader picks Sort: Newest
Subscribe
Login
1 Comment
Newest
Oldest Most Voted
Inline Feedbacks
View all comments
J
Jerry Reves, MD

With all due respect, Stackhouse should not be the victim here. The referee, Lenox, from Kentucky and beneficiary of multiple UK rembursements, and his felliw SEC refs were 30 minutes into a game in which their performance repeatedly favored the home team. (Look at abnormally high disparity in fouls called between teams.) The technical foul called on Robbins was inexcusably bad. Stackhouse should not take this kind of incompetent officiating. He has to support his team and our university. The coach reacted to an incredibly poorly officiated game by SEC officials. I have watched these substandard SEC officials since a freshman in 1961. A way to get their attention and that of the sportsworld is do exactly what Ciach Stackhouse did. Hopefully the SEC will prevent its officials from “disrespecting” the game by hiring referees with conflicts of interest, poor judgement and incompetence.
Jerry Reves, MD ’65