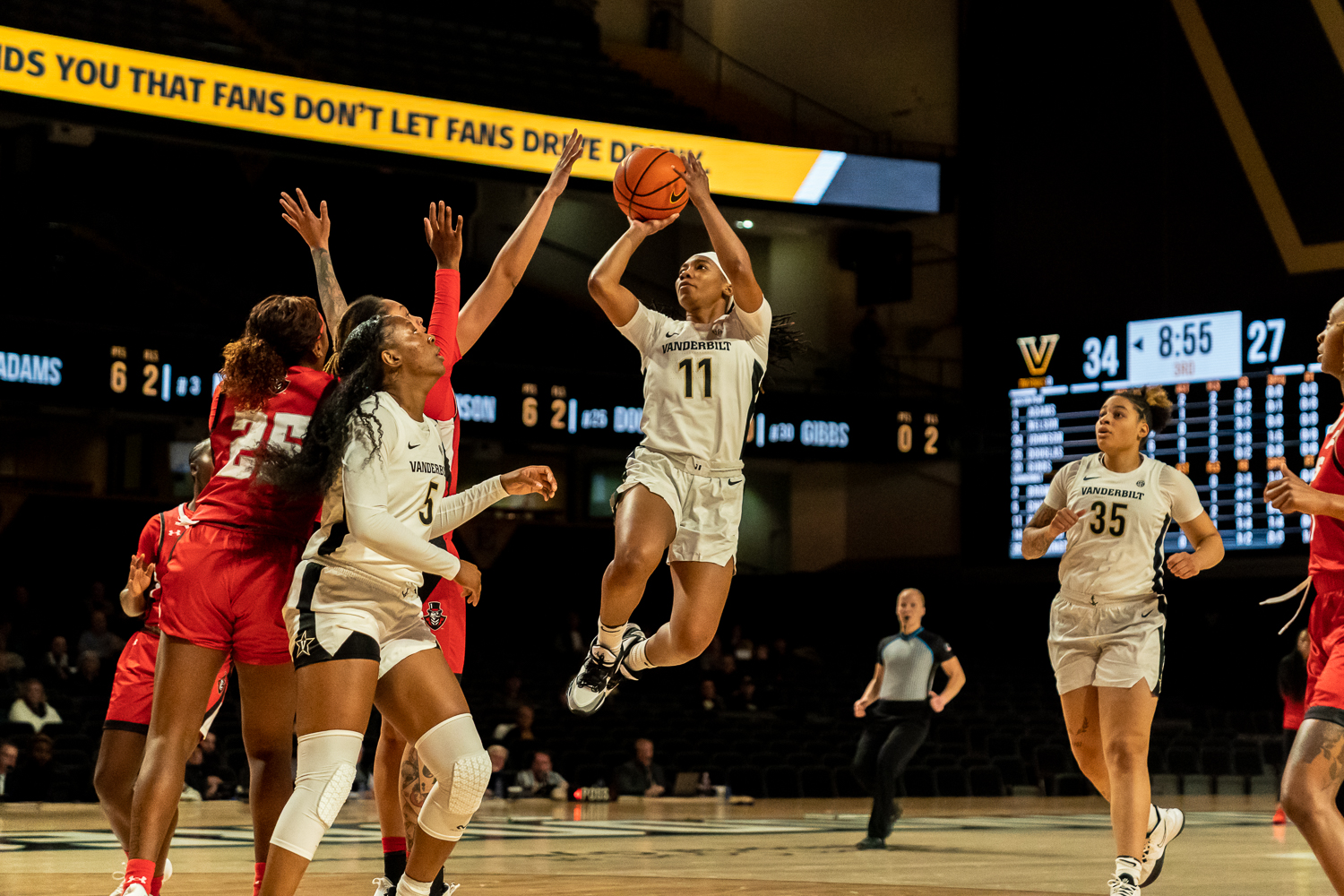 Memorial Minutes: Back down to Earth

The Commodores have dropped three straight after a scorching start to the season. Could a youth infusion turn the tide?

Simply put, the first five games of the season could not have gone much better for Vanderbilt women’s basketball.

In the absence of her three leading scorers from a year ago, head coach Shea Ralph looked to a combination of transfers and incoming freshmen to fill the void. Through the season’s opening quintet, it appeared that Vanderbilt’s incoming class of contributors would help Ralph manage the transition seamlessly. The Commodores came out of the gates hot, beginning the season 5-0 for the first time since the 2014-15 season and were led by a dominant backcourt of transfer guards Ciaja Harbison (St. Louis) and Marnelle Garraud (Boston College).

Despite both players starting anew at Vanderbilt after full collegiate careers elsewhere, Harbison and Garraud were able to immediately find a rhythm playing under Ralph. Through five games, Harbison (18.0 points per game) and Garraud (12.4 PPG) paced Vanderbilt in scoring and were both able to quickly adjust to Ralph’s high-pressure defensive system. Combined with strong contributions from returners Sacha Washington and Yaubryon Chambers, the Commodores were outscoring opponents by 19.4 points per game and looked dominant.

“The transition’s been awesome. I’m enjoying playing with this team and this staff,” Garraud said after Vanderbilt’s 70-61 win over Austin Peay. “We’re all we got, and we’re all we need, so everytime we get out on the court, we’re fighting for each other.”

Despite the promising start, the past two weeks have not been as kind to the Commodores. After dropping its first game of the season in a 67-59 loss to Saint Joseph’s, Vanderbilt headed to Cancún, Mexico, to compete in the Women’s Cancún Challenge. The change of scenery did not change the team’s rhythm, however, as Vanderbilt fell to No. 13 NC State in its first game, 82-73, and then to the University of Northern Iowa in its second game, 65-62.

After impressive early performances, it seems that Ralph and Co. need to re-calibrate as the season heads toward its midway point. With that, let’s take a look at what the Commodores need to focus on to get back to winning ways.

Searching for a Robin

To be clear, Harbison has been every bit as good as advertised. After a successful career at St. Louis, in which she averaged over 14 PPG in each of her four seasons, the transfer guard has elevated her game under the watch of Ralph, averaging 18.5 points and 5.5 assists per game as the true orchestrator of the Commodores’ offense thus far.

Most points scored by a Commodore since Christina Foggie against Georgia on Jan. 26, 2012. #AnchorDown | @Ciaja2__ pic.twitter.com/PvgTQmONT1

What may be even more impressive about Harbison’s insertion into the fold is how she has altered her playstyle as a Commodore. Despite coming into Ralph’s offense as an extremely ball-dominant player, Harbison has been willing to adjust her expectations, relinquishing some of her on-ball duties in favor of playing a key role in Ralph’s movement-oriented system. As a result, the graduate transfer has been able to significantly improve as an off-ball scorer at Vanderbilt. The evidence of this feat lies in Harbison’s proficient shooting from deep, where she is converting at the second highest rate of her career (35.3%) despite increased volume.

While Harbison is firmly entrenched as Vanderbilt’s offensive leader, finding consistent offensive contributions behind her has been an issue in recent weeks. Despite Garruad’s impressive start to the season, she struggled to find consistency in all three of Vanderbilt’s losses, shooting a combined 27% (10-36) from the field and 19% (4-21) from three-point range. Not great. Yet, Garraud’s lengthy collegiate record tells us that the former Boston College guard will rebound to the offensive form that made her one of Ralph’s top targets in the transfer portal.

Given Garraud’s struggles, Vanderbilt’s need for a consistent scoring option behind Harbison has become apparent. In all three of the team’s losses, Harbison was the only player to eclipse 11 points in any game for the Commodores. This weakness became most apparent in the team’s loss to NC State, when Vanderbilt fell despite a 34-point outburst from Harbison. As has been the case all season, it does not appear that a second Commodore is currently able to match the level of output that Harbison has been able to produce. But Ralph may be able to find an offensive boost by simply looking to an emerging star on her bench: Ryanne Allen.

As a freshman, Allen has already begun to show the traits of a truly high-quality college player. Coming in as a top-100 recruit out of high school, Allen has a combination of size and shooting ability that has made her stand out as a mismatch to opposing defenses all season. Despite playing the seventh-most minutes on the team (18.7), Allen ranks fourth on the Commodores in scoring (7.8 PPG) and has been the team’s third best shooter from behind the three-point line (32.4%). Allen has also shown her ability to be a main offensive focal point, already having four games scoring more than 10 points in the young season. With the ability to score on the interior as well as the perimeter, Allen’s diverse offensive skill set is unique to Ralph’s squad.

That's another 3⃣ from @RyRyBuckets, her 🔟th of the season. pic.twitter.com/okU6DnhZGM

With limited opportunities thus far, Allen has shown her capabilities as a spark plug off the bench. Seeing as the Commodores are struggling for consistent scoring options behind Harbison, it’s only a matter of time before Allen gets an opportunity to cement herself in Vanderbilt’s starting lineup. As Harbison continues to show out and Garraud regains her form, Allen’s emergence has the potential to make Vanderbilt one of the most potent scoring offenses in the SEC.

In search of an anchor

Since her introduction as head coach in 2021, Ralph has been very straightforward with the style of basketball that she wants her teams to play. For the second-year coach, it all starts with defensive intensity.

Through the season’s first five games, the Commodores were a true embodiment of an elite defensive team. Spearheaded by an aggressive full-court press, Vanderbilt forced opponents into 19.8 turnovers per game through its first five games. The efforts were led by Garraud, who averaged 2.1 steals per game last year en route to All-ACC Defensive Team honors. The Commodores’ athleticism and switchability on defense were able to overwhelm their early-season opponents, holding their opponents to shooting just 36.4% from the field.

Yet, through the team’s three-game losing streak, the script has been flipped for Vanderbilt’s defense. After surrendering just 58.8 PPG through its first five games, Vanderbilt has allowed slightly over 70 PPG to opponents in recent weeks.

When looking at what has changed for the Commodores, interior defense is an area that sticks out. After a strong start to the season, Vanderbilt’s interior defense has trailed off recently, something best evidenced by the Commodores surrendering over 30 points in the paint in all three of their recent losses. Specifically, the Commodores have struggled to prevent dribble penetration and post-up conversions. Accordingly, an increase in minutes for Amauri Williams against stronger offensive teams could be a solution to Vanderbilt’s issues.

Standing at 6’4,” Williams is far and away the Commodores’ biggest presence on the interior. The center has played extremely limited minutes this season—averaging just under 12 minutes per game—but has shown her ability in flashes to dominate on the interior. Despite coming in last on the team in minutes played, Williams ranks third on the team in rebounds per game. Offensively, Williams also offers interior scoring chops, which can complement Harbison’s offensive game on the perimeter.

.@sachaw33 ➡️ @AmauriWilliams_ for the easy layup as the Dores close the 3rd quarter with a 10-0 run. pic.twitter.com/GxoO6TERwl

As Ralph looks to find solutions to a defense that has been getting cut up on the interior, adding an athlete like Williams to the mix can certainly help deter opponents from the rim.

Despite the somewhat critical nature of these Minutes, it’s important to step back and look at how impressive the Commodores have looked out of the gates. Winning five games in a row and recruiting a star player like Harbison is no small feat. Even with the recent struggles, this team looks bound for competitive SEC play and a great chance at a postseason appearance. In just Ralph’s second year, this program is growing at a remarkable pace.

The Commodores will have plenty of opportunities over the next month to get right before SEC play begins on Dec. 29. Over their next two weeks, Ralph’s squad will face USC Upstate, Eastern Tennessee State, UT Martin and Louisiana Tech. For Ralph, these matchups should provide ample opportunity to experiment with different rotations and allow her team to find chemistry. After all, some of these Commodores are just getting to know each other.