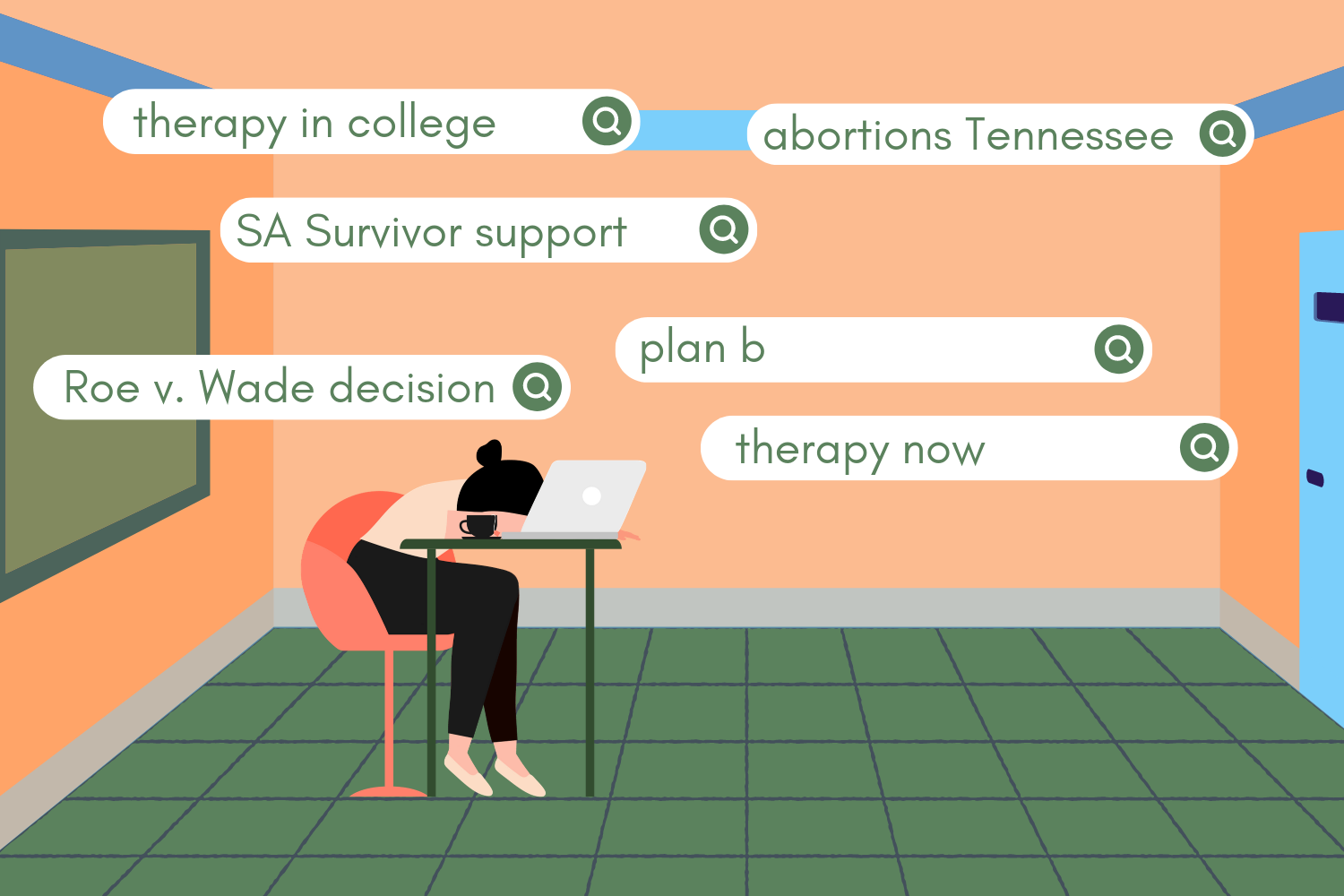 The overturning of Roe v. Wade strips agency from rape survivors who become pregnant; the most marginalized are hurt the most.

Editor’s note: This piece contains mention of sexual assault. A version of this commentary originally appeared in The Tennessean on Aug. 24, 2022.

About one month after I was raped during my first year at Brown University, I anxiously sat in my gynecologist’s office awaiting my pregnancy test results.

I was on birth control—the Nexplanon implant—so the chances of pregnancy were low but still a possibility. I twirled my earrings as I thought about the worst-case scenario: If positive, I wouldn’t know who the father was; my pregnancy would be a result of the most traumatic night of my life. At 19, what would I even do? Texas, my home state, had just passed the so-called “heartbeat bill,” outlawing abortion after six weeks of pregnancy. Would it already be too late?

I exhaled a sigh of unimaginable relief.

My anxiety soon returned. I woke up on June 21, 2022, to a tightening in my chest as I read headline after headline. Roe v. Wade (1973) had been overturned. I closed my eyes, and I was back in that fraternity basement where I was raped. My breathing quickened and shallowed, my heart racing. I thought of the men who had made this decision, many of whom have been credibly accused of sexual assault themselves. I felt violated, once again.

Survivors of campus sexual assault are already forced to navigate an immensely traumatic, personal and invasive process with little to no help from their universities. Adding an unintended pregnancy makes the process almost unbearable.

Roughly three million women in the U.S. experience Rape-Related Pregnancies (RRPs) during their lifetime. Of women raped by an intimate partner, roughly 30% experience some sort of reproductive coercion by the same partner. Reproductive coercion can involve a partner trying to impregnate a woman, attempting to convince them to stop using birth control, or refusing to use a condom during intercourse.

If positive, I wouldn’t know who the father was; my pregnancy would be a result of the most traumatic night of my life. At 19, what would I even do?”

Roughly 1 in 5 college women are sexually assaulted before graduation and approximately 24% of people who sought an abortion in 2014 were students. As you can imagine, the number of college women who seek Rape-Related Abortion (RRA) is staggering. So, what happens when this post-assault medical care becomes illegal?

How student rape survivors are affected

A critical aspect of the healing process for rape survivors begins with regaining a sense of agency over one’s body. During the time following an assault, it is imperative that survivors feel that they can make decisions about their bodies and healing. This agency is stripped from the rape survivor who becomes pregnant with the overturning of Roe v. Wade.

Particularly for student survivors, the effects of this ruling are compounded. Many college campuses already lack essential support measures for survivors, including minimal perpetrator accountability, convoluted accommodation processes and policies for survivors, insufficient training for advocates and very few Title IX personnel and mental health professionals. In fact, I sued Brown for these very problems with three fellow students. For survivors whose assault results in pregnancy, resources are even more scarce, especially in a state where abortion is illegal, like Tennessee.

In any of the 30 states where access to abortion is illegal or restricted, students seeking abortion may have to receive an unsafe abortion or travel to the closest “safe state,” which is Illinois for Tennessee. The former could lead to severe injury or death; the latter could cause immense financial and academic strain for students. The cost of birth—excluding all prenatal and postpartum care as well as future care for the child—averages $4,500 with insurance. This cost is unfathomable for many students, especially considering that roughly 40% of undergraduate students in the U.S. are low-income.

For many, a leave of absence from their academics could significantly affect their scholarships, financial aid and/or student loans, creating greater hardship. As a result, a survivor may be forced to drop out of school. Aside from these stressors, the process of receiving an abortion creates considerable emotional damage and traumatization for survivors.

With Roe’s reversal, the threat of having to carry a baby to term or leave the state to seek access to an abortion adds several new challenges to the already traumatizing experience of being an impregnated student rape survivor, especially for already marginalized communities. Black women and other women of color are more likely to seek out an abortion due to lower access to effective contraceptives and higher rates of victimization. They are also 3-4 times more likely to experience maternal health complications than white women.

Additionally, over 33% of transgender, nonbinary and gender-nonconforming people who become pregnant consider ending the pregnancy due to lack of insurance coverage and gender-affirming care, among other reasons. Considering that these individuals are disproportionately targets of sexual violence, forced pregnancy resulting from rape can affect them in unique and concerning ways. In addition to financial strain, pregnancy could lead to a slew of struggles for these individuals, including gender dysphoria, depression and anxiety.

In publishing this piece, I chose to use my name. I wanted to emphasize that the issues I am discussing are deeply personal and affect the lives of real people like myself. The victim was not some statistic or a Jane Doe. It happened to me, to Katiana Soenen.”

The most marginalized are hurt the most. We can view campuses as a microcosm of greater society. These numbers may not be specific to Vanderbilt, but they are mirrored in our community and college campuses nationwide nonetheless.

After I was raped, I was fortunate enough to not have any reproductive complications, allowing me to focus on physically and emotionally healing. Luck should not be a determining factor when it comes to a survivor’s health and welfare, however. We must fight to protect those who find themselves forced to decide how they will proceed with a Rape-Related Pregnancy, especially college students.

In publishing this piece, I chose to use my name. I wanted to emphasize that the issues I am discussing are deeply personal and affect the lives of real people like myself. The victim was not some statistic or a Jane Doe. It happened to me, to Katiana Soenen. I believe coming forward with a face and a name attached allows me to speak out to the best of my ability.

A year later, I’m a transfer student, new to Vanderbilt, new to Nashville and away from the trauma I endured at Brown; I love being a student here. However, attending school in Tenessee, which has one of the harshest abortion bans in the nation, I am often reminded of the fear I felt knowing my rape may have resulted in pregnancy. I made the decision to transfer to Vanderbilt before Roe was overturned, before Tennessee’s abortion ban took effect.

As a student and a survivor, I am committed to changing the policies that can directly harm me and my peers. I urge other students to do the same: Register to vote, find student organizations that support survivors and promote reproductive justice, engage in productive discourse and seek active ways to combat campus rape culture.

Rape is already one of the most extreme violations of a survivor’s body. Please, do not violate us any further.

The Vanderbilt Hustler welcomes and encourages readers to engage with content and express opinions through the comment sections on our website and social media platforms. The Hustler reserves the right to remove comments that contain vulgarity, hate speech, personal attacks or that appear to be spam, commercial promotion or impersonation. The comment sections are moderated by our Editor-in-Chief, Rachael Perrotta, and our Social Media Director, Chloe Postlewaite. You can reach them at [email protected] and [email protected]
All The Vanderbilt Hustler picks Reader picks Sort: Newest
Subscribe
Login
4 Comments
Newest
Oldest Most Voted
Inline Feedbacks
View all comments
C
Catherine Barkley

Thank you for your courageous, powerful words!

I work at Nashville’s local Sexual Assault Center. We are working on legislation to add an exception for rape/incest. For those reading this story and wanting to do something, please sign and share our petition. Together, we can make this happen!

Katiana, I would love to connect with you. Would you send me an email? [email protected]

Thank you for sharing this, Katiana. Your bravery goes a very long way for other survivors, and I commend you for it. I wish you luck on your healing journey <3

Bravo Katiana! Thank you for speaking up and saying the truth. Your voice will be heard.