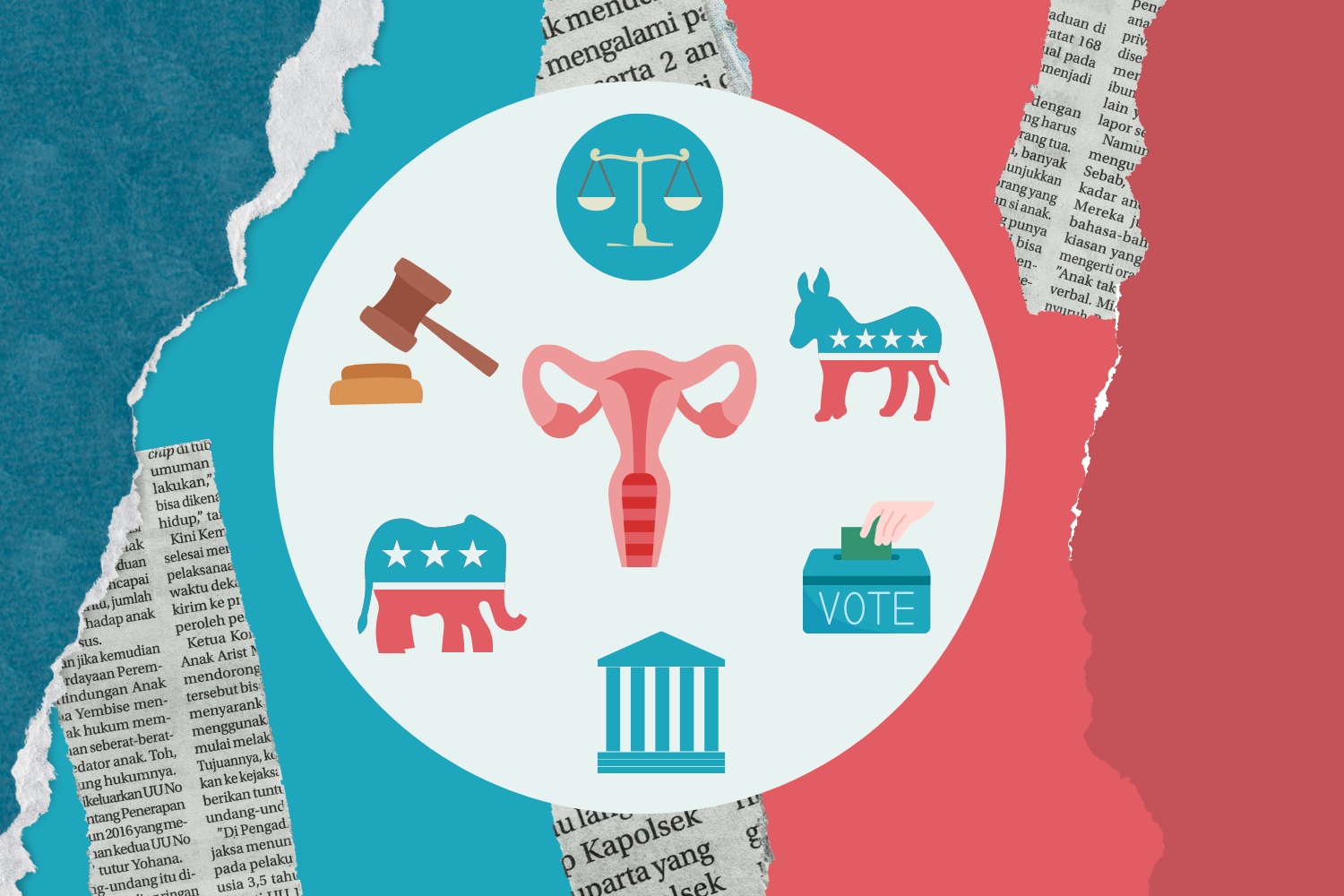 TADROSS: Abortion is more than a debate over murder

In the face of the overturning of Roe v. Wade, we need to do better moving forward, and stop letting political polarization convince us that women’s rights and the right to life are mutually exclusive.

The single most common question posed in the Roe v. Wade (1973) debate might not only be the wrong focus in our discussion of reproductive rights but may actually be why we are moving backward.

On June 24, the Supreme Court overturned Roe, allowing states to restrict abortion access before the point of “viability” and harming the health and autonomy of women across the country. Roe protected the right to choose to end a pregnancy under certain circumstances. This right will now be left up to individual states to decide.

Roe v. Wade and its reversal have been points of intense political polarization in the U.S., with division over whether abortion is murder. However, I believe that this question makes the right to life and women’s rights seem mutually exclusive, implying that the abortion debate is black and white. As a result, productive discussion is held at a standstill, and we have failed to do justice to both women and children.

To support health at large from now on, we need to recognize abortion’s effect on developing lives as well as the lives of women. Reframing how we view abortion is essential for us to work together, and achieve goals for women’s health rather than political agendas.

Legally, much of the abortion debate regards whether a fetus is a biological life or a life with rights (a “person”). While a biological life is any functioning life, “personhood” is required for such a being to be protected under the law. Hence, partisan polarization is often not a disagreement over whether abortion is taking a life but, instead, over different definitions of “murder.”

Many anti-abortion individuals and religious bodies argue that a fetus is a person from conception, making abortion murder. Pro-abortion rights advocates often counter either that abortion is not murder because a mother’s life could be endangered due to pregnancy or that abortion is preferable to potentially letting a child live an unfulfilled life.

Both sides miss the point.

Whether abortion is murder is a semantic question that makes us ignore our common ground and retreat further into our political ideologies.”

Supreme Court Justice John Roberts explains in his essay “Science Disputes in Abortion Law” that there is scientific consensus that a fetus is a living member of our species.

“This biological fact did not mean that they are persons within the protection of the law,” Roberts writes.

Some pro-abortion rights individuals argue that abortion is not murder because they define murder as taking a life unjustly. Consider the pro-abortion rights Bazaar editorial titled “Abortion is Not Murder.” Political editor Jennifer Wright argues that abortion would not be murder even if a fetus had conscious agency, because the “life” poses a threat to another. Even if a mother’s health is not directly in danger, her livelihood can be. We often justify taking the lives of those who threaten our lives in the form of self-defense or war. The abortion debate is no different.

To these pro-abortion rights individuals, when life-taking is justified, it is not murder.

On the contrary, some anti-abortion individuals define murder as taking a human life, even if it is done in self-defense or saves a developing fetus from living a disadvantaged and unfulfilled life.

These definitions explain some of the religious objections to abortion. For example, Catholicism defines murder as taking any life from the point of conception. The religion does not object to killing in self-defense though, demonstrating that its objection to abortion is rooted in this definition of murder rather than religious statutes.

Whether abortion is murder is a semantic question that makes us ignore our common ground and retreat further into our political ideologies. To see real progress for women’s rights, we need to recognize where many people agree—that abortion is taking a life, especially during the second and third trimester of pregnancy—and examine the real costs and benefits of this procedure.

When is it justified to terminate a life in the face of an unwanted pregnancy?

Answering this question, rather than getting caught up in the word “murder,” is essential for us to work toward agreeable and equitable parameters for reproductive rights moving forward.

It is easy for a man to protect himself, his career and his finances from an unwanted pregnancy simply by leaving.”

The availability of abortion has changed the direction of women’s lives. In the 1970s, the average age to become a mother was 22. Today, that age is 26. When contraceptives fail, abortion allows women to still delay pregnancy and pursue careers that require post-secondary education. States like Missouri, Wyoming and West Virginia rank among the states with the most restrictive abortion laws and each has lower female college completion rates and female median salaries than regions with better access, like Washington, D.C., and California.

On the contrary, men have always been able to leave in the face of pregnancy to protect themselves. In fact, 80% of teen fathers and 20% of all fathers flee when a child is born. It is easy for a man to protect himself, his career and his finances from an unwanted pregnancy simply by leaving. Men can leave women and children if a pregnancy is at an inopportune time, yet women are expected to derail their lives and education for that same child. Without the option of abortion, women are forced to put another life before their own and, in many cases, sacrifice themselves to compensate for a man’s unwillingness to stay.

However, even when it is justified to take a life, we should try to avoid it.

Women’s potential discomfort with having an abortion is not a reason to shame women for making this decision or encourage the elimination of abortion. Abortion should not be advertised as a form of birth control but as a tool that exists beside it so that women do not have to be entrenched in caring for an unwanted life, especially one that men can easily escape.

Likewise, we need to consider the safest forms of abortion for both the fetus and the mother as well as the phases of pregnancy at which abortion should optimally take place. Although most Americans agree about limiting second and third-trimester abortions, some states allow later-term abortions or have no limits on when an abortion can occur. On the contrary, the Dobbs decision overturning Roe v. Wade allows states to restrict abortion at any point of pregnancy or ban the procedure entirely. Now, states have the autonomy to choose whether abortion will be completely legal, illegal, or in between within their borders—and some will choose to go in each direction.

Women’s rights and respect for human life are not mutually exclusive. We need to acknowledge that it is justified to end a biological life under certain circumstances.”

This decision represents another step back in the fight for women’s rights. We also see steps back for women in the promotion and debate of abortion to the point of unsafety. In reality, many people want to support women’s rights, yet oppose abortion when it is taken too far. We need to recognize this common ground if we want to make real progress in women’s health and children’s safety.

Although Supreme Court decisions are supposed to remain insulated from public opinion, they typically follow public consensus over long periods. The majority of Americans believe in some middle ground for abortion legality, but when we let political questions stop us from communicating our common ground, we will always let one side win. We can each play a role in promoting a better future for abortion rights by not letting the debate over whether abortion is murder drive us apart.

Women’s rights and respect for human life are not mutually exclusive. We must acknowledge that it is justified to end a biological life under certain circumstances.

Although it is never an easy decision, making abortion a regulated right will benefit women and children.

The right to life and women’s rights can and do, coexist. Moving away from semantic and unproductive debates over the definition of murder will hopefully enable Americans and our courts to stop taking huge steps backward and focus on policy that can create a safer future for both women and children.

CORRECTED: This piece was corrected on July 12, 2022, at 10:47 a.m. CDT to remove an inaccurate statistic regarding the percentage of women who later regret having an abortion.

The Vanderbilt Hustler welcomes and encourages readers to engage with content and express opinions through the comment sections on our website and social media platforms. The Hustler reserves the right to remove comments that contain vulgarity, hate speech, personal attacks or that appear to be spam, commercial promotion or impersonation. The comment sections are moderated by our Editor-in-Chief, Rachael Perrotta, and our Social Media Director, Chloe Postlewaite. You can reach them at [email protected] and [email protected]
All The Vanderbilt Hustler picks Reader picks Sort: Newest
Subscribe
Login
6 Comments
Newest
Oldest Most Voted
Inline Feedbacks
View all comments
R
Ronald Miller

Convicting women of premeditated murder and putting them to death by hanging them in the gallows for taking an abortifacient and aborting a fertilized egg, an embryo, or an undeveloped non-viable fetus that looks like a fish, is not a morally superior argument. Rather it is just a twisted, immoral way for a bunch of sick and ignorant far right conservative fanatical religious women hating misogynists to get off watching women suffer and die.

Did you even read the study you cited that claims 44% of women regret their abortion? This is blatantly false. Directly from the study: “detailed descriptive letters from 45 women prepared in response to a request by a pastor of an upper-middle-class Protestant congregation in Florida”. Does this seem representative or unbiased? I’m going to give you the benefit of the doubt and assume that you’ve never taken a stats or research class. If this is the case, I highly recommend HOD 2500 with Van Schaack. However, something tells me you were hoping no one would actually click on that link…

Opinion section or not, now is not the time to push an agenda as truth.

Hi Rachel,
Thank you for being an attentive reader and catching this error. We apologize for the misleading and inaccurate nature of this wording. The article has been corrected with the statistic removed.

Your rationale is not linear and although making concessions still comes off blatantly partisan.

The U.S. Marshals Service declined to comment on specific security measures following Friday’s ruling but told VOA it was continuing to assist the court and its facilities.