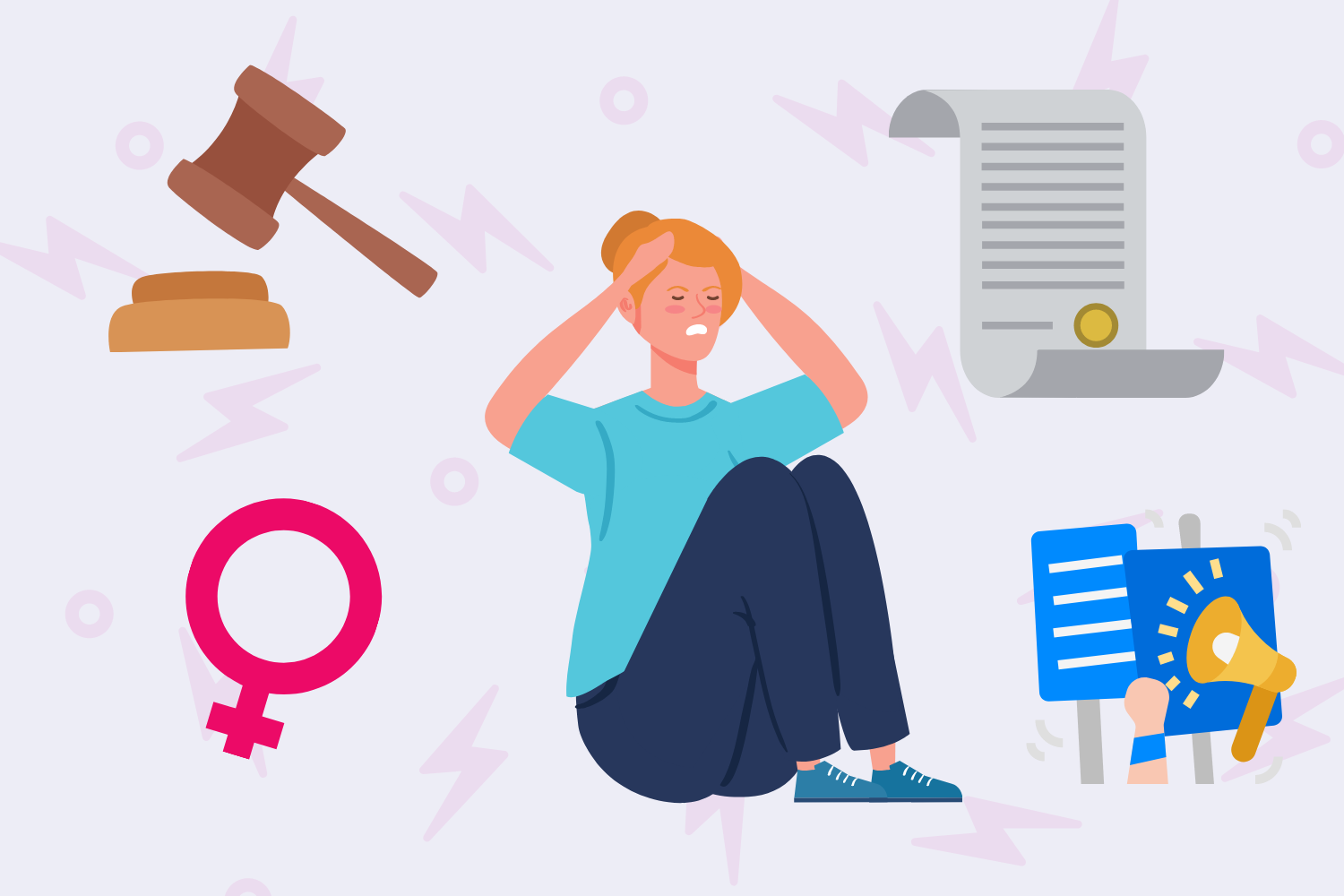 No one else should get to decide what a woman does with her body. End of story. (Hustler Multimedia/Emery Little) (Emery Little)

No one else should get to decide what a woman does with her body. End of story. (Hustler Multimedia/Emery Little)

ABEL: Our bodies, our choices.

Texas's senate bill 8 denies women their right to an abortion. I cannot give up my platform as a writer when there is a war on our bodies and a war on our rights.

I am scared to make enemies because I believe a woman should be able to choose for herself.

I am scared of my own family and friends distancing themselves from me for speaking out about abortion. I am terrified to be labeled a “baby killer” or a murderer. I am terrified that I will be told to take it down, to keep my mouth shut on things I do not understand. Writing this piece has been terrifying.

What is even more terrifying is that I and so many other women may need access to an abortion, but not be able to get one. If I am assaulted, as many women in college are, my efforts here at Vanderbilt will be turned upside down. During the enactment of Senate Bill eight in September, if I had returned to my home in Texas seeking an abortion, I would have been denied a choice. I would have been denied the ability to choose the dreams and aspirations that got me to Vanderbilt and propel me through my classes. Although the law was temporarily blocked by a federal judge in Texas, it was partially reinstated only two days later. Temporary blocks are exactly that— temporary and unclear.

How would I achieve my dream of going to medical school, becoming a pediatrician and making a difference if I am raising a child at 20 years old?

Over the summer, Texas adopted the most restrictive abortion laws in America, banning abortions after six weeks of pregnancy. The law bans abortions once cardiac activity can be detected in the embryo, often before a woman even knows she is pregnant. In an interview with the New York Times, obstetrician Dr. Jennifer Villavicencio asserts that it is extremely possible and actually very common for women to reach the six-week mark of pregnancy and not know they are pregnant. Six weeks pregnant is only two weeks after a woman misses their period—many do not notice until several missed periods. Between school stress, medication side effects and changing nutrition, most college students wouldn’t bat an eye at the first missed period.

Some of these might sound like reasonable justifications for abortions to you—and you would be correct. But this will also affect women who, for whatever reason, simply do not want to be pregnant. No one should get to decide what happens with another person’s body, not even to save a life

You need written permission from a dead body before life-saving organs can be taken from them. You cannot be forced to donate blood, no matter how dire the situation. No one else should get to decide what a woman does with her body. End of story.”

Legal power over our bodies

Last year, Tennessee governor Bill Lee signed one of the country’s most stringent abortion restrictions. The bill aimed to ban abortions once a fetal heartbeat has been detected, around six weeks, often before a woman even knows she is pregnant. It also contained provisions that would allow the father to veto an abortion by petitioning a court for an injunction. A number of complaints and petitions from the ACLU of Tennessee argued that the bill gave men legal power to control women’s bodies. In mid-September, The 6th U.S. Circuit Court of Appeals  prohibited enforcement of this bill, arguing that “access to pre-viability abortion is a constitutionally protected right” and declaring that the bill’s provisions are “constitutionally unsound.”

While I can breathe a sigh of relief here in Nashville, for women in Texas there is no reprieve.

Senate Bill 8 denies women the choice to not have children they are unequipped to care for. The Texas law left no exception for incest or rape and is enforced through private citizens. The bill even encouraged laypeople to sue patients, healthcare providers and even uber or Lyft drivers for “aiding and abetting” women who choose to find safe abortions. The law pits private citizens against other private citizens, allowing self-proclaimed “abortion vigilantes” to prey on desperate women. Anyone who is successful in suing a provider could have earned at least $10,000. The Texas Right to Life organization even set up a “whistleblower” website where anyone can submit anonymous tips.

What is happening in Texas and across the country is the result of a decades-old tradition​​ of intimidating and threatening women at abortion clinics, bomb threats and mass shootings at family planning organizations and even cold-blooded killings of abortion providers. The brief reign of this abortion law should scare you, whether you’ve been affected or not.

Roe v. Wade established that a pregnant woman has the right to choose an abortion. She has a right to choose a safe and legal way of terminating a pregnancy, no matter the reason. When abortion was not legal, it still happened. If it is made illegal, it will still happen. Pregnant women have always attempted abortions and pregnant women will continue to attempt abortions. However, when women aren’t able to have their doctor perform their abortion, they resort to unsafe abortion methods, like taking toxic drugs or blunt trauma to the stomach. These home abortions are unsafe, risky and life-threatening. Women will die completely preventable deaths every day because their government does not give them another option.

Even when abortion is legal, most pregnancies do not end in abortion. A 2018 surveillance study conducted by the CDC saw a record low total of 614,820 abortions reported, a rate of 11.3 abortions per 1000 women. An increase in comprehensive sexual education and education on contraceptives has reduced the rate of risky sexual behavior and misinformation. Despite this, anti-abortion groups and politicians create a narrative that abortions are a huge problem.

Yes, I Hear You

One of the most common anti-abortion counterarguments goes that willing sexual intercourse implies acceptance of a possible pregnancy. In other words, they believe that one’s choice to engage in behavior makes one fully responsible for the consequences. However, faulty contraception is like a broken window. When you return to your dorm and find your laptop missing, do you believe that the thief had a right to take it because your window was easy to open?

The staunchest opposition to my argument comes from those who believe that conception is life. However, those who deny the right to an abortion under any circumstances fail to see that their argument undercuts itself. When a mother’s life is in danger, we should not make a value judgement on her life versus that of her unborn fetus. We should never decide that the child should be saved and the mother sacrificed because of the child’s potential for more healthy years of life. It is morally irresponsible to believe that a pregnancy must be brought to term even in case of the mother’s death simply because it is a matter of nature when we have the medical means to save the mother. This same argument applies to an unwanted or abused child born into a household with a devastating psychological toll.

I do acknowledge the sadness of abortion. I devote my studies here at Vanderbilt to learning about child development and my free time to doing research with disabled children. My future career will involve working with babies and mothers every day. I too struggle to remove the humanity and the sadness from terminating a pregnancy.

I will never call a developing fetus a “ball of cells” to make abortion seem less human. I will not make the argument that a fetal heartbeat is just a cacophony of electrical signals.

My heart aches for every woman who has ever had to make the choice to terminate her pregnancy. There is so much pain and sadness in this process. I understand how one could feel so deeply for an unborn child. If I was in the same situation as many Texas women face today, my heart would be breaking.”

No matter how you see abortion, I hope that you can understand how gut-wrenching this law is for women. I hope that you can feel how dehumanizing it is to have your own bodily autonomy taken away from you. I hope you can feel how terrifying it is to know that your aspirations are conditional. I hope you understand how terrified young women are in this country.

I was raised to believe that loving my neighbor is my highest calling. I was raised to show kindness to others, especially those who are most in need of it. Judging women for their choices and restricting their constitutional rights is not that.

What is even more terrifying is the impact this law has on teenagers, women of color and low-income women who can no longer access abortion services. According to the Guttmacher Institute, 75 percent of abortion patients in 2014 were poor or low-income. In Texas, 70 percent of abortions in 2019 were provided to women of color. This measure places insurmountable obstacles for Black women in Texas, who already face high maternal mortality rates. The Guttmacher Institute also estimates that the new restrictive bill has created a 14-fold increase in driving time to receive a safe abortion.

How can we help women with chronic illnesses for whom a pregnancy might be life-threatening? How can we help undocumented women who cannot easily travel to another state to find care? How do we help those who can’t find between 400 and 3000 dollars to cover the procedure in neighboring Oklahoma or Louisiana? What about those who do not realize they are pregnant until it is too late?

I have dreams and hopes and ambition. Every woman at Vanderbilt, and everywhere, does. We have spent our entire lives working towards our future, and without our input or consent, our control has been stripped away from us. My worries about being judged for what I write do not compare to the worries women face about having children they cannot care for. My fears of writing this article do not compare to the fears that women face across the country today.

To anyone who identifies as female in Texas, here at Vanderbilt and at universities across the country—you do not deserve this. You should not be afraid of having your rights taken by the state you live in or being sued by your fellow citizens. You should not feel so vulnerable and so ashamed that you turn to dangerous alternatives.

You should not feel less worthy because you were born with a uterus.