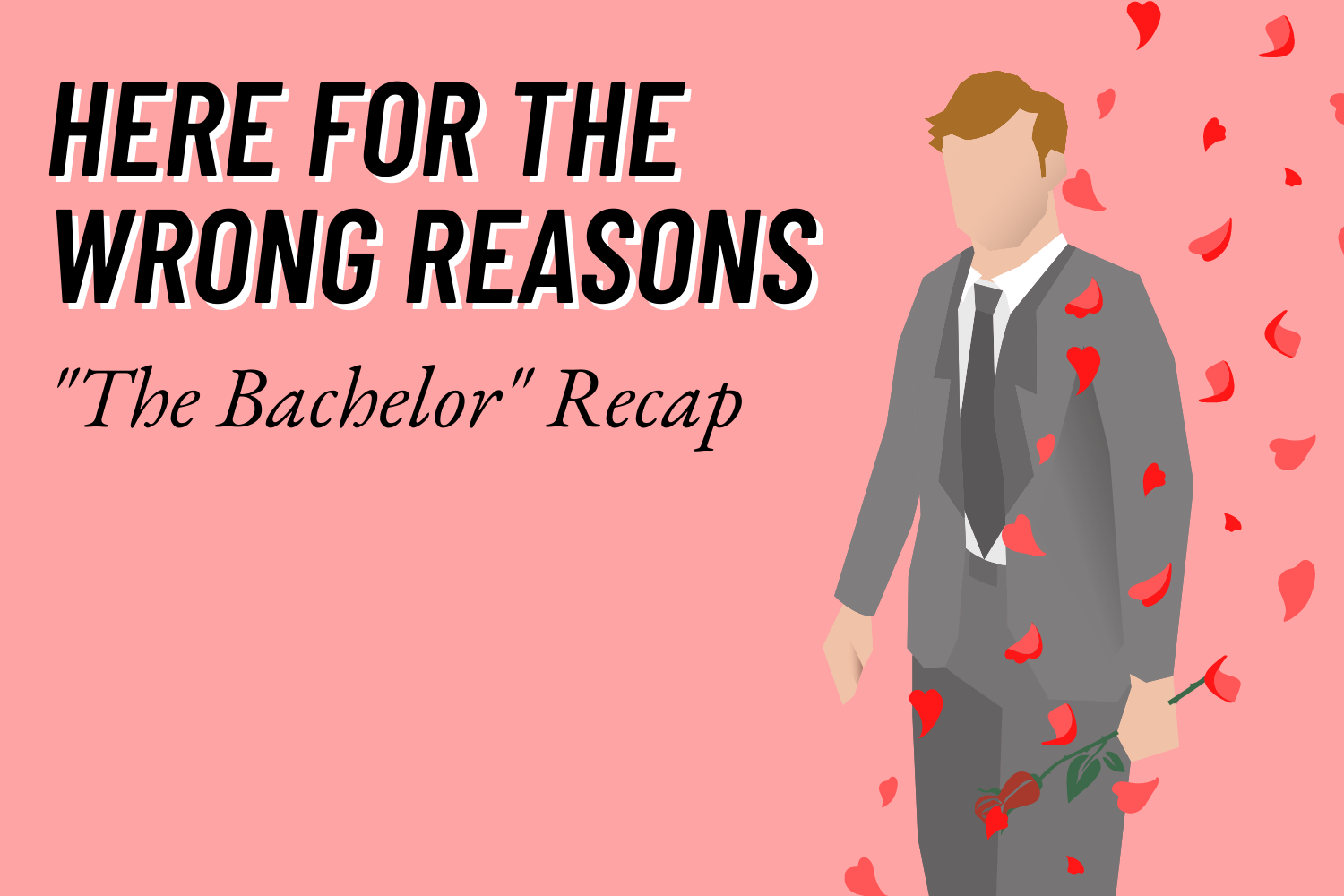 Here for the Wrong Reasons: Episode 7 of ‘The Bachelor’ Season 26

A recap of the seventh episode of the latest season.

Welcome to “Here for the Wrong Reasons,” where each week I’ll be recapping all of the champagne-guzzling and petty “Can I steal you for a second?”s of the 26th season of “The Bachelor.” Nothing boosts your confidence about your own love life like watching a bunch of desperate 20-somethings competing for a stranger’s affection! Check in every week for episode recaps and updates on Clayton Echard’s journey to find love.

Hometowns are on the horizon, but there’s still drama to be sorted out. This week, Clayton is tasked with determining whose families he wants to meet and who he wants to send home to inevitably join the next cast of “Bachelor in Paradise” (BIP). Read on to find out whose fathers are going to be interrogating our Bachelor next week!

Battle of the ages

After Clayton confronted Sarah about Mara’s claims that she wasn’t ready for an engagement last week, Sarah storms into the women’s hotel suite ready to avenge her name. She calls Mara out for allegedly putting words in her mouth, but an unapologetic Mara stands her ground. Sarah then sinks her barbs in, telling Mara that Clayton identified her actions as “a last-ditch effort by someone who feels like they’re going home,” before spinning on her heel and walking away with rose in hand. To the camera, Sarah remarks, “[Mara] spun herself a web, and the only thing she’s getting out of is Croatia tomorrow in the middle seat through the Jersey turnpike with some cheap wine.” Though this sounds like a plotline in a Billy Joel song, this is a pretty brutal insult.

At the cocktail party, Clayton pulls Serene first, because he has a surprise for her: Mason jars with glowing lights, in a nod to the fireflies that symbolize Serene’s cousin who passed away. This is honestly a really touching moment, though I’d bet my college tuition on the fact that a producer was behind it all.

Mara and Sarah (hey, that rhymes!) are back at it again. Mara was hurt by Sarah’s “last-ditch” comment, which is fair, but that’s what you get for sticking your nose in other people’s business on this show. Much like a frat president who thinks new members need to learn their place, Mara thinks that Sarah—who is nine years her junior—is being cocky and overconfident. The other women listen from behind the curtains, and it’s unclear whose side they’re on. (Something tells me that neither Mara nor Sarah are particularly popular in the house.)

In addition to Rachel and Sarah, who already have date roses, Clayton gives roses to Susie, Serene, Gabby and Genevieve. He sends home Eliza and Mara, which means we never have to hear Mara whine about how much she “brings to the table as a grown-ass woman” again (until BIP, at least).

And with that, Clayton’s final six are off to Vienna, Austria!

Clayton’s first date in Vienna is a one-on-one with Susie—her second—that is likely her reward for being the first to tell him that she’s falling in love with him last week. Genevieve, who has never had a one-on-one and had to go on the two-on-one with Shanae, is rightfully upset.

Susie gets the classic shopping spree date, which many leads, including Arie Luyendyk Jr. and Matt James, have given to their final picks, so she’s definitely a top contender. Clayton and Susie drive around Vienna in a cute car, stopping at Austrian designer Eva Poleschinski’s store. An emotional Susie tries on all kinds of poofy gowns and Clayton seems to like watching. I do not approve of the objectication, but they’re really enjoying themselves.

Susie returns to the hotels laden with shopping bags, flaunting her great date to the very jealous and distraught women. A gorgeous red ball gown is delivered to her at the hotel for her to wear to dinner, and it’s a good thing she gets out of there quickly because the women are ready to riot.

At dinner, Clayton and Susie have such a vapid conversation that I lost track of how many times they said the word “like.” The night is very bland, but they’re both into it, and Susie scores a rose, which means that she and Clayton are headed to Hometowns next week.

Sarah, Teddi, Genevieve, Rachel and Gabby are on this week’s group date, which is decidedly less fun than Susie’s shopping spree. The date is marketed as “couple’s therapy,” but it’s really Sigmund Freud-inspired psychoanalysis. Each woman takes turns rotating into therapy with Clayton and the psychoanalyst, which is not only unbelievably awkward but also puts the women in an incredibly difficult position. Either they can share all of their emotional baggage, or they’re getting sent home with their literal baggage.

In her session, Gabby shares that she feels “like, so much,” while Genevieve has a hard time opening up at all, leading to her getting sent home. She handles it with class, but the problematic subtext of the breakup is: you didn’t bare your soul to me on a widely-broadcast television show, so you’ve gotta leave. Next, Rachel is called in. She shares that she trusts Clayton and his decision-making, but is nervous about the whole process, which in turn makes Clayton nervous because he really likes her and “can see a future with her.”

After Rachel is Sarah, who declares, “I love therapy and I’m so good at it,” and that’s just her first red flag of the night. While she’s in the session, the remaining women discuss how Sarah is a liar, which she definitely confirms. Sarah starts crying to the psychoanalyst about how the other women haven’t liked her since she got a second one-on-one and how that’s so unfair. For my “Mean Girls” fans, this scene is basically Gretchen Wieners’ famous line: “I’m sorry that people are so jealous of me. But I can’t help it that I’m popular.” The psychoanalysis catches on to Sarah’s ploy, though, and tells Clayton—in front of all of the women on the date—that someone was “performative.” Why couldn’t this lady have been around to analyze Shanae?

At the cocktail party, Clayton is stressed about having a “performative” woman still around. He decides to get to the bottom of it, which entails him individually asking the women about each other. Gabby shares that Sarah has been acting really overconfident around the other women and making them feel as though their connections to Clayton can’t compare to hers, a sentiment that Teddi echoes.

Clayton confronts Sarah, and, as expected, she sheds a bunch of crocodile tears and denies it all, saying that she “feels so thrown under the bus.” For once, Clayton is actually perceptive and tells her, “I’m just gonna be real with you, I really felt like you were trying to fake cry. It didn’t feel genuine at all.” She tries to protest, but he stands his ground and sends her home. I questioned whether Clayton would ever grow a backbone in my last recap, and it looks like we have an answer. Good on you for doing the bare minimum, Clayton!

Our stressed out Bachelor is too fragile to give out a group date rose, so he ends the night there, much to the chagrin of the three remaining rose-less women.

First, Serene and Clayton have a serious conversation. They debrief about the moment they shared at the last cocktail party talking about Serene’s cousin who passed away, then Clayton admits to having trust issues, especially after Sarah’s deception.

On a more lighthearted note, they take a carriage ride around Vienna, stopping to dance in a town square with some “real local couples.”

At dinner, Serene admits that it takes awhile for her to open up and hasn’t introduced her parents to a significant other since she was a teenager. However, Clayton seems to have cracked the code, because she tells him that she’s falling in love with him, earning her the rose and a ticket to hometowns.

Susie and Serene already have roses and have thus secured their spot for Hometowns. Only two of the three other women—Gabby, Rachel and Teddi—will join them. Clayton’s first rose goes to Rachel and his second to Gabby, meaning that Teddi’s family will not have the immense pleasure of meeting Clayton. Teddi is incredibly bummed, but she definitely knows her self-worth: “I do feel worthy of love, but I keep coming up short. I don’t understand. I do want to be someone’s first choice, and I deserve that.” She’s a fan-favorite, so here’s to hoping she has better luck in Paradise.

And with that, we’re entering the final stretch of Clayton’s journey to find love. Hometown dates are officially back in their original travel format, so tune in next week to get the scoop on Clayton’s visits to Virginia Beach, Denver, Oklahoma City and Orlando.