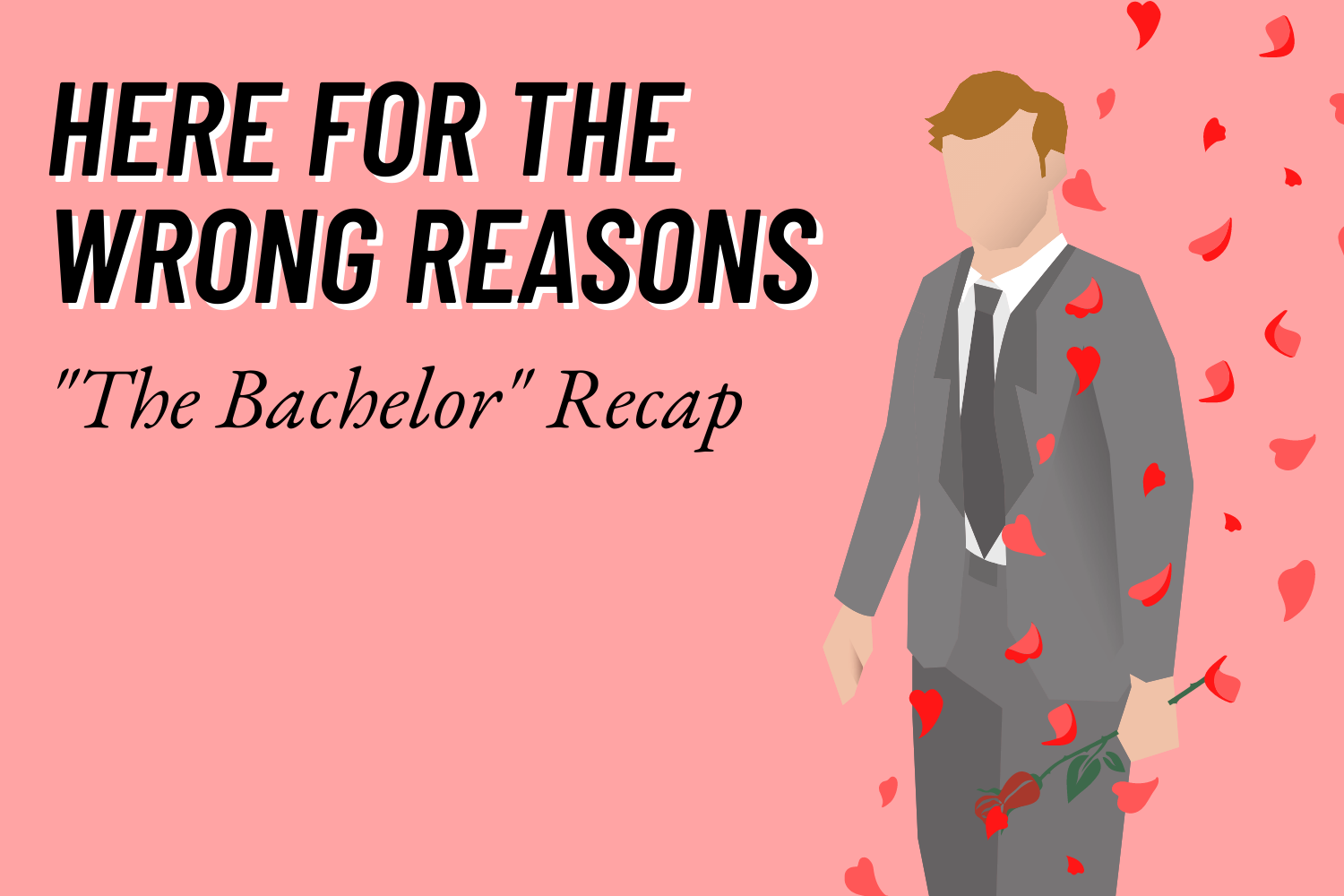 Here for the Wrong Reasons: Episode 1 of ‘The Bachelor’ Season 26

Welcome to “Here for the Wrong Reasons,” where each week I’ll be recapping all of the champagne-guzzling and petty “Can I steal you for a second?”s of the 26th season of “The Bachelor.” Nothing boosts your confidence about your own love life like watching a bunch of desperate 20-somethings competing for a stranger’s affection! Check in every Wednesday for episode recaps and updates on Clayton Echard’s journey to find love.

I blinked after Michelle’s finale, and what did I open my eyes to find a mere second later? The first episode of Clayton’s season of “The Bachelor,” duh. The show is once again airing on its usual Monday nights (thank god), and I’m excited for the first season of “The Bachelor” since Matt James’ monstrosity a year ago, which was so bad that I refused to recap it.

Let’s dive into it, Bachelor Nation.

For those of you who aren’t familiar with the newest lead, join the club. Clayton Echard, the eighth-place runner-up on Michelle’s season of “The Bachelorette,” was tapped to be the next Bachelor after getting approximately two minutes of screen time. He wasn’t much of a standout besides the last episode he appeared on, where he built a pillow fort with some kids and ugly-cried about how badly he wants to be a husband and father. Rumors that Clayton would be the next Bachelor started swirling back in early September, over a month before Michelle’s season even premiered. He wasn’t exactly a fan-favorite choice—especially compared to some of Michelle’s other suitors, like Rodney, Joe and Brandon—but hopefully he’ll surprise us.

Here are the main things you need to know about our newest Bachelor: he is 28 years old, from Eureka, Missouri; walked onto the football team at Mizzou; and likes dogs and family, much like every other guy you’ve ever talked to on Hinge. Also, he’s got a bizarrely long face, but at least he’s tall (to the tune of 6’5″).

New year, new host
Following in the footsteps of former Bachelorettes Tayshia Adams and Kaitlyn Bristowe, who hosted the past two seasons of “The Bachelorette,” Jesse Palmer, the former Bachelor from the show’s fifth season, will be guiding Clayton—who looks like he could be his younger brother—on his journey to find love.

Bring on the women

Well, not quite yet. Clayton has a crop of 30 women vying for his heart (and the corresponding Instagram clout and People magazine cover), but his journey doesn’t start with the typical limo exits. Salley, a blonde Raven Gates look-alike whose job title is “Previously Engaged,” arrives at Clayton’s hotel room hours before the night is supposed to start. She shares that she’s unsure if she can go through with the show, as she was supposed to get married that very week and hasn’t fully moved on. This raises a lot of questions, including, “Did she pull a Jed Wyatt and apply for a reality dating show while still in a committed relationship?” Plus, she was allegedly spotted at her own bachelorette party just a month before filming began, so she reeks of “here for the wrong reasons.” However, girl-crazy Clayton appreciates her candidness and offers her the First Impression Rose if she’ll stay—if this is an indication of Clayton’s future decision-making skills, this season might not be as boring as we expect—but she tearily rejects the offer and leaves. It’s too bad that she’s gone because she fits the five B’s of the quintessential “Bachelor” contestant: blonde, bland, boring, boobs and baggage.

You didn’t think the producers would pass on their beloved virgin trope, did you? (Think Colton, Mike P. and Ashley I.) Teddi, a 24-year-old surgical unit nurse, is this season’s token virgin, though she tells her family in her intro video that she’d go to the Fantasy Suite with Clayton. For her sake, I hope Teddi doesn’t make it that far, because given how vanilla Clayton’s personality is, I’m not convinced her first time would be too exciting.

Calling all country music fans: Rianna, a registered nurse from Dallas, comes in sporting a cowgirl hat and says, “Why don’t we save a horse, and you can ride a cowgirl?” Maybe they’ll be knockin’ boots by the end of this season…

Sarah, a wealth management advisor from New York City, brings Clayton a little tiger token because both of their alma maters—Mizzou and Clemson—have a tiger mascot. Cute.

Tessa, an HR specialist from Connecticut, reminds Clayton that her name is “asset” spelled backwards. Simple, but clever.

Shots! Shots! Shots! Kate, a real estate agent from California, suggests that they calm their nerves by each holding one of her nips … nips of liquor stuffed into her cleavage, that is.

I’m not sure this classifies as a good entrance, but it’s dramatic, and we love drama. Cassidy rides in on a kid-sized motorized car, which is promptly run over during the following entrance by Shanae, who’s driving a huge pickup truck. This is the perfect setup for future villainhood, so keep an eye on Shanae, the recruiter from Ohio.

63-year-old retiree Helen exits the limo, much to Clayton’s obvious distaste. Turns out, Helen is no cougar; rather, she’s there to be flight instructor Rachel’s “wingwoman” (pun very much intended).

While we’re on the topic of misogyny, Jane, a 33-year-old social media director, arrives in a vintage car because she’s soooo old compared to our 28-year-old Bachelor.

Ivana, a bar mitzvah dancer (which is apparently a full-time job? Who knew.), slinks up to Clayton and enters the house without saying a word. It is weird.

Paging the fashion police: Ency, a 28-year-old sales manager, emerges in the biggest fashion faux pas of the night. Her sequined dress is yellow and pink ombre at the top, with a singular strap going right across her cleavage. It absolutely screams suburban Midwestern prom.

Since the fashion police are already here, I have to give personal trainer Melina a shoutout. Her entrance is perfectly fine—she’s wearing moon shoes and bounces up into Clayton’s arms, in typical franchise fashion—but she’s wearing a godawful silver necklace that can be best described as both spiky and wavy?

Gabby, an ICU nurse, brings Clayton a custom pillow with his likeness on it, telling him, “I just want to sit on your face.” Lovely. Fun fact: Gabby has dated both Blake Horstmann and Dean Unglert, making her one of two women that the two have history with, along with Caelynn Miller-Keyes.

The doctor is in! (Not in the office, in lingerie). Kira, a physician from Philadelphia, arrives in a medical lab coat, red lingerie and nothing else. Clayton licks his lips in response.

Eliza, a marketing manager from Berlin, brings a sausage to share with Clayton, “Lady and the Tramp”-style. If the Bachelor franchise doesn’t work out for her, there’s always the exotic dancer field.

Harkening back to the franchise’s favorite taxidermist, Kendall Long, Hunter shows up with a live snake wrapped around her neck, hoping for “love at first hiss.”

For the night’s kinkiest limo exit, Elizabeth, a real estate advisor from Colorado, has Clayton turn around so she can whip him. Maybe she can join Eliza the sausage girl-turned-exotic dancer.

Samantha, an occupational therapist from California, arrives in a bathtub with a glass of champagne in hand and asks Clayton if he wants “some of this bubbly personality.” Gimmicky, sure, but I approve.

Since Clayton is so quirky and relatable, he spills a drop of his drink while giving his first toast to the women. Teddi gets the prized first kiss, while Dr. Kira listens to Clayton’s heart with her stethoscope before planting one on him. Clayton also chats with Rachel, the flight instructor (I refuse to say “pilot” because I have Peter Weber-induced trauma), about how she loves to travel. Snoozefest, but there’s definitely a connection there.

Claire, a spray tanner (yes, you read that right) from Virginia Beach pulls Clayton aside for a mini tailgate, but after playing cornhole and eating some wings, homegirl is plastered. (You can’t say it’s not like a Wesley tailgate.) Over the course of the night, Claire continues to get more drunk, noting that her time with Clayton “was a catastrophe” and that she would “eat him and spit him out” before slurring, “I hate him.” (To be honest, I can’t say that she’s alone on that last point.) Clayton catches wind of this drama from elementary school teacher Serene, who hints to Clayton in an unusually uncatty way that he might want to check in with Claire. When he confronts her, she has no problem leaving, and as Mara, the 32-year-old entrepreneur wearing a two-piece prom dress says, “Let bygones be bygones and like, bye, be gone!”

During this drama, one woman notes, “If Clayton’s not your type, something’s probably wrong with you, is all I have to say.” Guess something’s wrong with me, then. Sure, he’s got good dimples, and I’m certainly not mad about his height, but other than that, he’s so blah.

The first rose of the season (that almost went to Previously Engaged Salley) goes to Teddi the 24-year-old virgin, who got Clayton’s first kiss, because “there’s a clear connection” when they talk. Maybe there’s hope she’ll lose her V-card in the Fantasy Suite, after all.