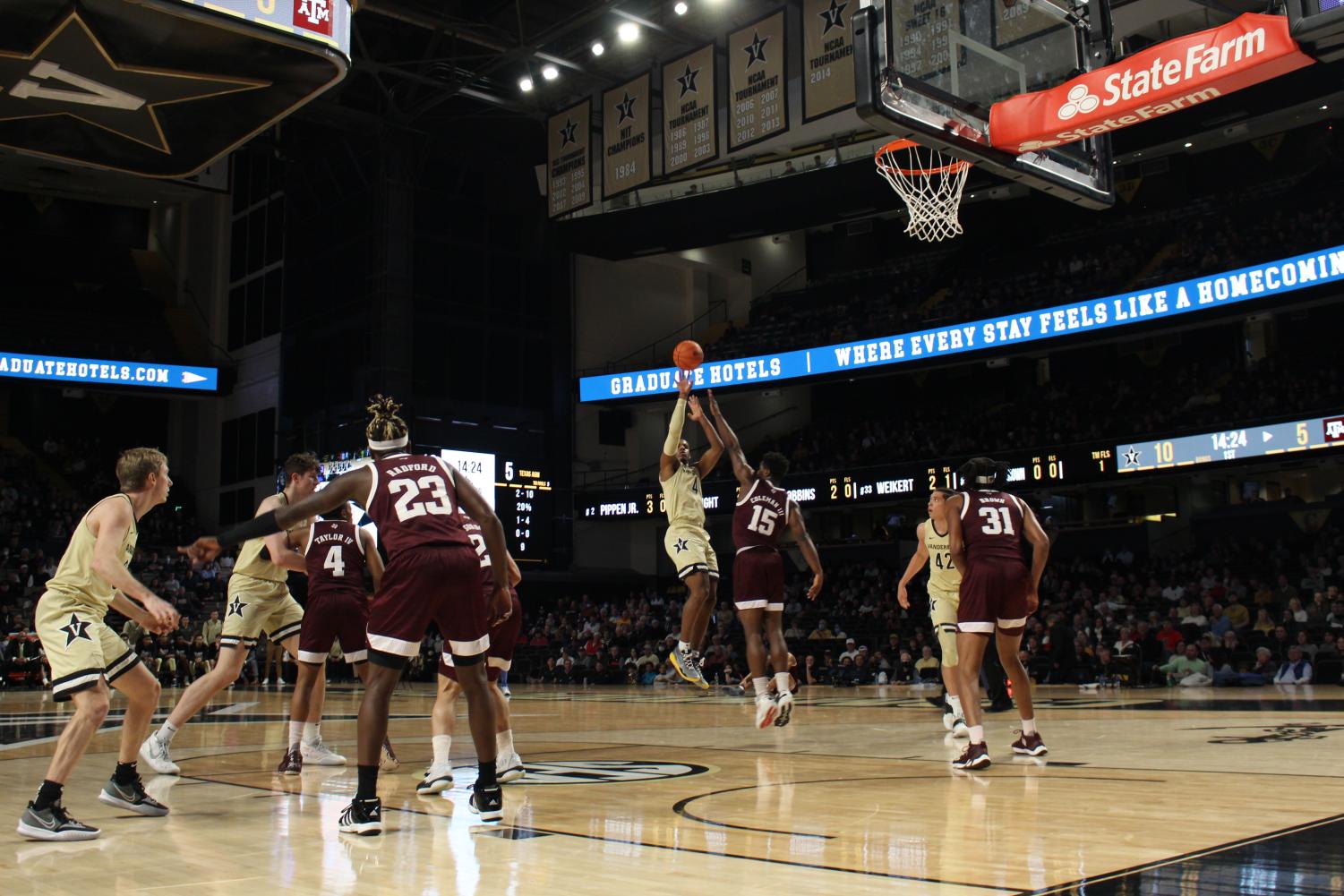 Junior Jordan Wright pulls up for a jumper in Vanderbilt’s clash with Texas A&M on Feb. 19, 2022. (Hustler Multimedia/Geena Han)

Strong performances from Vanderbilt’s student-athletes are especially paramount as the Commodores enter the home stretch, hoping to clinch a postseason berth for the first time since 2017.

With just three games remaining in the regular season, the Vanderbilt Commodores have hit their stride.

In the past 10 days—since the last Memorial Minutes was released—the Commodores have taken advantage of their opportunities and displayed the force they can bring against some of the best teams in the nation.

Half a week after Vanderbilt fell to state rival Tennessee, the Commodores traveled to a hostile environment in Auburn, Alabama and continued to play their brand of basketball. Vanderbilt started the game with an 11-0 lead over the Tigers, but Jabari Smith and Walker Kessler combined for 53 points, proving too challenging for the Commodores. Although Vanderbilt was handed a 94-80 loss to the No. 2 Tigers, Jerry Stackhouse’s offense displayed a serious threat to Auburn, with Vanderbilt finishing the night shooting a solid 44.6% from the field.

Vanderbilt moved on from their hard-fought battle against Auburn quickly and played their next game with a vengeance just a few days later. When the Commodores hosted Texas A&M on Senior Night, there was never a doubt in the air at Memorial Gymnasium. Vanderbilt edged out the Aggies 72-67, but this time it was the defense that proved to be the formula for the Commodores’ success. Junior guard Jordan Wright had a special night, notching six steals—which is two shy of the Vanderbilt record—to the Commodores winning their sixth SEC game. The Commodores hadn’t put up a performance like this since the 2017-18 season.

Later in the week,Vanderbilt was ready to shock the world and defeat the No. 24 Alabama Crimson Tide on Tuesday, Feb. 22. Commodore fans were ready to see a show from star junior Pippen Jr. on his birthday, and indeed they did. Pippen Jr., the leading scorer in the SEC, notched six assists and scored 26 points. He impressively took advantage of his explosive abilities and drew several free throw opportunities, converting on 14 of 18 of his attempts at the charity stripe. The Commodores ultimately fell short to Alabama 74-72.

Pippen Jr. will need to take command moving forward as the team hopes to make a deep run in the SEC Tournament and potentially punch a ticket into the NIT, or even the NCAA Tournament. For this to fall into place, Vanderbilt will need to follow these three steps.

Utilize The Roster to its Potential

Vanderbilt’s star is the second-best 3-point shooter in the SEC. No, it’s not Pippen Jr. The man that has an impeccable 3-point percentage of 44.6% is 6’7’’ sophomore Myles Stute.

Stute has made 55 of 127 3-point attempts, but why does this statistic feel so under the radar to Vanderbilt fans? Stackhouse—although highly touted as a coach that gets the best out of his players—is not drawing up enough plays for Stute to get open and be the primary shooter.

When Vanderbilt faced Alabama, Stute didn’t take a single shot from inside the arc and only took three shots from the 3-point line, where he converted on one of those opportunities. The lengthy sophomore has only taken one 2-point attempt in the past four games, effectively making him a gadget 3-point shooter and not taking advantage of his full potential. Vanderbilt should take advantage of possessions that feature Stute on the court and give him more opportunities to score by getting him open looks from the 3-point line and elsewhere on the court.

Before Feb. 2—when Liam Robbins made his Vanderbilt debut at Rupp Arena against the Kentucky Wildcats—Vanderbilt had only one player above 6’8’’.Quentin Millora-Brown, the 6’10’’ senior, has been the starting center all season but was asked to handle the frontcourt by himself for the majority of the season. With Millora-Brown playing 61.8% of the minutes, the Commodores had to play small ball and asked transfers Jamaine Mann and Terren Frank to play the center position. Although they played hard, it was a clear mismatch when they had to face off against taller opponents.

Vanderbilt trailed No. 24 Alabama by two points with 20 seconds remaining in the game Tuesday night, and Stackhouse displayed a lineup that he thought was best for the team. The lineup did not feature Robbins, because Stackhouse felt that Millora-Brown and Robbins on the court would surrender Vanderbilt’s opportunities around the 3-point line. Instead of playing Robbins, Stackhouse put sophomore Trey Thomas on the court alongside Pippen Jr., Wright, Stute and Millora-Brown.

“We thought we would be down three,” Stackhouse said. “It was a play to get Trey [Thomas] a shot in the corner. It was kind of a misdirection. We were pulling Scotty behind, get to the baseline and had Trey wide open in the corner.”

All in all, Vanderbilt’s ability to win the game should not have come down to that moment. The Commodores missed a quarter of their free throw opportunities as they failed to hit nine of their 36 attempts at the line.

“We missed free throws throughout the night,” Stackhouse said. “If we make half of those that we missed tonight, we win this game…They beat us to the 50-50 balls.”

Vanderbilt’s past three games have been highlighted with a gritty fight against No. 2 powerhouse Auburn, a much-needed victory over SEC foe Texas A&M and a gut-wrenching defeat to No. 24 Alabama. The Commodores have played stellar offense these past three games, averaging nearly 75 points per game. Although there have been many positives, Vanderbilt’s ball security has been the main plague that forces them to play catch up.

Vanderbilt allowed Auburn to score 94 points and surrendered 11 3-pointers. Stackhouse had his student-athletes adjust well and the story of the Texas A&M game was quite different. Vanderbilt forced the Aggies to a 23.8% rate from the 3-point line but went back to their old habits a few days later, when they allowed Jahvon Quinnerly to make all three of his attempts from the 3-point line.

“I thought our defense was really, really good, our rotations were good in the first half,” Stackhouse told the media after the Alabama game. “And then we just allowed them too many second-chance points. It was the guards some too. It wasn’t just the bigs not rebounding.”

Pippen Jr. has been the X factor in Stackhouse’s program gaining national attention. The 21-year-old junior is expected to be playing his last season with the Commodores. In his tenure at West End, the California native has made quite the impression—scoring 19.7 points per game, which is the most for any student-athlete in the SEC.

Pippen Jr. will be vital to the Vanderbilt program for the remainder of the 2021-22 season as strong performances in the last three regular season games are paramount for the Commodores. Currently, they are 14-13, and to qualify for the NIT Tournament the Commodores need to have a record of at least .500.

Vanderbilt’s next three games feature the Florida Gators, the Ole Miss Rebels and the Mississippi State Bulldogs. No conference game is a guarantee, and the Commodores will look to run the table and make a strong push in the SEC Tournament. Pippen Jr. will be commanding the way and will look to continue to facilitate the basketball to his teammates and generate offensive success by keeping defenses on their toes.

Pippen Jr. has been using his agility to his advantage by driving downhill to the basket and drawing a lot of fouls. Pippen Jr. converted 14 of 18 free throw attempts against Alabama and helped his teammates get to the charity swipe by facilitating the basketball in ideal situations. Vanderbilt had 36 free-throw attempts, but moving forward the Commodores will need to convert on more than 75% of shots from the free-throw line in order to have the best chance at making a formidable run in the SEC Tournament.

Vanderbilt is in a prime position to run the table in the regular season if Pippen Jr. continues to spread the ball and draw free-throw opportunities. The Commodores can then enter the conference tournament with a lot of momentum and a unique opportunity to shock the world.