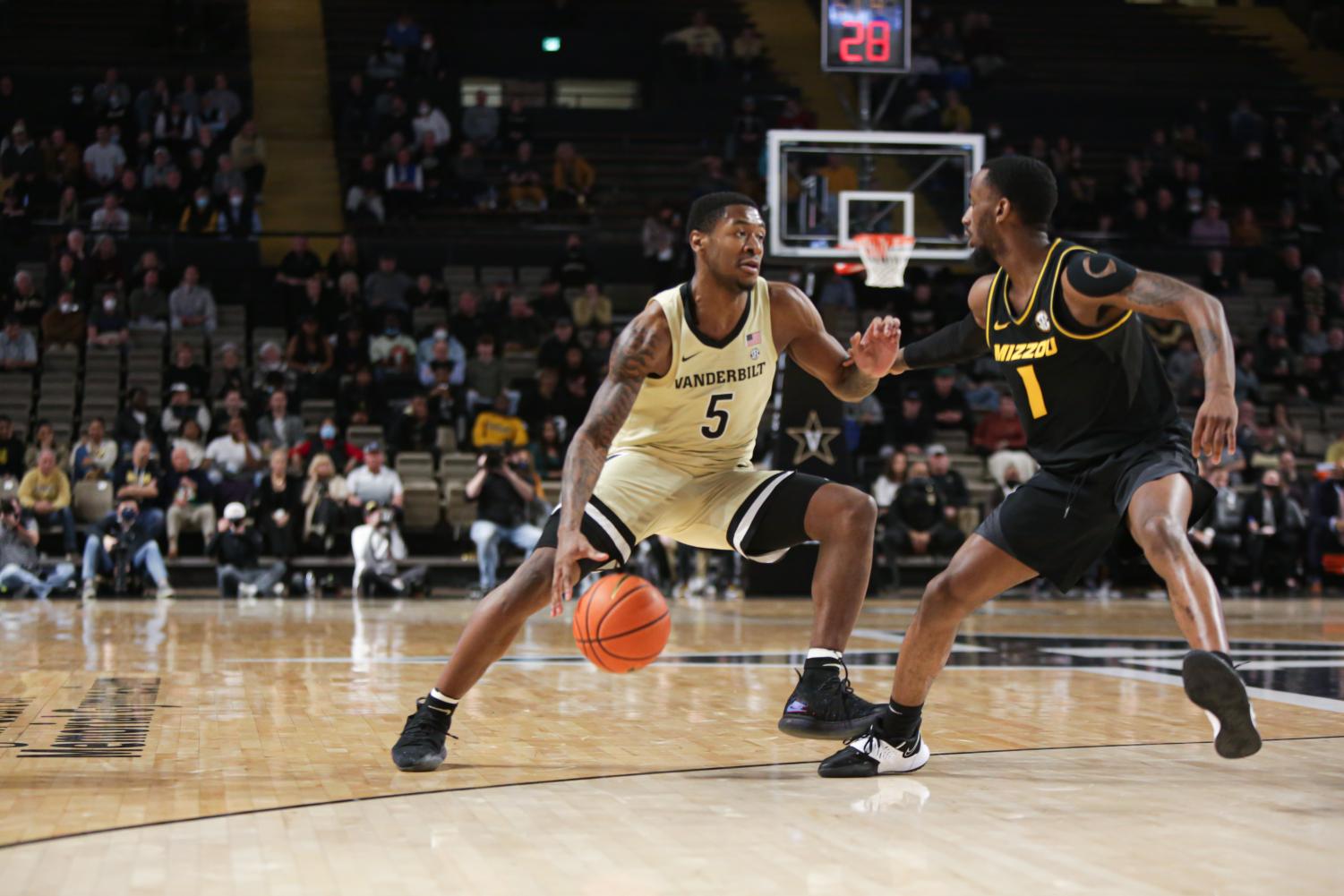 Freshman guard Shane Dezonie drives to the basket against Missouri in the Commodores’ matchup on Feb. 8, 2022. (Hustler Multimedia/Mattigan Kelly) (Mattigan)

Freshman guard Shane Dezonie drives to the basket against Missouri in the Commodores’ matchup on Feb. 8, 2022. (Hustler Multimedia/Mattigan Kelly)

With back-to-back SEC wins, Jerry Stackhouse and Vanderbilt are looking for the first NCAA Tournament appearance for the school since 2017.

Finally, (nearly) whole. Though center Liam Robbins is playing just over 10 minutes a game, he and Rodney Chatman have brought new life to a Vanderbilt side whose previous motto was, “Keep Calm and Give it to Scotty.”

The Memorial debut of Robbins was highly anticipated and it certainly delivered. One game after the Commodores’ biggest win of the season over No. 25 LSU, Robbins hosted a block party against Missouri. He collected four blocks in just under 11 minutes on the court and each stuff energized a midweek home crowd that was simply delighted to see their 7-footer make an impact.

Happy to have you back, Liam. 🛑 pic.twitter.com/9WQODLQiij

Chatman showed his worth against LSU just days before, totaling 24 points, 18 of which came from beyond the arc. The graduate transfer guard regularly doesn’t flash as much on the stat sheet as he does in-game, but last Saturday, Feb. 5, he made sure to stamp his seal of approval on the first Vanderbilt victory over a ranked opponent in two years.

Though wins over LSU and Missouri were a necessity if the Commodores wanted to keep their tournament hopes alive, the loss to No. 16 Tennessee did deliver an unfortunate blow to these odds. Due to injuries and some damaging losses, Vanderbilt is having to play catch-up with other NCAA Tournament teams and needs a big win or two to boost themselves into contention for consideration by the committee.

However, it’s still possible-ish. Ultimately, the Commodores will need gutsy wins against tough opponents. Their first chance comes soon: Their next game on Wednesday, Feb. 16 is an away contest against a No. 2 Auburn team that has dropped only one game since the beginning of December. They won’t be punished in the NET rankings if they lose, but they’ll miss out on a golden opportunity for a quality win. Regardless of how they finish, their tournament status will be determined by how the teams they’ve already played fair, considering the win-categorizing nature of the NET system. So, basically, here’s to hope, Commodore nation.

The biggest reason Vanderbilt lost to Tennessee wasn’t poor shooting. The Commodores shot 37% from 3, 70% from the line and 41% overall. They actually shot the ball better than the Volunteers, except on the free throw line, where Tennessee made 71% of their attempts.

“We like our chances when we’re able to get back and get our defense set and able to lock into a team’s game plan with our schemes and different things like that,” head coach Jerry Stackhouse said regarding Vanderbilt’s loss to Tennessee. “It’s so much harder with live-ball turnovers when they’re able to get ahead of you and get opportunities without us getting our set.”

Against LSU, the Commodores won this category nine to seven. And in their win over Missouri, they tied the Tigers 12 to 12 on offensive boards, also topping them in the second-chance points category.

This particular struggle is surprising. Fifteen to four is quite a margin—one that you wouldn’t expect from chance alone. Yet big men Robbins and Quentin Millora-Brown populated the paint for the Commodores for essentially the whole game, begging the question: what happened?

It’s hard to say it was simply an issue of a size mismatch, but it was clear that Stackhouse’s squad had trouble boxing out multiple big bodies. Should we have seen a Millora-Brown-Robbins lineup at some point? While this would have been entertaining, it wouldn’t have been wise to use your two natural centers on the court at the same time. Staggering their play has been Stackhouse’s bread and butter, especially while Robbins is on a minutes restriction, and working out how to use them both offensively would have been a headache to figure out midgame.

It boils down to executing the basics. Boxing out and gaining advantageous positioning should be re-emphasized next practice if the Commodores want to have any chance against a sizable Auburn side.

The other benefit of Robbins and Chatman returning is the pressure they take away from Myles Stute and Jordan Wright. Over the last three contests, the two combined for 25 points per game on 16-of-32 shooting from deep and just under 13 rebounds per game as well. At times, Stute’s 3-point shot took over the show and completely changed the momentum on the court.

The LSU game is when Stute really found his stroke. Whenever he saw a bit of open space, he took advantage, finishing the game 5-of-8 from beyond the arc. This confidence booster has a multiplying effect for the whole team, and fans can expect Stute to continue shooting with confidence as he did in these last three SEC faceoffs when he went a combined 12-of-21 (57%) from 3.

The team is shooting better not only from deep but all over the court, and much of this is due to spacing that Stute and Wright have provided from the wings.

This was the role Stackhouse had envisioned for the two of them. He didn’t need them to be the focal points of a Pippen Jr.-led attack. Rather, the pair has settled into a game plan where they can take advantage of the attention given to ball handlers or big men down low and stretch the floor by raining 3s with consistency.

Together, the two were plus-15 over the course of the last three games. Additionally, it’s safe to say that at least some of the team’s success can be attributed to Stute’s occasional trash talk—he makes his presence known whether he’s scoring the basketball or not. On top of all this, neither fouled out in any of the past three games despite both playing large minutes and solid defense each outing.

With both hitting their stride at a key time in the season, it’s exciting to think about the ceiling for this Vanderbilt squad down the stretch this year and into the next as well.

It’s not an easy road to the NCAA Tournament for the Commodores. They need Quadrant 1 and 2 wins if they’re going to make a convincing case. And to be honest, they can’t slip up much more with only six games and the SEC Tournament left on their slate.

The good news for Commodore fans is that Vanderbilt has three Quadrant 1 chances—at Auburn, home against Alabama and at Mississippi State—and two Quadrant 2 chances left—Florida and at Ole Miss. This simply means that every game from here on out could mean the difference between making and missing the big dance. It’s up to the men in Black and Gold to capitalize.

“This is a big opportunity for us,” Stackhouse said of the Auburn matchup. “We feel like our defense travels. If we’re able to take care of the ball and rebound the basketball—I think those are things that get us in trouble in our losses.”

If Vanderbilt fails to qualify for the NCAA Tournament, fans can still look for a possible NIT appearance as the Commodores would only need to finish the year 3-5. Making the NIT would still be a massive victory for the Stackhouse administration, and a good run in the event would also generate momentum going into the 2022-23 season.

To finish this campaign, they’ll have their full roster, ready to square off against the tough competition ahead. With some help from past opponents, it’s possible Vanderbilt grabs a low seed, and from there, let the madness ensue.