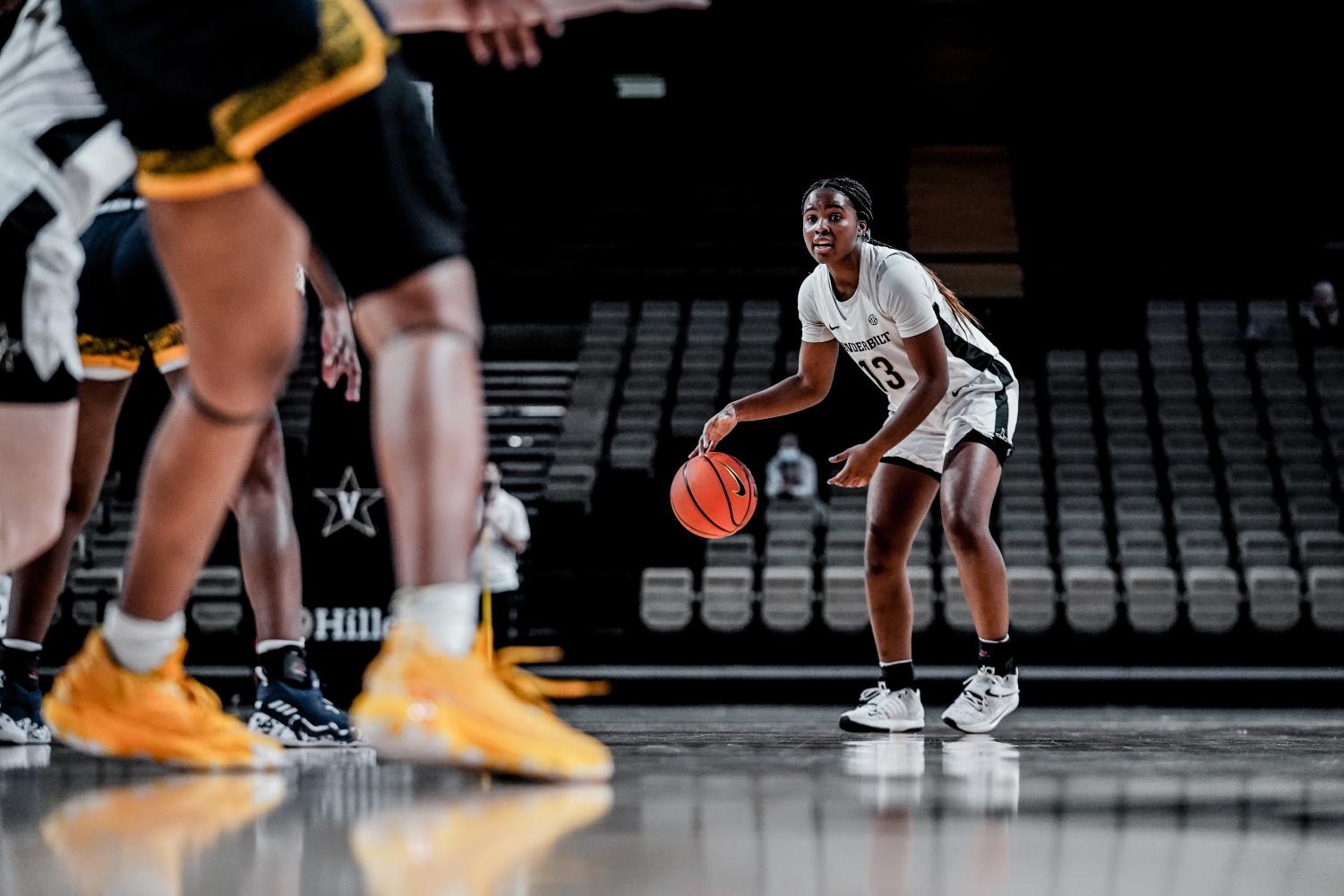 Vanderbilt guard De’Mauri Flournoy dribbling up top in a game early in the 2021-22 season. (Vanderbilt Athletics)

De’Mauri Flournoy: Whatever it takes to win

When asked to describe herself, Vanderbilt guard De’Mauri Flournoy only needed one word: “Determined".

Vanderbilt guard De’Mauri Flournoy is no stranger to helping her team win.

Whether that was at Carrollton High School in Georgia, or now at Vanderbilt, the freshman has always been able to score at every level. Up to her junior season in high school, she compiled 1,560 career points, 343 assists and 241 steals, placing her at No. 64 among the nation’s top recruits, while proving that she can be a key contributor on both sides of the floor in the process. Additionally, at the end of her junior year, she was awarded her region’s Player of the Year award

“My mentality in high school was just to win, so I would do whatever I had to do to win,” Flournoy told The Hustler. “Whether that was scoring, assisting, defending. Mainly it was just me scoring, just putting the ball in the hole.”

One of Flournoy’s biggest basketball influences at a young age was her aunt, Jackie Kenlaw. Kenlaw coached in the WNBA as an assistant coach for the Portland Fire, Seattle Storm and Houston Comets. She even served as the interim head coach for the Washington Mystics for a brief period of time.

“I’ve learned so much from her,” Flournoy said. “Everytime we talk, she just gives me little pointers, and she helps with any little thing. When I was coming up here [to Nashville], she told me that I was considered a smaller guard, but that doesn’t matter. She told me to use my size to my advantage, to get post players involved.”

By the end of her junior year, she had earned a 4-star prospect ranking from ESPN, with an overall score of 91 according to that same report. Her accomplished high school campaign was good enough to earn her offers from several schools, with a top three comprised of Georgia Tech, Miami, and of course, Vanderbilt.

“I just felt it was the greatest fit. Who doesn’t love Nashville?” she said. “My favorite part is probably the city. Coming from Atlanta, there’s something about the city of Nashville that I really like.”

When White was fired, Flournoy knew that Vanderbilt and Shea Ralph were still the right choice for her. It’s not easy to deal with a coaching change before even setting foot on campus, but Flournoy was undeterred, which speaks wonders to her commitment to the school.

“Definitely because I’m committed to the school itself, and I’m a very committed person,” Flournoy said. “I was like, ‘No matter who’s here, we’re going to succeed anyway.’ And then they brought in Coach Ralph, who’s great, so everything worked out.”

As much as Flournoy feels that Vanderbilt was right for her, Vanderbilt reciprocates.. Ralph had high praise for Flournoy and expects big things as she continues to grow within the new head coach’s program.

“We see something really, really special in her, but we see it in flashes,” she said. “Our job right now is to get her to understand what she has to do day in and day out. We have to make sure that today, she gets better than she was yesterday, and then her confidence will grow and we’ll start to see it more in games.”

Flournoy, only 20 games into her career as a Commodore, is already proving that she can be as special as Ralph anticipates. As a freshman, she’s far down on the depth chart, but still averages about 14 minutes a game. In the Commodores’ Nov. 30 win against Chattanooga, Flournoy put up 17 points, two rebounds, two assists and a steal, her best performance of the season, proving that she can score at the collegiate level.

“My biggest strength is my ability to create, whether that’s me scoring or getting my teammates an easy bucket.” she said. “I’m also a very determined player. If you’re in front of me, and I want to get to the bucket, I’m going to.”

Flournoy also recognizes the team’s strengths as a whole.

“Our best strength is our defense,” she said. “We attack people on defense and then get offense from our defense.”

The stats certainly support this statement, as the Commodores are second in the SEC with 10.5 steals per game, but Flournoy isn’t satisfied. She knows she still has a lot of work to do, especially on the defensive end of the floor, to make herself a complete player and fit into Vanderbilt’s defensive mentality.

“Honestly, [I can improve on] everything. Defending, scoring, everything.” she said. “If I had to choose one thing, it would be defending guards that are bigger than me and just being smarter. Working smarter, and not harder.”

While she is shooting just 27.5% from 3 on the season, Flournoy has shown an ability to knock down long-distance shots at an efficient rate, as seen in her performances against Tennessee Tech and Chattanooga, where she shot 4-of-5 and 3-of-7 from behind the arc, respectively.

Her commitment once again comes to mind. She’s already made it to the next level. She’s already had a successful career to this point. But she’s not willing to settle for anything less than greatness and is determined to improve every aspect of her game. The next step for her could be using her drive to improve defensively.

The Commodores are coming off of two straight wins against Kentucky and Auburn last week. They started with a much needed win over the Wildcats that broke a five-game losing skid, lifting them above .500 once again. They followed that performance up with an 81-66 win against the Tigers in a game where the team was firing on all cylinders. They shot 70% from downtown, and nabbed seven steals.

“We can definitely work on not thinking as much, so, when we see a lane, to just take it.” Flournoy said, when speaking about what the team can improve on. “Just don’t overthink.”

One thing is certainly true: Flournoy’s potential is sky high, and it’s only a matter of time before she achieves that and much more.

“I think the right word [to describe Flournoy] is potential. She’s going to be a problem for other teams.” Ralph said. “She has limitless potential, and right now, she’s learning the pace that you have to play at this level, and how to be able to sustain it. If she can do that, we’ll see pretty soon that she’s a major contributor to our team.”