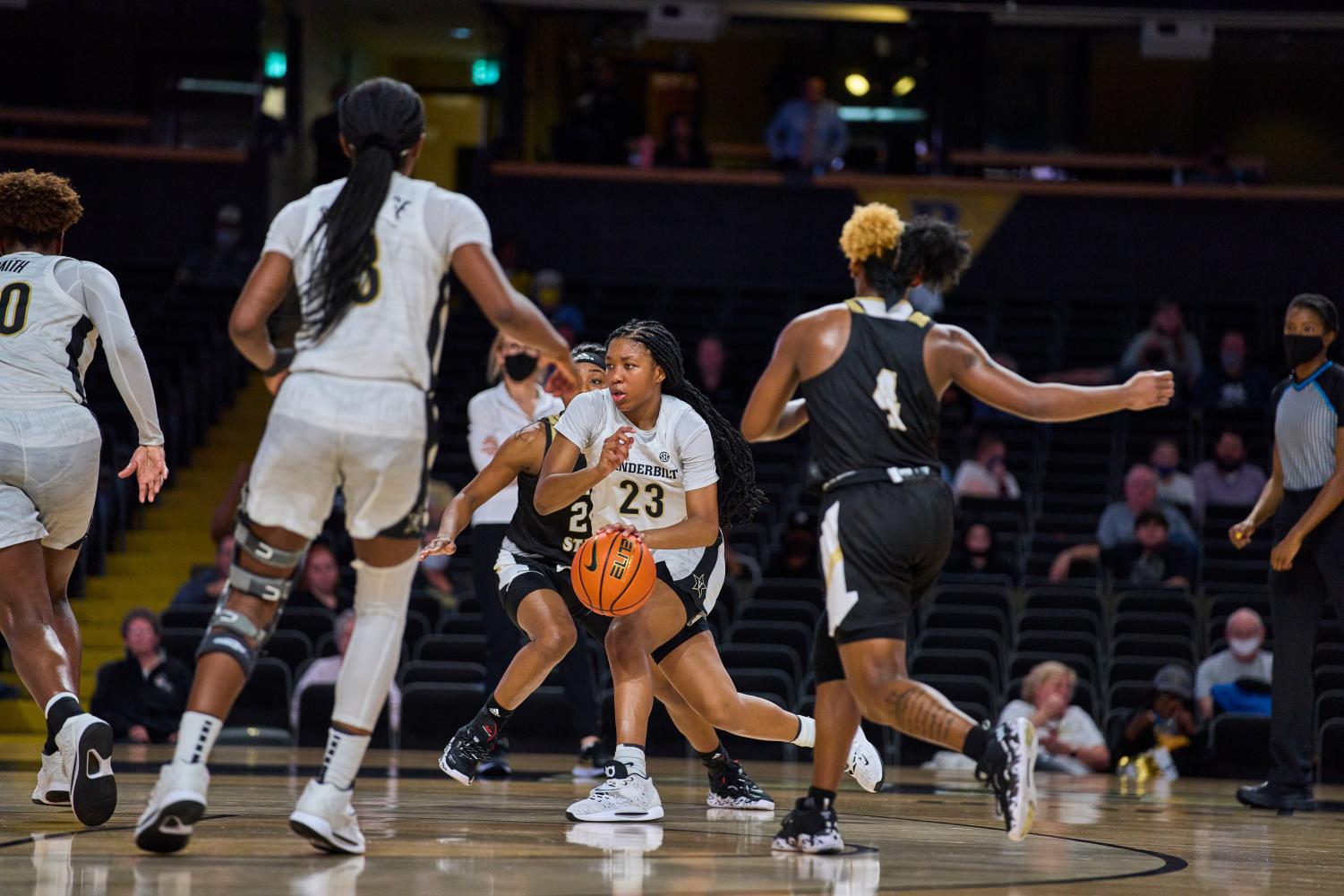 Vanderbilt will enter SEC play with a 9-5 record following a four-game winning streak in which they beat opponents by an average of 27 points per game.

“Don’t take a bad shot, but you do have one more left.”

That’s what Vanderbilt’s coaching staff told freshman Iyana Moore during the Commodores’ last timeout against Alabama State on Tuesday. Moore needed one 3-pointer—which would be her ninth of the game—to break the Vanderbilt single-game 3-pointers made record formerly tied by current chief of staff Christina Foggie in 2012 after originally being set in 2005.

With 3:24 left in the fourth quarter, Moore rose up for one final 3 and smashed not only the individual single-game record, but the Commodore team record for 3s made in a game with 17.

“You have goals as a freshman, but you never really imagine yourself doing it until it happens,” Moore said of breaking the record that stood since 2005. “You are kind of like in awe. You really just did something, broke a record that’s probably been here for a long time. So it’s kind of cool.”

The Commodores shot a season-high 31 3-pointers in their 94-42 drubbing of the Hornets, totaling their most points of the year and notching their largest margin of victory of the season in the process. While the records broken were nothing short of astounding, what might be most impressive to Commodore fans about Vanderbilt’s nonconference finale was that they proved their ability to win in many different ways.

Throughout the out-of-conference slate, the Commodores have relied on their defense. They held a ranked Arizona team to 48 points in a close defeat, and bested Rutgers and Saint Joseph’s by holding each to just 40 points. But on Tuesday it was all about offense.

The win over Alabama State capped a nice streak of four straight for the Commodores, during which they bested opponents by an average of 27 points per contest. For context, Vanderbilt has won just five games over the past two years by more than 25 points.

As they prepare to head to College Station, Texas, to battle the Texas A&M Aggies in their first SEC game of the year, they should have a good taste of momentum and a bit of good shooting mojo to boot.

Moore and Brinae Alexander, a pair of Murfreesboro, Tennessee, products, have been the keys to Vanderbilt’s dominant four-game winning streak; the catalysts on offense in every sense of the word.

Entering this season, it was evident that Alexander and fellow senior Jordyn Cambridge were going to have the keys to Ralph’s first offense. Both have produced in different ways, but Alexander’s uptick in scoring of late has been more than noticeable.

The forward has scored in double digits in each of her last six games, a stretch in which the Commodores have gone 5-1. While she had some success early in the year, what has really opened up her game has been a steady dose of 3-point shooting. Over that span of six games, she has gone 18 for 45 (40 percent) from behind the arc en route to 19 points per game.

Before that stretch of games, she had taken just 18 shots from beyond the arc, but now she has tallied five straight games with multiple 3s made. What that has done is not only open up the offense for her to play off the dribble, but it has created more space for slashers like Cambridge and De’Mauri Flournoy to get into the paint and kick to shooters.

And speaking of kicking to shooters, Moore appears to be a damn good one.

I sang the freshman’s praises just a few weeks ago after a couple of really solid performances at the Paradise Jam, but she took her game to an entirely new level during her record-breaking performance on Tuesday night.

She tallied 32 points in her first career start—her ninth double-digit effort of the season—but most notably, she knocked down nine of her 11 attempted 3s. Her 32-point outing is tied for the fourth-most single-game points by a freshman in Commodore history and with it, she is now averaging over 11 points per game, second on the team behind Alexander.

“I told her she was going to stay in until she made it,” head coach Shea Ralph said, laughing after the game. “It’s always exciting to have a game like that where you can set records and get better. It’s fun for the players, it’s certainly fun for Iyana. It’s exciting to watch them be so into it and be so happy when she actually did break the record—we talked about it in one of the huddles and then she didn’t shoot like the next three times she was open. I was like, ‘I shouldn’t have told her’.”

Moore has a terrific blend of 3-point touch with veteran-level patience that has enabled her to both hunt shots but also slash. She has the best 3-point shooting percentage among Commodores with 10 or more attempts, but has also shown an ability to get into the paint off the dribble and score at the rim in transition.

“[We needed] to get a win off of the break going into the SEC,” Moore said. “You need to have that good, positive momentum. And I think tonight, we showed that we can play defense after a break, still be mentally focused, prepared. And I think that’s a good thing that we have as a team.”

Commodore fans should be moore than excited about the 5’8” guard. She is Ralph’s first building block for the future and is going to be a stud on West End for years to come.

While individual scoring efforts have been impressive, the Commodores have continued demonstrating their ability to play team basketball. Aspects of Ralph’s system should refresh basketball purists in an era of hoops that often lacks ball movement and team defense.

Vanderbilt has continued improving offensively thanks to crisper offensive sets and sharing the basketball. After totaling 19 and 15 assists respectively in their last two games, they racked up 24 assists on Tuesday night against Alabama State. Using beautiful skip passes, ball reversals and extra passes, Vanderbilt was able to consistently find the open shooter which in part led to the record-breaking evening.

Take the possession below for example.

Out of the inbounds pass, there is just about everything you want in a possession: five-plus passes, multiple iterations of penetration, a good shot passed up for a better shot and an easy layup deep into the shot clock.

Both Cambridge and Moore slash into the paint, there are multiple reversals of the ball and Sacha Washington finishes an easy layup thanks to an extra pass under the basket from Moore. I’m not sure Vanderbilt had many such possessions all of last season.

Defensively, Vanderbilt continues to play as a unit. Ralph’s Commodores have now forced 20 or more turnovers in nine consecutive games. Cambridge has emerged as one of the best defenders in all of college basketball with eight games of four-plus steals and Ralph has mitigated her team’s biggest weakness—size—by getting each and every player to buy into a system that relies on team rebounding and a stingy zone.

“We talk about every day utilizing that day to get better whether we play games or we’re in practice,” Ralph said after Tuesday’s win. “What’s fun about basketball is playing the team game where you make everyone on your team better. You highlight their strengths, you hide each other’s weaknesses. It’s fun, and it’s also a really great way to be a good team. So going into SEC play I’m excited that today I think we did that.”

Combine an offense that is clicking using the long-ball and crisp ball movement with a defense that is top 40 in the nation in turnovers forced per game, and Vanderbilt could scare a number of conference foes come this January.

Sound familiar? Well, it’s just about exactly what football coach Clark Lea preached all fall during his own inaugural season.

Vanderbilt is set to embark on a grueling SEC slate that, currently, includes eight games against ranked opponents. Six SEC teams are in the AP Top 25, but Vanderbilt only plays one of those teams in its first four conference matchups.

A matchup with No. 23 Texas A&M will be Ralph’s first taste of conference play. The Aggies will be more than a challenge for her group as they bested Depaul, a team Vanderbilt lost to at the Paradise Jam after having a big lead, by double digits. So how will Ralph and company measure success this SEC season?

“I don’t want our team’s confidence to come from our performance,” Ralph said. “I want it to come from what I just told you guys I think is important: making everybody better on and off the basketball court, who you are every single day, no matter what happens on the scoreboard.”

Again, sounds very much like Lea. Both programs were at near rock bottoms when the two first-year head coaches took over. Wins can’t necessarily be the barometer. Improvement and competing in tough games can be.

With Vanderbilt’s brand of basketball, they should give themselves a chance most nights. By using swarming defense, the Commodores should be a team most SEC opponents have no interest in playing.

One of the biggest keys to doing so, however, will be navigating the tricky COVID-19 landscape that is currently plaguing major sports in the United States. On Tuesday, Vanderbilt was without Flournoy and sophomore Bella LaChance due to health and safety protocols—Ralph had just nine available players against the Hornets despite her entire team being fully vaccinated.

After No. 23 Texas A&M on Thursday, Vanderbilt has a trio of unranked conference opponents in its first four SEC games. There are chances for this team to jump out ahead of the big dogs in the SEC and by staying healthy, they might just be able to do so.