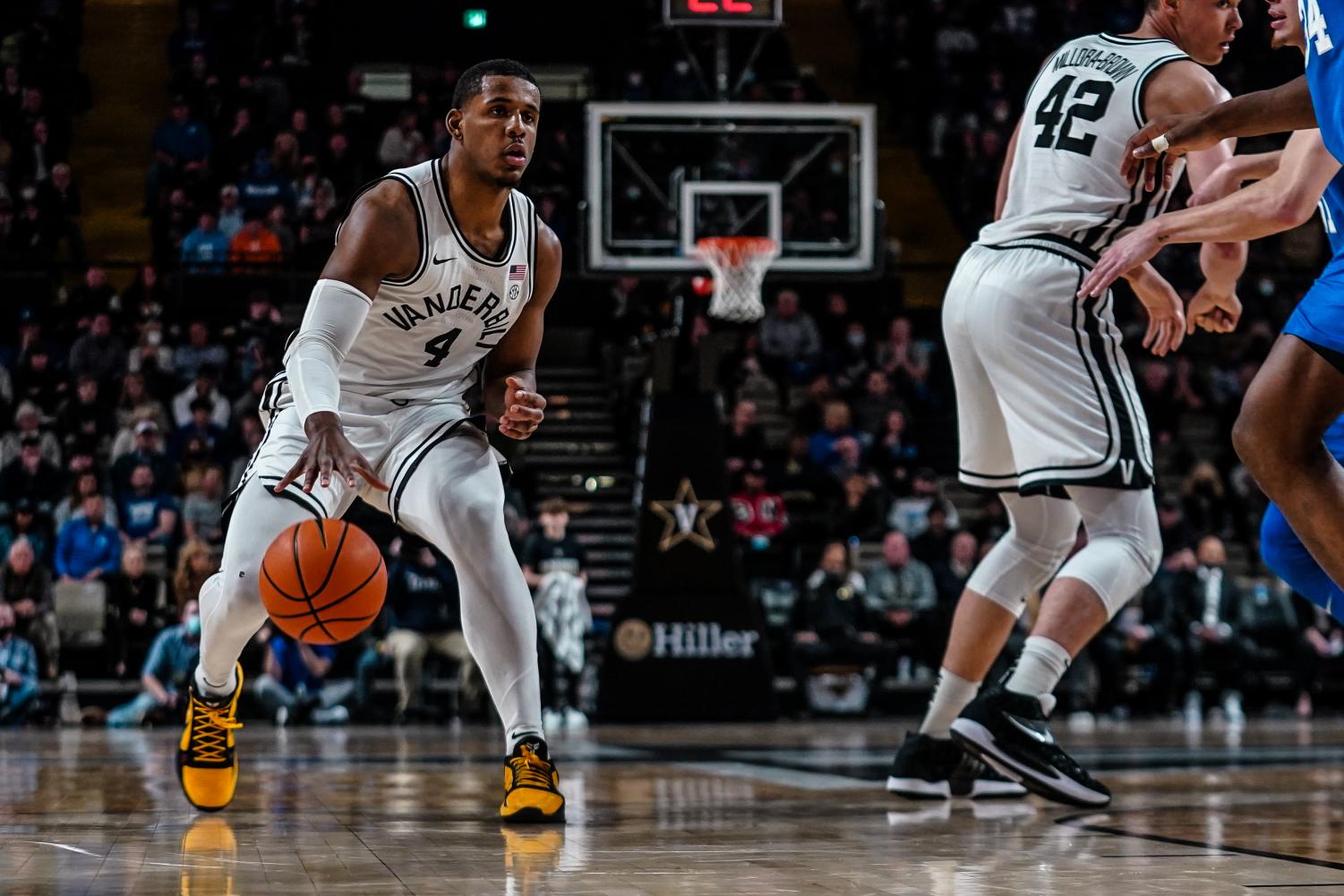 Following two of the biggest wins of the Stackhouse era, Vanderbilt’s momentum was halted by a beatable South Carolina team, Oscar Tshiebwe and way too much Big Blue in Memorial Gymnasium.

Just one week ago, the Vanderbilt Commodores were coming off of their first four-game winning streak under Jerry Stackhouse’s watch. A pair of impressive victories over BYU and Arkansas coupled with easy wins against Austin Peay and Hawai’i had the Commodores in a wonderful position with a weaker South Carolina team coming to Nashville.

Ever heard of a trap game?

The Gamecocks are one of the few teams in the SEC this season that Vanderbilt will hold a talent advantage over. But with a perfect combination of external factors, the Commodores were taken down, 72-70 on their home court.

The 11 a.m. tipoff wasn’t ideal. A big-win hangover certainly was present. Looking past the Gamecocks with No. 18 Kentucky on deck probably was a concern. And no students in the building certainly didn’t help.

As frustrating as the game was for 39 minutes, the Commodores had a chance up until the very end. With six seconds remaining and possession of the ball, Vanderbilt was unable to even get a shot off despite consecutive timeouts from the teams that provided plenty of time to draw up a play.

What Stackhouse did draw up was a Scotty Pippen Jr. drive and kick to Trey Thomas—who entered the final possession 0-of-4 from the field for the game. What ensued was reminiscent of Vanderbilt’s final play last year at home against Mississippi State on almost the exact same day: a turnover.

“We tried to get a late look for Trey to win the game,” Stackhouse said after the loss. “It was not executed well because of the time and [how they jammed Pippen Jr. off the inbounds] but it probably wasn’t the right call.”

Next up for the Commodores was a date with Oscar Tshiebwe and Kentucky, a 78-66 loss for the Commodores. Needless to say, after the big man dropped 30 points and grabbed 13 rebounds against the Black and Gold, Vanderbilt wishes there wasn’t a second date scheduled for Feb. 2.

The Commodores and Wildcats duked it out on national television on Tuesday with ESPN analyst Jay Bilas on the call. In his words fans should, “assume Oscar Tshiebwe is always open.”

That’s about how the Wildcats operated for the entire first half against a far too conventional Commodore defensive approach. But for a 20-4 Vanderbilt run late in garbage time, this one was a blowout. The Wildcats averaged a very efficient 1.2 points per possession and provided no resistance at all to Tshiebwe on the interior. The Commodores were sped up by the play of the Wildcats, and the Gamecocks days before, struggling to get back on defense and not registering any easy advantages in transition themselves.

The Commodores never sent doubles on Tshiebwe, who leads the nation in rebounding and has 30 pounds on Quentin Millora-Brown, and they were punished for it. As shown, Tshiebwe had both time and space to operate. He got exactly to his spots and was never made uncomfortable.

Trey Thomas even got caught on the big man at times via switches—perhaps the largest man-on-man size differential of the year in college basketball—and Jamaine Mann, while trying to be physical, was easily dominated as well.

For perhaps the first time this season, Millora-Brown was severely overmatched, and the Commodores desperately missed the presence of Liam Robbins, who would have been able to match Tshiebwe in size and stretch the floor on the other end.

Vanderbilt also missed Rodney Chatman who is now nursing a “pretty serious” hamstring injury, according to Stackhouse. Even without their lead guard Sahvir Wheeler, freshman TyTyWashington Jr.—Chatman’s likely assignment—racked up 15 points and four assists. He and Tshiebwe, who are the Wildcats’ best two players, totaled Kentucky’s first 17 points on 8-of-9 shooting.

The Commodores did almost nothing unique to make life difficult on the Wildcat stars and with their second straight loss, set up an absolute must-win on the road against one of the worst SEC teams in recent memory, Georgia, this weekend.

When push comes to shove on the hardwood, regardless of size, scheme or preparedness, the team that makes the most plays often prevails. And against Arkansas in their SEC opener, that’s just what the Commodores did.

Pippen Jr. came up with a clutch turnaround with two minutes left to put Vanderbilt up four. Chatman stepped up with 11 second-half points, including a crucial 3-pointer with 40 seconds left. And Myles Stute came up with a huge block to prevent a potential overtime. Multiple guys made plays.

Fast forward to Saturday against South Carolina and Vanderbilt missed 10 free throws—including a potential game-tying attempt—turned the ball over a season-high 19 times—including on the final possession—and got just 11 points on 3-of-11 shooting from its bench.

“We just need performances. In a big game like tonight, you need to have guys step up and make plays. I thought we had a couple guys step up—Scotty played well, Trey [Thomas] played well for us—but for us, we need that third scorer consistently,” Stackhouse said after his team’s loss to Kentucky. “Jordan Wright is in a funk right now. We have to try to do something to shake him out of that.”

Finding alternative playmakers has certainly been a challenge for the head man this year. Pippen Jr. was used on a whopping 35% of Commodore possessions last season, good for third in the nation, but this year, he wanted that to change so that Vanderbilt could boast a more well-rounded attack.

Through three conference games, Pippen Jr. leads the SEC with a ridiculous 37% usage rate. He is taking 31% of Vanderbilt’s total shots during that stretch and getting absolutely no help along the way. On Tuesday, he was forced into a season-high 45% usage rate en route to 32 points because, well, there was nowhere else remotely productive for the ball to go.

Earlier this year, Pippen Jr.’s usage hovered around 29% for quite a while. But those days are long over largely because of Jordan Wright’s recent ineffectiveness, injuries to Robbins and Chatman and inconsistency from role players like Myles Stute and Trey Thomas.

Vanderbilt has never won a conference game under Jerry Stackhouse with fewer than three players in double figures and right now, they only have one that they can count on for 10-plus.

Wright’s slump is a peculiar case that seems to have even befuddled Stackhouse. The talented junior has seen his scoring average fall from 19 to less than 12 in just a matter of weeks. He has scored under 10 in six of Vanderbilt’s last 11 games and reached a new rock bottom against Kentucky, tallying zero points in just 20 minutes of play.

Nothing has been going right—for lack of a better word—for the Louisiana native, and much of that comes back to decision making.

Not only is he letting the ball stick in his hands, but he is playing into defenses who are trying to speed the Commodores up. He’s leaving his feet for floaters and drawing lots of offensive fouls—as seen below. He’s passing up good shots in favor of long mid-range 2s, he’s losing the ball while dribbling and he simply isn’t shooting enough at just nine shots per game over his last six.

His best stretch of play in the past couple weeks came against BYU in Hawai’i at the beginning of the second half. Stackhouse wisely called consecutive sets for him to get smaller defenders on his back and work in the post. He promptly sparked an 8-0 run that paved the way for a Commodore win.

Getting players out of slumps is a give-and-take and Stackhouse needs to put his forward in good positions to figure things out if Vanderbilt wants to fight for an NIT berth. But to bluntly paraphrase the head coach’s words, if he doesn’t figure it out, he might find the bench.

As “Black – Gold” chants attempted to ring out inside Memorial on Tuesday, they were overtaken by a much more powerful rendition of “Blue – White” from the Kentucky fans that made their way to West End for the midweek matinee. This was hardly a home game for Vanderbilt.

Opposing SEC fans flooding Vanderbilt stadiums and gyms is not a new phenomenon, but Tuesday’s game had a different feel to it. Attendance was listed at just over 8,000 fans—less than 60% full for a Vanderbilt-Kentucky game. Imagine that.

Interpret this as you will, but my interpretation is two-fold: the Commodores feel comfortable playing in big games against ranked opponents and they are also used to Memorial Gymnasium not feeling like home.

On a virtual town hall for students Tuesday evening, Dean of Students G.L. Black responded to a question about the seemingly contradicting attendance policies for the general public and students by saying, “the focus is internally on our Vanderbilt community to ensure we can stay open and fully operational.”

Students were restricted from attending but were offered a Zoom link to stream Red Panda’s halftime performance, as Black explained that more “virtual engagement” is on the way for the next few basketball games. Virtual engagement certainly won’t help when No. 22 Tennessee comes to town on Tuesday.

Nonetheless, blame should not be reserved only for Vanderbilt leadership. The student section was riddled with blue despite Vanderbilt season ticket holders and Black and Gold Club members being the only ones offered those tickets.

Tshiebwe offered some thoughts on Memorial Gymnasium’s atmosphere after the game in a fashion that can only be described as unfittingly endearing given his dominant stature on the hardwood. Yet it perfectly sums up the symbiotic relationship between teams and fans that Vanderbilt was lacking this week in its pair of SEC losses.

“We have to do whatever we can do for [our fans] because without them we can’t do anything. Like today, that gym was packed. I thought this gym was going to be packed with Vandy fans, but no Vandy, our fans,” he said graciously. “If they have sacrificed everything to follow us wherever we go, we have to do something for them.”