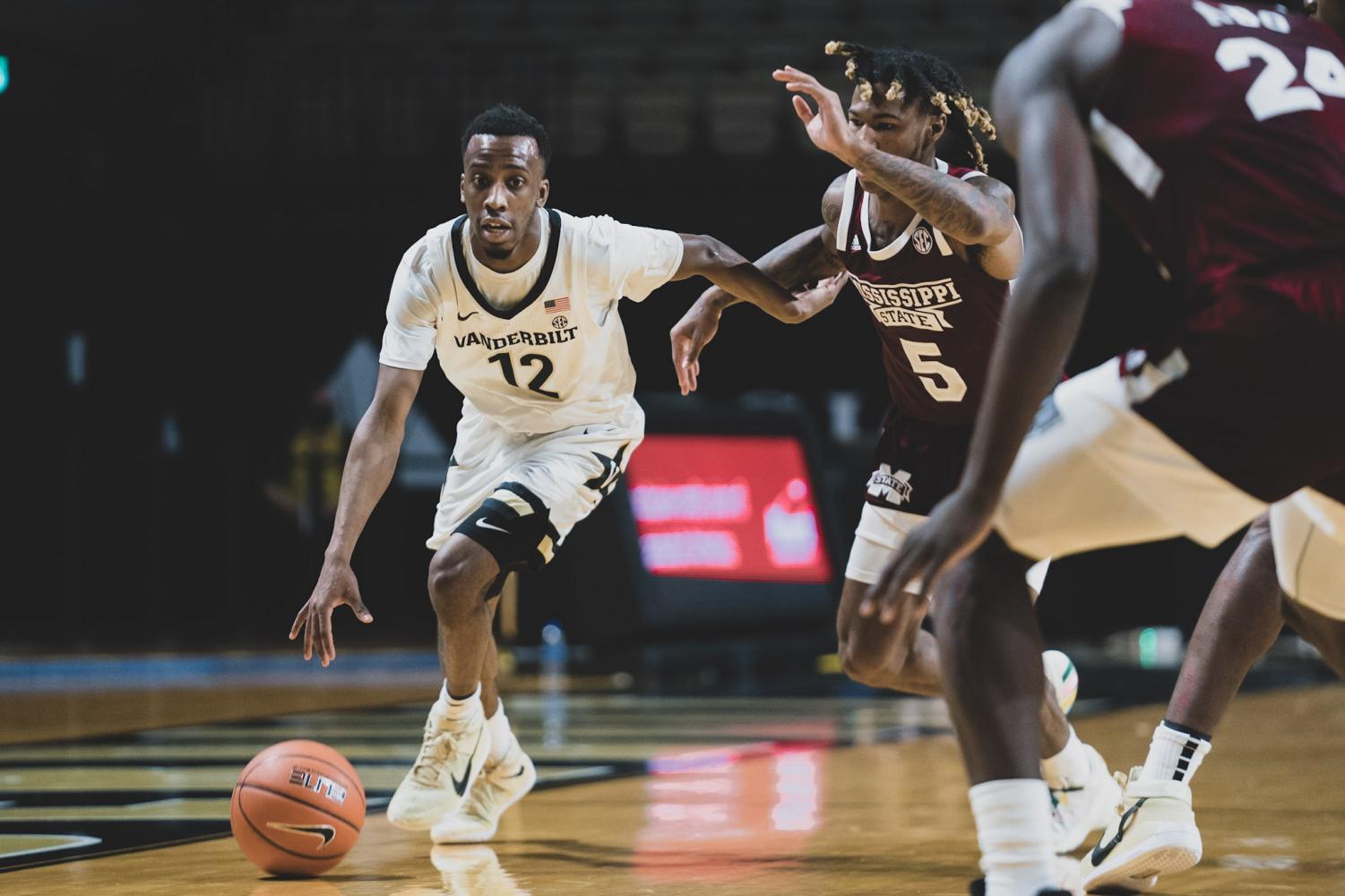 After an ugly loss to Florida, Vanderbilt suffered through two heartbreaking defeats that epitomized what it means to be a Commodore basketball fan.

Pain has become synonymous with Vanderbilt men’s basketball over the past three years and Vanderbilt’s first three Southeastern Conference (SEC) games of the 2020-21 season were no different.

The Commodores began their conference slate with a blowout loss to the Florida Gators on Dec. 30. But in their next two contests, Jerry Stackhouse’s team fought tooth and nail for 39 minutes and gave themselves chances to beat two worthy opponents: Kentucky and Mississippi State.

Then, in what has become the norm for this team, the ball didn’t bounce their way and the Commodores lost two heartbreakers, bringing their record to 4-5 (0-3).

First it was a triple-doink three point attempt off the hands of Max Evans on Tuesday against Kentucky. Despite three long bounces on the rim, the game-tying bid fell short, and Evans was unable to pull off a Kawhi Leonard-esque crunch time shot.

Then on Saturday, following a made free throw from Mississippi State’s Jalen Johnson that put the Bulldogs up 83-81, Stackhouse implemented an inbounds play to potentially tie—or even win—the afternoon matinee.

The play called for Scotty Pippen Jr. to inbound the ball, receive a pass back and drive the length of the floor to find a shot. But as he received the pass back from Dylan Disu, Mississippi State’s Cameron Matthews got his hand on the ball, and it bounced off the floor right into his waiting arms.

“We need a break, that’s all it is,” Stackhouse said after his team’s third conference loss on Saturday. “We had a nice set, but a guy reached his hand out there and got his hands on the ball.”

If you want to relive the pain, subject yourself to the 17 seconds below. It will disappoint.

Despite the heartbreak, this team has improved. Seven losses of five points or less since 2018 make that fact difficult to acknowledge, but the Commodores continue to show promise.

After ugly losses to Richmond and Davidson, Vanderbilt lacked identity. But through a resurgence in three-point shooting and outstanding play from its sophomores, the Commodores are trending in the right direction as the heart of their season looms.

Although the streak ended just under one year ago, the Jerry Stackhouse-led Commodores have begun a new streak: in every game since that fateful 0-25 shooting night, the Commodores have made at least four three pointers.

Yes, this streak has lasted just 24 games thus far, but it is a crucial part of Vanderbilt’s, albeit little, success.

Entering conference play, Vanderbilt was 57-171 from beyond the three-point line, a modest 33%. But when forwards DJ Harvey, Myles Stute, and Jordan Wright returned from COVID-19 complications, that number ballooned.

In three conference matchups, Vanderbilt is shooting an astounding 33-80 (41%) from three-point range. The Commodores are shooting with confidence and creating space for Pippen Jr. to attack the rim. And although 41% from three is most likely unsustainable, it’s no fluke; it demonstrates the Commodores’ improvement in execution.

Without the firepower of Aaron Nesmith, I was skeptical of whether Stackhouse’s three-point shooting offense would fit the skill set of this year’s team. And throughout the non-conference schedule, it appeared I was correct.

Out of the gates, Vanderbilt was unable to create space for quality three-point attempts and the complicated nature of Stackhouse’s offense was triggering stagnant ball movement and a plethora of execution errors.

However as this group has developed chemistry, they have found plenty of open looks, most notably off the hands of Stute and Trey Thomas, who are a combined 17-33 (52%) from long range in three SEC games.

But with a heavy dose of three point attempts comes a streakiness that can be frustrating. The Commodores ended their loss to Mississippi State on a five of seven spurt, but just minutes earlier, they dragged through a 4:06 scoring drought.

In these shooting lulls, Vanderbilt has to find a steady dose of offense via transition scoring and offensive rebounding. Despite nine offensive rebounds on Saturday, the Commodores failed to convert a single second chance point. They also registered just five fastbreak points.

“Everybody comes into this damn building to make shots, we gotta figure that out. Obviously it’s a shooter’s gym for everybody but us,” Stackhouse said after the loss to Mississippi State.

The Bulldogs did indeed shoot an incredible 61% from the field, but there is a deeper theme to his team giving up 84 points per game in the SEC, and it has nothing to do with the walls of Memorial Gymnasium.

Mississippi State shot so well because they found shots they are quite capable of and accustomed to making. Vanderbilt consistently allowed Bulldog guards Iverson Molinar and DJ Stewart Jr. to get in the paint and find their spots. They made some difficult shots, but the Bulldogs did exactly what the Commodores should have expected them to do.

Mississippi State only attempted seven three pointers the entire game, and most of their damage was done in the mid-range and out of pick-and-rolls, two things Stackhouse talked about in his press conference on Friday before the game.

Attributing losses to made shots by the other team should not be the explanation. Teams do not just shoot 61% from the field without help from an opposing defense.

In fairness to Stackhouse, he did address these defensive errors postgame, explaining that Vanderbilt big men were not nearly aggressive enough defending Bulldog pick-and-rolls.

“Some of our traps were a little bit soft to the point where they were able to get around them, split them,” Stackhouse said. “The bigs weren’t up to the level where we wanted them to be, I think that might have been a little bit of fatigue.”

The Commodores’ two best defenders, Max Evans and Clevon Brown, have been unable to get into a rhythm yet this season. Evans has shot the ball poorly and that has bled into his ability to lock in on defense. Meanwhile, Brown has been battling a groin injury.

But with Brown expected to be back this week, it is imperative that Stackhouse gets his two defensive stoppers rolling. The Commodores have now surrendered 116 points in the paint in their three SEC losses, and bigger teams such as Tennessee and LSU are on the horizon.

There are plenty of games to play. But the question that loomed over the heads of all Vanderbilt fans entering last season appears to be resurfacing again this season. 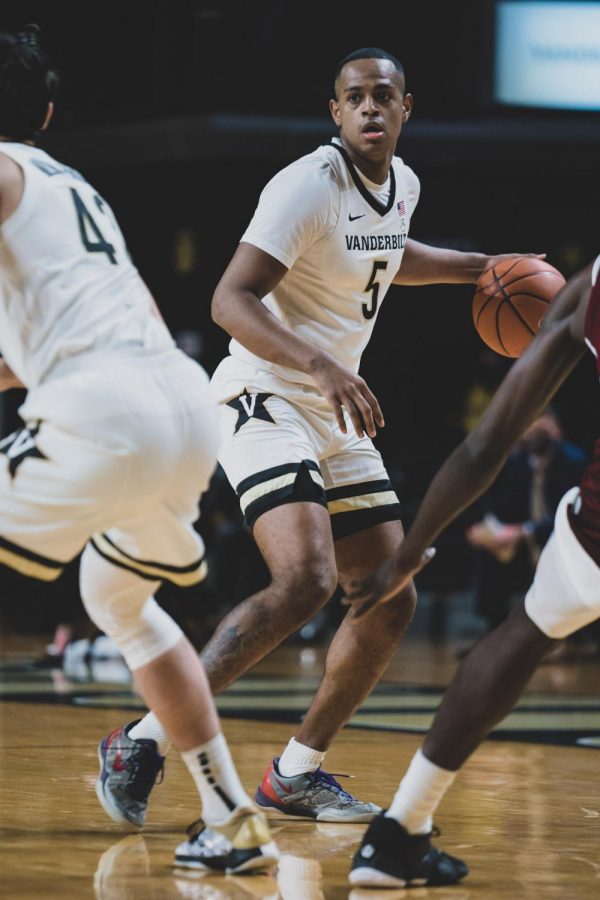 Drew’s 2018-19 team may actually have been more athletic. But this year’s team executes in a way his teams never did. The precision with which offensive sets are run is not reminiscent of the 2018-19 Commodores and the grit with which players such as Disu and Thomas play will push this team to a victory.

The SEC is also considerably worse this year than in 2018-19, with only two teams currently ranked in the AP top 25 poll. The Commodores still have matchups with Texas A&M, Auburn and Georgia, all of which rank outside of the KenPom top 80.

The road will not get immediately easier, however. The SEC announced Saturday that Vanderbilt would play No. 9 Tennessee on Tuesday rather than No. 13 Missouri as the Tigers continue to be on pause due to COVID-19 protocols.

The Commodores will then travel to Knoxville for the second of back-to-back games against the Volunteers on Jan. 16.

Regardless of the Commodores’ upcoming schedule, this team will find conference wins. And if they continue their hot shooting and commit themselves to effort on defense, it may come sooner rather than later.

The Vanderbilt Hustler welcomes and encourages readers to engage with content and express opinions through the comments section on our website and social media platforms. However, The Hustler reserves the right to remove comments that violate the outlined policy. Comments which contain vulgarity, hate speech, personal attacks or appear to be spam or commercial promotion will be blocked or removed by The Hustler. The comments section, both on the website and social media, is moderated by the Editor in Chief.
All The Vanderbilt Hustler Picks Reader Picks Sort: Newest
Subscribe
Login
1 Comment
Newest
Oldest Most Voted
Inline Feedbacks
View all comments
L
Larry