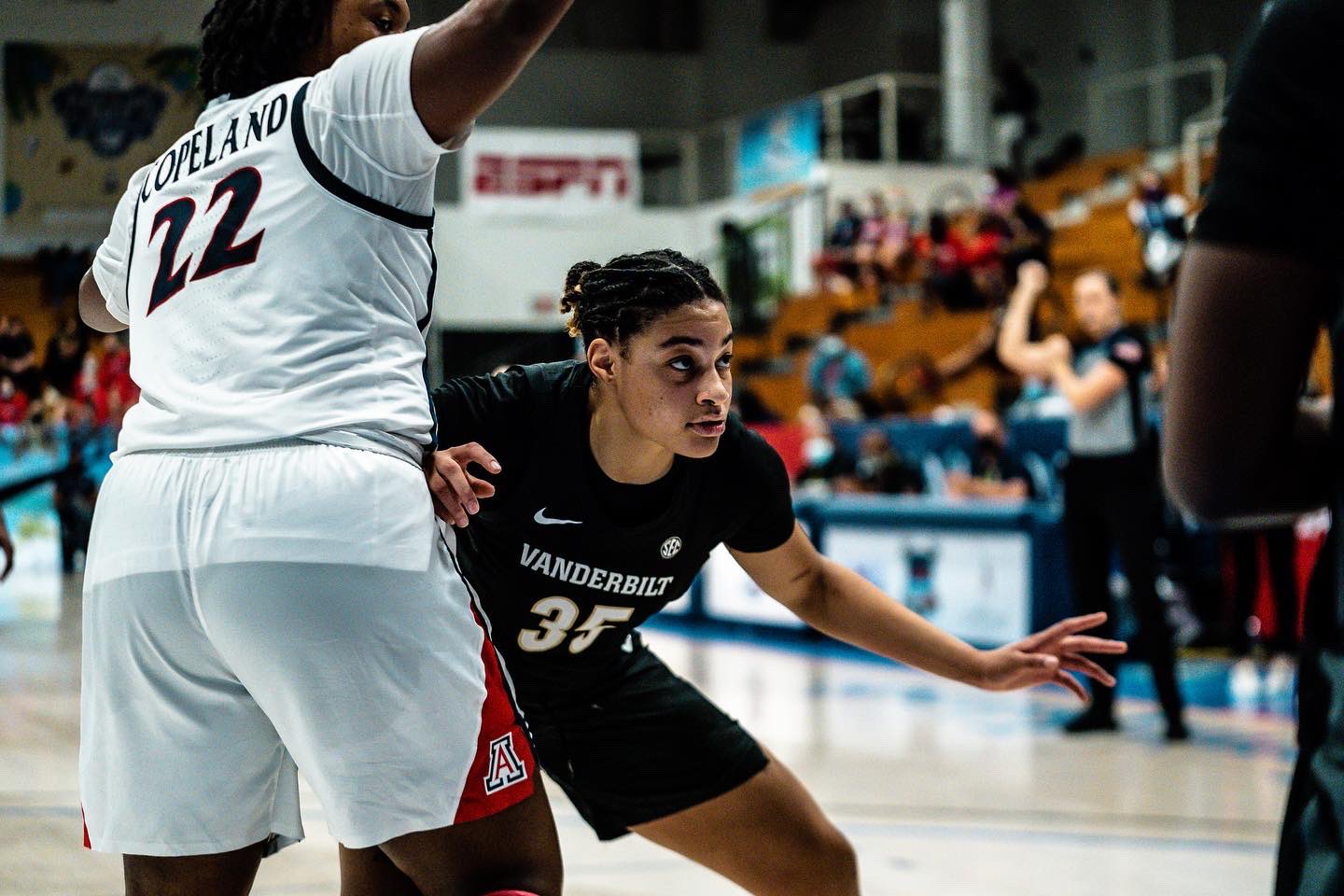 Vanderbilt guard Jordyn Cambridge was nothing short of excellent in the Commodores’ trip to the Paradise Jam, but the impressive play of a number of underclassmen stole the show.

When Shea Ralph took over the Vanderbilt women’s basketball program, her immediate results were sure to be unclear. Among a slew of transfers and turnover on the roster, the Commodores lacked lead scoring options and an identity. But in just a few short months—and eight quick games—this squad has already begun showing why other teams will dread playing them.

This past holiday weekend was a chance for Ralph and company to burst on to the national scene, as she and the Commodores traveled to the U.S. Virgin Islands for a trio of games at the preseason Paradise Jam tournament. Not only did Vanderbilt re-enter the U.S. after claiming their first non-SEC Power Five victory since Dec. 21, 2019, but they also did so after pushing No. 9 Arizona to the brink of upset and forcing an insane 75 turnovers over the three-day tournament.

“For our team, pretty much all year it has been our defense,” head coach Shea Ralph said after her team upset Rutgers. “We know that no matter what happens on the offensive end of the floor, we can always bring energy, effort and communication on the defensive end. So everything starts and ends there for us.”

Thanks to an all-tournament couple of days from guard Jordyn Cambridge—a set of performances that saw her average four steals per game—and a number of quality showings from their underclassmen, the Commodores demonstrated on national television that Vanderbilt women’s basketball is back on the rise.

“We don’t do moral victories but what we are doing is growing up,” Ralph said after a narrow, 69-61 loss to No. 9 Arizona. “We saw today that when we stay together and we compete and play hard and do all the things that we talked about doing, we can actually win any of these games that we play.”

Last week, Bryce Smith wrote that we would know a lot more about this team after the Paradise Jam. And we certainly do. We learned about this team’s identity—defense—and that Shea Ralph is going to be one hell of a head coach.

The highlight of the weekend was undoubtedly an inspiring performance in game two of the tournament: a 51-40 Vanderbilt win over a formerly 4-2 Rutgers team. This game was no shootout—the team’s combined to hit on just 35 percent of shots from the field—but stifling defense told the story and got Vanderbilt the win.

That defense started with Cambridge, who racked up a ridiculous six steals on the day. The Nashville product averaged 2.8 steals per contest in 2019-20 and is currently on pace to top that total, as she’s currently totaling three swipes per game.

The Commodores employed an extended 2-3 zone for much of the weekend and with the lengthy presences of Brinae Alexander and Demi Washington on the wing, Cambridge was free to be aggressive up top.

The key to a good zone is always rebounding out of it and against Rutgers, the Commodores did a good job of that early on as they built their lead.

Following a heartbreaking loss to Arizona, this victory solidified the fact that Vanderbilt, when it plays to its potential,can compete with just about anyone. Vanderbilt teams of the past would certainly not have been able to go into a neutral site game against a top-10 opponent and push them to the brink. This squad did. Not only did they overcome their lack of go-to scoring options and depth to challenge Arizona, but they then beat Rutgers.

Ralph has already shown that she is of the rare breed of coaches that can get more out of a team than they should be capable of. Her team outplayed even what many thought was possible and displayed its identity as a defensive stalwart that will take advantage when opponents make mistakes.

As well as the players performed, this tournament was tremendously coached. Since day one, Ralph has said that she is not going to employ a system that doesn’t benefit the players she has inherited. Case in point: she knows this team doesn’t have great 3-point shooting, and she hasn’t tried to make them into shooters. But defense can be played by anyone, and she has sculpted a defensive scheme that wonderfully fits this squad. And they are buying in.

As good as Cambridge was all weekend long, a trio of freshmen largely stole the show for the Commodores this weekend—all off the bench.

Iyana Moore, Sacha Washington and De’Mauri Flournoy began showing why the future of Vanderbilt women’s basketball is in good hands. All three balled out.

Washington has proven to be one of the Commodores most reliable forces on the interior in the early going. In three games this weekend, she totaled a combined plus-25 in the box score—tallying a positive individual plus-minus in all three games despite two losses for the team. She displayed skill with the ball around the rim, took at least three charges over the course of the tournament and notched an impressive double-double on Saturday against Depaul.

Flournoy and Moore, while a bit more erratic with the ball, have also stepped into an incredibly important role off of Ralph’s bench. Both were highly touted recruits, and they have shown why. They both have scoring savvy, can launch it from deep and can handle. With Cambridge off the floor, they largely took on primary ball-handling responsibilities—a big ask for true freshmen.

While they did turn the ball over a number of times, the clips above are a testament to what they are capable of. Both are incredibly smooth off the dribble and like to get out and run the break, which will seemingly be a hallmark of Ralph’s defensive-minded scheme.

Individually, Moore has the ability to knock down shots from just about anywhere on the court using her balanced side steps and crossovers. She went 8 for 15 from beyond the arc over the course of the tournament and showed that she can use her frame to get where she needs to go on the court. After a solid couple days in paradise, she has now scored in double figures in four out of her last five games, an impressive feat for an underclassman.

Flournoy has a bit of work to do on her handle—she got a bit careless especially in the Arizona game as she tallied four turnovers in just 16 minutes. But she has a quickness and a shiftiness that will help her mature into a nice floor general moving forward.

This trio of freshmen has shown that they can be winning players for this program right now. As important as their future development will be, experience in high profile tournaments against Power Five teams is nothing but positive, regardless of the outcomes or results. Don’t be surprised if Washington and Moore crack the starting lineup in the not too distant future.

The lowest point of the weekend for the Commodores came in a second-half blowout to Depaul in the tournament’s final half. While a lot of things can be attributed to Vanderbilt’s collapse, certainly three games in three days had something to do with it.

Depaul jumped on the Commodores, outsourcing them 54-30 in the final two quarters. Vanderbilt was able to tally just eight points in the third quarter thanks to 2-of-13 shooting from the field.

Thankfully for Ralph and her team, the hangover from that loss won’t last long as the Commodores are set to face off with Chattanooga tonight.

Vanderbilt should have a few key priorities moving into the stretch run of nonconference play. First, they will need to continue honing their defense. Vanderbilt is currently holding opponents to just 59.6 points, fifth among SEC teams thus far. Second will be finding ways to get shooters like Brylee Bartram and Kendall Cheesman hot from beyond the arc. The two combined to go just 1 for 9 from deep this weekend, and to win a tough game on the road against Kansas or games later in their SEC slate, some 3-point shot production will be critical.

Uncertainty and a lack of consistency still surrounds this team, there is no doubt about that. Ralph and the Commodores demonstrated that they are capable of competing with just about anyone this past weekend in the Virgin Islands, but they also showed that they are vulnerable to turnovers and missed shots in their second-half meltdown to Depaul.

Consistency will be a priority moving forward, but the growth shown in just eight games is simply impressive.

“I was happy for our team today because when I was watching them out there playing like that, you saw that they believe that too. So in that way, our team is growing and actually becoming a team,” Ralph said after the loss to Arizona. “In the win-loss column this shows up as a loss but I don’t think that we lost. I think today Arizona had to beat us and those are two very different things. We found out a lot about ourselves. I think we matured and grew up a lot today and I’m just excited to continue to do that with our team.”