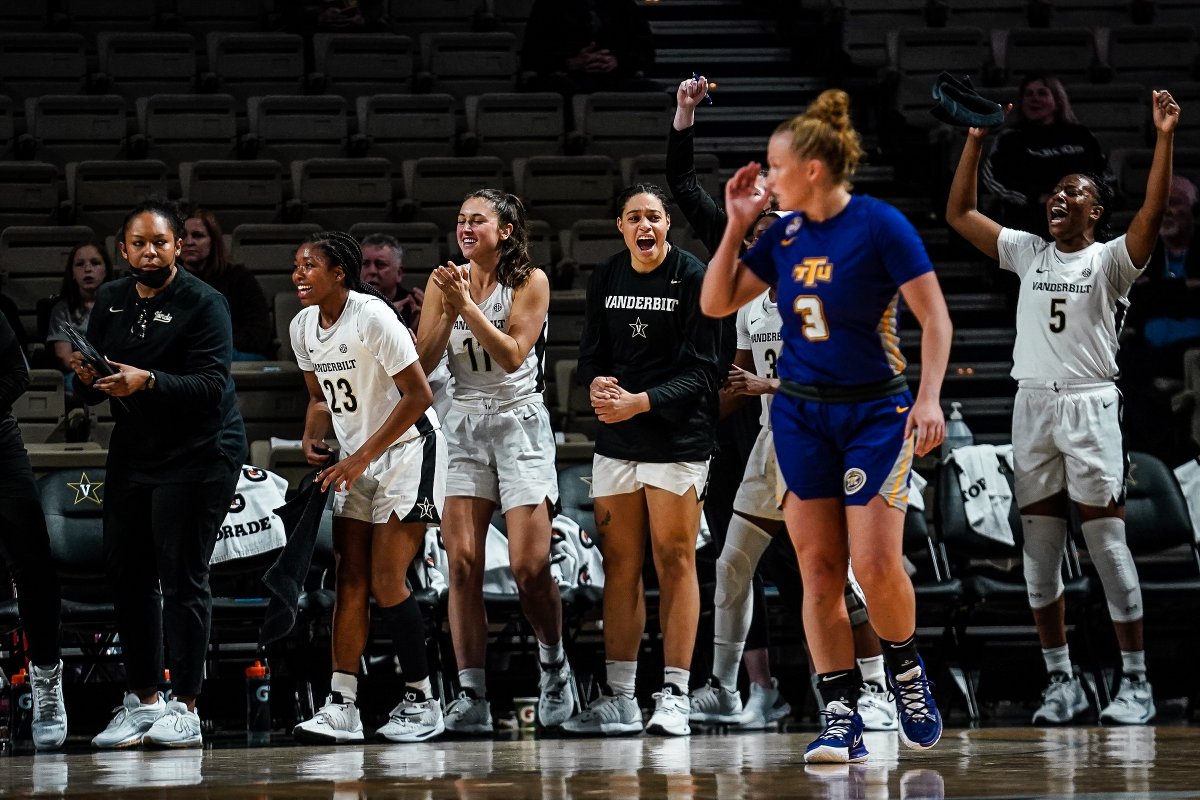 Memorial Minutes: Some good, some bad

After a satisfactory opening night victory, Shea Ralph and crew took a number of bumps in the road following losses to Little Rock and Middle Tennessee State, but bounced back on Thursday night.

Vanderbilt women’s basketball head coach Shea Ralph has said and done all the right things thus far. From bringing in former members of her legendary UConn squads into practice to reeling in a pair of top-100 recruits to West End, it has been a good start to the new skipper’s tenure in Nashville.

That doesn’t necessarily equate to a bunch of wins. At least not yet.

But Vanderbilt managed to remain .500 through its opening four games. They were impressive in two home victories over Gardner-Webb and Tennessee Tech. And while those contests were sandwiched by ugly performances against Little Rock and Middle Tennessee, this is a team that is nothing if not growing. In year one of the Ralph era, that’s really all you can ask. Certainly a 2-2 start against a slate full of mid-majors isn’t the most thrilling, but keep in mind again Ralph is just getting started. It was never going to be easy.

So yes, there was some good. And there was definitely some bad. But overall, it was an encouraging week. Ralph has injected a rejuvenated energy into a dormant program and the beginning pillars of her culture are being set. So what should fans take away from the first chunk of the Commodores’ schedule? Progress.

Ralph has many times mentioned the importance of team-building in establishing her program early on, and the cohesion of this team has been evident. Even from the crow’s nest it is clear that this team has a great affinity for each other and is undoubtedly playing hard for Ralph and her staff.

One source of energy has been the infusion of young freshmen talent that has flashed thus far this season. On Thursday night against Tennessee Tech, De’Mauri Flournoy broke out in a big way, leading the team in scoring with 14 points in the 75-55 win. The 14 points were a career high and also the first points of her college career. A four-star prospect out of Georgia, Flournoy flashed a smooth-stroked, impressive long-ball, as she shot 4 for 5 from deep against the Golden Eagles.

Flournoy catalyzed the Commodore offense and dumped in 11 of her 15 points in the 41-point second half effort—the most Vanderbilt has scored in a half this season. If Flourney can continue to be a long-range option for Ralph, that would be a big boost for a team in search of consistent scoring options.

Elsewhere, Iyana Moore contributed a season-high 12 points against Tennessee Tech as well and showcased a solid mid-range jumper in the process. She added eight points in the loss to Little Rock and has played 20-plus minutes in each of the Commodores last three games.

Kendall Cheesman was the star of the show in the team’s season opener after scoring 10 points while shooting 2 for 3 from deep. And last, but not least, Sacha Washington—a top-100 recruit—has shown flashes of being the interior presence that Vanderbilt so desperately needs. Standing 6’2”, Washington has displayed an ability to clean up the offensive glass and get putbacks and figures to get more comfortable each and every game.

“They [the freshmen] have made enormous strides. Freshmen have a lot to learn. Right now, we’re battling some inconsistency in practice and we talk a lot about how the way we train is usually what we’re going to see in games,” Ralph said when on the development of her newest Commodores over the first two weeks of the season. “We have to continue to work to make that more consistent so we know what we’re going to get from them in the game. Now we know what they’re capable of—it’s about going in there and giving it to us.”

These freshmen are the future of Ralph’s program and if they can continue to get better and contribute throughout this season, that’s a big development for Vanderbilt. Right now, it is probably the number one thing to monitor on the young campaign.

Now, for the bad. The first sour note of the Shea Ralph era was sustained last Friday night after the Commodores were drubbed at home in embarrassing fashion by Little Rock, 56-40. Brylee Bartam led the way, scoring 11 of the team’s 40 points.

“We are still learning about our team, learning about ourselves, learning how to be consistent at everything that we do. Obviously, 40 points is just not good enough,” Ralph said after the game. “I have to find a way to put them in better positions to be successful.”

The outing represented the fears that most have surrounding the 2021-22 rendition of the Commodores: that this team lacks the veteran talent and depth to compete in the SEC, let alone in the non-conference.

Simply put, Stephanie White left behind a rebuild in every sense of the word. The most obvious hole: the lack of a proven, upperclassmen scorer after the departures of Koi Love, Chelsie Hall and Enna Pehadizic from a year ago. Even in the miserable, shortened 2020-21 season, Vanderbilt’s lowest scoring output was 43 points and that was against No. 4 South Carolina.

Against Little Rock, the Commodores combined to shoot a putrid 32.7 percent from the field, making just 16 field goals in total for the night. They fared no better from 3-point land—going 5 for 22 en route to a 22-percent shooting from deep. After leading the squad in scoring in the opener against Gardner-Webb, Brinae Alexander shot just six times Friday night in 32 minutes of game action.

The balanced scoring effort that saw five Commodores in double figures en route to a win over Bulldogs of Gardner-Webb dissipated as Ralph and company limped to 40 points against Little Rock, then mustered just 46 points against Middle Tennessee State on the road. They finished 15 for 49 from the field (“good” enough for a 30.6-percent field goal percentage) against the Blue Raiders and also hit just two threes.

One big reason for that lack of scoring: turnovers. The Commodores opened up the season recording 20-plus turnovers in each of their first three games. Not even getting a chance to get a shot on the rim is a less than ideal offensive strategy and Ralph knows that. It is something that she noticed as an improvement in the win over Tennessee Tech.

“Our shot selection was better. We had less turnovers and made more 3-point shots. The team was more in rhythm than the last couple of games,” Ralph said in the postgame presser.

Consistency will be a key piece moving forward. The question becomes—which Commodore team is going to show up? Or is the concept and identity of this team still in the formulation process?

Vanderbilt will have a final tune-up on Sunday afternoon against Jacksonville State at 2 p.m. CST. Then, it’s off to the Paradise Jam in the US Virgin Islands, where the competition will stiffen. Over a three-day span, the Commodores will face Arizona, Rutgers and DePaul, three high-major (and high quality) opponents before Thanksgiving. Arizona features former Commodore guard Koi Love. Both Rutgers and DePaul posted 14 wins on the 2020-21 campaign.

Continuing to find scoring and maintaining solid defense will be key for the Commodores in Ralph’s first tests against Power Five opponents. Regardless, by the time the next Memorial Minutes is released, we’ll likely know much more about this team.