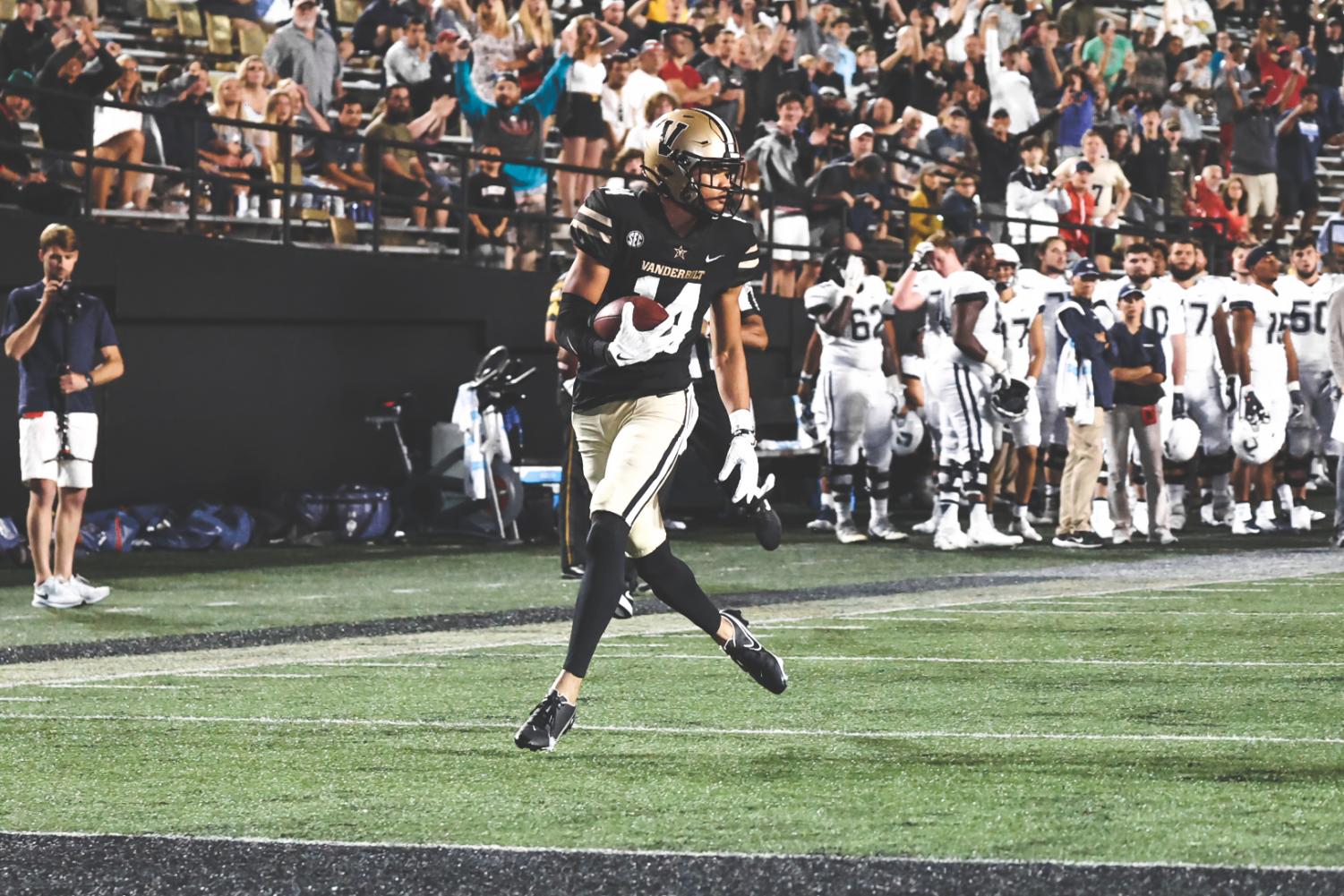 Vanderbilt wide receiver Will Sheppard runs into the endzone for a touchdown against UConn on Oct. 2, 2021. (Vanderbilt Athletics)

From sidelines to stardom: the tremendous rise of Will Sheppard

A phoenix from the ashes, Will Sheppard represents the bright future of Vanderbilt receivers.

Vanderbilt sophomore wide receiver Will Sheppard has made his presence known through the first half of the 2021-22 football season. Leading the Commodores in receptions, No. 14 has emerged as one of Vanderbilt’s most prolific playmakers.

Hailing from a small town in Southeast Louisiana, Sheppard was not heavily recruited in high school. Despite tallying 1,276 receiving yards and 24 touchdowns on 62 catches his senior year at Mandeville High School, Vanderbilt was the only Power Five program he received an offer from.

“I knew Vanderbilt was the place for me to be … My recruitment picked up real late but I always knew I wanted to play in the SEC,” Sheppard told The Hustler. “Now I’m here getting one of the best educations [in the country].”

While playing under former head coach Derek Mason, Sheppard only recorded two receptions for 30 yards during his freshman campaign. A combination of poor play calling and a crowded receiving corps limited his chances to see the field.

A choice presented itself after head coach Derek Mason was relieved for Clark Lea in 2020 following the 0-9 season. Many of Sheppard’s teammates were entering the transfer portal, as uncertainty about the new coach flooded the locker room.

“I don’t really quit on things. I wanted to feel things out and see what happened. It was only my first year here … so I was like, ‘Let me stick with it,’” Sheppard said. “Older receivers like [Chris Pierce Jr.], [Cam Johnson] and [Amir Abdur- Rahman] were all sticking with it so we all came together and decided to go out there and do what we do regardless of who they brought in.”

Lea brought not only a new coaching style and attitude to West End but a new set of position coaches, including wide receivers coach David Raih. Raih previously coached in the NFL, working with receivers such as DeAndre Hopkins, Larry Fitzgerald and Davante Adams.

“Coach Raih has been coaching receivers in the league for a long time … so he knows what he’s talking about. He’s honed in on technique and making me better,” Sheppard said. “We talked about beating the press and being right with the releases to make sure we have good vertical pressure.”

A combination of hard work, dedication and good coaching is usually a recipe for success and Commodore fans got a taste of what Sheppard could do during the 2021 Spring Game. Sheppard torched his team’s secondary for over 100 yards and three touchdowns, including a 70-yard strike from quarterback Mike Wright.

In the first game of the 2021-22 season, Sheppard picked up right where he left off. He led the team in receiving yards, catching fire and exploding for 84 yards on nine catches. 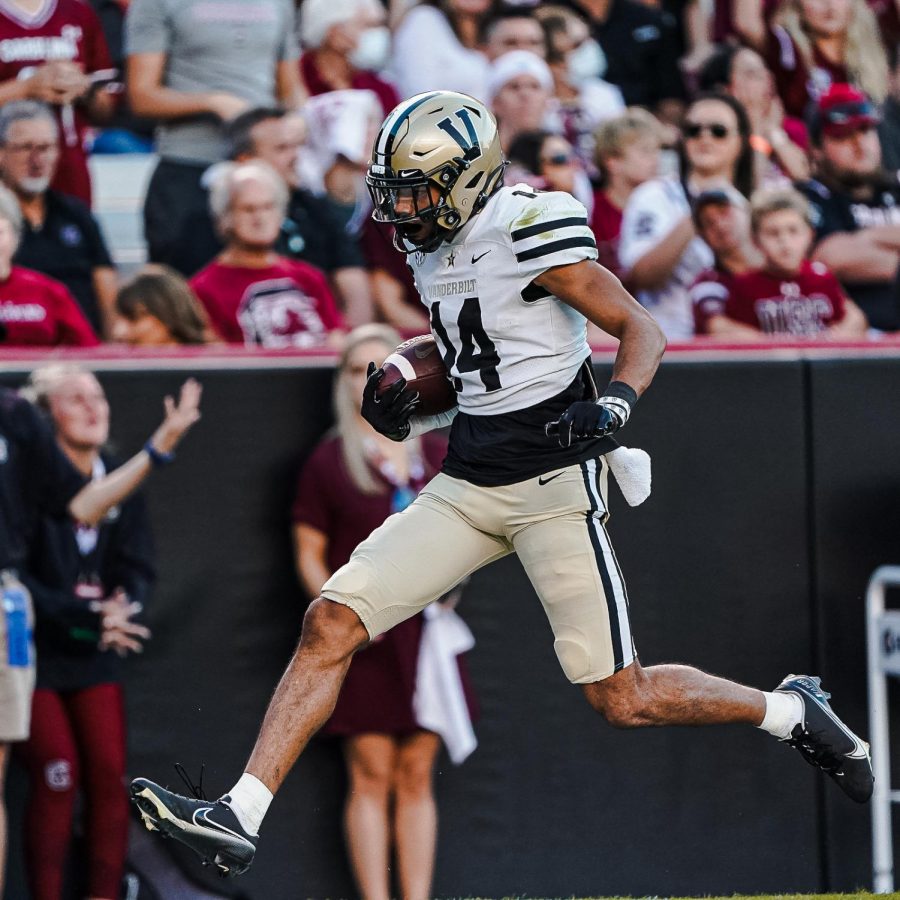 “I just put my head down and really got after it. I set my mind to what I wanted to accomplish coming into this year,” Sheppard said.  “I wanted to be in that bigger role, that starting lineup and Coach Raih helped me do that.”

In Sheppard, Vanderbilt’s offense found its spark, its playmaker. He followed his Week 1 performance with solid outings against Colorado State and Stanford, racking up 42 yards on four catches and 43 yards on six catches, respectively. However, he was shut down against Georgia as was the rest of the Commodore offense. But like a phoenix from the ashes, he refused to be snuffed out for too long.

Week 5 brought the UConn Huskies to Nashville in a must-win game for the Commodores. Sheppard understood the assignment.

The rain poured down on a critical 3rd and 8 from the Husky 26-yard line. Sheppard stood alone on the far side of the field guarded by a lone defender. He blew past him and hauled in a Ken Seals pass to secure Vanderbilt’s first touchdown of the day. And he didn’t stop there.

Only holding a four-point lead in the fourth quarter, Vanderbilt needed insurance points badly. Sheppard executed a perfect double move against single coverage and walked into the end zone for a 38-yard touchdown reception. He ignited with eight catches for 119 yards and the aforementioned two touchdowns.

“I remember my first meeting with him [Sheppard] this winter, where he was expressing the desire for more, wanting to play more. The challenge to him was to then earn it,” Lea said. “In the meantime, he has found a level of production that’s helped us win a couple games. We have to keep with that rhythm because obviously there’s a chemistry developing there that’s going to be beneficial to us.”

Following the UConn game, many wondered if Sheppard would be able to maintain his production as Vanderbilt faced a daunting seven straight SEC opponents. The doubters soon got their answer.

Vanderbilt traveled to face the University of Florida in Week 5. In Gainesville, he caught four passes for 45 yards against a tough Gator defense.

Week 6 had Vanderbilt on the road again, bringing the Commodores to Columbia, South Carolina. Against the fourth-ranked defense in the SEC, Sheppard had himself a day. The sophomore lit it up the South Carolina secondary for 120 yards on only three catches, including a 52 yard bomb for a touchdown.

The sophomore has made his mark this year already. But there is much more to come from the Commodores’ leading receiver.

“I’m just going to keep doing what I do,” Sheppard said. “I’m just trying to be the best in the SEC while I’m at it.”