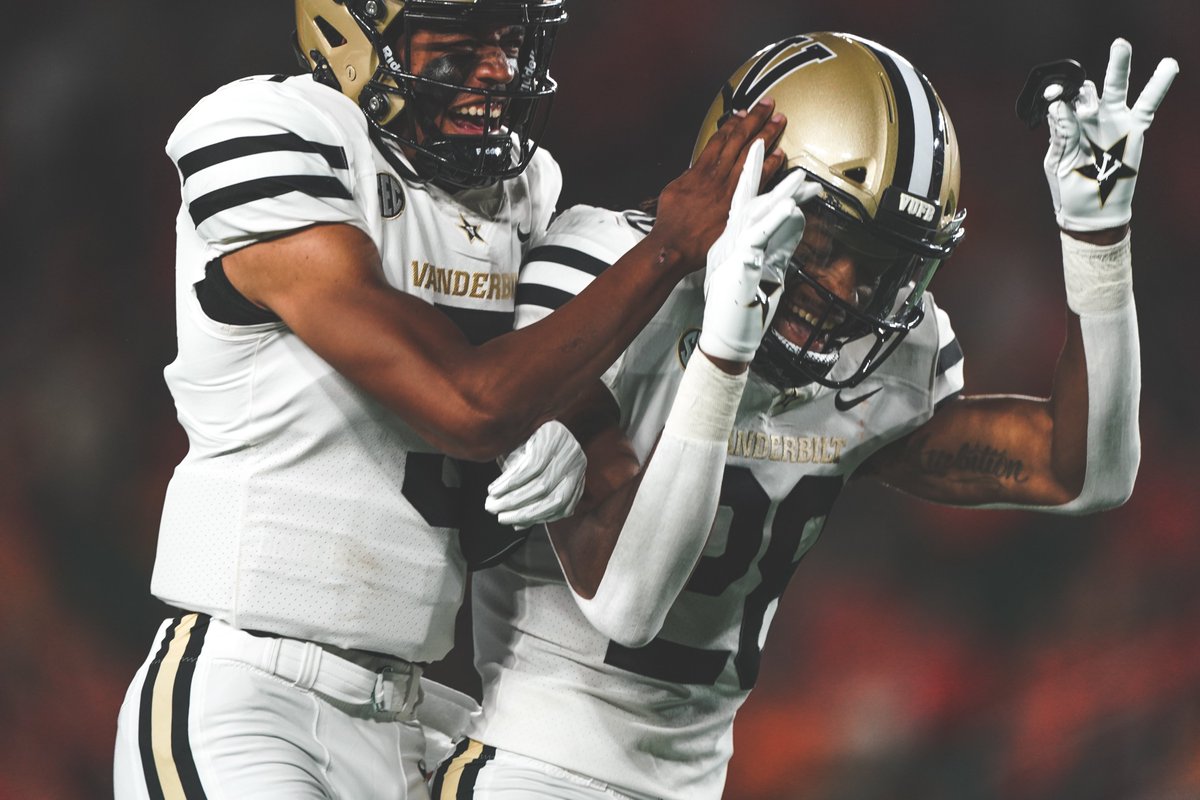 Early Sunday morning marked the end of a gruesome 11-game losing streak for the Vanderbilt Commodores, as they handled the altitude in Fort Collins to beat the Colorado State Rams 24-21.

After an 0-9 2020 season that simply brought painful losses and never-ending opt-outs, Commodore fans were eager to see a completely different football team in 2021. With a new head coach, revitalized energy and a number of intriguing storylines, fans thought that anything different would be a positive, refreshing realization.

The Commodores’ Week 1 performance was certainly different—but in just about all the wrong ways.

So Commodore fans found themselves in a very similar position on Saturday heading into a Week 2 matchup with Colorado State: wanting something different. For over 20 minutes of Saturday’s late night action, it did not appear as if that wish would come true. The Rams opened the game by marching 75 yards in just 2:03 of game time en route to a touchdown. Three plays of ten-plus yards gashed the Commodores early and shifted further doubt into the heads of fans that thought they had endured the worst of an 11-game losing streak—could it possibly get worse?

The answer was in fact a resounding no, as a different team finally showed up for the final three quarters. A stretch of 21 unanswered points was initiated by a Ken Seals touchdown pass to Chris Pierce for the Commodores first score of the game, and head coach Clark Lea’s team never looked back.

The Commodores rode a mature, confident and gutsy performance from Seals, who refused to let his first-year head coach leave Fort Collins, Colorado, without a victory.

“It was really special. I think this game was extremely important for the direction of our program and this team,” Seals said after the game, grinning ear to ear. “Whenever I come out to play I am trying to win for [my teammates]. I am obviously so blessed and thankful that I was able to do that for them tonight.”

Seals himself was special, but the effort across the board from the Commodores was admirable—a stark contrast to Week 1’s debacle. 659 days removed from the sweet taste of victory, it’s a full plate of positives after a program-defining win.

“There is so much to clean up, but that sideline and the belief on that sideline was the difference tonight,” Lea said. “That has to do with Vanderbilt football discovering itself. I give credit to our players who are learning how to compete with a dominant mindset for four quarters.”

The biggest offensive challenge in the Commodores’ Week 1 loss to ETSU was certainly a lack of rhythm. With both Seals and Mike Wright leading drives throughout the game, little chemistry was evident. But on Saturday, it was all Seals, who played each and every snap, mostly due to Wright’s lingering shoulder injury from last weekend.

Early on, the offense demonstrated some of the same shortcomings as Week 1. Seals appeared frantic, moving quickly out of the pocket and seeming to lack confidence in his offensive line. The Commodores also continued to look for the deep sideline fade, a route that has yielded little success in two games thus far.

“I settled into the game and it took me a while. First couple drives I felt a bit of quick twitchiness in my feet,” Seals said. “Once the game settled down, I got my eyes off the rush and I started to see everything.”

The sophomore was spot-on: once he beared down and sat in the pocket, he found receivers left and right. Vanderbilt registered just 17 total yards in the first quarter before exploding for 323 in the final three frames, largely thanks to a more balanced approach on offense.

Seals began finding his best targets, linking up with Chris Pierce Jr. for several big gains along with Cam Johnson, who totaled seven catches in the game, a number of times straight over the middle. He mixed in four checkdowns to Re’mahn Davis as well, after hitting him just once in the flat in Week 1.

But what was most impressive about Seals’ Week 2 performance was his ability to not only bounce back from an ugly opening Week showing, but to do so in gutsy fashion. Although his offensive line improved from Week 1, he still absorbed countless body blows in the pocket, put his head down to run for a handful of key yards and punched in a QB sneak to put his team in front 21-14.

“The clock hits zero and we had 24 and they had 21 and it’s like, ‘it’s over, we did it’. Just sheer joy. The visuals, I’ll never forget. Just hugging my teammates and being on the verge of tears,” Seals said.

The second-year signal caller was not without help, as quarterbacks coach Joey Lynch clearly had an improved gameplan dedicated to getting his best playmakers in space. Seals showed that he is at his best when getting the ball out quickly and the offensive performance was clear evidence that with a number of impressive playmakers capable of breaking tackles and finding space, the Commodores don’t need to throw the ball 15 yards downfield to actually gain 15 yards.

“[Quick offense] is something I am really familiar with and comfortable running. Last year I did it a lot. That was the base of our offense: run action RPO stuff, get it out quick. I didn’t really have many down the field passes. This offense is a lot different, there are deeper concepts,” Seals said. “I think I operate quick offense RPO stuff well. That’s what I feel comfortable doing.”

It would also be shortsighted to not mention the balanced running attack employed by Lynch, which took pressure off of Seals in a big way. The Commodores turned to Rocko Griffin for nine carries after not feeding him the ball at all last week, and Davis provided extremely timely runs in the guts of the game, including two big seven-yard gains to set up the game-winning 38-yard field goal off the leg of Joey Bulovas.

“These guys in the locker room deserve it,” Bulovas said. “They wrote the letter, I just sealed the envelope. I’m just grateful to be here.”

Whether he wrote the letter or sealed it (ha), Seals was certainly the catalyst behind the program-changing victory.

One thing Vanderbilt fans certainly know not to take for granted is clean special teams play. And they certainly should not take it for granted after Saturday’s victory.

For a program that has made more special teams mistakes—from botched 20-yard field goals to shanked punts—Commodore fans should rejoice at the effectiveness of special teams coach Justin Lustig’s unit.

Bulovas obviously played the hero on Saturday, knocking through the go-ahead 38-yarder that sparked chants of “VU” throughout Canvas Stadium. Not only is he perfect on field goal attempts and extra points, albeit in a limited sample size, but punter Harrison Smith continues to return to his junior year form. He booted nine punts that traveled an average of 46 yards against the Rams, six of which ended up inside of the 20-yard line, including one bomb that traveled 66 total yards.

While it may seem silly to discuss special teams as a key to victory, the Commodores were rock solid in the kicking, punting and coverage department. Not only did they limit errors, but Allan George came away with a key blocked punt that set up Vanderbilt’s first touchdown of the game. For a fifth-year senior who has lost his starting spot to come up with a play like that on special teams is a special illustration of Lea building accountability and culture.

Clean special teams play is also incredibly underrated for a roster that is still in a development phase. Not having to stress over things like extra points and punts just makes the jobs of the offense and defense that much easier. Special teams work best in tandem with good offensive and defensive play and that is exactly what we saw on Saturday. Blocked punts and pressured field goal attempts are more than significant developments that certainly deserve praise.

“We made some plays,” Lea said. “When we forced the field goal attempt that missed, that was a big moment for us because that was the first time we have counter-punched as a program.”

Lea opened his postgame press conference crediting strength and conditioning coach Brandon Hourigan for his team’s physical preparedness; well-deserved praise for a staff that has prioritized physical conditioning since day one.

Lea has preached that he hopes to have the most physically conditioned team in the country, as conditioning lies apart from outside influence and is something he and his staff can control. The Commodores looked the part of an extremely conditioned team on Saturday, improving in the trenches as the night wore on and putting more and more pressure on the Rams despite playing 5,000 feet above sea level.

After going down 14-0, deja vu could have set in. Commodore teams of old might not have been able to bounce back. Four early penalties, no offensive rhythm and an eager Colorado State team could have psyched Vanderbilt out. But Lea and his squad relied on preparation and a new mindset to drive the comeback. 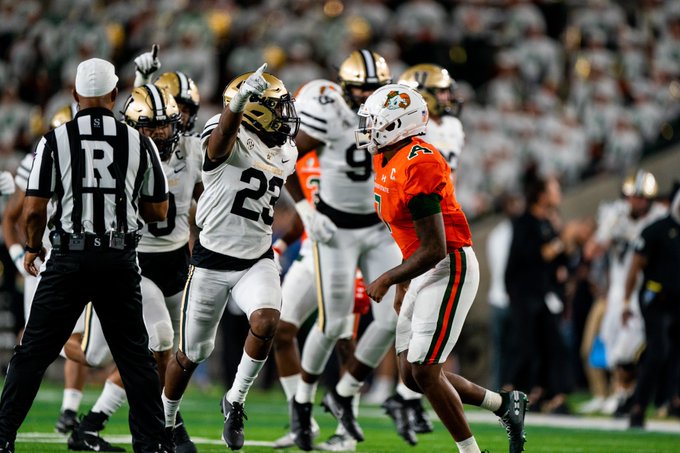 “When you prepare with humility, you can compete with arrogance and some swagger and enthusiasm and confidence,” Lea said. “We are 1-1. We don’t take ownership over the things that happened before. We took an effort in our first game that we weren’t proud of and we shifted it to one where we took it to Colorado State for four quarters.”

Through playmaking and adjustments, the Commodores built momentum from scratch—an impressive feat for a young team. They were able to mount a full-fledged effort all night long and began pressing all the right buttons in the second half.

Now they will be tasked with taking the confidence gained from this road victory and applying it moving forward. Balancing a team’s confidence and arrogance is not an easy task for a first-year head coach and Week 3 will continue providing insight into Lea’s control over his locker room.

“It’s tough because internally I struggle with, ‘do you celebrate these wins intensely like we just won a Super Bowl?’ Because we know at the end of the day we have an opponent next week and we want the exact same outcome,” Seals said. “Belief has started to grow a little bit. It was there inside the team and this will just help it expand and flourish among everyone. I am really excited to see what this team can do with some belief.”

A confident team is a dangerous team, and the Commodores will now enter their first game since November 2019 with confidence built through winning. Who knows what that might mean.

Agree with the others! Your dedication is commendable and I read everything that you put out…

Maybe the best sports writing at The HUSTLER since Skip Bayless was still typing stories (long before there were computers or word processors).

Justin Hershey:
Mr. Hershey, I’ve read multiple articles about last Saturday’s game against CSU. Your article is heads above any of the other articles. You adroitly covered every aspect of the game- not just what happened on the field but the mindset, preparation, coaching even the unusual, i.e., the high altitude.
Sir, you have a future as a journalist if you choose to take it. Keep up the good work.
VanDSIRROM