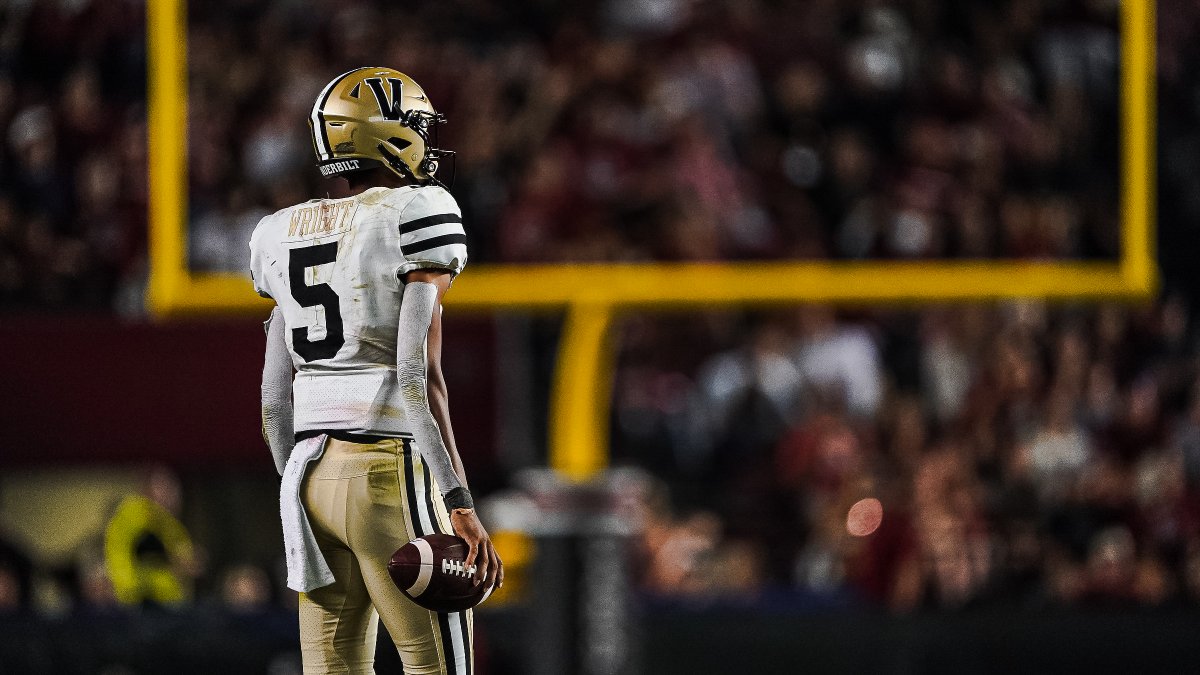 Vanderbilt quarterback Mike Wright on the field against South Carolina as seen on Oct. 16, 2021. (Vanderbilt Athletics)

Despite leading by six points with just under two minutes remaining against South Carolina, Clark Lea and the Vanderbilt Commodores were still unable to snap their 15-game SEC losing streak.

If there was a single theme from Vanderbilt’s postgame media availability after a tormenting 21-20 loss to South Carolina on Saturday it would simply be astonishment.

Shocked, stunned, baffled—use any word you want, that was the overarching tone. Head coach Clark Lea, quarterback Mike Wright and linebacker Ethan Barr each expressed that sentiment in different ways. All three also spoke of the need to execute better when it matters; they noted the importance of looking back at the film before drawing conclusions on the team’s downfall; and all three appeared just as stunned as Commodore fans everywhere as Vanderbilt surrendered a six-point lead with just 1:36 remaining in the game.

“We’re disappointed in the result, and it hurts,” Lea said after the game. “We’re a program that feeds off competition and that wants to win. That’s why we’re here, and so when you fall short, it’s going to sting. But also as we are a work in progress and we are becoming the program we know we can become, we’ll find ways that this has been a step towards that vision too.”

With just a single glance at the score of Saturday’s game, one might say the Commodores exceeded expectations. Lea’s squad entered the contest losers of 15 straight SEC matchups and were coming off of a pair of SEC losses by a total score of 104-0. Not to mention they were 19-point underdogs.

It’s not the one-point loss that should torment Commodore fans. It’s how it happened.

The game began very much like almost every game this season has for Vanderbilt: with the opponent striking early and often. The Gamecocks opened the game with a pair of 75-yard touchdown drives, marking the sixth week in a row that Vanderbilt has fallen behind early.

But all of a sudden, the Commodores found their footing thanks to swarming defense and an undisciplined South Carolina squad that turned the ball over four times and committed 10 penalties. Vanderbilt ripped off 17 unanswered points to take a 20-14 lead before the  hearts of Commodore fans everywhere sank. South Carolina backup quarterback Zeb Noland—a former graduate assistant turned walk-on—proceeded to lead the Gamecocks down the field for a game-clinching touchdown.

Confusion, heartbreak, astonishment—it’s all on the menu this weekend as the Commodores still search for their first SEC victory since 2019.

Let’s start here: with confusion. Because I, like many Commodore fans out there, was left puzzled by a number of different in-game and tactical decisions made by Lea and his coaching staff.

Two key decisions stuck out from the fourth quarter specifically. First was Vanderbilt’s decision to kick a field goal rather than try and convert a fourth-and-five to win the game with 1:36 on the clock. Second was the lack of pressure on South Carolina’s final drive.

Beginning with the decision to kick a field goal—I honestly don’t hate it. The analytics likely say that it’s the better play, Lea hedging his bet on South Carolina botching a comeback drive was probably not ill-advised for a team that had already forced two interceptions in the fourth quarter alone. Is it the more passive decision? Yes, no doubt about that. But did it cost the Commodores the game? No it did not—a lack of pass rushing on the subsequent possession did that.

Vanderbilt’s defense had by far its most productive game of the season on Saturday. In addition to generating four turnovers and racking up a sack and six tackles for loss, the Commodores were opportunistic and swarming. For the first time all season they were the aggressor.

“The takeaways on defense [were a big positive]. Our defense is becoming disruptive. We knew they were capable of that,” Lea said. “Those are things that you do to win games on the road, win league games on the road. So those will be points that we build on for sure.”

The pressure Vanderbilt continuously brought all evening from different sources was new and refreshing (see below for examples). Whether it was Gabe Jeudy-Lally on corner blitzes or Anfernee Orji flying down the middle, Vanderbilt’s approach on defense was much improved. De’Rickey Wright continues to flash his potential, tallying a second consecutive week of multiple quarterback hits. It seemed as though whenever Vanderbilt did get pressure on Saturday, something went their way.

So what was the thinking on South Carolina’s final drive?

“Just the situation—they had no timeouts, they had to drive the field and I think it was like 1:36 left. The strategy is to tackle the ball inbounds, is to drop eight and to make them check it down and try to keep the clock running,” Lea explained afterwards. “The goal was to try to defend both out cuts on both sides and to force the ball inside and underneath so that we can tackle and keep the clock running.”

The result of the drop-eight strategy was catastrophic for Vanderbilt. The secondary was discombobulated, Noland—who was fresh off the bench—never even saw the face of a Vanderbilt pass-rusher and the Commodores were unable to make the plays necessary to prevent a nine-yard touchdown pass to Xavier Legette.

Both of these decisions embody the, “not playing to win but playing not to lose” mantra, scarring Vanderbilt fans into that mindset. And that is nothing but fair. Why call off the pressure that your defense has been thriving on all game?

His decision to call off pressure in the fourth quarter was a defensive coordinator-esque decision, not a head coach-esque decision. A head coach knows when to feed off his team’s momentum and throw out the traditional playbook—Lea is still learning how to do that.

Besides the heartbreak of simply losing a gut-wrenching game, your heart’s got to break for Mike Wright.

After it was announced that Ken Seals would be inactive due to a hand injury, Wright was given the nod and he gave his team a legitimate shot to steal an SEC game on the road.

“I’m proud of Mike. I think he stepped up,” Lea said. “I think he represented himself well as a competitor. I think he made some plays that we needed, and I felt like he put this team in position to win the game and that’s all we can ask of him.”

The Georgia native finished with 206 yards through the air and another 41 on the ground. A 52-yard touchdown to Will Sheppard was also credited to his name alongside a fumble and an interception.

Regardless of who was under center on Saturday, Vanderbilt’s quarterback play seemed destined to improve against a weak South Carolina team, but Wright’s presence within the Commodore offense seemed to bring out a number of new wrinkles that South Carolina wasn’t prepared for.

The Commodores entered the game as the final team in the country to not have tallied an offensive play of 40-plus yards. Wright broke that trend as three of his 11 completions ended up being greater than 40 yards. The threat of him taking off seemed ever present in the minds of Gamecock defenders and he was able to pick up a number of key first downs simply by taking off as well.

“I thought we were more explosive today, which is something that had kind of held us back in the past,” Lea said. “We were able to generate plays that went past 20 yards and 40 yards tonight, and that was helpful to us. I felt like he was able to extend and find routes down the field.”

Alongside Wright, Sheppard notched his second consecutive game of over 100 yards, the Commodores tried a number of trick plays involving Devin Boddie and Cam Johnnson and averaged a whopping 18.7 yards per completion. 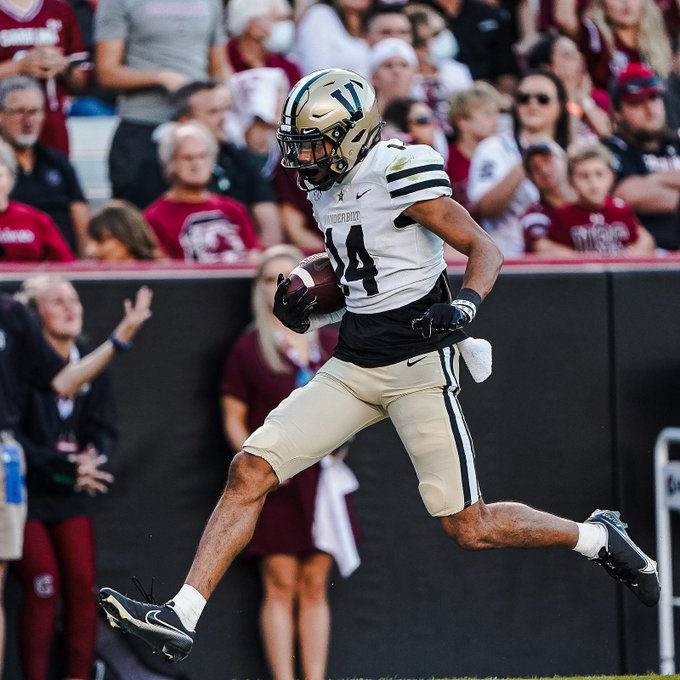 It just felt more creative and dare I say, more entertaining? Wright adds an element of intrigue that is incredibly captivating. The speedster flipped his commitment from UCF to Vanderbilt knowing full well that Ken Seals was also headed to West End. That didn’t phase him and he finally got his chance to start on Saturday in a performance more than worthy of praise—and probably worthy of a victory.

A 20-point loss to an FCS team, a 62-0 blowout to No. 1 Georgia and now a one-point loss to the second-worst team in the SEC; you are probably thinking, “how many other ways are there to lose a football game?”

Vanderbilt has found numerous ways to drop ballgames this fall, there is no doubt about that. But there are going to be a lot more one-point losses before this team finally knows how to win. Games like this—in a pressure-packed environment on the road—are the ones that players and teams learn the most from. But most importantly, these are the games that head coaches learn the most from.

That was the first time in his head coaching career that Lea was put into a one-score situation against an SEC opponent and every decision he made was crucial—he is an incredibly bright coach who will certainly learn from that experience.

“The message in the locker room is we have to own it. We own the fact that we came up short, and we don’t like it. But there are no victims here. We take responsibility and ownership over it. That’s coaches and players alike, and that starts with me,” Lea said. “We’re going to let it sting for 24 hours, then we’re going to win the response and we’re going to put together an effort to allow us to be better next Saturday.”

It’s difficult to compare any one coach to another, but in James Franklin’s first season, Vanderbilt lost five games by a touchdown or less. The next year, his team won three SEC games by a touchdown or less. There are a lot more close and painful losses on the horizon before those games become wins; that’s just the natural progression of a rebuild.

Astonishment was not just limited to Vanderbilt’s loss, however. Just a few hours east, a different level of astonishment ensued in Tennessee’s game against No. 13 Ole Miss.

“I don’t know if I’m more excited that we found a way to win or that I didn’t get hit by the golf balls [fans] were throwing at me,” Ole Miss head coach Lane Kiffin jokingly said on SEC Network after the game.

Golf balls? That’s not a sentence I thought I’d ever write. Astonishment. What’s next, college football?