Vanderbilt dropped the first game of the Clark Lea era in ugly fashion on Saturday, losing to ETSU 23-3. (Vanderbilt Athletics).

Vanderbilt dropped the first game of the Clark Lea era in ugly fashion on Saturday, losing to ETSU 23-3. (Vanderbilt Athletics).

Vanderbilt football’s rock bottom wasn’t an 0-9 2020 campaign, but rather a grueling, unenthused 23-3 loss to an FCS team at home.

Just one day before the beginning of the Clark Lea era, I wrote this. An inspiring, perhaps a bit desperate plea to rally Vanderbilt fans around new head coach Clark Lea and the direction of this football program. I wrote it ahead of a game in which Vanderbilt was favored by 21 points; ahead of a game that saw the return of tailgating, Vandyville and new energy to Vanderbilt Stadium. It should have been a pretty safe column—at least in the short term.

I wish I could unpublish it.

After a nine-month period that saw drastically improved commitment to football on West End,  I felt as though the Commodores and Lea deserved a nice crowd to celebrate a new era of Vanderbilt football on a Saturday that should have brought home the team’s first win in 651 days.

Instead, that commitment that Vanderbilt fans have waited for for decades may as well have been thrown out the window after a more-than-concerning, incredibly confounding and downright frustrating 23-3 loss to East Tennessee State University. New energy aside, Lea and his squad reached a new rock bottom for a program that failed to win a single game in 2020.

“Obviously, we are very disappointed with the result tonight. I just want to tip my cap to Coach Sanders and East Tennessee State, they did a great job of executing their plan,” Lea said after the game. “This is a learning moment as a program, an indicator of where we are, and where we need to start building from. We have a locker room full of players that are very disappointed, but we can’t do anything about what we experienced tonight. It’s about moving forward for us.”

As the head coach said—credit to ETSU. They controlled the game from start to finish and flat out looked like the better team. But shame on the Commodores who failed to register a single sack or touchdown while racking up eight costly penalties and three devastating turnovers.

I thought my Commodore Brunches might look a bit different this year—maybe a bit more fruitful with a semi-positive spin. But that wasn’t to be in Week One. The menu looks rather similar to prior seasons with possibly even more uncertainty on the horizon: more questions than answers, more burnt toast than fresh fruit, and one more loss than I thought was possible.

While there were average individual performances across the board from the Commodores, the most concerning part of Saturday’s disaster was how underprepared and poorly coached Vanderbilt appeared. It only took one game for the new staff’s X’s and O’s to fall drastically short of expectations.

Entering a game against an FCS opponent, Vanderbilt should have boasted a clear size and speed advantage at most positions, making X’s and O’s simple. But the Commodores continually failed to execute on those advantages and put themselves in positions that were simply harder than necessary.

Lea said this week that he had planned to use both Mike Wright and Ken Seals significantly in this contest and he certainly did that. Seals got the start while Wright took his first snap with under one minute remaining in the first quarter.

“The plan was always to use both [quarterbacks]. We wanted to get Mike in sometime early in the second quarter just to give him a chance to run the offense,” Lea said. “I think at that point, too, we were also looking for a spark. So we wanted to see what he brought.”

The Commodores elected to stagger the two quarterbacks, letting them each take two or three drives at a time before switching. Seals didn’t play the entire third quarter but returned to play almost the entire final frame. The staggered quarterback approach yielded absolutely nothing positive, as neither quarterback was able to find any sort of rhythm all night long.

But what made the situation more detrimental was that both were being asked to do more than was necessary. Throw after throw came from the far hash marks to the opposite side of the field. Receivers were constantly running sideline go-routes that require a level of chemistry and consistency that—this early in the season—this team likely doesn’t have.

“Some of the inside fades or the slot fades, we have to throw a better ball to give the receiver a chance. If teams are going to load the box, and create one-on-one matchups on the edges, we need to be able to attack those,” Lea said. “As the game extended, we got some timing throws, curls, and some of the spacing patterns. We found rhythm.”

Attacking one-on-one matchups is certainly necessary, but the head coach is right—the Commodores’ two longest drives of the game were their final two possessions in which Seals found seven different receivers and completed seven passes for 10-plus yards using simple curls, out-routes and check-downs.

There is a time and a place for testing defenses, but Saturday—the season opener against ETSU—was not that time or place. Where were the simple Ben Bresnahan curls over the middle? Where were the Chris Pierce slants? And where on earth was Amir Abdur-Rahman—the Commodores’ second-leading receiver last season?

It’s only the first game under this new coaching staff, but to allow 23 unanswered points with that combination of drives seems to reflect failing tactics.

Lea and his staff were not prepared for this game and it showed in a big way. But for one creative Mike Wright shovel pass to Cam Johnson, each play brought little excitement or flare. Consistent inside zone runs and low-percentage fade routes paved the way for an uninspiring offensive performance.

Furthermore, the energy on the sidelines was equally uninspiring, with little visible comradery or passion and a head coach who seemed to mill his way around the Commodore side all night long looking for answers.

I didn’t think I’d break out Derek Mason-isms this early in the season, but here we are. Contrary to former head coach Derek Mason’s opinion, both ‘X’s and O’s’ and ‘Jimmies and Joes’ are extremely important, and the former head coaches’ legendary quote is far too applicable after Saturday night’s debacle in which neither the Commodores’ ‘Jimmies and Joes’ nor their ‘X’s and O’s’ worked.

There were a number of struggling position groups on Saturday and they started with both lines of scrimmage. The Commodores lost a pair of outstanding pass-rushers in Dayo Odeyingbo and Andre Mintze and the theory was that Vanderbilt boasts a number of talented upperclassmen who simply haven’t had their time in the spotlight just yet.

But ETSU star running back Quay Holmes had his way all night long. He gashed the Vanderbilt defensive front for 149 yards on just 23 attempts, making slick cutbacks and finding holes that the Commodore defense was unable to plug up.

The ironic thing is that the Commodores hardly missed any tackles—in fact, they made a number of impressive, second-level, open-field takedowns that prevented larger plays. But the initial point of attack defense was underwhelming, as is evident by a goose egg in the sack column and no tackles for loss until the 10:52 mark of the third quarter.

As average as the Commodore defense played, Vanderbilt did not lose because of it. The Buccaneer offensive line was certainly the aggressor, but ETSU scored 10 points off of three Seals turnovers.

The fluky fumble scoop for a touchdown demands no analysis—I can’t pretend to explain how that ball came out of his hand and it likely will never happen again. But the interceptions are concerning. Six of Seals’ 10 interceptions last season came inside the opponent’s 40-yard line and he added two more to that tally in the loss.

“We’ll look at the film and figure out where the breakdowns were, what created the confusion for the quarterback and find where the improvements [need to be],” Lea said. “It’s discouraging. I know that both those guys are extremely prideful, and they’re disappointed. But I’m proud to coach them and I’m excited to get back to work with them.” 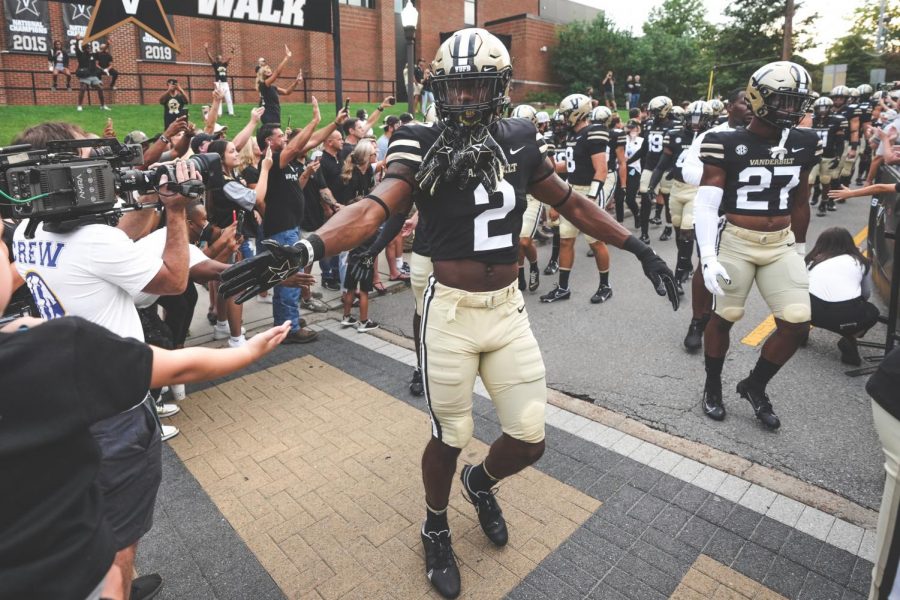 Gallery|3 Photos
The Commodores returned to a crowd of over 22,000 fans in Vanderbilt Stadium. (Vanderbilt Athletics).

Offensively, much of the quarterbacks’ struggles can certainly be chalked up to play calling—a far-side slant to Will Sheppard inside the 10-yard line hardly seems like a high percentage throw—but Seals’ decision-making will continue to be a topic of discussion moving forward.

Another question mark will be this team’s offensive line. The patchwork group of opt-out returnees, a walk-on and a new right guard struggled to create time for both Seals and Mike Wright. Both quarterbacks were flushed out of the pocket on numerous occasions and mixed with the questionable offensive scheme outlined above, it was a tough night for the boys up front.

There is no doubt that this loss digs Lea a hole deeper than the one he inherited. I could go on and on about what a collapse this was. It has—whether rational or not—alienated fans early in his tenure and may impact recruiting as well. But as gut-wrenching as it was, when placed in a broader perspective, its impacts on the long-term prospects of Vanderbilt football are virtually zero.

“We have a long way to go. But I knew that heading into the season. We can cover that ground quickly,” Lea said. “This has always been about the vision for the future of Vanderbilt. It’s never been about just playing East Tennessee State on Sept. 4.”

Losing a game to an FCS opponent comes with a certain amount of public ridicule that is well deserved, but expectations need to be tempered and clearly more patience than expected will be required. Lea inherited a program that saw 20+ players transfer from a team that went 3-18 in its last 21 games; no one should be expecting more than a handful of wins out of this team this year. It’s not an excuse for this loss, but put in the greater context of the Lea era, it isn’t something that will make or break the seasons to come.

Bright spots were few and far between on Saturday, but Sheppard had himself a nice game. The sophomore was one of the lone Vanderbilt receivers to create meaningful separation and racked up 19 targets and nine receptions because of it. Transfer running back Re’Mahn Davis also flashed positive signs and numerous other Commodores have plenty more to prove.

And how about a hand for the special teams unit? Punter Harrison Smith appeared to return to his 2019 self, booting three beautiful punts that should have all been downed inside the 5-yard line. New kicker Joey Bulovas also made his mark on the contest, forcing a—evidently wasted— 53-yard field goal through the uprights in the first quarter and helping Vanderbilt fans forget the kicking woes of old.

Imagine that; Vanderbilt hits its longest field goal since 2018, but becomes the first SEC team to lose to an FCS opponent since 2015. Yet another chapter in the incredibly unique Commodore football fan experience.

“This is a tough result to stomach,” the dejected, first-year head coach said. “We have to make the choice to win the response.”

What disappointed me the most was the lack of enthusiasm. No emotion. No swagger.