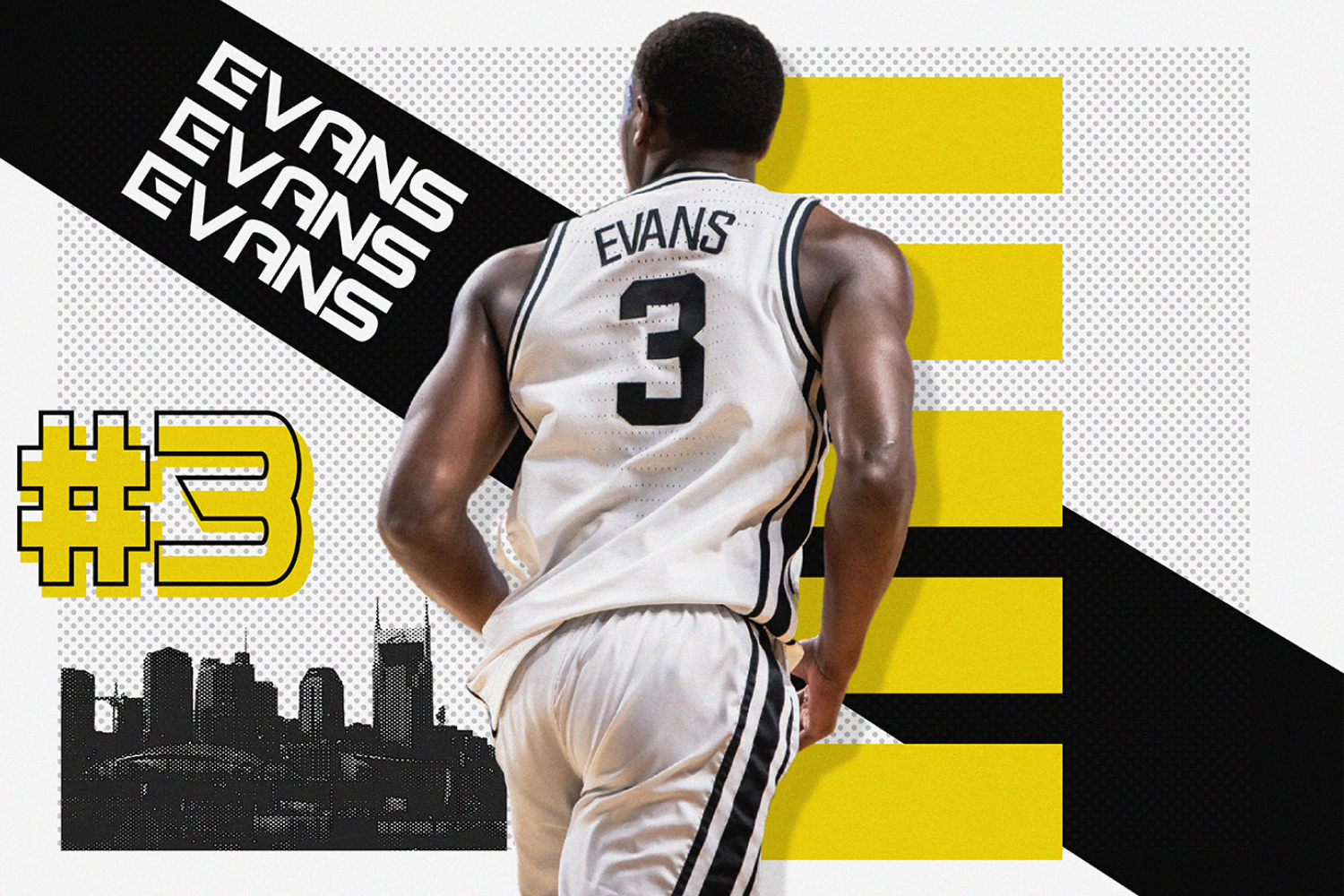 Like an older brother, Max Evans steadies the Commodores amidst a challenging season

As his senior year comes to an end, Evans is enjoying his role as a leader and consistent contributor.

It has been a difficult season for Vanderbilt basketball. Between the losses and the COVID-19 setbacks, there have been more downs than ups. Yet, despite all the turmoil, senior guard Max Evans takes pride in being a steadying presence.

In his fourth and final year at Vanderbilt, Evans sees value in being a veteran leader on a young roster.

“[I’m] trying to be a vocal leader on and off the court,” Evans says. “By telling [younger players] my experiences [and] giving them a couple of pointers here and there.”

The Houston, Texas native is considered a role model by many of the team’s underclassmen, and he has developed his strongest mentor-mentee relationship with freshman guard Issac McBride.

McBride first met Evans when he visited the school last year and was immediately impressed with the then-junior’s mentality.

“He was all for the team, and his energy spoke for himself. He just plays with his heart,” McBride says.

Now that they share the same locker room as teammates at Vanderbilt, Evans has become “someone I could look to like an older brother,” according to the freshman.

On the court, Evans’ intensity and focus always stand out on the team. When it’s gametime, Evans is known to lock-in and have a serious attitude.

But off the court, it’s a different story—Evans is one of the comedians on the team.

“[Evans] is about his business when he gets on the floor, so for him to be so good at the game of basketball, and such a great leader, for him to be one of the top funniest guys on the team we just think that’s special because most people don’t have that switch where they can turn it on, turn it off,” McBride says. “You either have one or the other, but Max has both”

Evans’ intangibles and experience stand out to all of the team’s younger players, according to McBride.

His on-court versatility is what separates him as a player. Under two different coaches who played distinct styles, Evans has filled a variety of roles.

He says he has been asked to play any position between point guard and power forward, while also being brought into the game as a defensive specialist, knockdown shooter and playmaking guard.

“I take pride in [my versatility],” Evans says. “I can go out there, play the one through the four if Coach asks me to—whatever can get the team to win.”

Evans had this whatever-it-takes attitude when he arrived on campus in 2017, and it has persisted.

The senior guard cited the combination of elite academics and an opportunity to play in the SEC as his primary reasons for choosing Vanderbilt. In his first two seasons playing under then-head coach Bryce Drew, Evans averaged just under 15 minutes per game.

When Drew, the coach who recruited Evans, was fired, the guard had to make a decision on his future in college basketball. Evans chose to stay after Jerry Stackhouse was announced as the program’s next head coach because of Stackhouse’s NBA experience and fit with the team.

Since the Stackhouse hiring, Evans’ game has evolved, and his numbers across the board have significantly increased.

“I feel like my game’s changed a lot [under Stackhouse],” Evans says. “Coach Stack really believes in me, so for him to just give me the confidence to go out on the court to play my game really means a lot.”

This combination of more playing time and a new playing style has led to a more significant role on offense for Evans under Coach Stackhouse. He considers last season’s 31-point explosion against the then-18th ranked LSU Tigers in Memorial Gymnasium, which ended Vanderbilt’s streak of 26-straight conference losses, his favorite memory and arguably best game wearing the black and gold.

Outside of his consistent defense and steady playmaking, Evans is known for occasional scoring outbursts that have propelled the Commodores to victories.

In the past two years, Vanderbilt is 4-0 when Evans has scored 20 or more points in a game, highlighting how crucial he is to the team’s success.

With only four scheduled regular season games left in his college career, Evans just hopes to finish the season strong.

“I just keep continuing to put in the work and hopefully I can be a little bit more consistent with those types of games,” Evans says. “Once you just get past those lows and into the highs, it can be very rewarding.”

After Vanderbilt’s most recent win over Mississippi State on Saturday afternoon—Evans had 20 points on 6-for-11 shooting and four rebounds—Coach Stackhouse praised the senior guard’s hard work and production.

“I’ve had [Evans] in-and-out of the lineup, but just with his defensive effort and just his energy, it’s hard to keep him off the floor, and when he’s able to make shots the way he is right now, it’s just a huge bonus for us,” Stackhouse says.

In a season that has been engulfed by the COVID-19 pandemic, Evans understands he is playing during a historic period.

“It’s tough. This is something I’ll tell my kids later on in life, that I played college basketball in a pandemic,” Evans says. “It’s just all about perseverance; it teaches you like no other just to keep fighting and keep pushing each day.”

Evans’ main goals for his final year were to stay healthy, play well and enjoy the season.

“I’ve been having fun out there and just living it up,” Evans says.

The next few weeks are uncertain for Max Evans, but many including his mentee are confident in what the future holds for him.

“I just think that Maxwell is a complete person, not just a complete basketball player,” McBride says. “After he graduates, I just wish him the best in life; I know he’s gonna do great things.”