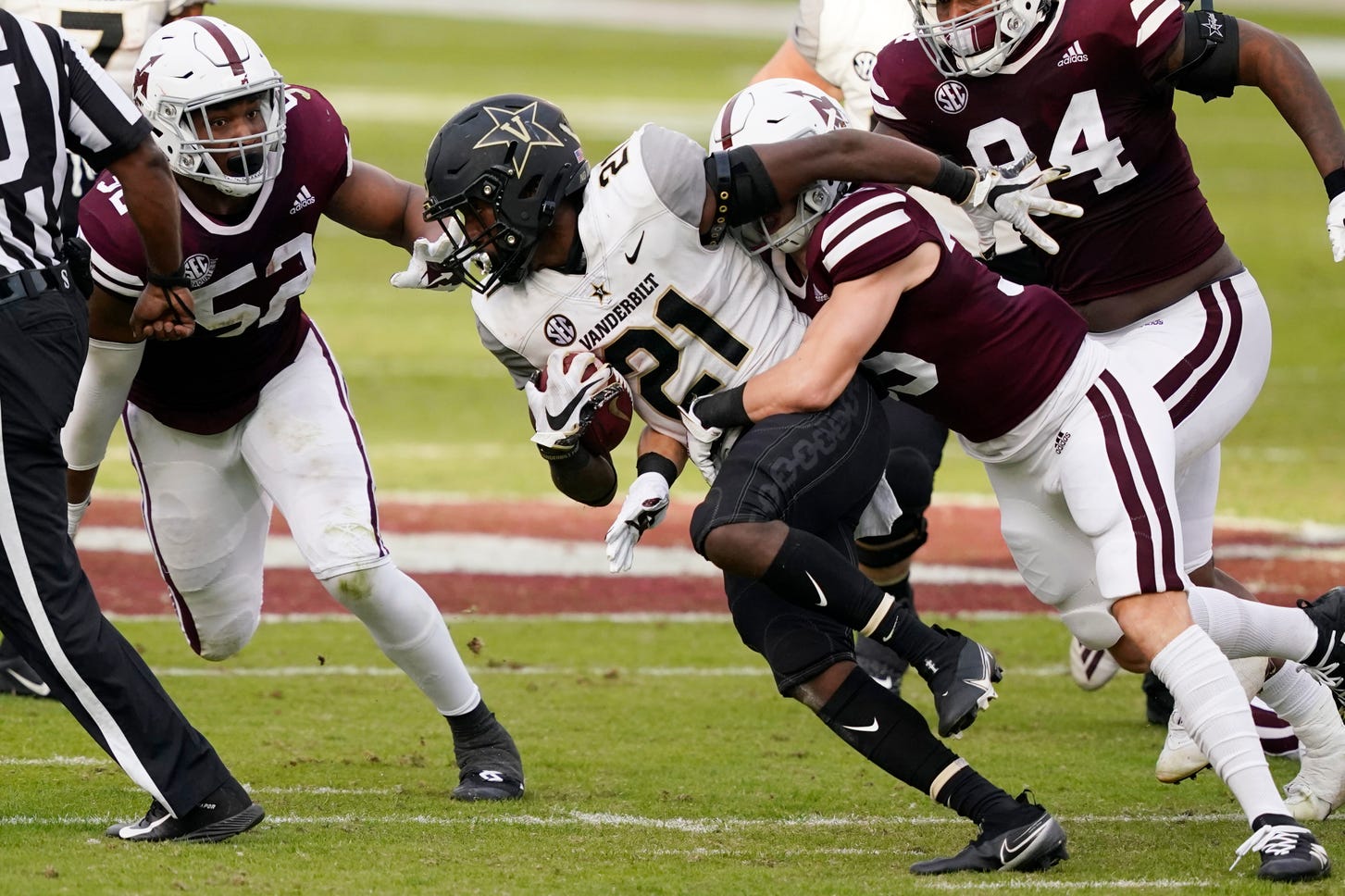 Vanderbilt fell to 0-5 in a close loss to Mississippi State Saturday. Five more losses and the Commodores would become the first winless team in SEC history.

The story of Saturday’s game?

On paper—perhaps even in real life (definitely in the second half, at least)—the Vanderbilt Commodores were the better football team. And yes, they still lost 24-17.

“There’s only one stat in football that counts, and that’s winning,” Vanderbilt head football coach Derek Mason said after his Commodores fell to 0-5.

The 2020 football season has been hopeless for Vanderbilt, and on Saturday that culminated in a mistake-ridden loss to the bottom-dwelling Mississippi State Bulldogs. With just five games remaining, it seems increasingly likely that the Commodores string together the first winless season in Southeastern Conference (SEC) history. It’s been painful to watch. Yet somehow, on Saturday, the Commodores outdid themselves.

It was a beautifully hideous display of Vanderbilt football: the defense thrived, while the offense dumped the ball off to the nearest Bulldog like they were playing hot potato, racking up not one, not two, not three, not four, but five turnovers.

Saturday was about as good a chance as the Commodores will have all season at a win. The past few weeks, Mike Leach’s signature “air raid” offensive scheme—an exhilarating scheme if I don’t say so myself—has looked like a jet plane without wings. They’ve been heaving the ball downfield as Leach loves doing, and it’s been going so poorly that it cost quarterback K.J. Costello his job. Things were no different against Vanderbilt. The Bulldogs couldn’t get anything going in the passing game.

A team with 204 yards of total offense beat Vanderbilt in Week Five. Not great, I say.

“I’d like to first of all give credit to Mississippi State,” Mason said, commending the unequivocally mediocre performance of the victors. “I thought they played a tough ballgame. They jumped out early and made us have to work our way back.”

Of all things to critique in Vanderbilt’s latest loss, there’s one that stands out from the pack—and it doesn’t have a thing to do with their on-field performance. No, I’m talking about the postgame press conference. The one time we get to hear from Vanderbilt student-athletes after a loss. The select Commodores often take the podium looking visibly distraught; they frequently keep their answers short and to the point.

At the end of the day, no matter how much the football team struggles, the student-athletes remain extremely poised. These are undoubtedly the smartest football players in the SEC, and it shows in these high-pressure situations, where there isn’t always a “right” answer to the question. I truly believe they handle these situations quite well, especially when they skid their way to a Vanderbilt-esque loss. They tend to show immense maturity.

After the latest loss, though, the media—and the fanbase, who would probably love to hear an explanation as to why and how this loss transpired—was robbed of that opportunity. Following Mason’s media availability, the press conference came to a close without any student-athletes being made available.

The Tennessean reported that wide receiver Chris Pierce, who had six catches, 76 yards and probably the most impressive Vanderbilt touchdown catch of the season, was supposed to take the podium alongside Dayo Odeyingbo, the Commodores’ star defensive end. But they didn’t.

“Vanderbilt spokesperson Alan George said travel constraints prevented player interviews because the team had to make a quick departure in flying out of Starkville,” The Tennessean said.

I’ll believe it, because I have no reason not to. But that doesn’t make it OK. That is really frustrating, and after going 0-5, it’s borderline inexcusable. Making players available after any game is the right thing to do, and I’m disappointed that we did not have that opportunity Saturday. That’s all I’ll say.

Obviously, this had to be stated first. Because this is why Vanderbilt lost the ballgame.

Vanderbilt was not any worse than Mississippi State. The Commodores were not outplayed, per se; in large part, they matched up quite well against a fellow resident of the SEC basement.

The Commodores just shot themselves in the foot with lackadaisical turnovers.

Three straight Keyon Henry-Brooks rushing plays lined up a third-and-one for the Commodore offense, and Ken Seals dropped back in the quickly-collapsing pocket only to launch a deep pass to Cam Johnson, who was about 25 yards down the field. Evidently, Seals didn’t see the Bulldog defender, Collin Duncan, ballhawking about 20 yards down the field, and proceeded to throw it into Duncan’s outstretched arms for an interception. Tough, but not killer.

Now, let’s fast forward a few possessions, past the missed field goal (a miss from 50 yards is nothing to be ashamed of), past the turnover on downs and past the punt for a much worse turnover.

Vanderbilt, after starting its drive at around midfield, worked its way to the one-yard line. The playcalls were as follows: freshman tailback Rocko Griffin up the gut behind a patchwork offensive line (starting offensive linemen Dan Dawkins and Drew Birchmeier were stuck in quarantine, leaving mostly second and third stringers). Stuffed.

The next play: freshman tailback Rocko Griffin up the gut behind a patchwork offensive line, and shockingly, he was stuffed again.

Then, of course, on third and goal (now from about the four yard line, due to the loss of yards), Seals’ pass was telegraphed perfectly and picked off by Erroll Thompson.

Unlike the first interception, this was a redzone turnover—which is, in fact, killer.

The Commodores went on to commit a few more turnovers in this contest, courtesy of an Amir Abdur-Rahman fumble, another Seals pickoff and a meaningless, garbage time Seals fumble.

“Ken’s got to take care of the ball—bottom line. He had a great night. I get all that. Everybody’s into stats,” Mason said after his quarterback finished 31 for 46 with 336 passing yards, one touchdown, three interceptions and a fumble. “I’m into wins. I’ve got a young quarterback, and he’s gonna continue to get better, but he’s gotta protect this team. When you lead this team, you’ve gotta protect this team, and he understands that.”

Mason continued to note that his “quarterback of the future” will watch the film, digest the mistakes and learn from them. Conversely, I hope the coaching staff learns from that redzone drive. Those two brutal playcalls put Seals in a tough spot, and he threw a pick.

Once again, in case you missed it: they ran back-to-back goal line plays in which a true freshman running back tried going up the gut against a stiff Bulldogs defensive front, and he was led by what Mason himself described as a “patchwork offensive line” in the postgame presser. I’m not a coach, but I certainly wouldn’t have called that.

This game started like most other Vanderbilt contests this season. After a quick Commodore turnover, Mississippi State put together three straight drives into enemy territory, two of which were good for a touchdown, the third good for a field goal.

These are the types of games where the opponents blow the door wide open. This is where Vanderbilt, you know, starts chasing.

But not in this one. Credit to defensive coordinator Ted Roof for revitalizing his defense; for amending a gameplan that was so clearly not working, and for giving his players the confidence boost they desperately needed. After the first three possessions saw the Bulldogs pick up 17 points off a total of 27 plays for 143 yards, the Commodore defense absolutely bullied them.

Mississippi State punted for each of the next seven possessions, five of which they went three-and-out. And while the eighth may have resulted in a touchdown, it was only because the late-game Seals fumble left the Bulldogs just 13 yards away from a score.

In those seven possessions, the Bulldogs ran 26 plays for 43 yards. Sure, their offense may be one of the worst units in the conference—but credit to Vanderbilt for making the necessary adjustments and playing excellent defense.

“I’ve gotta give a lot of credit to our defensive players, Coach Roof for making adjustments in the second half, and our kids just played hard,” Mason said. “I finally saw what this defense can look like for a period of time, and that’s something that all of us can build from. We know if we take care of the football, if we can play well defensively, hunt, get to the ball and do what we did on third down—which is hold them to 4 of 13 on third down—we’ve got a chance to be a pretty salty defense.”

My concern is about the longevity of this performance. Sure, the defense was excellent, but this came merely one week removed from one of the worst defensive performances in recent Vanderbilt memory.

When asked whether this defensive effort is repeatable, Mason seemed optimistic.

“It was a competitive week of practice, and they carried over from practice. It started slow, but they carried over from practice what they had learned throughout the week about themselves in terms of football,” he said. “Football is the ultimate team game. It’s not about one guy making all the plays. It’s about everybody doing their jobs. So in order for us to be repeatable, everyone’s got to do their jobs.”

Hopefully, the defense can repeat its performance. Needless to say, that’ll be difficult as the schedule gets tougher.

It’s past time we address the elephant in the room.

Vanderbilt is the worst team in the SEC, and they just lost back-to-back games against bottom-tier conference opponents. And bottom-tier is a generous way to put it—Mississippi State sucks.

Vanderbilt beat itself in this game by logging five turnovers. Now, they enter the tougher part of the 2020 schedule.

All indications point toward Vanderbilt slinking its way to the first ever winless season—yes, that’s 0-10—in SEC history.

W0ah, we’re halfway there. Take my hand, we’ll make it, I swear.

The Vanderbilt Hustler welcomes and encourages readers to engage with content and express opinions through the comments section on our website and social media platforms. However, The Hustler reserves the right to remove comments that violate the outlined policy. Comments which contain vulgarity, hate speech, personal attacks or appear to be spam or commercial promotion will be blocked or removed by The Hustler. The comments section, both on the website and social media, is moderated by the Editor in Chief.
All The Vanderbilt Hustler Picks Reader Picks Sort: Newest
Subscribe
Login
1 Comment
Newest
Oldest Most Voted
Inline Feedbacks
View all comments
D
Doug Bates

what a combination ! a perfectly awful football team covered by a dynamite sports reporter. My compliments to you Simon. I regret we are all saddled with this utter load of crap. “…first I would like to give credit to Miss State” oh brother!