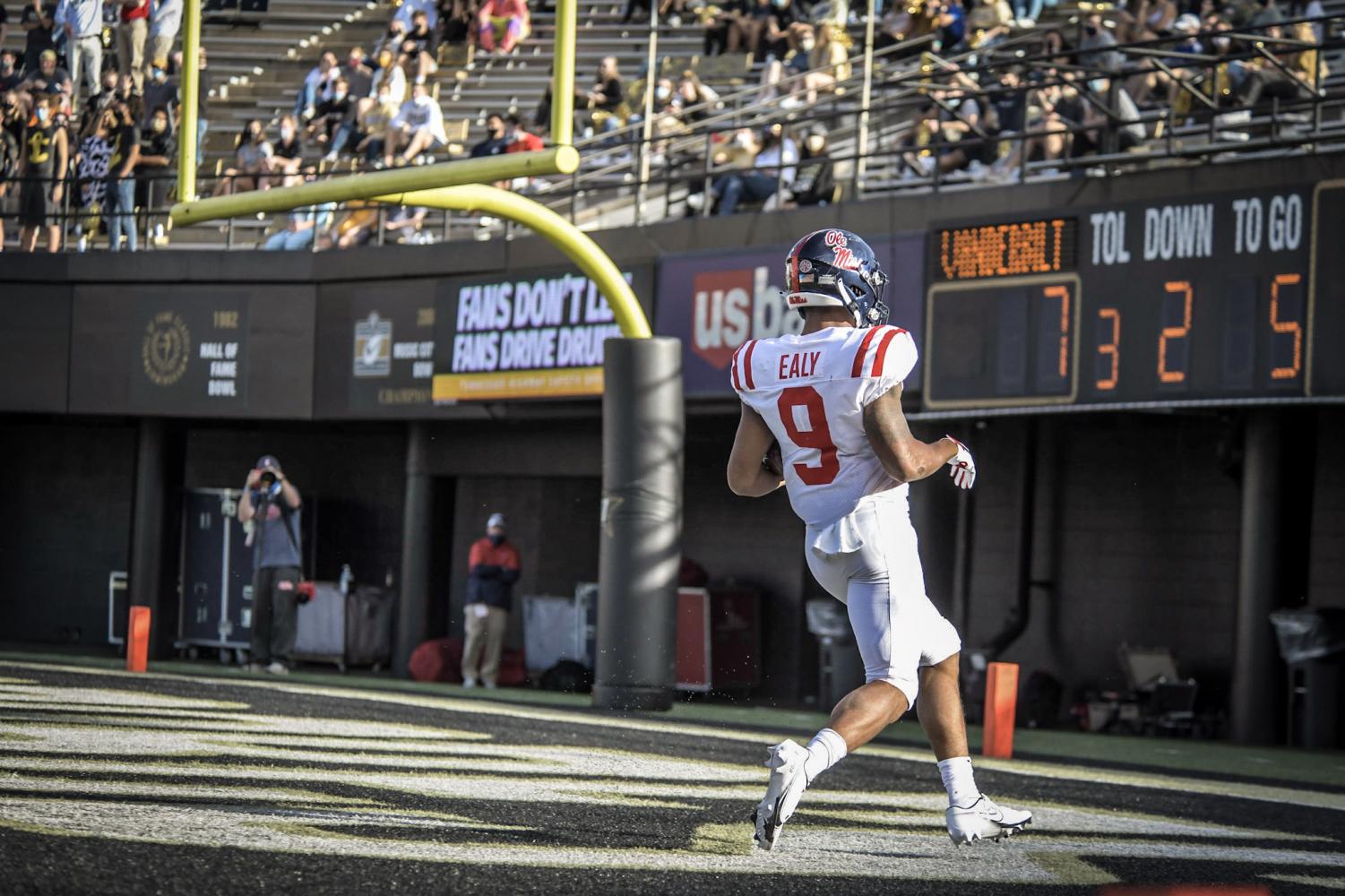 Vanderbilt fell to 0-4 with a sloppy, 54-21 loss to Ole Miss, a game in which one receiver reeled in 14 catches for 238 yards and the Rebels offense broke one record after the next.

Vanderbilt entered Saturday’s contest with a chance at redemption.

The 0-3 Commodores were coming off back-to-back bye weeks, one a result of a postponement and the other a regularly-scheduled off week. They had three weeks—21 days exactly—to prepare for Lane Kiffin’s Ole Miss team. They had the same scouting report we did: the Rebels’ defense was awful, and their offense would be paced by wide receiver Elijah Moore, who entered the game as one of the Southeastern Conference’s (SEC) leading receivers.

It feels like we’re playing the same old song, but Vanderbilt couldn’t have looked less prepared. 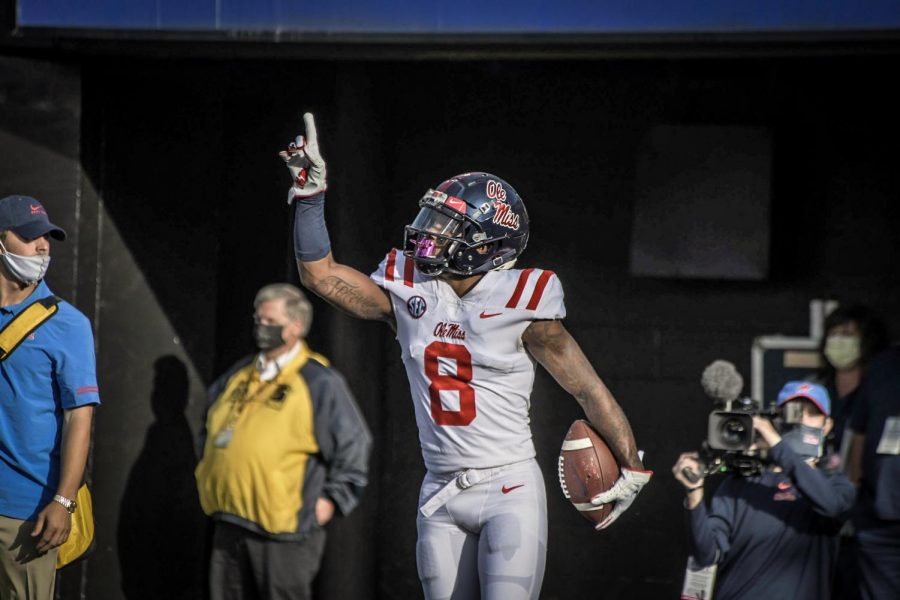 What ensued at Vanderbilt Stadium on Saturday was nothing short of an unmitigated disaster. A record-breaking disaster, in fact. They got thumped. Destroyed. Crushed by the hands of one of the more mediocre teams in the SEC.

Not only did they know that silencing Ole Miss’ offense meant mitigating Moore, but they knew, to a T, exactly what move Moore would try and use.

“Really, he just killed us today with the double moves,” a very sad Dashaun Jerkins said in the postgame press conference, knowing that the double moves were the kryptonite of Vanderbilt’s secondary. “We knew coming in that he would run that, and we just didn’t execute on stopping that. And he beat us on it.”

Jerkins got right to the point. He didn’t sugar coat it. He knew they were “killed” by the Ole Miss offense, led by the very man they were instructed to prevent.

His head coach, on the other hand, saw it differently. They weren’t killed. They were merely “chasing.” Don’t ask me who, what or how they were chasing. I still don’t know.

“We never really found rhythm defensively and chased it all night,” a stiff Derek Mason said in Saturday’s postgame press conference, after his Vanderbilt Commodores lost their fourth straight game, 54-21.

“There really are no excuses,” Mason continued, his hands interlocked in the center of the table at which he sat; his posture ever-so-slightly hunched over; his tone flattened to monotony. “Like I said, we chased it all night.”

“We looked a step slow and just chased it all night,” Mason said for the third time, with the trigger word as meaningless as its first use.

“We chased it, and I’ll say that for the fourth time.” Attribution is no longer necessary. “We found ourselves chasing it defensively, and we just weren’t very sharp.”

The Commodores chased their way to their worst loss of the season on Saturday—maybe not in terms of point differential, but in letting up 587 yards of total offense through just three quarters. Their hopes of being competitive in 2020 have all but disappeared. And for the first time this season, I’ll say what everyone is thinking: will Mason make it to 2021?

The way I see it, if first-year athletics director Candice Storey Lee and first-year chancellor Daniel Diermeier wanted to send a message, he may not even make it through 2020.

Moore also became the first player in Ole Miss history with multiple 200-yard receiving games in a single season. Like I said, this was something Vanderbilt had prepared for. I think.

Moore’s quarterback, Matt Corral, started the game by completing 19 straight passes. 19 in a row! He broke Eli Manning’s 2001 record for most consecutive completions in a game in Ole Miss history. Are you kidding? 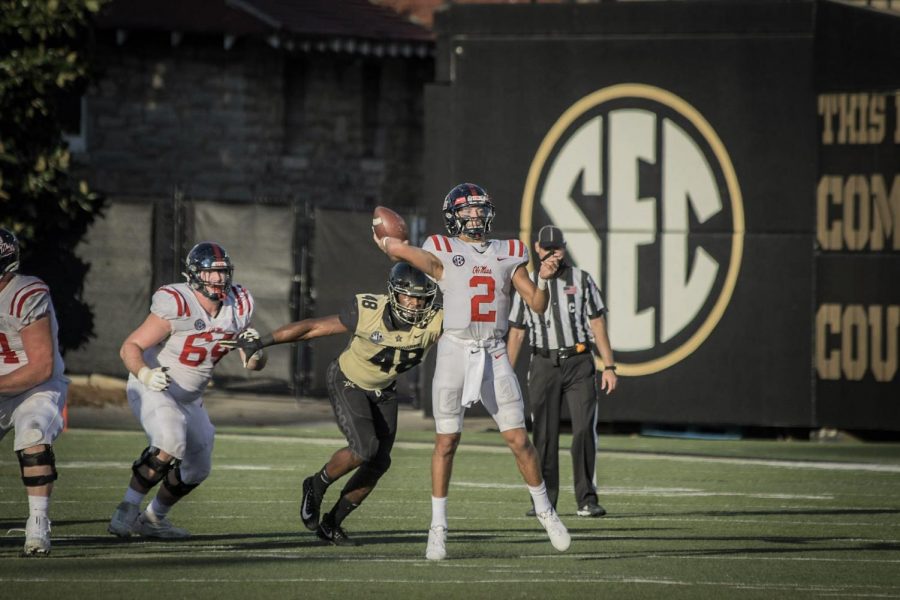 Corral finished by completing a gut-wrenching 31 of 34 attempts for a behemoth 412 yards. He threw for six touchdowns (and his backup John Rhys Plumlee, who has appeared in certain offensive sets, added one of his own). Corral’s six touchdown passes tied Ole Miss’ school record, also set by Eli Manning.

The only difference is that Manning, the soon-to-be NFL Hall of Famer (I will not field discussion on this), needed seven overtimes against Arkansas in 2001 to notch those six touchdown passes.

“We found ourselves unmatched a couple times,” Mason said. “Any time you find yourself chasing plays, big things happen.”

I still don’t know exactly what this means, but yes: when your defensive backs are five or ten yards behind the receiver, chasing him as he frolics untouched to the end zone, then big things tend to happen on those plays.

Why was Vanderbilt running single man coverage to counteract the single best player on the field? I understand the secondary was thin, as regular contributors Donovan Kaufman and Frank Coppet did not dress for the game (likely an aftermath of Vanderbilt’s COVID-19 troubles). But why was there no safety help over the top?

Moore is a great player, don’t get me wrong, I just can’t come to terms with how open he was—every single play. The secondary was terrible. Almost nonexistent. By the time the ball had found its way to Moore, he didn’t have to do much. He was already wide open.

From the moment the ball was snapped, Moore just seemed to have a head start. Vanderbilt was left to merely chase after him.

Vanderbilt was so clearly outmatched in this contest, and that was evident by the first few minutes of the game. Early in the first quarter, when Vanderbilt committed back-to-back-to-back penalties, each of which was more embarrassing than the last, it was hard to think they had a chance of coming back. It was sloppy.

Ole Miss found its way deep into Vanderbilt territory on the first drive of the game, because of course they did. They traveled 71 yards in ten plays but managed to milk just three minutes of game clock thanks to their no-huddle offense. They were knocking on the door of the endzone, and Vanderbilt’s defense seemed to be still catching its breath.

The Commodores lagged behind all game. But in this moment, defending its own endzone, Vanderbilt put the icing on the cake: their defense was flagged for offsides. Ole Miss was already on the one yard line, though. There wasn’t much space for the refs to give.

The next play, Ole Miss lined up on the one yard line—again. This time, they scored, but Vanderbilt was flagged for offsides—again. 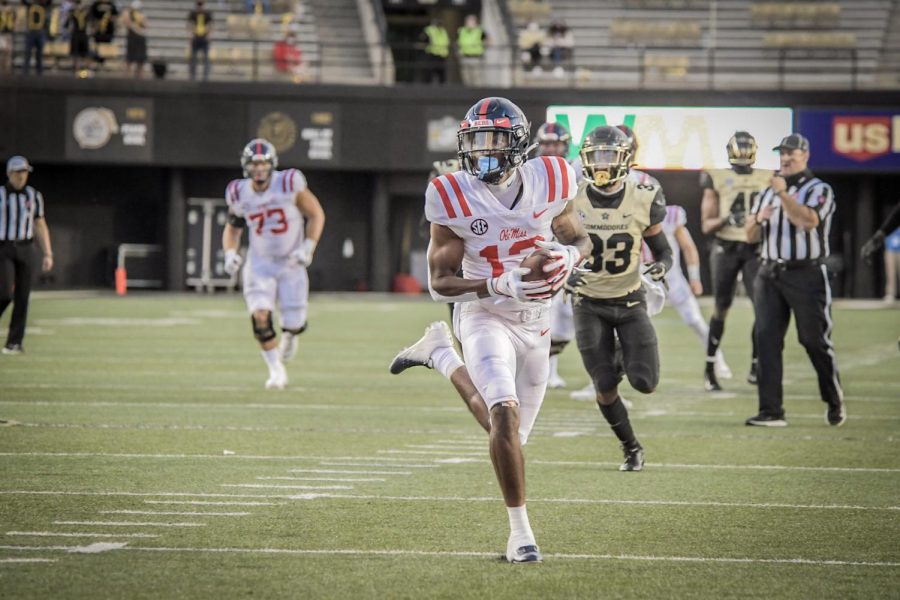 Somehow, the ensuing kickoff was worse. Vanderbilt, who, by estimation, had at most 70-something active players for the game, still had a few sets of duplicate uniform numbers. They lined up to return the kick with both linebacker Michael Owusu, No. 88, and wide receiver Jayden Harrison, No. 88, on the field at the same time.

It was perplexing to hear the words come out of the referee’s mouth. It was funny. And it was sad, too.

It was a 5-yard penalty for illegal participation, as Vanderbilt had two players with the same uniform numbers on the field at once. Owusu then changed to a No. 40 jersey, but the five-yard penalty—a pretty harmless one—seemed like a summation of the game. Everything spiraled out of control after that kickoff.

There actually was a bright spot for the Commodores on Saturday, as Vanderbilt’s offense found a rhythm against Ole Miss’ horrific defense. That said, they lost so terribly that you may not have noticed.

True freshman quarterback Ken Seals threw 40 passes—the most of his young college career—and completed 31 of his pass attempts, while adding 319 passing yards, two touchdowns and just one interception. He went neck-and-neck with Corral at the beginning of the game, completing each of his first ten passes for 100 yards and a touchdown.

“I was coming off the sidelines a couple of times and I was like, ‘I don’t think I’ve missed one yet,’” Seals said after the game, momentarily breaking his stone-faced demeanor to smile. “I was thinking about it. I had my first incompletion—it was a throwaway. I probably could have stepped up in the pocket, made a read and got the ball out.” 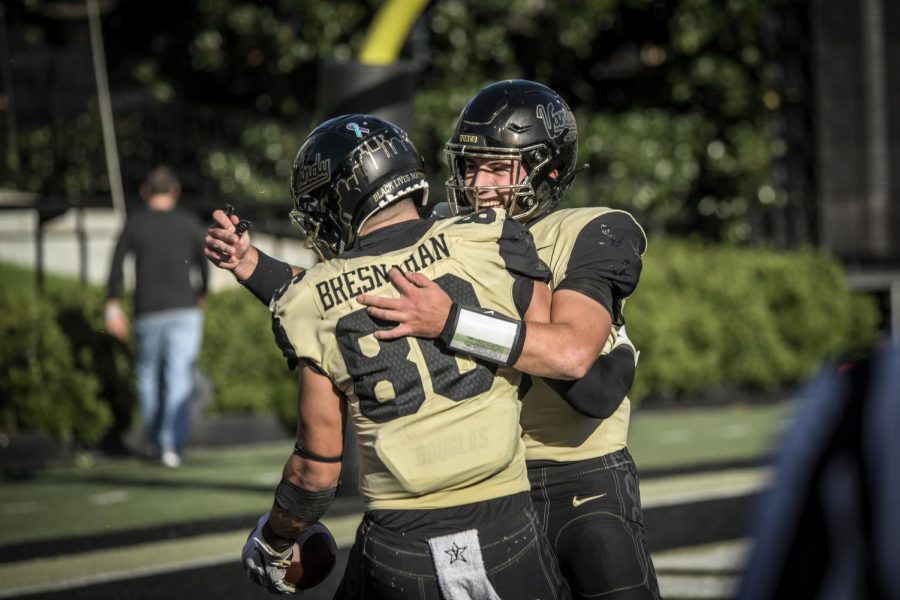 Coach Mason seemed impressed by his quarterback’s growth, noting it as the only bright spot in the opening statement of the postgame press conference.

“Offensively, it was great to see a good Ken Seals,” Mason said. “A young Ken Seals continues to grow up. He’s doing a terrific job. He’s growing into the quarterback we need him to be. I saw some advancement from our offense.”

Credit to Seals for sticking it out this game. Credit to Seals for being competitive, for chugging along, for playing like it was a tie ballgame—even when it was far from it; even when, on Vanderbilt’s last possession of the game, he found an open teammate way down the field, only for Keyon Henry-Brooks to have it ripped right out of his hands.

You can’t help but feel for Seals, though, who had the best game of his career; he found Cam Johnson 14 times, Ben Bresnahan six times, Henry-Brooks five times and Chris Pierce four times. He became the first Vanderbilt quarterback since September of 2019 to eclipse 200 passing yards and the fourth quarterback under Coach Mason to throw for at least 250 passing yards. He also set the record for most passing yards by a Vanderbilt true freshman and still, somehow, wasn’t even close to the story in this game.

Seals was certainly competing. Just not sure about the rest.

The Vanderbilt Hustler welcomes and encourages readers to engage with content and express opinions through the comment sections on our website and social media platforms. The Hustler reserves the right to remove comments that contain vulgarity, hate speech, personal attacks or that appear to be spam, commercial promotion or impersonation. The comment sections are moderated by our Editor-in-Chief, Rachael Perrotta, and our Social Media Director, Chloe Postlewaite. You can reach them at [email protected] and [email protected]
All The Vanderbilt Hustler picks Reader picks Sort: Newest
Subscribe
Login
3 Comments
Newest
Oldest Most Voted
Inline Feedbacks
View all comments
D
Doug Dean

Truman McDaniel: Really nice photos! Especially the one above the headline. (And i’m a Vandy fan.) Excuse me while i go chase…

Simon I thoroughly enjoy your articles. Your writing reminds me of Jason Gay. I find myself nodding in agreement and occasionally laughing out loud. It’s nice to know that at least someone at my alma mater recognizes a dumpster fire when he sees one and isn’t afraid to call it out.