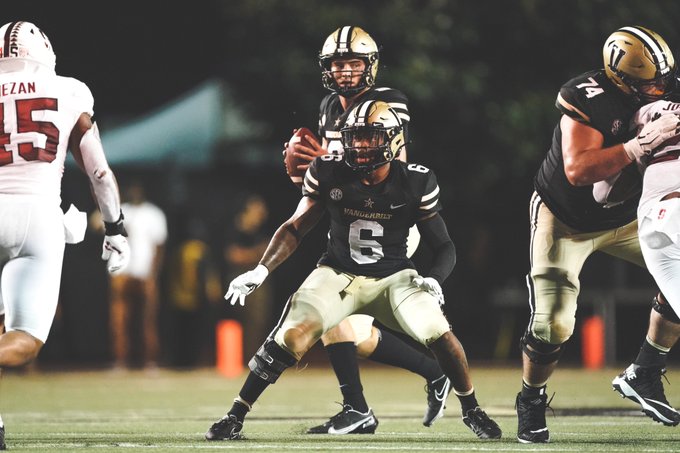 Vanderbilt fell to Stanford 41-23 on Saturday for its second loss of the season. (Vanderbilt Athletics).

The Vanderbilt Commodores entered Saturday’s matchup against Stanford looking to build a win streak. Despite 1 ½ solid quarters of play, they were bested 41-23 by the Cardinal.

For the first time since 1961, the Vanderbilt Commodores battled a Pac-12 opponent in Week 3. The peculiar matchup featured a pair of top-15 academic universities and it was Stanford that pulled away from the Commodores 41-23 in the first-ever meeting between the teams.

It was quite a mixed bag from Vanderbilt on Saturday. A high-powered offensive attack in the first two quarters was a refreshing sight to Commodore fans. Multiple, ten-plus play drives yielded touchdowns and despite nearly 20,000 empty seats, energy filled Vanderbilt Stadium early in the contest. Ultimately, the Cardinal demonstrated their dominance in the trenches towards the middle of the game to pull away from an at-one-point feisty bunch of Commodores.

“Obviously we have to get synced up in all three phases of our game to have a chance to beat tough opponents. When the offense was playing well, the defense wasn’t quite holding the line. When the defense was playing well the offense couldn’t get in rhythm,” head coach Clark Lea said. “In the kicking phase we allowed too many returns and had too many penalties. You aren’t going to beat good teams doing that.”

Stanford is far from a great team this year, but the Cardinal dominated both lines of scrimmage, played to their size advantage, capitalized on Vanderbilt miscues and took care of Lea’s squad handily. Twenty Cardinal points in the final 1:53 of the second quarter and first 3:42 of the third quarter were no match for the 1-1 Commodores.

There are certainly positives to take away—and we will start with those—but this weekend ends with a scary realization: the No. 2 Georgia Bulldogs are up next. So eat up the positives while you can, Commodore fans.

Stanford’s opening drive of the game looked rather similar to weeks past. After surrendering a quick, five-play, 75-yard drive to open the game last weekend against Colorado State, the Vanderbilt defense allowed Stanford to do one better.

The Cardinal only needed four plays to go 75 yards and punch in a score. But for a single 87-yard run last week, Stanford has averaged under two yards per carry this season. Commodore fans would not have known that on the first drive though, as a 61-yard gallup from Austin Jones set up an easy scoring run for quarterback Tanner McKee. 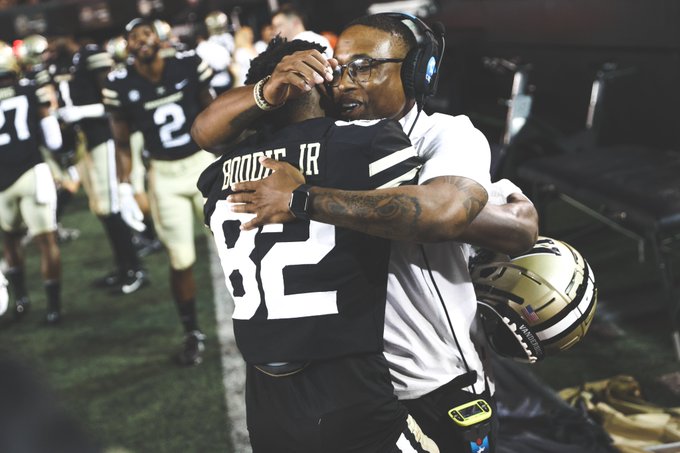 Despite the abysmal start, the next 26 minutes of game action were nothing but fun as both teams traded punches. The key to the Commodores’ start was no doubt establishing the running game, something the Commodores were able to do right from the get-go. Seven rushes of five or more yards from three different runners—Re’Mahn Davis, Rocko Griffin and Ken Seals—helped Vanderbilt explode for a 14-play, 75-yard touchdown drive on its first possession.

The holes looked bigger, the runners looked more confident and the game plan was downright impressive. With a bit of tempo and plenty of dink-and-dunk passing, the Commodores were able to create manageable third-down situations and keep the chains moving. Vanderbilt converted four of its first six third downs in the first half—a crucial part of the team’s early success.

The head coach credited his offensive line for continuing to gel, which was made evident by the additional time Seals had to throw and the better holes for Commodore tailbacks.

“What’s happening for us is we are getting better. And that’s a product of the work we are putting in. It didn’t show up in the result tonight but that’s what you are seeing,” Lea said.

Defensively, the Commodores played with plenty of energy. The defining play of the half was a huge goal-line stop that sparked Vanderbilt’s second 75-plus yard drive of the half. After a third consecutive drive of 60-plus yards from the Cardinal, Alex Williams and Ethan Barr combined on a crucial fourth-down stand to turn the ball back to Seals and the offense.

The sophomore signal-caller then proceeded to march his team down the field, going 14 plays and 98 yards in over seven minutes. A 34-yard burst from Griffin was followed up by a 26-yard scurry from Davis to set the Commodores up in the red zone before Seals lofted a beautiful ball to Devin Boddie Jr. for the junior’s first touchdown in the Black and Gold.

The balanced rushing attack and tempo yielded terrific results for the Commodore offense. If you watch quite closely, you will also notice that the timing between Seals and his pass-catchers continues to improve. The ball is arriving just as receivers are curling, pivoting or turning back for catches and it is encouraging to see such visible signs of chemistry building.

The first 28 minutes of this game were simply enjoyable. It was solid, competitive football that captivated students and fans. The next 32 minutes? Well, not as captivating.

Despite the positives on both sides of the ball in the first half, a number of key miscues—and a devastating injury to Davis—paved the way for Vanderbilt’s second loss of the season.

The turning point of the game was no doubt a sloppy Seals interception with 1:22 left in the first half. After getting the ball back down just three points with possession coming their way to begin the second half as well, the Commodores had a chance to turn the tide of the game and enter the locker room tied or in the lead.

Instead, after a Stanford field goal, Seals lofted a ball way in front of Chris Pierce and the Cardinal forced the first and only turnover of the game. 42 seconds later, Stanford converted the pick into seven points, growing its lead to 24-14.

Following the ensuing kickoff and three brutal offensive plays from the Commodores, Stanford received the ball right back with five seconds left. Harrison Smith booted a 38-yard punt that was returned all the way to the Commodore 22-yard line.

Why was Vanderbilt unable to prevent the huge return? Well, it had too few players on the field. Not only did that result in the big return, but it tacked on five extra yards for an illegal formation, setting up a Stanford chip shot field goal to enter the locker room 27-14.

With 11:18 to go in the third quarter, Stanford had scored again and in a matter of five minutes of game action, the Commodores found themselves down 34-14 after trailing by just three late in the first half.

“What a disappointing chain of events,” Lea said. “It’s a team that doesn’t yet know how to put it away. We had a chance to take all the momentum into half and come back into possession in the first possession of the second half. It’s brutal.”

Brutal is right. This sequence was nothing but painful for Vanderbilt fans, but it wasn’t the Commodores’ only set of blunders.

For as clean as the Commodores’ special teams had played in Weeks 1 and 2, they surrendered an average of 20 yards on five punt returns and 36 yards on a pair of kick returns. Lea’s group also notched seven more penalties this week for 66 total yards.

Stanford flexed its SEC-caliber size and speed advantages on the Commodores, reminding fans that despite culture changes, this roster still demands much attention in the coming years. The Cardinal averaged 7.5 yards per play, prevented any sacks until late in the fourth quarter and did not surrender a single turnover—something Vanderbilt opponents have done just once this season.

Another miscue in and of itself? Cam Johnson didn’t catch his first pass until 10:33 remaining in the fourth quarter. Failure to get one of your best playmakers involved earlier is a simple miscue that Lea and play caller Joey Lynch will need to work out moving forward.

Vanderbilt has opened as 31-point underdogs against Georgia this coming week. That should surprise absolutely no one. But what this team has shown in the first three games, is that regardless of the opponent, they will fight until the end.

Mike Wright entered the game in the fourth quarter and led a clean, eight-play, 75-yard drive for Vanderbilt’s final score of the game. This team could have thrown in the towel, but they didn’t and cut into the deficit despite not standing a chance at that point in the contest.

Are the days of getting run out of SEC stadiums left and right over? Will these Commodores battle despite trailing? That’s what fans should look for this coming week.

Fans can also look forward to a Week 5 matchup with UConn. The Huskies have now lost each of their first four games by a scoring margin of 184-49. Most recently, they were blasted by Army 52-21 this past week.

Vanderbilt should destroy this team. Regardless of how next week goes, Commodore fans can certainly look forward to this one.