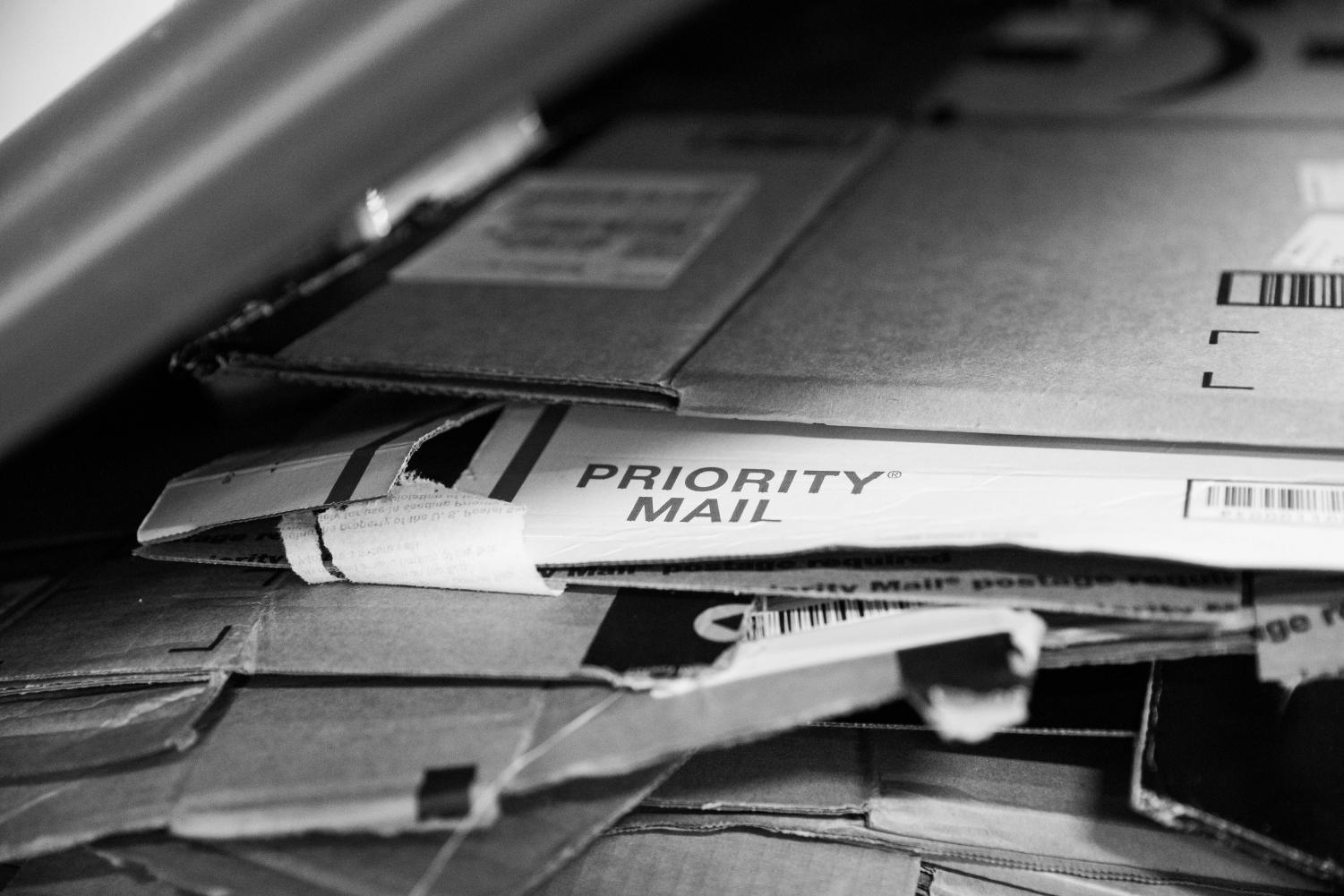 This year, due to COVID-19, a historic number of Americans will be voting by mail. (Hustler Multimedia/Emily Gonçalves)

THORNTON: Amid the season of frights, attempting to scare people into voting isn’t the answer

Of the actions you take to turn out voting in this election, striving to shame nonvoters into voting between racism and white supremacy shouldn’t be one of them.

As leaves turn the colors of warmth and the weather turns cold, November approaches like the creeping autumn. Election Day draws near, and the Halloweeny month of October turns spookier by the day. And we’re only on day four. September’s epilogue was the first presidential debate: a distressing argument between two racists. While President Trump urged white supremacists to watch the polls and “stand back and stand by,” Biden echoed his regular sentiments of police brutality apology: blaming departments’ “bad apples,” while disacknowledging purposefully racist systems. 2020’s plot took a staggering twist in October, as the last act of the year started off with a bang: the President contracted a deadly virus, and horrifying questions emerged about what will become of the rest of his administration.

What a perfect beginning to the season of frights.

Each month of 2020 has felt like a movie in those horror marathons that sweep across TV channels like witches on broomsticks as soon as the calendars mark Oct. 1. Some were funny “Scary Movie”-esque episodes, like Donald Trump’s inevitable impeachment. Others were psychological sci-fi thrillers, like the pandemic that’s worsened in America over the past few months. And some were reminiscent of “Get Out” and other painfully accurate realistic horrors, like what NPR has titled “The Summer of Racial Reckoning” and The Guardian the “Reign of Terror.” The prospect of a hopeful ending to the 2020 movie series continues to dim. This November, I’ll stomach my guilt as I cast a ballot for someone I believe to be a racist and his “top cop” running mate, both of whom have made significant contributions to the prison-industrial complex. My vote will be cast in a feeble effort to use the system against what many have called a looming fascist regime.  Straight out of a horror movie, right?

Democrats have gone as far as to say that “Democracy is on the ballot.” While we in no way live in a democracy, vote shaming nonvoters as a way to fight against feared fascism could easily feel like the righteous thing to do. Yet, vote shaming not only undemocratically attempts to reframe voting as a duty, not a right, but it asserts that those who don’t vote deserve the injustices that come as a result of ignoble leaders and purposefully ignoble systems.

Moreover, vote shaming is fundamentally unproductive. For one, it coerces people who may be uneducated on the candidates (outside of the president) to vote. But more importantly, vote shaming pretends that abstention is not the byproduct of a racist and capitalistic two-party system. The majority of nonvoters, including those who are educated and purposeful in their abstention, aren’t privileged, aren’t affluent and aren’t white.

While voting may be the primary means of social change for some, any enfranchisement of the oppressed is itself a product of both protest and effective elected officials. The validity of the voting itself is debatable because an electoral system put in place for the purpose of my enslavement and my later subordinacy will not be the source of my liberation. And while I plan to vote in the upcoming election, condemning nonvoters, especially those who actively fight for liberation through means such as organizing and protest, would assume a sole power of voting that it does not have.

A 2019 study found that even violent protest pushes towards social change, citing the Los Angeles 1992 riots as a primary reason for the aftermath of less hostile police practices on a local level, as well as a likely source for the increase of voter mobilization after. On a broader scope, when Roe v. Wade almost fell 28 years ago, protests preserved my modern right to an abortion. It’s sick that recent gun reform is moreso a product of protests like March For Our Lives than it is the literal killing of children that prompted the protests.

The last question I’d like to pose is, do you think that any shift in Biden’s plans to work towards economic, social and racial equity would have occurred without years of modern organizing and the current protests that have been happening all summer?

Oppressors don’t simply halt their oppression on the whims of moral consciousness.

“Don’t boo–vote” was President Barack Obama’s favorite saying on the campaign trail. After hearing the pitiful indictment that was supposed to bring Breonna Taylor justice, I’m reminded that not only is Louisville in a now-blue state with a Democratic governor, mayor and majority city council, but I’m reminded that Black Lives Matter had to form under the Obama administration after the lynching of Trayvon Martin. Kamala Harris, our prospective vice president and former attorney general, couldn’t even confirm that if she were in the position, she would have charged the officers that killed Breonna in her sleep. The primary reason people don’t vote is “a belief that election outcomes do not matter because both parties are corrupt.” Voting Democrats, especially Black Democrats, into office was not only supposed to bring Breonna and every other victim of police brutality justice, it was supposed to stop it from happening in the first place. And yet, it didn’t.

As Vox reports, the democratic platform on police reform is the most progressive in history, yet “it contains no mechanisms to hold police departments accountable to those changes besides saying that Democrats will ‘work with police chiefs’ to do so.’”

While reform will never be enough, 2020 is the first year that the Democrats’ platform on it has reached the bare minimum. Yet, vote shaming and telling the marginalized that we must vote for the bare minimum, pretends that it is not.

Turning out the vote will not be accomplished by vote shaming a people that voting has failed to liberate.

Voting is not my civic duty, and it does not make me a “good American.” Voting is not something my ancestors died for, as many will constantly preach; it is a supposed inalienable right that my ancestors were begrudgingly given after protest when what they were asking for was liberation. Voting has yet to give it. Voting is simply something I chose to do because it is one of the many mechanisms I think can begin to push us in the direction of change, but it cannot actually enact that change alone.

If you truly want to turn out the vote this November, telling the marginalized and progressives to “Settle for Biden” and to ignore their morals and the guilt that I’ll feel when I cast my ballot is not the answer.

The answer is helping people who already want to vote. Across the country, only 40 percent of polling locations have disability accommodations, and one-third of disabled voters report difficulty voting. One in 13 Black voters cannot vote due to disenfranchisement laws. A devastating 70 percent of Georgia voters purged in 2018 were Black. Fewer polling sites exist in low-income and minority counties like mine. And in terms of the student vote, specific voter ID laws are put in place in states like Tennessee to suppress it.

Vote shaming is not activism, but helping those to want to vote but are barred from doing so is. Volunteer at polling places (especially in Black and Latino neighborhoods) this year when it’s more dangerous for senior poll workers to. Drive disabled and elderly people to polls or mail in their ballots for them. Join a registration organization in your community or on campus. Advocate and protest against methods of voter suppression and civic death tactics like felon disenfranchisement and other modern-day Black Codes. And most importantly, don’t stop protesting injustices if and when the bare minimum is in office.

There are a plethora of actions you can take to turn out the vote, especially if you are an able-bodied person, that do not involve vote shaming those who are valid in their refusal not to vote because they’d rather enact change in other ways. Nonvoters do not “deserve” injustices that happen in this country. To act as if the marginalized or any American deserves the inequities enacted on us because they chose not to participate in a system that’s failed us minimizes the impact and scope of oppression. Unless you are actively trying to work against voter suppression and the reasons nonvoters abstain, your constant screaming of “Go vote!” is just an excuse to condemn the marginalized while masquerading as an activist. You instead become a perpetrator of the horrors that 2020 has already unleashed.