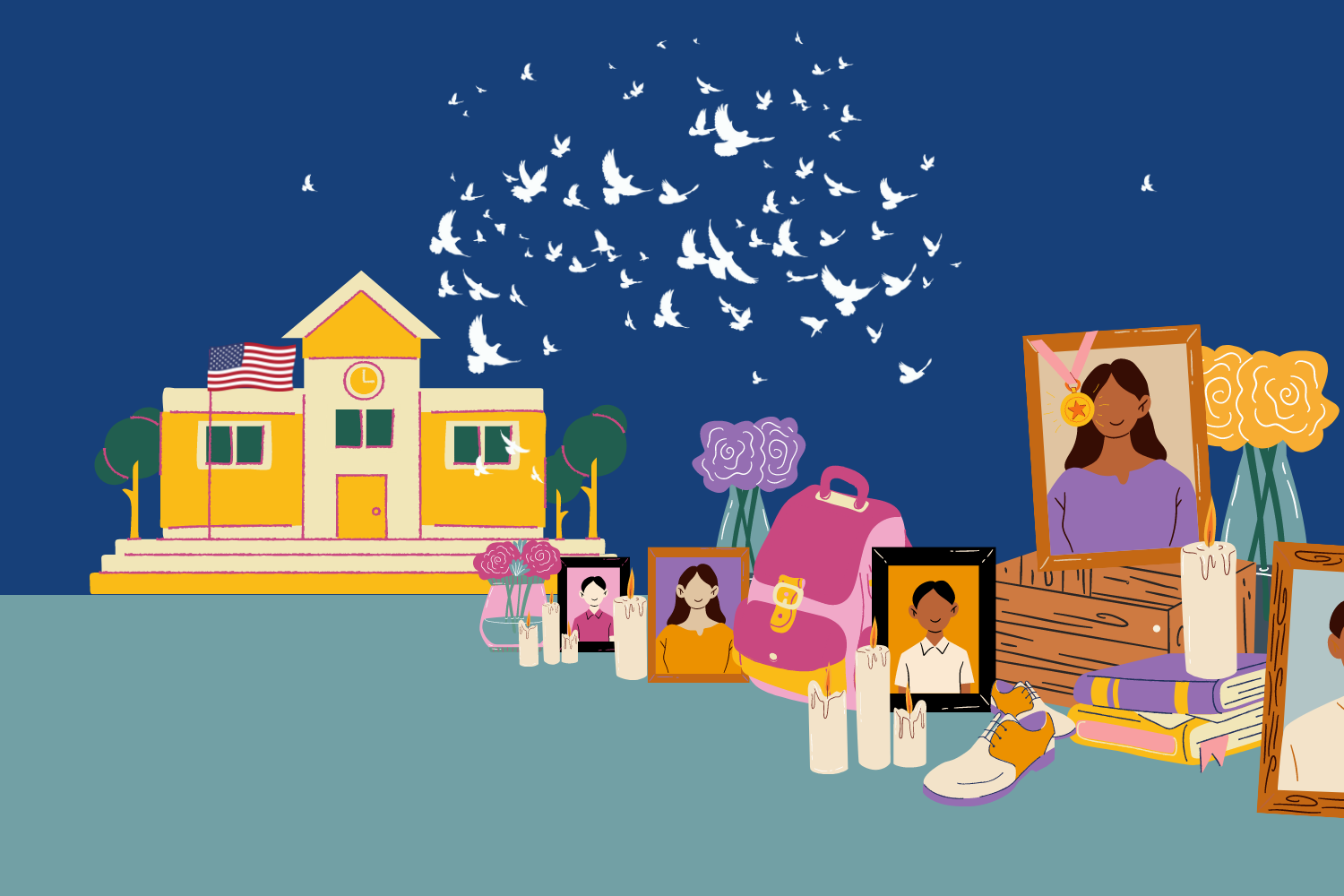 Graphic depicting a memorial of young children killed in their elementary school classrooms in Uvalde, TX on May 24, 2022 (Hustler Multimedia/Alexa White). (Alexa White)

Graphic depicting a memorial of young children killed in their elementary school classrooms in Uvalde, TX on May 24, 2022 (Hustler Multimedia/Alexa White).

ABEL: Why are we preparing to die?

How many more of our classmates have to be murdered before our leaders will do something?

I texted my parents from underneath a table at a restaurant where my friends and I were huddled with hundreds of others. We had been downtown for the D.C. Pride parade when a mass of people charged toward us, yelling and knocking down metal barriers in their path. One woman screamed about gunshots as she climbed over a metal barricade. I searched frantically for my friends and little sister as I ran up the street.

It was a false alarm, a mass panic, a man with a BB gun who threatened to shoot another man. The crowd thought noises caused by the falling metal barriers were gunshots.

Videos from above showed a street full of thousands of parade-goers screaming, running and hiding behind cars. Conditioned to expect shootings every day in our schools, churches, theaters, grocery stores and hometowns, our first instinct was to run and panic. Even at a celebration of love and joy, we weren’t surprised that someone wanted to hurt us.

My sister and I—and the thousands of people gathered there that day to celebrate–were unharmed. My parents have all three of their children safe at home every night when they go to bed.

Conditioned to expect shootings every day in our schools, churches, theaters, grocery stores and hometowns, our first instinct was to run and panic.”

I didn’t want to write about school shootings. I tried to tune out the news, go for a walk, talk about anything else. But every few months there is the same headline, the same sinking feeling, the loss of American children. When asked if we were going to cover gun violence, I hoped someone else would do it. I didn’t possibly know where my voice, my sadness, or my grief played a role in this story because I am one of the lucky ones.

When I was 10 years old during a lockdown drill in my Virginia elementary school, I decided I would pretend to be dead if a shooter came.”

We are the generation that grew up with lockdown drills. We stuck a black piece of paper over the rectangular window on the classroom door. We knew our school code words, had action plans and knew there were people out there who wanted to hurt us. Even as we sat there behind the teacher’s desk or in cubbies, we knew not to poke each other or giggle. We knew the hand jiggling the doorknob and yelling “let us in” was the principal and the security officers pretending to be someone who wanted to hurt us. We are the generation who knows that you are supposed to run in a zigzag when someone is shooting at you.

When I was 10 years old during a lockdown drill in my Virginia elementary school, I decided I would pretend to be dead if a shooter came. I knew I wasn’t as fast as the other kids, but I was on the swim team and thought I might be able to hold my breath for longer. In Uvalde, eleven-year-old Miah Cerrillo smeared her best friend’s blood on herself and pretended she was dead. Her classmate died and saved her life. This didn’t happen in a war zone but, instead, in her fourth-grade classroom.

The fourth-graders in Uvalde had been watching “Lilo and Stitch” when they were brutally murdered. Instead of worrying about being invited to birthday parties, making friends and who to play with at recess, elementary school students are learning to play dead to avoid school shooters.

There is a vast difference between the rite-of-passage experience in which a young boy and his granddad go deer hunting with a family rifle and the purchase of a weapon of war. Although I do not personally believe that it is a cultural rite of passage to own a gun, I understand the impossibility of banning guns. I am not advocating for storming into the house of every gun-owning American and throwing them into the ocean. I am not telling everyday law-abiding citizens to give up their guns.

There is only one way to honor all the children and school staff who have lost their lives to gun violence—inside and outside the classroom—and that is with gun reform.

Let’s treat our guns the same way we register anything potentially dangerous–our cars, controlled explosions, infectious diseases. Let’s ban assault-style weapons and high-capacity ammunition magazines that hold more than 10 rounds. Let’s create a federal database to track gun sales, the same way we have a federal database to track demographic information, crime statistics and even flu cases. Let’s raise the minimum age to purchase a gun from 18 to 21, just as Florida did after the mass shooting at Stoneman Douglas.

Polls are clear that a majority of Americans support many gun-control measures, including universal background checks and assault-weapons bans. A majority across both sides of the political divide–85% of Republicans and 90% of Democrats–favor policies that would prevent those with mental illnesses from purchasing guns. In a Gallup poll after the Buffalo and Uvalde mass shootings, the percentage of Americans satisfied with the nation’s gun policies dropped from 20% to 13%. Those who were dissatisfied preferred that laws be stricter.

In twenty years, will my son also be asked to tape black paper over the rectangular classroom window and huddle in cubbies with his friends? Will my daughter also decide to play dead in the event she is in a school shooting?”

Let’s make it more difficult for an 18-year-old in Texas to buy assault rifles–as the Uvalde shooter did the day after his birthday. Let’s follow the lead of our Canadian neighbors. After the Uvalde school shooting, Canada implemented Bill C-25, which expanded background checks, banned 1,500 types of military-style assault weapons, started a buyback program and required rifle magazines to be permanently altered to never hold more than 5 rounds. This new legislation initiated a freeze on handguns, making it near impossible to buy, sell and transfer handguns in the country.

“Gun ownership is a privilege and not a right,” Canada’s Minister of Emergency Preparedness Bill Blair said, adding that in contrast to “our colleagues and friends to the South…guns are only intended to be used for hunting and sport purposes.”

I moved to Texas two years ago and am spending my summer interning in an emergency room. A decade after my vow to play dead during a school-shooting drill, I am still confronted by the realities of gun violence every single day. I have already seen more shooting victims brought in by ambulance in the past week than I imagined possible in a lifetime. In Texas, women are 24% more likely to be murdered with a gun than women in other states. It is impossible to live in this state, to work in healthcare and to exist as an American and a woman without exposure to gun violence.

I don’t want my future children to grow up the same way I did. In twenty years, will my son also be asked to tape black paper over the rectangular classroom window and huddle in cubbies with his friends? Will my daughter also decide to play dead in the event she is in a school shooting? Will politicians still be unable or unwilling to adopt any laws that will keep my future children safe?

Governor Abbott, Senator Cruz, President Biden, leaders in Congress–how many more of our nation’s children have to be murdered before you will do something? Not promise to do something, extend your condolences and then move on to the next catastrophe.

How many more of our classmates have to die before anything changes?

The Vanderbilt Hustler welcomes and encourages readers to engage with content and express opinions through the comment sections on our website and social media platforms. The Hustler reserves the right to remove comments that contain vulgarity, hate speech, personal attacks or that appear to be spam, commercial promotion or impersonation. The comment sections are moderated by our Editor-in-Chief, Rachael Perrotta, and our Social Media Director, Chloe Postlewaite. You can reach them at [email protected] and [email protected]
All The Vanderbilt Hustler picks Reader picks Sort: Newest
Subscribe
Login
4 Comments
Newest
Oldest Most Voted
Inline Feedbacks
View all comments
B
Belinda S.

Wow. Well-said and incredibly well-written. Kudos to the author for taking on such a difficult topic with grace. The author’s inclusion of her own experiences with mass panic and gun violence shows that none of us are immune. None of these things happened when I was a child in the seventies- I fear for what is next for this generation.

This is one of the most balanced and intelligent articles about the topic of gun reform that I have seen so far. I am one of those Americans who owns guns (I have three), who hunts regularly, and who has spent three years of active duty and eleven years of reserve service in the U.S.Army Infantry. I know some things about guns. They are useful, generally safe and effective in the hands of knowledgeable users. I am happy and proud to have a constitutional right to own and use my guns properly.
However, I also am a father and a grandfather, and I can perceive and appreciate the pathos in the author’s arguments. Moderate voices such as those mentioned here deserve a better response than the practically toothless bill recently passed by Congress. Yes, the Senators can now boast that they have “done something…about,” or “have taken an important step toward...,” real gun reform, but until we can reassure our author that she no longer has to worry about her children or we, as a nation, have to worry about all the children needing to learn how to shelter in place or play dead, there has been no significant reform. Alas!

Guns have always been around. The problem lies in a society that is producing people who want to kill and hurt others. When they don’t have guns, they use other means, vehicles, knives, bombs, etc. These unstable people WILL find a way. GUNS are not evil – it is the intent of the user. How did our society come to this point? Why are so many so full of hate and pain? When I was in school (back in the dark ages) the parking lot was full of pickups with rifles on the rack) but we never had shootings. Maybe we need to study each individual that is committing these types of mass crimes and see what the common factors are instead of jumping on the bandwagon and screaming guns, guns are killing our kids. It is people killing – NOT guns. Just like the group panicked in your story when they heard the barriers falling over and someone started screaming gun – don’t join the mass hysteria – seek the true problem. Why have people become so violent…..