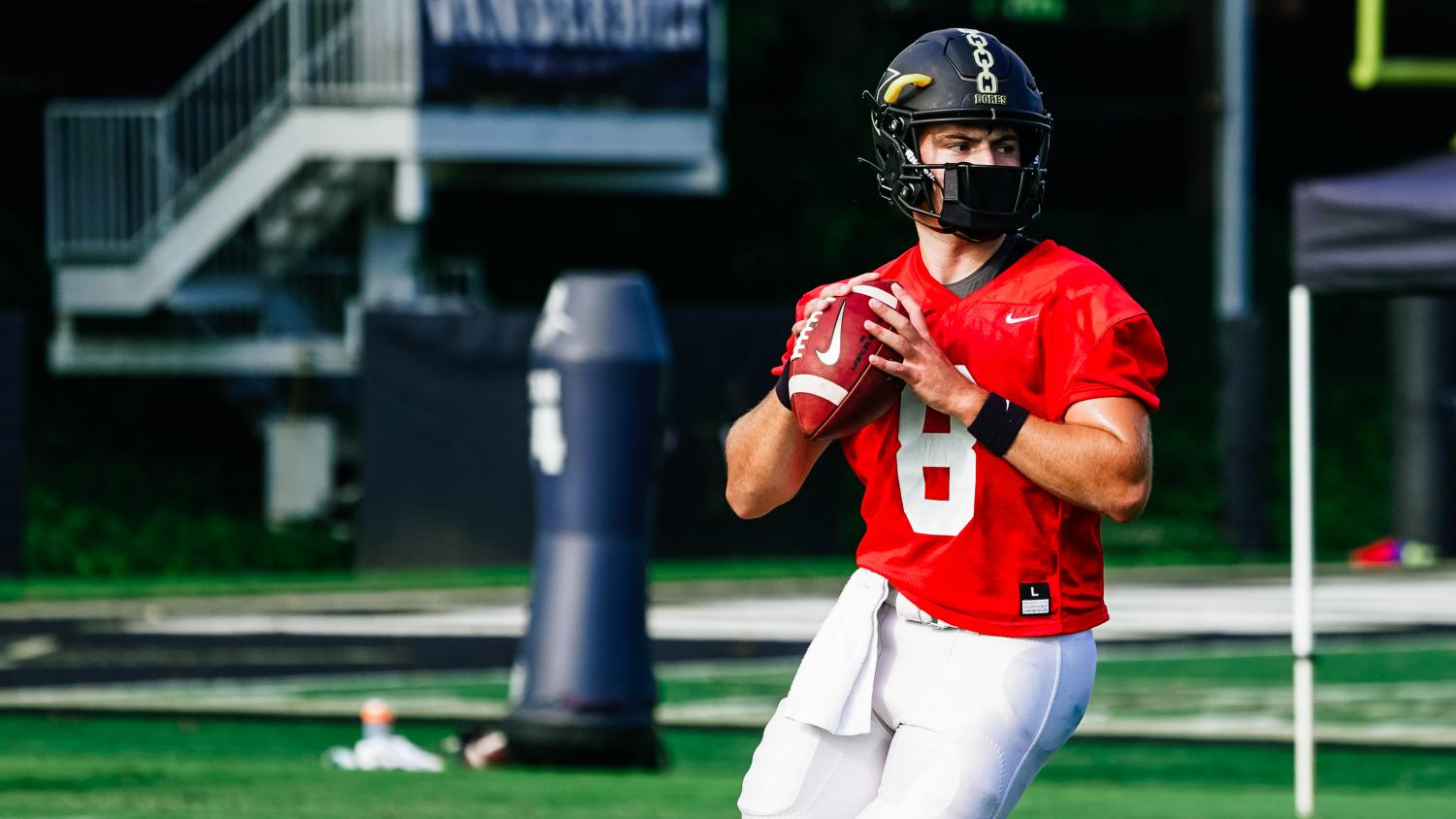 QB Chronicles: Ken Seals is ready to make a splash as a true freshman

Ken Seals’ 5,714 passing yards and 53 passing touchdowns are school records at Weatherford High School, despite only playing two years as a starter.

Weatherford, Texas is home to about 35,000 people but still has a bit of a small-town feel to it. And in this “small town,” it seemed like everyone knew of Ken Seals, the Weatherford High School star quarterback who set the school record for both passing yards (5,714) and passing touchdowns (53) during his senior year. His success on the field led Seals to gain a bit of a local celebrity status, according to his high school coach Billy Mathis, and he often received autograph requests from young kids all the way up to 60 and 70 year old men.

This year, Seals has made the long trek from Texas to West End with dreams of becoming the next great Commodore quarterback.

Seals, a three-star prospect per Rivals, committed to Vanderbilt on April 3, 2019. He says he was drawn to the university’s top-tier academics, something that is a big emphasis within his family, in addition to the opportunity to compete in the SEC.

Vanderbilt’s first quarterback commit of the 2020 class, Seals now is part of a crowded quarterback room that includes fellow freshman Mike Wright and junior transfers Danny Clark and Jeremy Moussa. All four guys are in the midst of a battle for the starting position, but Seals doesn’t let himself get caught up in the heat of the competition.

“Obviously all of us are fighting for a job,” Seals says. “We all want to play, but at the end of the day, we’re all just playing football. I think that all of us are doing a good job of learning from each other.”

Seals adds that he has learned a ton already from Clark and Moussa, who each have prior collegiate experience.

“They’ve kind of been around the game for a couple years now so having those older guys to kind of take you along and show you how it’s done [is huge].”

In hopes of getting a headstart on the transition to collegiate football, Seals enrolled during the 2020 spring semester. Unfortunately, that experience did not turn out how he hoped as the student body was sent home due to the COVID-19 pandemic shortly after spring practices began.

“It was short-lived,” Seals says of his time in the spring. “I kind of got to get my feet wet. It wasn’t like I was in the pool swimming around. I just got to test the waters, see how it was. I kind of dabbled in it. Obviously the goal coming in early is to get some experience, get some time in before the clock actually starts, and you start using your eligibility.”

Without the added benefit of the spring semester, Seals will have to rely on his experiences at Weatherford High School as he battles for the starting job. As a junior, Seals took over a 0-10 team and brought them to a 4-7 record. The following year, the team went 7-4 and earned their first playoff appearance in 12 years. Seals recorded 3,060 passing yards and 33 touchdowns in addition to seven rushing scores during this senior season.

Seals will be faced with a similar task during his career at Vanderbilt, as the Commodores are coming off of a disappointing 3-9 2019 season, including a 1-7 performance in conference play.

“He knows what it takes to get a program that has struggled at times and turn that program around,” Mathis says. “A guy like Ken thrives on that type of challenge.”

During his time at Weatherford, Seals was admired for his hard work and for being a superb practice player.

“Teammates respected him; they loved him for that,” Mathis says of Seals’ work ethic. “A lot of Division One quarterbacks are kind of prima donnas. He was the opposite of that. He was the hardest worker that we had.”

Mathis also noted Seals’ impressive ability to always have teammates lined up in the right position, a trait that Seals and his dad attribute to him being the oldest of three siblings.

Seals credits his father with kick-starting his football career at a young age.

“When I was little, he was the one driving the boat on my career,” Seals says. “But as time went by and I kind of saw what exactly I was supposed to be doing, I was kind of able to take it over.”

Even though he’s away at college and managing his own future, Seals still makes time to Facetime his dad three times a day to catch up.

He is now finding a home on West End and getting acquainted with a brand new offense under first-year offensive coordinator Todd Fitch. Seals was recruited by former offensive coordinator Gerry Gdowski, who was fired in December 2019, so he did not have much of a relationship with Fitch prior to enrolling in the spring. Now that he has had a chance to experience the new offense, however, he couldn’t be happier to be playing under Fitch.

“It’s a fun offense to run,” Seals says. “The guys that I’m playing with all agree. This is the type of offense you’d wanna play in if you wanna score some points. I think all of our guys are buying into it. We’ve really had fun at practice learning it, getting the hang of it.”

Fitch has been impressed by Seals as well, specifically noting his arm talent and grasp of the offense.

“His overall feel for what’s going on in the offense, where all the moving parts are going, is really pretty good for his age and his experience level,” Fitch says. “He’s a pretty accurate thrower. When you chart him, he’s throwing the ball pretty accurately.”

With all the uncertainty surrounding this season due to the pandemic, Seals has no idea what to expect out of this year. He does, however, plan to take full advantage of the NCAA statute that grants an extra year of eligibility to all fall athletes, regardless of whether or not they choose to play. This rule essentially gives Seals the opportunity to play five seasons at Vanderbilt if he so chooses.

“I just see every bit of experience and every bit I’ve been learning is a bonus,” Seals says of this year. “I wanted to get here in the spring so I could get some reps and I could get a little bit of playing time behind the line and see it so I could get that work in before my clock started. I see it now as ‘the clock still hasn’t started.’ It doesn’t start until next academic year. I think that’s really huge for me to be able to get that experience.”

While Seals is incredibly excited about the long-term prospects of his time at Vanderbilt, he is even more passionate about making sure this season is a good one for the Commodores.

“I’m going to do whatever I can to make sure these guys, especially fourth- or fifth-year guys, leave this place knowing they gave it all they had and they ended it the right way,” Seals says. “That’s important for me because I know that was important for me when I was a senior in high school.”

Vanderbilt’s starting quarterback for this year is yet to be announced. But one thing is for sure: Commodore fans will be hearing Seals’ name on West End for years to come.