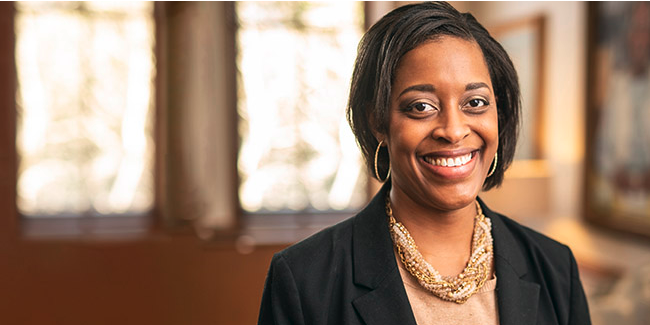 Candice Storey Lee has served in the Vanderbilt Athletics department since 2004, and she should be here a whole lot longer.

When Malcolm Turner abruptly resigned on Feb. 4, it felt like Vanderbilt Athletics was going up in flames. Football was coming off a miserable 3-9 season, and the men’s basketball team had lost 26 consecutive SEC games. Outside of the success of Tim Corbin’s baseball program, Vanderbilt fans had little to be happy about.

Once the dust began to settle, however, it quickly became apparent that Vanderbilt Athletics would be okay, if not better, in the long run. This was because stepping into the interim job was Candice Storey Lee, the former Commodore women’s basketball player who also served under former AD David Williams for close to 20 years. The very next day, whether it was a coincidence or not, the men’s basketball team upset the LSU Tigers to earn their first conference win since March of 2018.

Lee is more than qualified for this position. She has demonstrated an unwavering commitment and passion to Vanderbilt Athletics through her years of experience both as a student-athlete and within the department. You’d be hard-pressed to find a better person to immediately step into the role than Lee, and there is a good chance that the interim title will ultimately be lifted.

Three things really stick out when you look at Lee and her resume:

16 years of experience in the Vanderbilt Athletics Department

Turner was an outside-the-box hire. The former NBA G-League president had no prior experience in collegiate athletics, and Vanderbilt took a gamble when it hired him as athletic director. Obviously, that gamble failed, as Turner departed after just over a year on the job amidst rumors surrounding his spending habits.

Running college athletic programs is hard. Running these programs at a school like Vanderbilt, an esteemed academic institution that also has to compete in the SEC everyday, is much, much harder. Lee is well aware of this. She knows all about the challenges that come with the job, such as the lack of funding, facilities and fan support. She’s seen everything. She’s been there for the College World Series wins and multiple football bowl games, and she’s been there for men’s basketball’s 0-18 SEC season and the embarrassing beatdown at the hands of UNLV this football season. She’s also been present as both Williams and Turner navigated the tricky waters of dealing with the Vanderbilt administration.

It is obvious now that, for whatever reasons, Turner was not entirely sure what he was getting himself into from a spending stand-point. Lee will not have this problem; she recognizes the politics involved in these processes.

This is not to say at all that Lee is going to stick to the status quo of what has been acceptable for Vanderbilt Athletics in the past. She knows that many things need to improve, and she will embrace that challenge and opportunity.

“I know there are some things that are unique that we have to take into consideration,” Lee said to The Vanderbilt Hustler. “But, at the end of the day, I feel like we can be successful, and we’ve had some great success in many areas. So, what we’re now working towards is sustained success across our entire portfolio so that we can show people that you don’t have to excel at one at the expense of the other.”

In October of 2018, Oren Burks and Tommy Openshaw, two ex-Commodore football players, penned an op-ed for The Vanderbilt Hustler. In this piece, one of the items they discussed was the lack of communication between administration and student-athletes. Lee, being a former student-athlete herself, will not allow this to continue to be the norm.

From her multiple press conferences, it is clear that her priority is the well-being of the student-athletes. She is fully invested in what is best for them, and she truly wants to hear their thoughts and opinions.

“I hope that I can take my experience as a student-athlete and use that as a reminder and, keep top of mind, that we are serving students,” Lee said. “Our challenge is to make sure that with every decision we make, we are keeping students at the forefront. I’m hoping that even just understanding this university, understanding this campus and having just literally been in their shoes; I’m hoping that’s going to make a difference as we serve them.”

For Athletics to really succeed, the student-athletes need to feel fully empowered, and Lee will give them a platform to do this.

The ability to sell Vanderbilt Athletics

Vanderbilt Athletics has never been something that sells itself. As the only private institution in the SEC, there are several barriers that Vanderbilt faces that its conference foes do not. The facilities, as currently constructed, are far behind those of other SEC schools, and recruiting is constrained by high academic standards. These challenges are well-documented. For many years, in fact, they’ve been used as a crutch to excuse poor play.

Lee, however, does not necessarily view these things as obstacles to overcome, but rather things that go hand-in-hand. To her, it is hard to imagine why someone would turn down the unique combination of prestigious academics and SEC athletics.

“I’ve said before that this unique proposition that is elite academics and elite athletics is exciting for me,” Lee said. “Because if we’re able to show that you can excel in both, I don’t know why this wouldn’t be the most attractive option for anybody out there. To have the opportunity to excel at the best conference in the country, at one of the best schools in the world. Who wouldn’t want that?”

The key line in the quote is “if we’re able to show.” To this point, it has mostly been a struggle to accomplish this part. Lee, however, is almost perfectly suited to illustrate all that Vanderbilt can offer.

This is because Lee is a walking representation of all that can come from being a Vanderbilt student-athlete. After graduating in 2000 with a bachelor’s degree in Human and Organizational Development, Lee, who initially only planned on being at Vanderbilt for her four years of undergraduate education before returning home, stayed at Vanderbilt and later received both her master’s and doctorate in Education.

“I thought I was going to be here for four years and then go right back down 65, and I just fell in love with this place,” Lee said. “And I, literally and figuratively, grew up here. I didn’t know exactly what it would look like when I started graduate school, but I knew I had to be here. I knew I wanted to be here, and I knew there was something special about this place.”

Because of this unique background, she knows how to authentically sell the Vanderbilt Experience. Whether it be in recruiting or fundraising, the athletic department needs someone who can really illustrate all of the perks and advantages that come with Vanderbilt Athletics, and Lee is the person to do this.

Her experiences within multiple dimensions of the university also gives her a leg-up on selling Commodore sports to the rest of the student body, a long-standing issue within Vanderbilt’s campus.

“At Vanderbilt, everyone is talented,” Lee said. “Everyone is highly motivated, everyone is competitive and everyone has something to offer. Our student-athletes happen to be able to check the box of being elite athletes, but that’s not the only thing they offer either. I would argue that the general student body probably has more in common with our student-athletes than they even know. Everybody here excels at what they do. Everybody here is uber talented, so I think that we have to look at our points of similarities versus our points of difference.”

Only time will tell if Lee will be able to galvanize a new standard for Vanderbilt Athletics. But for now, in the midst of Turner’s sudden departure, Lee appears to be tailor-made for the position.