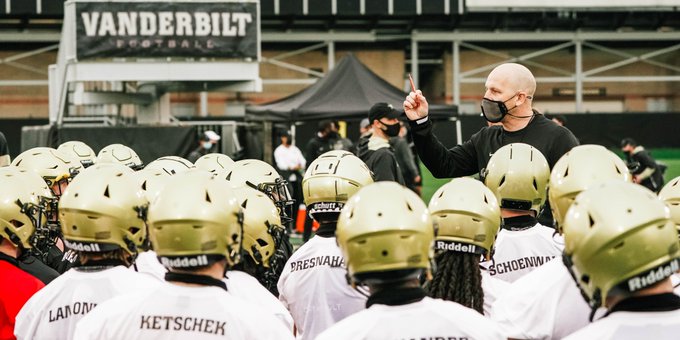 HERSHEY: The Clark Lea era is here and you should be too

A new era of Vanderbilt football is beginning this Saturday as Clark Lea is set to coach his first game. Don’t miss your chance to be a part of it.

When Vanderbilt hired former head football coach Derek Mason on Jan. 17, 2014, he was given one main job: keep the momentum.

The Vanderbilt football program was at an all-time peak that spring after James Franklin, who left Vanderbilt to be Penn State’s head coach in 2014, had revitalized a program that had appeared in just one bowl game in 25 previous seasons.

A combined 18-8 record and a pair of bowl wins in the two seasons prior to Mason’s instatement marked the peak of Commodore football’s 100-plus year existence, and he was chosen to continue growing this momentum.

Mason helped the Commodores reach two bowl games during his time at the helm, but—somewhat remarkably—just seven years removed from the program’s second nine-win season since 1904, Vanderbilt football plummeted to a rock-bottom in 2020 that many thought wasn’t possible.

The tortuous, what-is-the-next-bad-news 2020 season ended with a cancellation due to too few rostered players, an 0-9 record, a loss margin of nearly 23 points per game and the program’s 28th head-coaching vacancy.

After 55 losses in nearly seven seasons, athletic director Candice Storey Lee made the difficult decision to part ways with Mason.

“I think for all of us in leadership positions who have to make decisions that affect people, it does affect a number of people. That was a challenge, but I know that it was a move that needed to be made,” Lee said just days after Mason’s termination.

In a short set of unsuccessful years, the Franklin era that demonstrated winning at Vanderbilt is in fact possible was so quickly forgotten on campus. Year after year the name of the game became survival for Vanderbilt football: squeak out at least one SEC victory to avoid embarrassment—which Mason failed to do on two occasions and barely achieved on two others.

But thanks to Lee’s forward thinking, a new regime is at the controls of Vanderbilt football and the narrative of survival has finally died. When Vanderbilt hired new head football coach Clark Lea on Dec. 14, 2020, he was given a job arguably more difficult than Mason’s: build momentum from scratch.

The first-year head coach has slowly begun doing that over the past nine months and for the first time, it will be on public display this Saturday at 7 p.m. CDT when the Commodores battle the ETSU Buccaneers at Vanderbilt Stadium. Don’t miss your first chance to be a part of the Clark Lea era.

A cookie-cutter approach to on-field play calling and lack of off-the-field ingenuity and charisma tainted the Mason era year after year. But now, enter Lea: a thoughtful, insightful, Tim Corbin-esque figure who has shaken McGugin Center in more ways than one during his short tenure.

From hiring Barton Simmons—a former 247Sports recruiting analyst—as his general manager, to instituting an “earn your number” campaign that sent uninformed national media outlets into a tizzy, nothing this former Vanderbilt graduate does is cookie-cutter. And if that doesn’t represent his school, then I don’t know what does.

“I think it’s important at this point to recognize the fact that in this first iteration of Vanderbilt football—what we affectionately call in our building ‘Team One’— the overwhelming majority of players were recruited to a program that no longer exists,” Lea said at SEC Media Days. “I return to Vanderbilt with a simple mission: to win.”

Scraping away the past in favor of a new, winning culture isn’t easy, and many factors go into actually achieving the levels of success Vanderbilt fans are hungry for. Internally, Lea has been charged with holding a group of players and an athletic department to new standards in the same buildings, stadiums and fields that have so often reeked of football ineptitude. That is no doubt a challenge, but one Lea works for each and every day.

“The challenge of holding people to different standards and expectations in the same spaces that they occupied before is real. Everything they confront needs to be different, and we can’t be afraid to be drastically different,” Lea said. “It’s a relentless job. It’s a job that takes constant time and attention. But it’s also one of the most rewarding experiences at this point in my life.”

Through the last seven years of—mostly—painful Vanderbilt football, fans have held the school, the team and the athletic department accountable. Packed stadiums of opposing fans, frequent negative Twitter discourse and an empty student section have sent plenty of clear messages to the administration. But evidence of university commitment continues to surface each and every week, leaving commitment from the Vanderbilt fanbase as the next defining step in moving this program forward.

Since Lea arrived on campus in December 2020, Lee and Chancellor Daniel Diermier have delivered consistent, forward-looking news through the Vandy United campaign—a $300 million investment into facilities and spaces on campus that student athletes occupy each and every day.

“We’re in lock-step with our university and our department in our commitment to providing an experience that’s steeped in substance,” Lea said. “For this program to reach its potential and sustain success, [these facilities] are going to go a long way in making that a reality for us.”

Scattered between Vandy United and the impressive hires of Lea, new women’s basketball coach Shea Ralph, and director of track and field and cross country Althea Thomas has been the completion of new football locker rooms in McGugin Center, new fan engagement initiatives and upgrades to the in-game fan experience at Vanderbilt Stadium.

By showing up to the game this Saturday, you will be supporting something new. Something unique and cutting-edge, something built on the principles that differentiate Vanderbilt from other schools around the country.

From alumni to Nashville residents, from casual fans and to—most importantly—students, this Saturday is a chance for you to support the fresh air that Lea has provided this program.

Yes, the first iteration of free student tickets did, in fact, go to inbox quarantine folders (some things haven’t changed yet). But the players—your classmates—and Lea still want you there this Saturday, decked out in black and gold.

“We want Vanderbilt football to be a part of the student experience. We want students to be proud of this team and to get to know our team because our guys are Vanderbilt students as well and that’s important to us,” Lea said. “I’m excited [to engage with the student body]. Community is a big part of our mission here, that’s both the Nashville and Vanderbilt community as well.”

A rock-bottom 2020 campaign has sunk Vanderbilt football’s appeal lower than it might have ever been before, but there is hope inside of McGugin Center. With a Vanderbilt graduate leading the way on the sidelines and another calling the shots inside Kirkland Hall, it’s time for students, fans, alumni and stakeholders to show their excitement about the direction of this program.

“For everybody that loves this program and loves this university, this is an opportunity,” Lea said back in December. “But we have to realize that the opportunity is not the outcome. The outcome will come in our shared investment, our commitment to the work and sacrifice required to transform this program. If we do it the right way, what we will realize is that by transforming this program, we will in turn be transformed by the program.”

So allow yourself to start being transformed by the Vanderbilt football program this weekend. Show up in masses and cheer loudly, whether you’re cheering for your hometown team, your alma mater or your fellow classmates.

You never know what might continue to lead you back to West End years down the road; what might connect you to this special place and demand your attention each and every fall. It just might be meaningful Vanderbilt football in a renovated Vanderbilt Stadium with a Commodore fan just as passionate as you leading the charge on the sidelines every Saturday. So, show up to Vanderbilt Stadium this Saturday and say you were a part of the first game of the Clark Lea era.