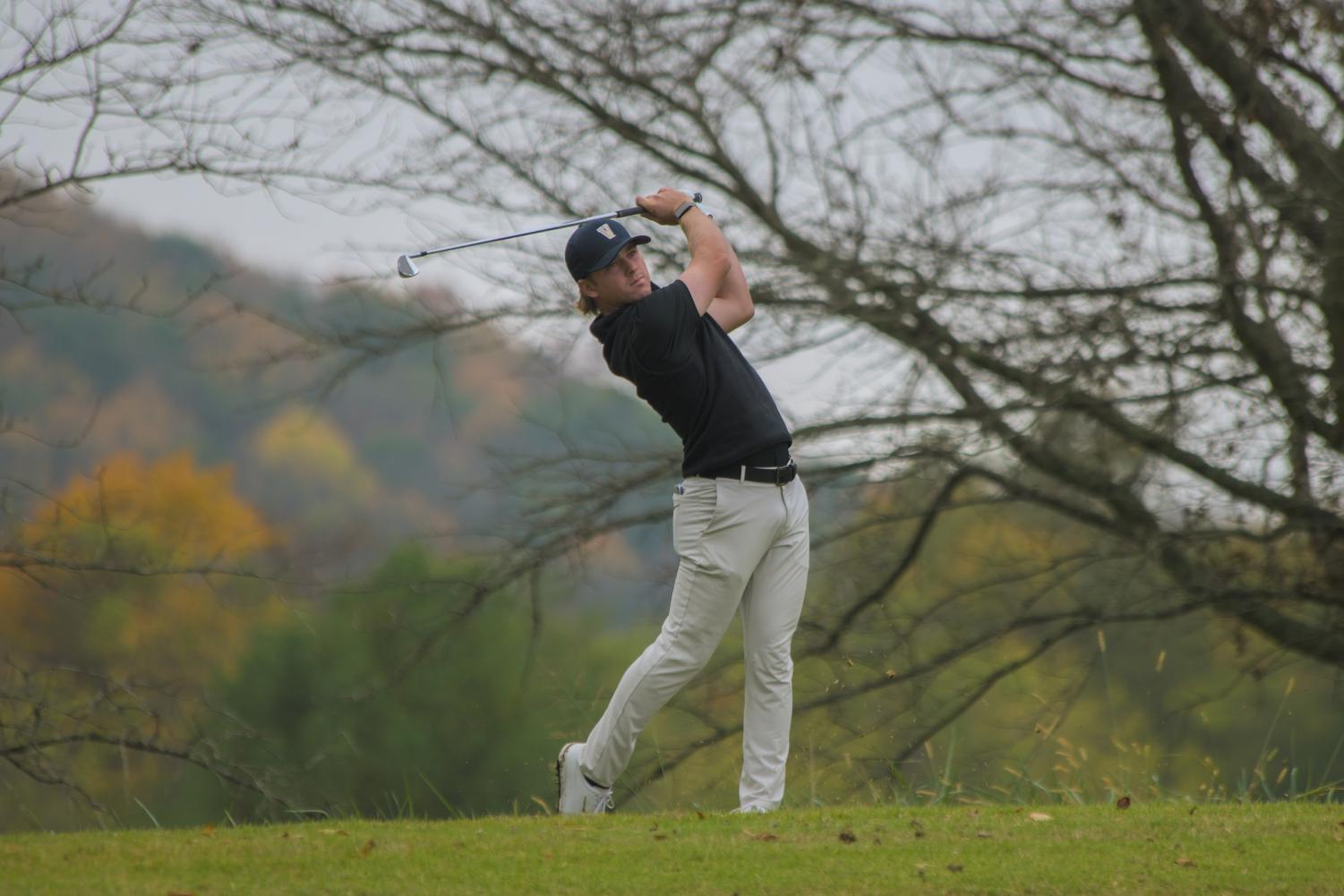 After an historic collegiate career, the reigning SEC Player of the Year will now play at the professional level.

“I have decided it is time for my story at Vanderbilt to end. I will begin my professional golf career moving forward.”

In a thank you letter addressed to “Vandy Nation,” men’s golfer John Augenstein announced that he is leaving the program after a storied four-and-a-half years of representing the Commodores.

Instead of completing the 2020-21 collegiate season, the fifth-year senior believes this is the right moment for him to take the next step.

Augenstein is grateful for the support he has received from his coaches, friends, teammates and fans throughout the years, and he hopes they realize he appreciates them.

“I’ve given everything I had to Vanderbilt golf and I love the program so much,” Auguenstein said. “But at the end of the day, it was just time for me to move on.”

In Augenstein, Vanderbilt is not just losing any player—it’s losing a program legend. As the No. 1 high school player in Kentucky, he was the recipient of the Steve and Nicholas Zeppos scholarship in 2016. Through his first four seasons with the program, Augenstein was named 2017 SEC Freshman of the Year, 2020 SEC Player of the Year, 2020 Haskins Award Finalist and an All-American four times.

He scored over a dozen top-ten finishes—including in the 2018 and 2019 SEC Championships and the 2018 NCAA Championships—and six top-five finishes. He won an individual title at the 2018 Mason Rudolph Championship and at the 2020 Desert Mountain Intercollegiate, finished runner-up at the 2019 U.S. Amateur Championship and has represented the US National Amateur Team twice. Augenstein also owns the second-lowest career scoring average within the program.

For four years, Augenstein was an elite college golfer, all while playing in the most competitive conference for men’s golf. His numbers and accolades are unparalleled.

Unfortunately for the Owensboro, Kentucky native, he did not get the final semester he wanted and deserved. Because of the COVID-19 pandemic, the 2019-2020 men’s golf season was canceled in March, just before Vanderbilt could play in the SEC and NCAA championships.

Initially, that seemed like the end of Augenstein’s collegiate career, but because of updated eligibility rules, Augenstein had the opportunity to come back for another year.

After dealing with the shock and pain of having his senior year upended, Augenstein faced a difficult choice between following his dream of professional golf or returning for his fifth season. With all the uncertainty surrounding the professional level, Augenstein chose to once again represent Vanderbilt, a decision he will never regret.

“Coming back and playing this semester was an awesome decision,” he said.

In a 2020 fall season that has been impacted by the pandemic, Augenstein finished tied for 13th at the Blessings Collegiate Invitational and second place—one stroke behind the leader—at the Vanderbilt Legends Collegiate.

These two tournaments helped prepare Augenstein for what would be the biggest event of his career: the 2020 Masters Tournament at Augusta National.

Playing amongst the best players in the world, Augenstein finished tied for 55th at three over par. While Augenstein was disappointed with his final two rounds, he was proud of his overall performance.

“That’s part of the learning curve of going to the next level,” he said.

Augenstein is one of three Vanderbilt golfers to have ever played the Masters as an amateur, but the first to do so under current men’s golf head coach Scott Limbaugh.

“[I was] super thrilled for him to be able to have that kind of experience to end his amateur career,” said Limbaugh.

Out of the millions that tuned in to watch the Masters, no one enjoyed following Augenstein more than coach Limbaugh, who says that the Vanderbilt golfer is like a son to him.

“[Jonn’s] definitely special to me to say the least,” coach Limbaugh added.

Augenstein feels the same way, stating that outside of his parents, Coach Limbaugh is one of the closest people in his life.

“He’s the best coach in the country,” Augenstein said. “He’s created this culture in Vanderbilt golf of a family and there’s a reason we have great teams every year.”

This “family” within the golf program is what Augenstein says he will miss the most, citing all the team retreats where teammates developed bonds with one another.

“Those are probably the memories I’ll hold closest to my heart,” he added.

Ever the competitor, Augenstein’s greatest on-the-course memory is winning the SEC Championship his freshman year, when he made a putt to send the team to the finals, before winning the last match over 23 holes to clinch the title.

Coach Limbaugh recalled a memory from Augenstein’s second season when, after a disappointing finish at a tournament, the then-sophomore had a conversation with his coach about dealing with expectations.

“I just remember how much he cared and him not complaining, not making excuses,” Coach Limbaugh said. “But just saying, ‘I gotta demand more of myself.’”

This semester, Coach Limbaugh trusts that Augenstein’s presence and leadership will have been a major boon for the team going forward.

“For them to get to learn more, to grow from him, to watch his work ethic, to watch his care level,” Coach Limbaugh said. “[That] was huge for our young team.”

Augenstein also saw this as an opportunity to help the younger team members grow and to continue developing relationships with them.

“When you’re talking about having a culture of excellence and of competing and of caring and of making good decisions and of moral toughness,” Limbaugh said. “I just think John’s touched on all parts of our program in that sense.”

Augenstein’s impact on Vanderbilt golf is undeniable and his legacy is secure as one of the greatest to carry a club while wearing the black and gold.

“I started thinking about my legacy at the back end of my senior year,” Augenstein said, acknowledging that he avoided considering it while competing.

“His legacy goes above and beyond all the accolades,” according to coach Limbaugh. “His competitive character and his burning desire to be great and to compete is something that I think will be the legacy he left—that true burning desire to compete.”

Now that this chapter of Augenstein’s career is over, he is focusing on dealing with his off-the-course requirements before starting to play in late January.

Augenstein is seeking exemptions to play on the PGA Tour, as he hopes to score well enough to turn those exemptions into a PGA Tour card “within the next year.”

One of the most difficult elements of transitioning from the college level to the professional level is the lack of structure, but Augenstein says that the men’s golf program helped prepare him for that.

“I’ve devised a plan for myself each and every day starting middle of my sophomore year,” he added.

He has also kept in contact with other Commodores who are currently pros such as Will Gordon and Matthias Schwab, among others, and he says that he is not shy about asking for advice.

“Anybody that I think does something really well, I wanna know how and why they do it,” Augenstein said. “I do think I’m ready for that and I’m excited to get going.”

After making the most of his four-and-a-half years at Vanderbilt, Augenstein is proud of what he accomplished and is eager to compete with the world’s best.

“One of my ultimate goals coming into Vanderbilt when I was a freshman was to be the best Vanderbilt golfer ever,” Augenstein said.“We’ve had a lot of great players and I’m just very fortunate and thankful that I was able to make an impact on the program. I know that they’ll continue that trend for sure.”

Coach Limbaugh believes that a player’s greatness should be measured by asking, “What did you do with the gifts you’ve been given, how did you affect the people around you, how did you change things, and how did you impact your teammates?”

“John left a legacy of doing all of those things in a really positive way,” he continued.

Reflecting on his career so far, Augenstein is certain about one thing.

“Committing to Vanderbilt was the best decision I’ve ever made.”